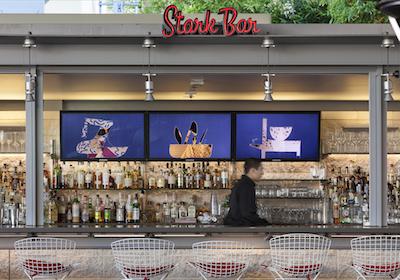 LACMA's Rita Gonzalez and Erin Wright recently invited artist Brian Bress to show his work at LACMA's Stark Bar, which features a rotating program of video and time-based media. The piece, titled Idiom (Brian, Raffi, Britt), is a high-definition three-channel video. Three different “characters” are depicted, which show Bress’s interest in the ambiguous zone between figurative representation and abstraction. The characters fill the screen, slowly emerging and revealing themselves to the viewer. 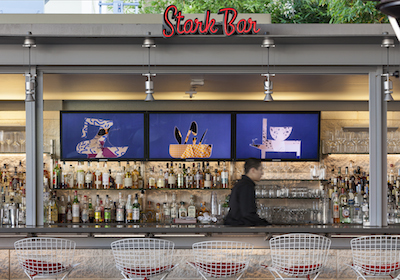 Bress plays against the expectations of moving-image work by offering his inventive portraits on flat- screen monitors encased in frames. The slow-motion actions on the screen make his work appear as conventional photographs, or even paintings. Through the use of masks and costumes, Bress’s images depict one or more figures in the abstract. They have been described as inventive, humorous, and “discomfortingly complex.”

Erin Wright and Rita Gonzalez: Let’s start by talking about your studio. You work in a dense, active space in which you’re surrounded by an emporium of the costumes, sculptures, and props that have populated your work over the past almost 10 years of your practice. How has that workspace influenced the choices you’ve made in your videos and installations? 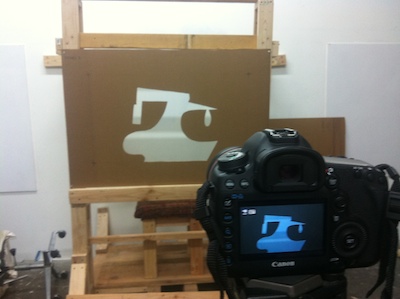 Brian Bress: I'm wrapping up four years in my current studio, and I'm about to move into a larger one, so the idea of how the space I work in changes the work I make has been on my mind. In my current studio, I've been mostly restricted to small sets that can contain the upper body of a costumed performer— though like many constraints that artists face, it's turned out to be a helpful one, as it's forced me to consider and focus on portraiture and smaller, more intimate performances. 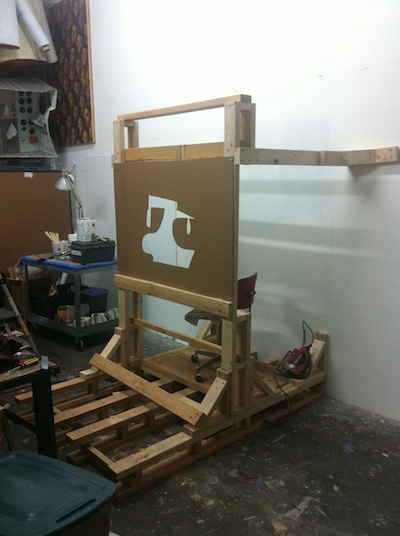 And keeping the props and costumes around the studio is a way of having a sort of physical timeline of past works sitting on the shelves as a reminder of how things have evolved. That timeline is simultaneously a challenge to try different things and a reminder of solutions and ideas that might be worthy of further exploration.

Wright and Gonzalez: Has knowing that your work would be in such a publicly accessible space had an impact on your approach for this commissioned project?

Bress: The type of broad access that a piece gets in the Stark Bar is different from the type of access it would get only a few feet away inside the walls of the museum. But knowing that the work would be in such a publicly accessible space didn't change the kind of work I was going to make. There are physical qualities of the space that I took into consideration, however. 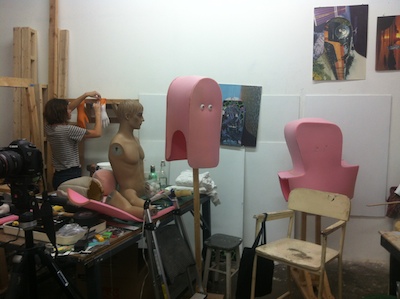 Wright and Gonzalez: How did the idea for Idiom evolve as you went through various scenarios for using the three monitors in the Stark Bar?

Bress: As ideas for the work developed, I began to think about the advantages the three monitors in the bar/cafe setting offered. Initially, I wanted to make a very different triptych that used masks based on collages, with performers wearing the masks while acting out synchronized movements. But the masks for that piece were all a monochromatic grey, and I was afraid the subtlety of the forms and qualities of the masks might be lost in the given context. And the more I noticed the far distance from which you could see the monitors, the more I considered a more graphic approach to the image. I decided I wanted to work with broad shapes that were readable from afar and that revealed the method of their construction not only through the time a viewer spent looking at them, but through the space leading up to the bar as the viewer came closer to the monitors.

Wright and Gonzalez: You mentioned that your recent residency in Rome [at the Museo d’Arte Contemporanea, Roma (MARCO), in the spring of 2013] and the work that came out of it were on your mind as you developed this project. Can you tell us a bit about that body of work?

Bress: That residency was another opportunity for me to make work specifically for a museum context and to know exactly where the work would be seen. It wasn't quite site specific, but it was in conversation with the space. [At LACMA], I took that attitude about being in conversation with the space of the museum and the existing architecture, and decided to consider elements around the bar and the museum—from the bar’s red and white chairs to the shows that would be up at the museum at the same time.

Wright and Gonzalez: What's intriguing about Idiom is how the video uses a reverse form of green screen. Rather than keying in a background using green screen technology, you produce a flattened foreground with the reveal being a backdrop that suggests an animated setting. What is your interest in animation and special effects? Can you talk about the process of making these videos and your use of real-time action with costumed performers?

Bress: My background is in animation. I have a love of drawing and watching drawings move on screen, and this piece follows other pieces in which the viewer gets to watch drawings evolve and "animate."

And it’s really interesting that you mention green screen. That’s a technology to which I'm not a stranger, and that I've used a lot in other types of videos. But I'm always trying to figure out how to avoid it—or, more to the point, how to replace it with practical, in-camera effects that could, in the end, be more special and unique to the process than an effect whose "magic" is tethered to a technology that we all know, and whose mystery is, in my opinion, therefore lessened. The other benefit to using practical effects instead of VFX done with a computer is that, for me, there's a sense that nothing is filtering the experience of the performance, therefore maybe just generating enough trust or interest to keep a viewer invested in watching what feels like an authentic document.

Wright and Gonzalez: Idiom is up during our Turrell and Calder exhibitions [James Turrell: A Retrospective, through April 6, 2014, and Calder and Abstraction: From Avant-Garde to Iconic, through July 27, 2014]. Did the presence of these exhibitions influence your approach?

Bress: When I shifted to the cutting/more graphic approach to this piece, connections to the work in those shows became obvious. However, I think the approach I took was more allowing those shows to have a passive influence on what I was doing, rather than consciously going through the shows and the works of Turrell and Calder and picking out moments to parrot. And in hindsight, the connections are even clearer than I had imagined they would be when I started.