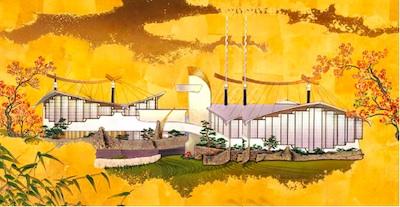 Twenty-Five Years of the Pavilion for Japanese Art

The Pavilion for Japanese Art, the last structure and only major public building designed by architect Bruce Goff (1904–1982), an idiosyncratic visionary influenced by the organic designs of Frank Lloyd Wright, divided critics when it opened on the Los Angeles County Museum of Art’s campus on September 25, 1988. William Wilson, head art critic for the Los Angeles Times, who had eyed the building’s construction “with itching anxiety,” was ecstatic with the end result, calling it a “beautifully balanced architectural solution not rational T-square logic but romantic logic on the order of that exercised by Antonio Gaudi, Paolo Soleri, or Simon Rodia.” Other critics likened the pavilion’s shape, with its convex triangular walls and tusk-like exterior beams, to that of warrior helmets, dinosaurs, mastodons from the adjacent La Brea Tar Pits, ships, and giant shells. 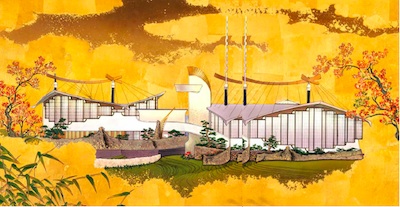 Illustration of the Pavilion for Japanese Art

Twenty-five years later, a silent verdict seems to have been issued by the pavilion’s status as a destination site for L.A. residents and visitors. With its colorful history, its unusual, daring, and poetic forms, its unconventional materials, and the utterly unique art-viewing experience it offers, the pavilion has become a fixture at LACMA, a respected structure that three Pritzker Prize–winning architects—Rem Koolhaas, Renzo Piano, and most recently, Peter Zumthor—have deliberately preserved in their respective master plans for the museum’s renovated campus. The 32,100-square-foot pavilion is a three-level building comprising two wings with exhibition galleries, a study area, a library, offices, and storage areas, with the west wing devoted to changing exhibitions, works from LACMA’s permanent collection, and a netsuke gallery to display the Raymond and Frances Bushell Collection of nine hundred exquisite nutshell-sized Japanese sculptures. The east wing was designed for the traditional display of Japanese screens and scrolls, in tokonoma, or traditional viewing spaces, for which the pavilion was originally conceived. 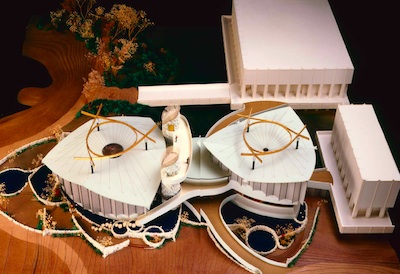 Model of the Pavilion for Japanese Art, © Museum Associates/LACMA

The story begins in Oklahoma, years before the project broke ground at LACMA in 1985, Goff and his foremost client, collector Joe Price, had discussed building a gallery at Price’s Oklahoma estate to hold the collection of Edo-period work Price had amassed throughout the 1950s and ’60s, widely considered one of the finest in the Western world. Price’s stipulation was that the “art itself” would be the client, dictating the design of the building from the inside out, with scrolls and screens displayed as the original artists intended: under natural light, with each work hung in its own tokonoma, or alcove—quite different viewing conditions than for contemporary Western art, which often calls for large spaces and bright, uniform lighting. 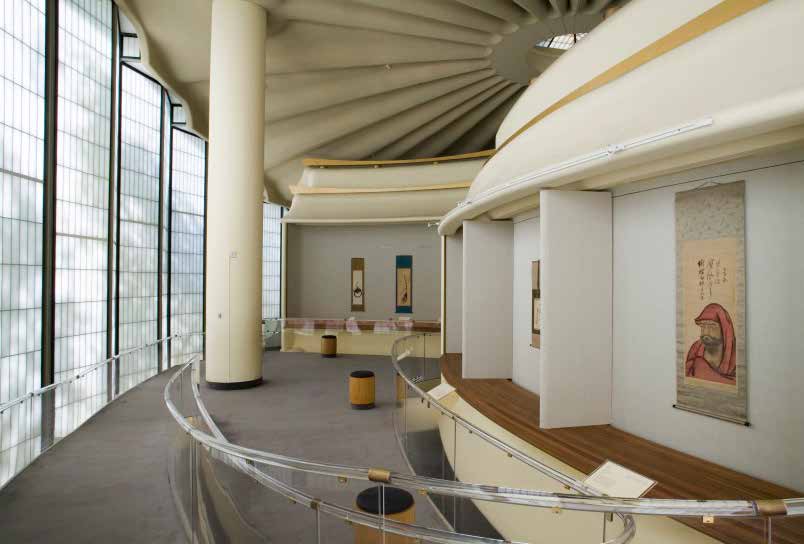 Interior of the Pavilion for Japanese Art, © Museum Associates/LACMA

Ultimately, Price decided to open his collection to the public, and—with several twists and turns along the way—the site was relocated to Los Angeles, where LACMA was undergoing a major capital campaign under the guidance of Earl "Rusty" Powell. Longtime trustee Camilla Chandler Frost led fundraising efforts for the creation of the new building. When Goff died, in 1982, the building was yet to be realized. It was Bart Prince, Goff’s disciple, who meshed Goff’s imaginative plans with the reality of the LACMA site’s many challenges, which ranged from an absence of bedrock to a necessity to vent methane gas from the La Brea Tar Pits to stringent California building and seismic codes, not to mention the delay in construction caused by the new discovery of prehistoric fossils beneath the foundation.

The exterior walls of the Pavilion for Japanese Art are made of Kalwall, a translucent material that permits light to enter a room much the same way a shoji screen does, varying according to time of day, weather, and season, making the movement of the sun and clouds noticeable on the works; the gentle spiraling ramp and petal-like viewing platforms that give the viewer a sense of climbing through a garden, glimpsing art from above and below; the soft shadows that gather in the space and the building’s cream, gray, and green colors reminiscent of clouds, stones, and leaves, provide a contemplative space in the heart of Los Angeles. The Pavilion for Japanese Art remains a quiet space—a house of tranquility, as its creators intended. 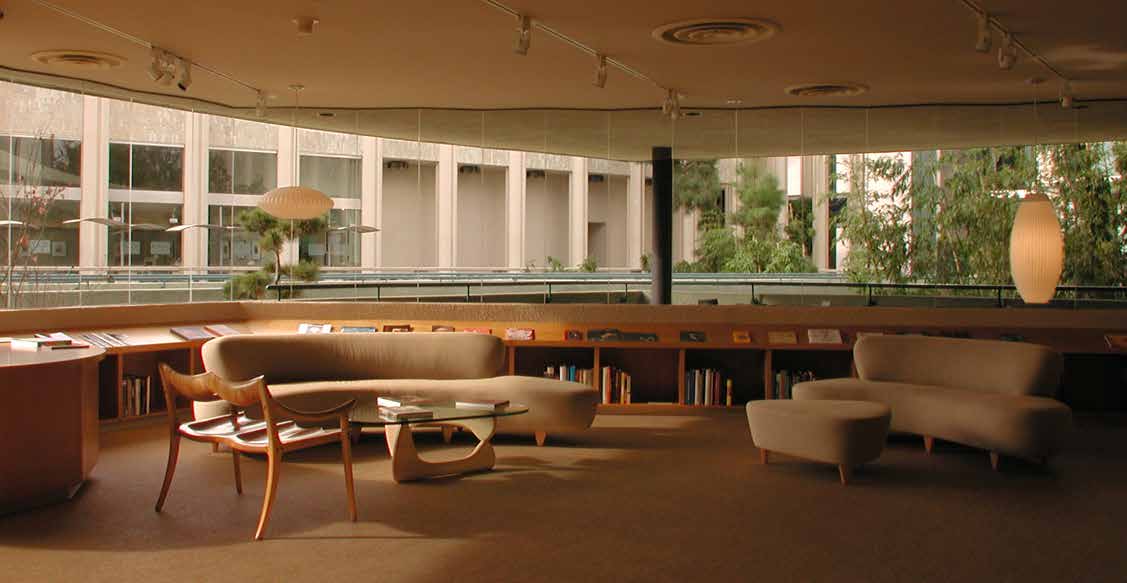 Interior of the Pavilion for Japanese Art

To celebrate the pavilion’s twenty-fifth anniversary, LACMA will present a special exhibition, The Color of Life: Japanese Paintings from the Price Collection (opened this past weekend), comprising a selection of Japanese paintings from the renowned collection of Joe and Etsuko Price. In 2013 this exhibition traveled to three cities in the Tohoku region of Japan, which was directly impacted by the great earthquake and tsunami of March 11, 2011. The exhibition was a gesture of solidarity and support for the citizens of the Tohoku region, and was greeted with enormous gratitude and enthusiasm in Japan. LACMA is honored to share this exhibition with our many visitors. Consisting of masterpieces by such artists as Itō Jakuchū, Nagasawa Rosetsu, Maruyama Ōkyo, Suzuki Kiitsu, Sakai Hōitsu, and Kawanabe Kyōsai, the exhibition will be shown in two rotations, the first from February 1 through March 9, 2014, and the second from March 15 through April 20, 2014.

A version of this article originally appeared in the winter 2014 (volume 8, issue 1) of LACMA's Insider.