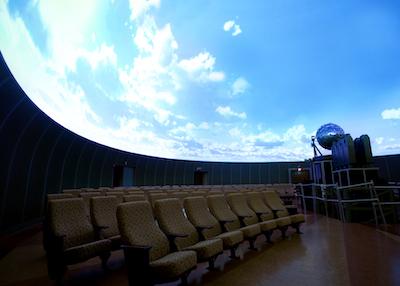 Although I slipped into James Turrell’s Light Reignfall Perceptual Cell at LACMA five months ago, its obvious connection to Griffith Observatory’s Samuel Oschin Planetarium did not cross my mind until I experienced another Perceptual Cell in Yucatán a week ago. Planetaria and Perceptual Cells both use domes. These two different domains of light, however, do very different things with them. 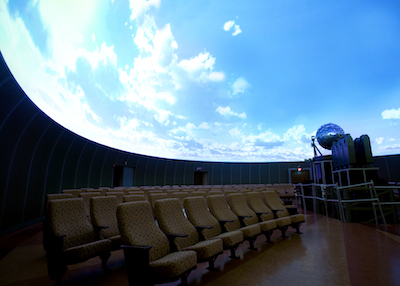 Nonetheless, the initial immersion into the Perceptual Cell—before the perimeter lights ignite the eyes—recalls the effect we so deliberately designed and executed into the Samuel Oschin Planetarium. We want people to feel they are outside under the sky even though they are indoors in a very contrived room. That means the planetarium dome must be perceived by every person in the audience as pristine, luminous, and remote. Architecture and lighting must conspire on behalf of a blue celestial realm an indeterminate distance away. The vault has to distract the eye from the floor, the circular wall, the furniture, and the instrument, and from everyone else in the room, and persuade everyone there is no ceiling, just an infinite dome of sky.

This is not easy. The dome is 75 feet in diameter, and big domes are usually compromised by the materials and structures required to build them. A visit to almost any other planetarium in the world will confirm the hard truth under the dome. The illusion is betrayed by the construction. The visible artificiality of the dome prohibits the suspension of disbelief. The frame of the dome and the panels of its surface intrude on the projected imagery and remind the viewer the dome is solid: a screen, not an environment.

Unlike most modern planetarium domes, Griffith Observatory’s original planetarium induced the uplifting “cathedral effect” with a smooth plaster canopy constructed in 1935. I was troubled, then, by the dome demolition and replacement that theatrical impact and new technologies required as part of the Observatory’s major renovation and expansion, completed in 2006. I was reluctant to introduce visual distractions into a room that depends on artful deception to immerse people into an artificial but persuasive sky, but I had no choice.

Then, when we most needed innovation in dome fabrication, it was unexpectedly and cheeringly developed by Spitz, a dome manufacturer.

This new dome technology was a necessary, but insufficient, condition. Sophisticated lighting is also required, but most planetaria don’t get it because audience perception of the soaring vault is not usually incorporated into planetarium production values. In most planetaria, the dome is treated as a surface, but it should be a habitable place. 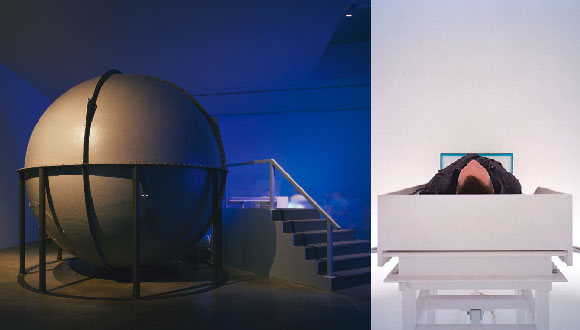 James Turrell’s Perceptual Cell domes are smaller than Griffith Observatory’s planetarium but exquisitely crafted to create the same initial response. Once inside, the reclined observer has a sense of horizon. The eyes and brain, however, transform the space into something indeterminably larger. In Light Reignfall, even my feet seemed very far away in light that seemed tangible. Although the space is completely transparent, the ambient interior light conceals the dimension it illuminates. It’s a good spherical surface, and the inverse-square law of brightness offers no hints of its true extent.

Once the program in a Perceptual Cell gets underway, its alliance with the planetarium dome ends. The content on the planetarium dome persuades the audience it is looking out into the universe. In the Perceptual Cell, the geography is indeterminate, and the content is abstract. People see something that resembles phosphenes, those sensations of colorful shapes and patterns in the non-visual field of view that are generated by pressure on the retina or other non-luminous stimulation.

A review of online commentaries by those who have experienced Light Reignfall in Los Angeles confirms the ambiguity in depth perception. Many report they could not tell where these kaleidoscopic, luminous, and colorful patterns originate—outside the eye or in, and in fact, it’s both. The stroboscopic display onto the dome from the perimeter lights exploits the neurophysiology of our optical apparatus and brain. Photographs of the interior of a Perceptual Cell in operation reveal at most a partial wash of a single color and none of the complex and dynamic effects the participant experiences. What people see is not on the dome but in the brain, and I believe much of the action involves intricate manipulation of retinal afterimages, an effect generated by the retina’s photoreceptors. Audiotones are also used to move the mind into these luminous and geometric visions.

In Light Reignfall, I primarily sensed streaming rivulets and flowing cells of multicolored light pouring down in every direction from the zenith in my field of view. The pace of change in color, brightness, and texture was strong and rapid, and ranged from showers to torrents. Despite the fundamental visual theme, I also retain the memory of rich and frequent variation and of shifts from and back to the primary trend.

The Metasphere in Yucatán produced generically related imagery, but it differed greatly in detail from Light Reignfall. Geometric figures—especially a honeycomb of hexagons delineated in concentric colors—dominated my mind’s eye. When I closed my eyes, the same lattices were apparent, but colors changed and intensity diminished. There were also episodes of laminar flow and a distinct impression of a dark spot—a black hole—in the middle of the patterns, about halfway up the “sky.” Even though these effects are not phosphenes, they seemed even more like them. Phosphenes for me, however, usually play out on a distinctly black background that was not as evident here.

I remain amused by the liability release, the helpful female technicians in laboratory attire, the panic button, and all of the other ornamental elements of LACMA’s Perceptual Cell installation. A venture into the continuous and commonplace operation of the eye and brain is staged as an expedition into unknown territory, and in fact, as under the planetarium dome, the destination is infinity and beyond.

E. C. Krupp is an astronomer and the Director of Griffith Observatory. He will be in conversation with LACMA CEO and Wallis Annenberg Director Michael Govan on Tuesday, February 18, at 7:30 pm, as part of the Director’s Series. Reserve your tickets here.