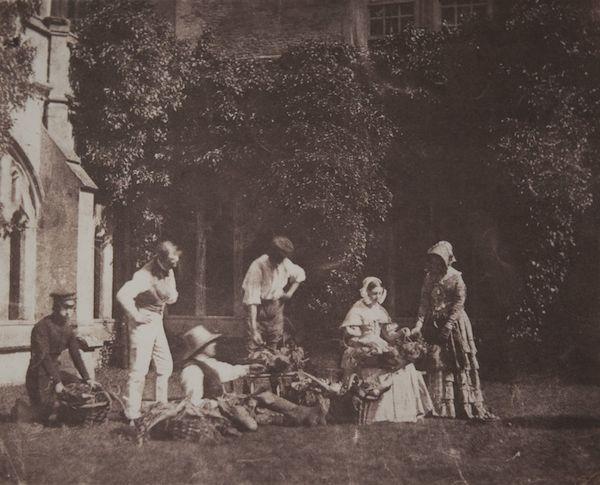 Before It Was Art

Photography is a ubiquitous part of our modern world. And art, itself, has so breached every aspect of our seeing that to imagine that the earlier photos weren’t considered art seems unthinkable. And equally so, it would have thrown into question the very nature of how photography has informed our ideas of beauty, information, and reality itself.

The exhibition of See the Light—Photography, Perception, Cognition: The Marjorie and Leonard Vernon Collection is a beautifully conceived adventure and journey through science and art. The show provides a unique and transformative focus to which I am drawn. Of course, photography was not always considered art. Its birth through technology and science would alter the nature of what was accepted as creativity. At the Salon of 1859, Charles Baudelaire stated, “As the photographic industry was a refuge of every would-be painter . . . too ill-endowed or too lazy to complete his studies, this universal infatuation bore not only the mark of a blindness, an imbecility, but had also the air of vengeance.” But of course there were others who saw its profound social implications, and how it echoed the new age. Lady Elizabeth Eastlake, wife of Royal Academy director, wrote in Quarterly Review in 1857, “photography is made for the present age, in which the desire for art resides in a small minority, but the craving, or rather the necessity for cheap, prompt, and correct facts in the public at large.” Science was to be its authority. To quote Britt Salvesen’s beautifully concise description, photography is “a dream of the mechanical transcription.” Though it must be said that even earlier, at Crystal Palace, in London, in 1851, the exhibition had “established looking as a form of consumption.” 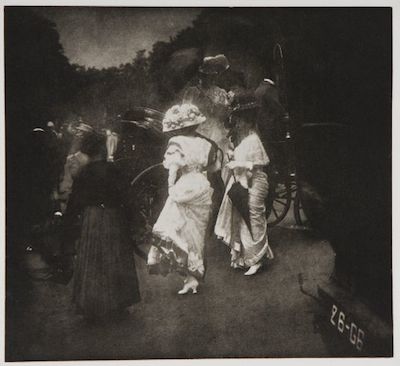 In a very real sense, photography and art were inextricably the phenomenon of perception, and the exhibition’s survey of the science of seeing suggests an evolution and clarification of visual understanding. And yet, the notion of factual accuracy would shimmer in its own radiant presence without the label of art. It is these early images, which merely capture an enduring moment in time, that most interest me. For me, this is a past without artifice—a deep past where the very nature of the lives they were living is palpable, in spite of a mountain of literature and paintings. In the Edward Steichen’s Steeplechase Day, After the Grand Prix, Longchamps Racetrack—Paris (1907), the beau monde is caught in mid-action. There’s an energy, which is utterly tactile in the mesdames’ gathering of their sumptuous white frocks as they prepare to stroll.

The swish of fabric can be sensed in their steps, their aristocratic gestures, with Proustian airs and expectation, just behind the black-lace veil and umbrella, their white shoes, their flowered and netting-festooned wide brim-hats demand our attention. The image bristles emotion; a kind of kinetic energy of reality—one can practically smell the fresh dirt and perfume. They are moving around the carriage’s large back wheel, and the servant in the foreground recedes as if in the clutter of grays and blacks of background. The mesdames in their world of detail and anticipation, are locked in time. And for those split seconds, a way of life is illuminated—it’s alive. It is not a movie still; it is a photograph of fact. 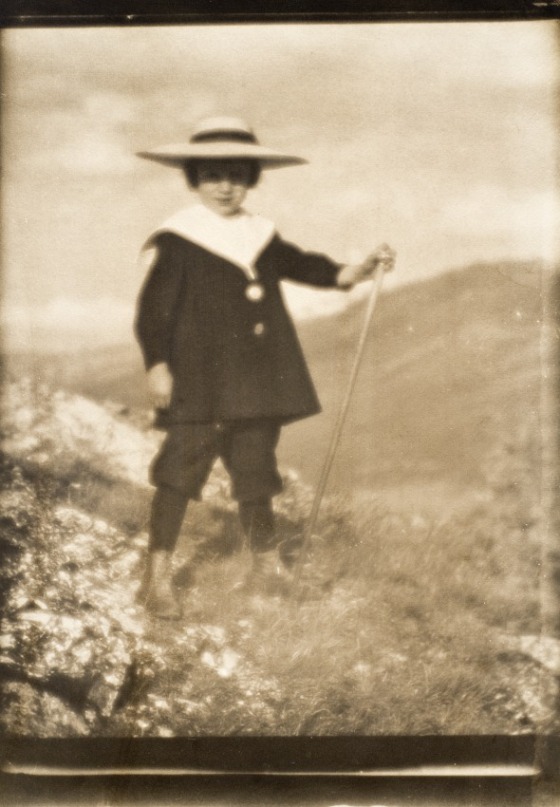 Maybe it is the clothing, the uncontrived there-ness that the earlier images possess, for we know the science could be exhaustively involved. Heinrich Kuhn’s Hans Kühn (1906), features a boy, in white collar, standing wide legged in black-flared shirt and knickerbockers, with his father’s walking cane with a silver ball top sparkling in his hardly visible fingers. The perfection of the wide-brim hat shading his eye, but not the pleasure seen in his mouth, seems to offer a kind of sweet authority. Wild flowers scattered around his leather high tops and the sense of the spring walk in the countryside gives the viewer an entry into the image, and in spite of its overall softness and the craft of printing, there’s slight time travel, so to speak, as innocence prevails. 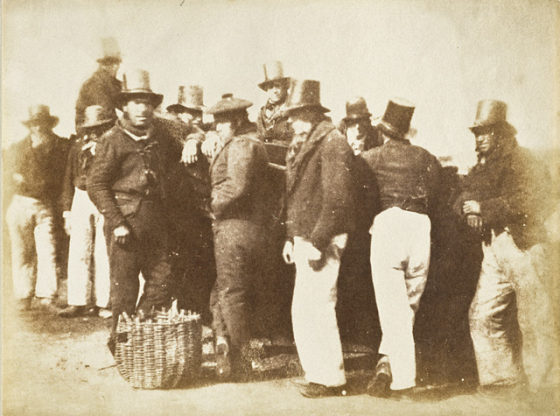 From the beau monde, to innocence in a country field, to David Octavius and Robert Adamson’s Newhaven Fishermen (1845), salt print of the weather-beaten demeanor of fishermen in their stovepipe hats and broad frames, all the photos in their moments expressing a realness that sits solidly in the early present, connecting us in a time-honored fact, or truth, like nothing else. As we go back in time, these images of a bygone era, where science and the practitioners have laid before us what on the surface seemed simple, but in truth, were profound philosophical and physiological developments. A host of psychological investigations were spawned over the nature of the subjective and sensation, the very structure of consciousness in the picture making—or Pictorialism, the term of the day, was made the center of attention. Of course, when considering that some thousands of years of understanding was the background for all that followed, one should hardly be amazed. Nevertheless from the position in viewing them now, it’s as if the very nature of perceived image in this mechanized form, photography, has within it an organizational beauty that needs no affirmation. It created its own idiomatic aesthetic. It added another dimension to the human perception and with it an entirely new equation of perceived beauty, memory and reality, a reality whose democratic reach was beyond the imagination. I would say that photography was the brave new world. Or as Robert Demachy, a leading French representative of the new direction said, “We have slipped into the Temple of Art by a back door.”