Few architects of any period command the reverence that surrounds Charles Rennie Mackintosh; he was the most renowned designer Scotland has produced. And while his genius in creating both buildings and their furnishings has been internationally acknowledged (LACMA was a venue for the comprehensive 1996 exhibition of his work), his contributions to other media are not as well known. Mackintosh’s 1896 poster for the Scottish Musical Review is the best example of his accomplishments in graphic design.

The mid-1890s were central to Mackintosh’s development as an artist, architect, and designer. This is the period when he often collaborated with three Glaswegian artists he had met while taking art classes at night: Margaret Macdonald (whom he married in 1900), her sister Frances, and Herbert McNair (whom Frances married in 1899). So close was their association that they were called The Four; working both independently and together, they created some of the most innovative, provocative designs at the turn of the century, strongly influenced by Continental symbolism and the Celtic revival.

The work shown by The Four at galleries in Glasgow, London, and Vienna was characterized by images of unconventionally attenuated female figures, sinuously curving plants, and esoteric references to decay, transformation, and renewal. While the most progressive critics admired the artists’ watercolors, posters, metalwork, and furniture, the majority described them as “ghoul-like,” “weird,” and “hellish,” earning for the group the moniker “The Spook School.” 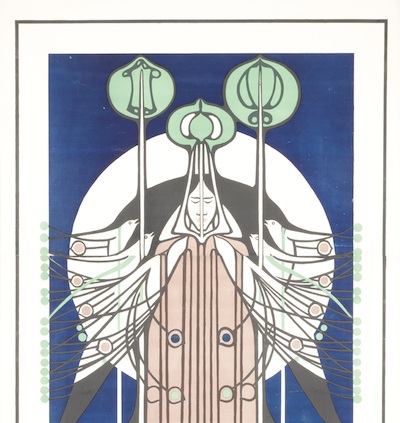 Over nine feet tall, the Scottish Musical Review is the most dramatic poster Mackintosh designed. Its central, elongated figure is androgynous and conflated with an abstract, flowering Tree of Life, an image that would be a key component in the architecture of his most famous building, the Glasgow School of Art, designed at the same time as the poster. The halo surrounding the figure suggests transcendence; the songbirds are a fitting reference to the subject of the magazine; and the purple, indigo, and green invoke the Scottish landscape. With its nationalistic color scheme, idiosyncratic lettering, and evocations of the universal life force, the poster provides a stunning example of the influential German critic Hermann Muthesius’s 1902 description of Mackintosh’s work as embodying the Scottish character itself, combining “Puritanism with romanticism . . . abstinence with mysticism.” It is also clear, however, why an otherwise admiring critic in the Studio magazine would observe that, “Mr. Mackintosh’s posters may be somewhat trying to the average person.” 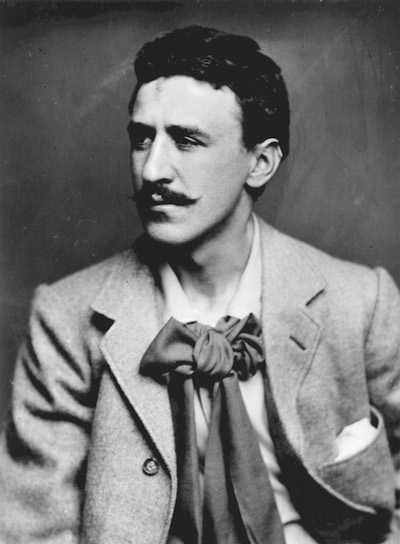 The poster is an invaluable addition to LACMA’s collection, which already represents Mackintosh’s furniture with two iconic chairs from Miss Cranston’s tea rooms, and his architecture with a complete set of lithographs from the international House for an Art Lover competition. The poster will have pride of place in an exhibition of our Arts and Crafts collection, which will tour Pacific Rim countries in 2017 before being shown at LACMA.