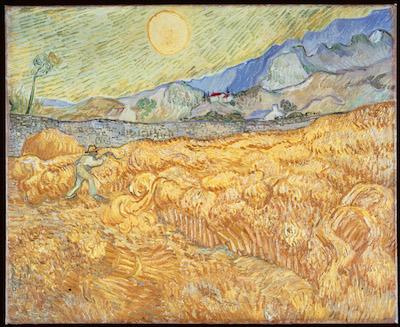 Expressionism in Germany and France: From Van Gogh to Kandinsky

Today the term Expressionism is widely considered to designate a distinctly German movement. In its beginnings in the early 20th century, however, Expressionism was not assigned to a specific nationality. The movement evolved within a lively cosmopolitan atmosphere in Europe, where German and French artists responded to new developments in modern art with brightly colored and spontaneously rendered canvases. Expressionism in Germany and France: From Van Gogh to Kandinsky, which opens this Sunday in the Resnick Pavilion at LACMA, proposes an inquiry not only about artistic influence, but also about culture and geography. Where did Expressionism come from? How did it relate to national boundaries? “Van Gogh struck modern art like lightning,” a German observer once said about the influence of this pioneering modern artist’s work on artists in Germany in the 1910s. The work of Vincent van Gogh—who died in relative obscurity 15 years earlier—was finally becoming widely available due to a network of cultural exchange between Germany and France in the form of exhibitions; burgeoning public and private collections; trade on the art market; and travel by artists, dealers, and museum directors. 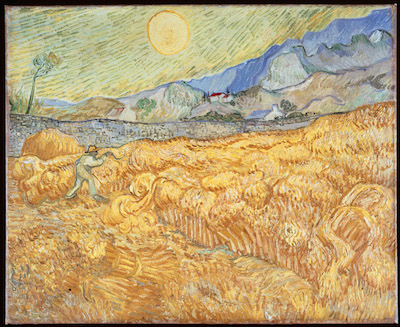 Wheatfield with Reaper (Champ de ble avec moissonneur), 1889, was the first work by Van Gogh to enter a German museum. Purchased in 1902 by collector Karl Ernst Osthaus, it was shown at his private Folkwang Museum in Hagen. The avid collecting and exhibition of works by Van Gogh, Paul Gauguin, Paul Cézanne, and others were complemented by lively critical discussions in illustrated art periodicals and books, notably publications by art critic Julius Meier-Graefe, as well as among artists through correspondence and conversation at such meeting points as the Café des Westens in Berlin and the Café du Dôme in Paris. German art dealers such as Wilhelm Uhde and Daniel-Henry Kahnweiler opened galleries in Paris and were instrumental in introducing Henri Rousseau and Pablo Picasso to the larger public. German artists Emil Nolde and Paula Modersohn-Becker studied at the Académie Julian and the Académie Colarossi in Paris, while the galleries Bernheim-Jeune, Durand-Ruel, and Ambroise Vollard offered Alexei Jawlensky, Wassily Kandinsky, Gabriele Münter, and many others the opportunity to discover not only Van Gogh but works by the Nabis, the Neo-Impressionists, Cézanne, and Gauguin, among others. 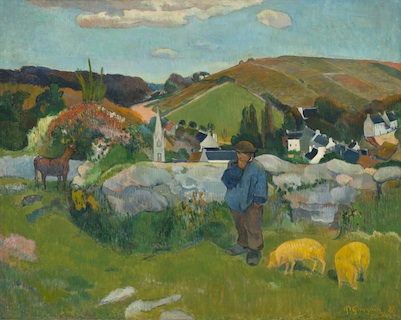 Exhibitions were especially important in exposing German artists to the most recent trends from France. Annual exhibitions such as the Salon d’Automne or the Salon des Indépendants were also an occasion to discover the work of the French avant-garde. For instance, Gauguin’s Swineherd (Le Gardien de porcs), 1888 was presented at the 1906 Salon d’Automne, which also included works by Jawlensky and Kandinsky. Beginning in the late 19th century, exhibitions in Berlin, Dresden, and Munich presented in-depth surveys of Impressionism and Neo-Impressionism. 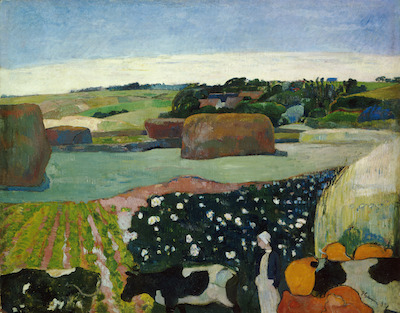 Beginning in 1904–5, around the same time of the birth of Expressionism, exhibitions in Germany also made the works of Cézanne, Van Gogh, Gauguin, and (eventually) Henri Matisse widely available. Gauguin’s Haystacks in Brittany (Les Meules / Le Champ de pommes de terre), 1890, was exhibited in 1905 in the first major exhibition of Gauguin’s work in Germany, which was organized by the progressive museum director Harry Count Kessler in Weimar. In Berlin, the forward-looking director of the National Gallery, Hugo von Tschudi, started buying modern French art, while Paul Cassirer was among the first to exhibit Van Gogh’s works in Germany at his commercial gallery. Cassirer organized numerous exhibitions that also travelled to other German cities such as Dresden. It was there that the exhibition of Van Gogh’s work was shown at Galerie Arnold in 1905, generating great excitement among the artists of the Brücke, the first Expressionist group, founded only a few months before the exhibition opened. Van Gogh’s spontaneous and vivacious brushwork and departure from local color (where leaves are green and skies are blue) in favor of a deep emotional engagement expressed through color (where skies can become green, as in Van Gogh’s Wheatfield with Reaper) offered an entirely new avenue away from what members of the Brücke regarded as a restrictive reliance on perception alone, typical of both Impressionism and Neo-Impressionism. The Brücke artists decried this tendency to be “the accidental, merely frugally natural impression” to which they preferred a more emotionally felt “inner” experience. The work of these artists—Fritz Bleyl, Erich Heckel, Ernst Ludwig Kirchner, and Karl Schmidt-Rottluff, joined later by Cuno Amiet, Emil Nolde, Max Pechstein, and others—soon exploded in bright colors, the characteristics of which can be seen in representative works in Expressionism in Germany and France. At the same time that this activity was taking place in Berlin, back in Paris, André Derain, Maurice de Vlaminck, and Matisse (the latter two having been introduced to one another at a Van Gogh exhibition) joined Georges Braque, Raoul Dufy, Albert Marquet, and others to seek an alternative to Impressionism that would focus on bold colors and vivacious brushwork. They exhibited their findings at the 1905 Salon d’Automne, in which Jawlensky and Kandinsky were also shown. Confronted on this occasion by such works as Matisse’s Open Window, Collioure (La Fenêtre ouverte, Collioure), 1905 (National Gallery of Art, Washington, D.C.), critic Louis Vauxcelles coined the term Fauves (or “wild beasts”) subsequently used to describe the work of these French artists. The painter Max Pechstein saw the Fauves’ colorful paintings while living in Paris three years later, and their influence may have informed his casual approach in his Young Girl (Junges Mädchen), 1908 (cover of this magazine). 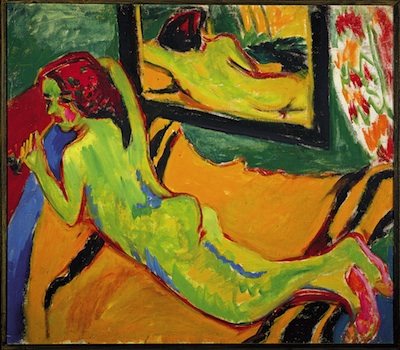 Soon the Fauves were being exhibited in Germany, including in an exhibition in Dresden, in which the Brücke artists also participated. Kirchner and Pechstein saw the 1909 Berlin exhibition of Matisse’s work (hung by the artist himself) at Paul Cassirer and informed Heckel via a postcard that it was “wild.” Indeed Kirchner must have been overpowered by Matisse’s experimentation with composition and space—it is hard to ignore the Frenchman’s influence on Kirchner’s Reclining Nude in Front of Mirror (Liegender Akt vor Spiegel), 1909–10. 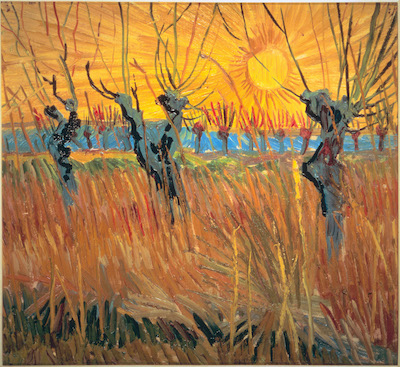 In Munich, Van Gogh’s Pollard Willows at Sunset (Saules au coucher du soleil), 1888 was shown at the Moderne Kunsthandlung gallery in 1908. The Blaue Reiter group, established in 1911, was well aware of current artistic trends in Paris. The group’s founding members—Kandinsky, Jawlensky, Münter, and Marianne Werefkin—frequently sojourned in Paris and presented their works at the Salon d’Automne and the Salon des Indépendants. The spectacular colors of Fauvism first found their way into their art beginning in 1908, when the group started to spend their summers in the alpine village of Murnau, where they responded to the subtle atmospheric light of the region. This palette is reflected in Jawlensky, Münter, and Werefkin’s flamboyant landscapes as well as in the already well-established abstraction of Kandinsky’s Sketch I for Painting with White Border (Entwurf zu Bild mit weißem Rand), 1913. Neither of these paintings is imaginable without the experience of Murnau, nor would they be possible without Fauvism. Yet, each original work was created by a mature artist who took a fully independent direction. 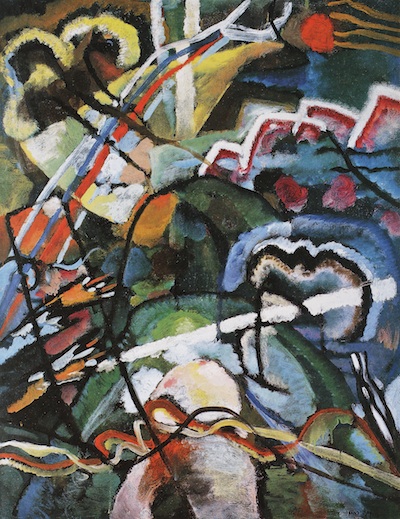 Franz Marc and August Macke soon came in contact with the chromatic abstraction of Robert Delaunay, whose colorful “simultaneous” paintings were exhibited in the first Blaue Reiter exhibition of 1911, which was organized by Kandinsky and Marc. This experience caused Franz Marc to repaint his Stony Path (Mountains/Landscape) (Steiniger Weg [Gebirge/ Landschaft]), 1911 (repainted 1912) with wonderful results. Kandinsky and Marc also explored in their paintings folk art and constructions of the “primitive”—inspired by the paintings of Rousseau, which they illustrated in their Blaue Reiter Almanach. (Rousseau's paintings will be examined in an entirely new light in the scholarly catalogue.) 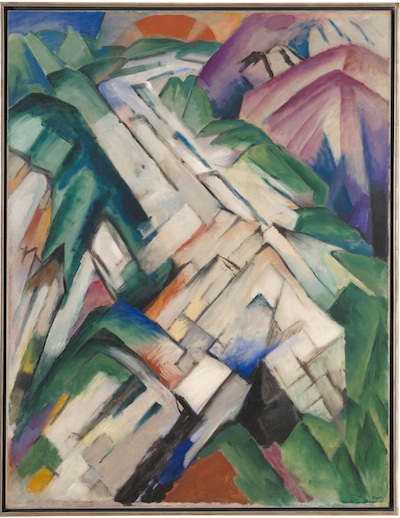 The development of Expressionism took place in the cosmopolitan milieu of artists, galleries, and museums in both France and Germany in the early 20th century. The founding of groups nearly synonymous with the term Expressionism—the Brücke and the Blaue Reiter—came at a heightened moment during which artists working in Germany were paying close attention to the styles developing in France. This exhibition seeks to bring together French and German masterpieces accompanied by their essential historical context—when and where they were exhibited, collected, and seen by artists—so that they may be enjoyed again by us while also capturing the moment when the artists that made them were inspired by one another. Timothy O. Benson, Curator, Robert Gore Rifkind Center for German Expressionist Studies Editorial note: A version of this article originally appeared in the spring 2014 (volume 8, issue 2) of LACMA’s Insider. Expressionism in Germany and France: From Van Gogh to Kandinsky opens to the public this Sunday, June 8, but LACMA members can enjoy early access (for free!) during Member Previews beginning today. Simply click through the link and make your reservation in advance.