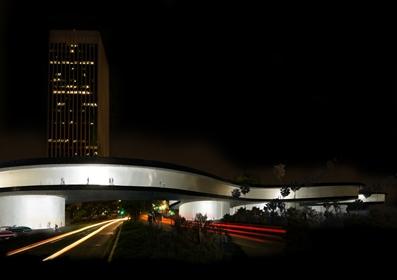 For the last year or so there has been a lot of talk about new, major works of architecture proposed for the Miracle Mile—more specifically the stretch of Wilshire Boulevard from Fairfax to Curson. First to come will be a renovation and new façade for the Petersen Automotive Museum, followed in 2017 by the new Academy Museum of Motion Pictures—a design by Renzo Piano making adaptive reuse of the 1939, A. C. Martin–designed former May Company department store. It will be adjacent to two more Piano buildings, LACMA’s Resnick Pavilion and BCAM.

Meanwhile work continues on the development of a new building on LACMA’s campus to be designed by Peter Zumthor. As was detailed in a recent New York Times article, with additional information in the Los Angeles Times yesterday, the Zumthor plan has (literally) taken a new shape since it was unveiled in an exhibition at LACMA last year. In order to preserve areas of future research by scientists at the neighboring Page Museum, Zumthor has smartly moved portions of the building away from the La Brea Tar Pits and instead bridging over Wilshire Boulevard to the land owned by the museum on the southeast corner of Spaulding and Wilshire. 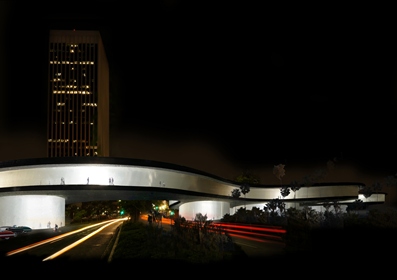 By moving roughly a quarter of the building (about 100,000 square feet) over and across the street, Zumthor’s design lightens the impact on Hancock Park. His design also opens up approximately two acres of new, open park space while improving pedestrian flow. The move also connects LACMA more directly to the vibrancy of Wilshire, with views up and down the boulevard as well as space for public and social activities on both sides of the street.

The building would be comprised of two levels—a large horizontal gallery level, and five pavilions at the park level that support the permanent collection galleries and house a variety of museum programs. Its square footage would be roughly the same as the four current buildings it would replace, but gallery space devoted to LACMA’s collection would increase by about 50,000 square feet (the equivalent of adding another Resnick Pavilion to the campus). That’s not insignificant, especially considering that LACMA has added more than 18,000 artworks to its collection in just the last seven years, including transformative collections of modern art, photography, ancient American art, and European fashion, as well as masterpieces by Thomas Eakins, Maruyama Ōkyo, Henri Matisse, and others. 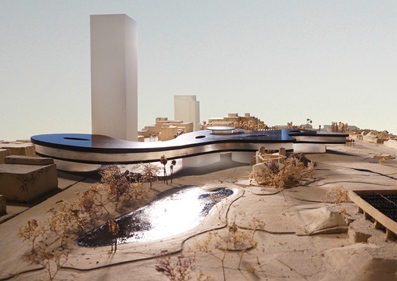 Zumthor’s design is still in the feasibility phase, meaning there is a long way to go. Elements of the building program are still being fleshed out, as are realistic timeframes, costs, and fundraising plans (all dollar amounts you’ve seen attached to the project, which seem to fluctuate wildly depending on what article you read, are at this point conjecture). That said, the hoped-for timeline would see the building completed by 2023.

Why 2023? Because that is the year the Metro arrives at Wilshire and Fairfax, connecting the Miracle Mile to other parts of Los Angeles as never before.

Which brings us to the latest news published by the Los Angeles Times today—the possibility of a commercial, mixed-use development across the street from LACMA, perhaps designed by Frank Gehry.

The site in question would be on land owned by four parties, LACMA being one. (As the article says, LACMA owns the lot at the corner of Ogden and Wilshire, which amounts to about one-third of the larger site.) Metro will use the entire site—on the south side of Wilshire from Ogden Drive to Orange Grove—for staging the construction of the new station. As with other new stations—for instance, the Hollywood and Highland station and complex which opened in 2000—development of the site will follow. The precise nature of the future development, in terms of its design and program, is very preliminary.

LACMA and our neighbors on the site all agree that the development should be of significant architectural and civic value that will contribute to the neighborhood and Los Angeles. Although no architect has been selected, Michael Govan expressed his hope for Frank Gehry in the article. The two worked together previously on Gehry’s iconic Guggenheim museum in Bilbao, and Gehry has worked with LACMA most recently on the exhibition design for Calder and Abstraction and the 2012 Ken Price Sculpture: A Retrospective. “That’s my dream,” Govan said in the article. “I’m jealous that New York has a Gehry tower and we don’t.”

All of these projects are long-term endeavors that will surely go through many ups and downs over the next nine years. Ultimately we hope that the Miracle Mile—already known for its history of fantastic architecture—will feature works by three Pritzker Prize–winning architects on one short stretch. It would be an incredible achievement for Los Angeles.