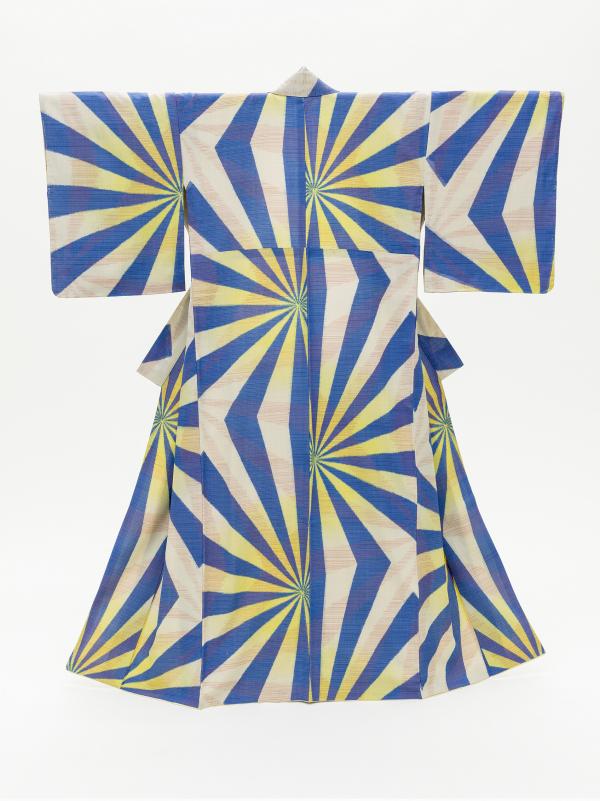 Kimono: A Garment of Change

In Japan, the kimono is a strong symbol of this extraordinary culture. Kimono, which simply translates to, “a thing to wear,” suggests to some extent how these objects served as important artifacts that tell the narrative of Japanese culture. The current exhibition Kimono for a Modern Age showcases some of the exceptional garments that tell the story of Japan of the early 20th century to the present. This ancient garment would passively see Commodore Perry’s 1854 gunboat diplomacy end 200 years of self-imposed isolation—a feudal sleep. William Gibson, a passionate fan, would write about kimono in an essay titled “My Own Private Tokyo,” in Wired publication: “the quintessential cargo cult moment for Japan: the arrival of alien tech.” And in less than 14 years, in 1868, the Meiji Restoration would restore Emperor Mikado from the shogun, thus ending the feudal period. By the end of the Meiji in 1912, the garment would see the embrace of the “Industrial Revolution’s full kit,” as Gibson would say, “steamships, railroads, telegraphy, factories, Western medicine, the division of labor—not to mention a mechanized military.” 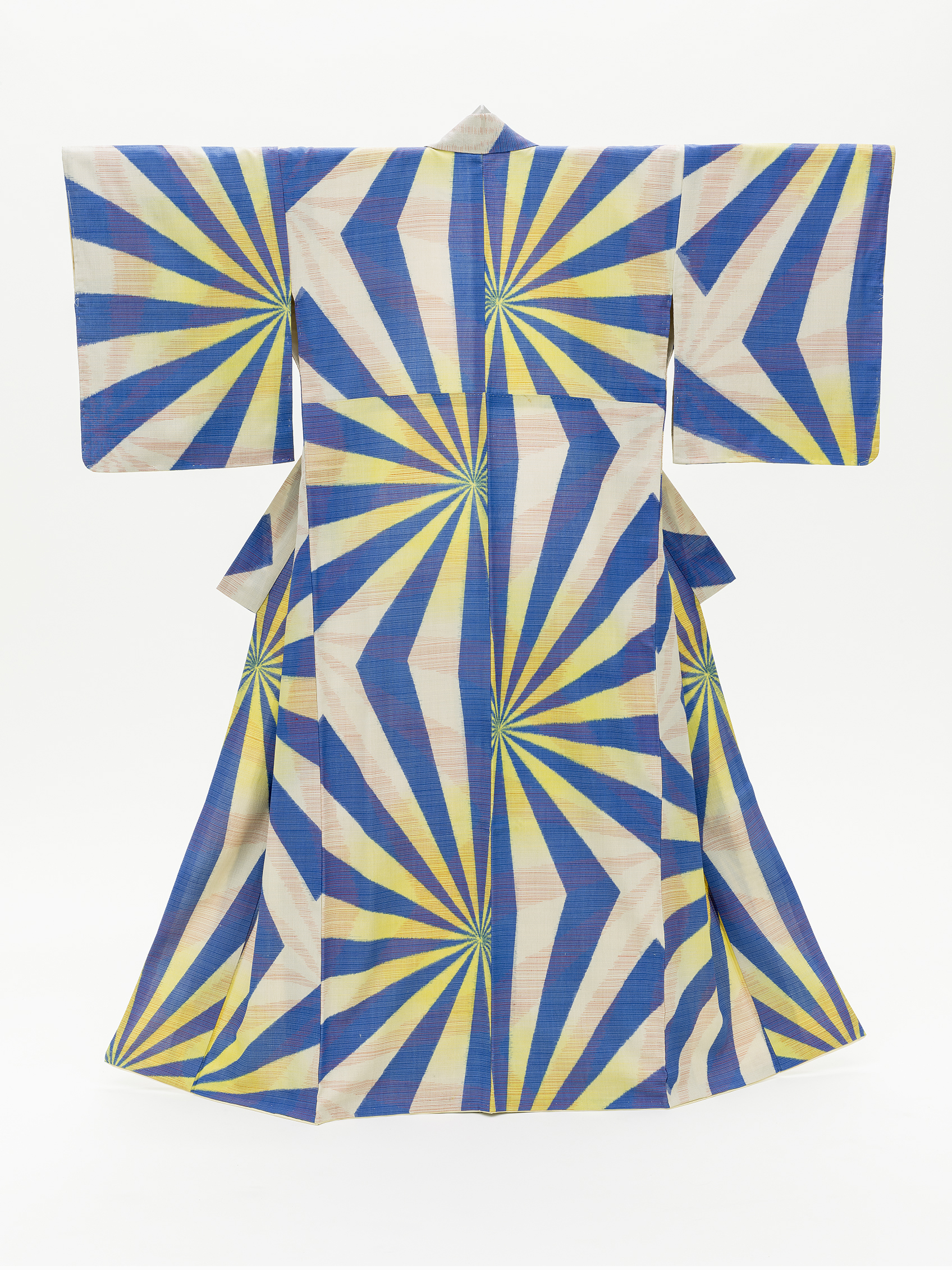 By the time our beautiful kimono appears on the scene between 1910 and 1920, Western culture had infiltrated everywhere. Japan had become thoroughly modernized, and the nation would have a forceful military presence in a different Asia. The cosmopolitan lifestyle of café, cinema, department stores, and art movements, such as Art Nouveau, Art Deco, and Cubism, inspired fresh designs. Even the Expressionist movement would waylay older traditions in the visual profile of the culture. 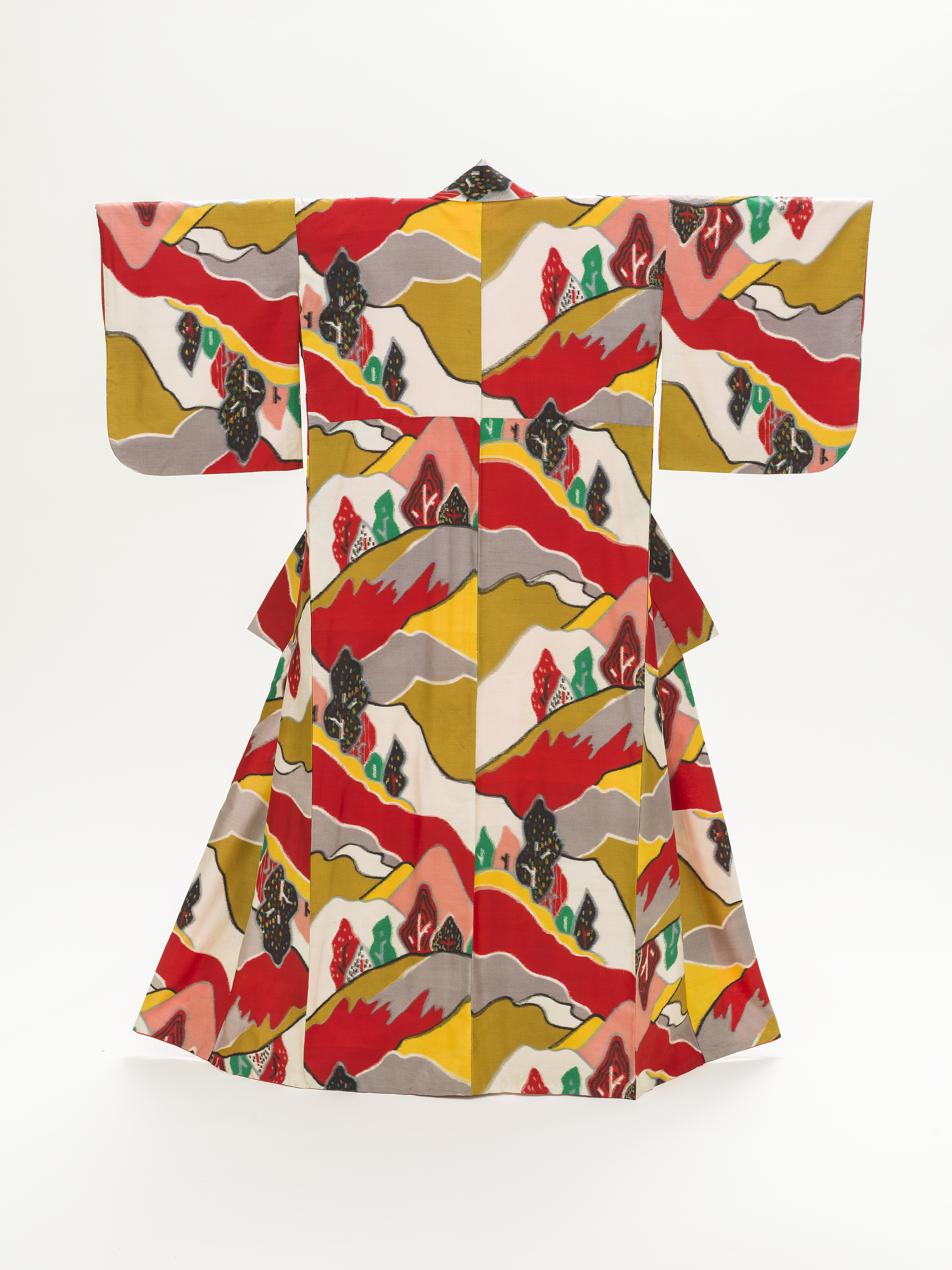 The industrialization spurred by World War I was background to Japanese life. In the new class systems, women were in the workplace, shops, and schools, and they moved in all aspects and were finding ways to express themselves and their independence. This transformation is told through the voice of our kimono, the boldness of Art Deco represents the independence of the woman who donned these patterns. Gone were handmade kimonos decorated with spring flowers and flowing streams, those delicate pastel iterations that represented the female posture and placement in the context of Zen Buddhism. The Jazz Age of the 1920s had captured the tempo, and it would be the new mood in this urbanized new world. 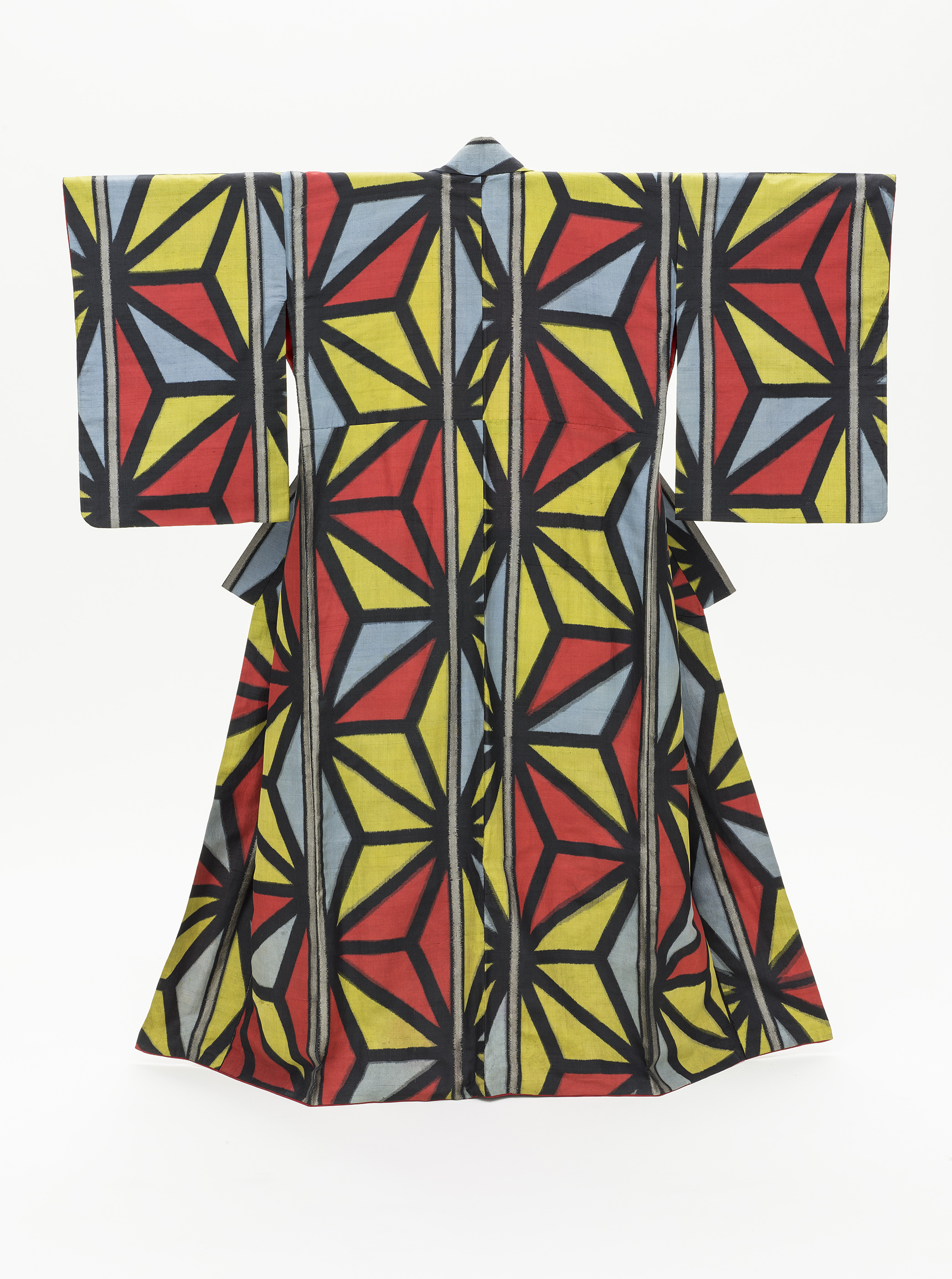 The bold kimonos were known as meisen. They were inexpensive and off-the-rack, ready-to-wear kimonos. Parallel to the Jazz Age Moga-modern girl was the West’s gypsy gamine, the flapper, flaunting her drop-waisted styles. And countering the society’s move toward industrial order, the Japanese homegrown Dada movement, known as Mavo (a Futurist group), would attempt to have its voice heard in the maelstrom of change—the boundaries between art and daily life. The zeitgeist was not unlike the “floating world” of the Edo period, where compelling urges were daring and new, and social norms were pushed. Western culture, particularly that of Europe, were drawing and seducing Japan into the modern world. The Earthquake of Kanto of 1923 killed 150,000 people and destroyed large parts of Tokyo, which was rebuilt along Western styles such as Art Deco. It was a vivid indication of how deep these influences were. 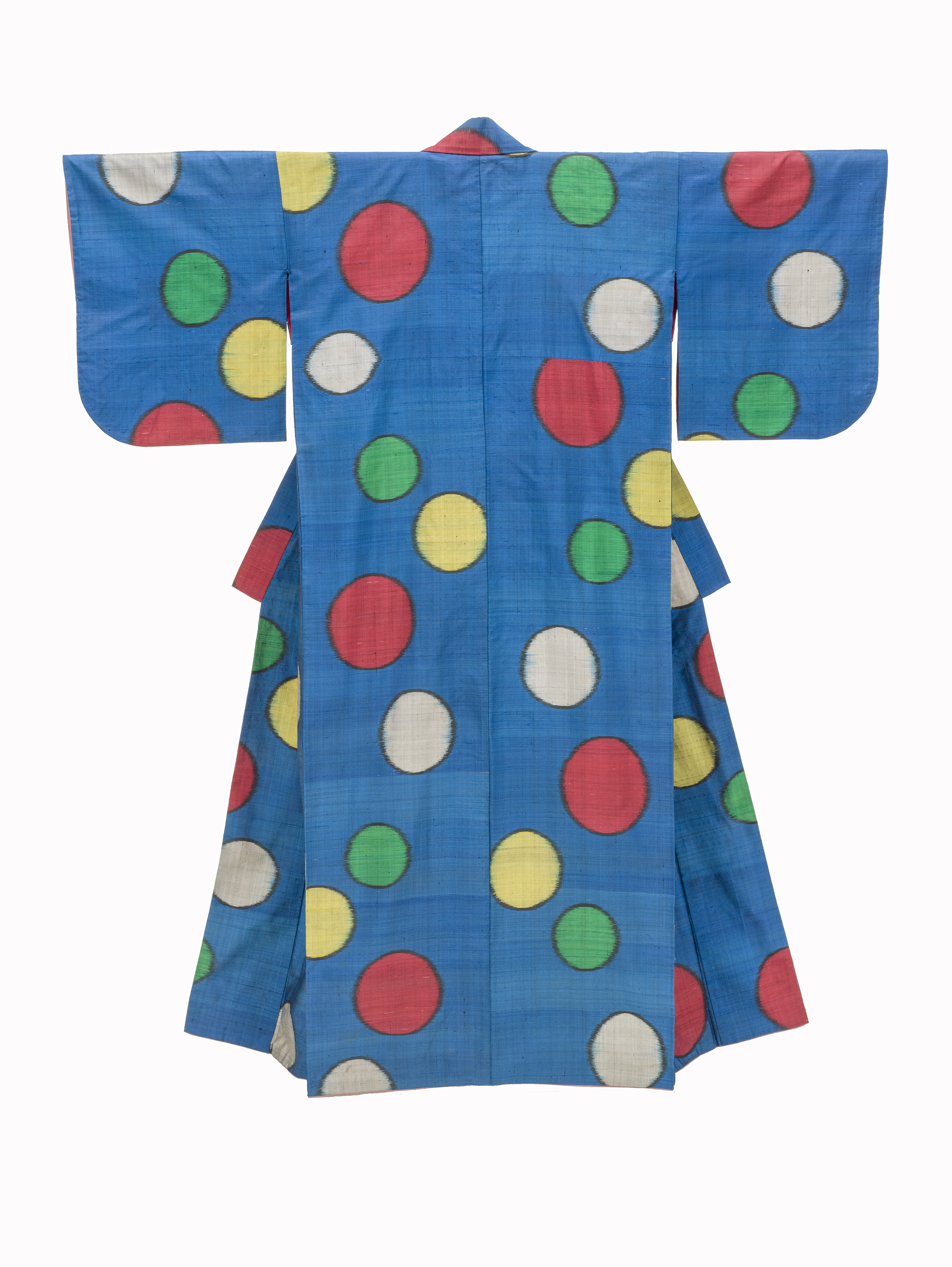 Upon seeing this bold example of clearly one of Art Deco’s graphic fascination with the Zebra stripes stylized in such a fluid matter, I was quite taken aback. The wavy black stripes on white ground were sometimes, sparingly though, shadowed by a gray stripe, which would end in small red-and-orange rectangles of various lengths. These hints at abstraction were a delightful surprise. And to learn from the didactic, it was a meisen—a ready-to-wear from the 1920s that was really thrilling. In my first collection for the House of Worth, I took the theme of the Japanese kimono and obi as a way of reimaging suits and dresses. Maybe it was all those Akira Kurosawa movies that endeared this dream. There was the Seven Samurai, Rashomon, and Ran, in which flowing cloth created its own spell, its own dashing drama. These were pure visual thrills. I must confess, I knew little of its history, but saw it as a natural armature to visualize a new look. To trace this history now is a lesson—it’s never too late to know more. Hylan Booker