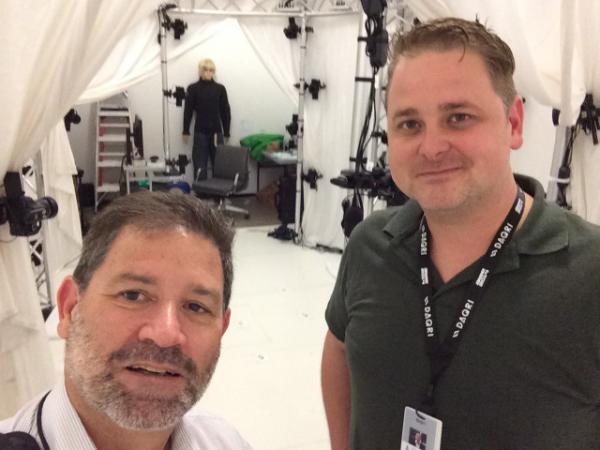 This spring, we presented John Craig Freeman’s project EEG AR: Things We Have Lost through our Art + Technology Lab. The project seeks to raise the question “What has Los Angeles lost?”, using augmented reality technologies to capture and share personal narratives and investigations into the history of the city.

As part of the project, during EEG AR clinics at the Lab, visitors donned Melon EEG headbands, faced a screen displaying their brainwave data, and were asked to think deeply about what they have lost. As their attention values increased, that activity triggered software that issued a call to manifest a virtual object, selected randomly from the database of lost things, on a special viewing device. The project was realized with the help of one of the Art + Technology Lab’s partners, DAQRI, and its Brain Computer Interface division, known as Melon. We sat down with Freeman and DAQRI CEO and founder Brian Mullins to learn more.

How did the collaboration work? Craig, how did you communicate your needs as an artist? Brian, how did your team translate these needs into tangible results?

FREEMAN: With the help of DAQRI and Melon, we created a seamless experience. The augmented objects appeared, either floating in space or firmly sitting on the ground, depending on what kind of virtual object it was.
https://www.youtube.com/watch?v=PISrZ8fhCsc

MULLINS: Teaming up with Craig was a very natural collaboration. When we met for the first time, I was struck by how he was already working with similar technologies; he had a very strong idea of the story he wanted to tell with AR and EEG data, and we were in the perfect position to help him refine and deliver it. Due to Craig’s experience and technical understanding, we were able to discuss the project fluidly—he would tell us how he saw it in his mind’s eye, and we would refine and optimize where we thought it would benefit him. Fortunately, we also have some very talented developers with an eye for design, who were able to help make everything look how Craig had envisioned.

FREEMAN: To communicate the concept of the project to the DAQRI technical team during the development phase of the project, I prepared a series of user stories, for example: I want the app to monitor the participant’s brain waves and display the brainwave data on the screens in the Lab. I want the app to produce a spawning effect, such as a cloud of particles, when the participant’s attention values increase.

Brian, how was it for you and your team to work with an artist? Do you see the roles between artist and technologist as separate?

MULLINS: The experience was awesome.  The relationship between technologist and artist is extremely fluid as both are constantly pushing the limits of what’s possible in both of their mediums, which is pretty exciting.  It opens up the possibilities for all kinds of interesting innovation.

FREEMAN: Although there is an inherent tension between the proprietary, often secret, profit motivation of successful technology companies and the public service mission of large institutions like LACMA, the Art + Technology Lab seems committed to exploring and possibly overcoming this tension. In my mind, the success or failure of an art and technology collaboration depends on how fluid the roles between artists and technologist are, and on how willing each party is to freely share intellectual property. We seemed to have struck a productive balance with this project, one that could serve as a model for future collaboration.

It seems like EEG technology is becoming increasingly available to artists. Are there any historic artistic or technological precedents that you came across while working on this project?

FREEMAN: In earlier versions of this project, I worked a bit with Scott Kildall, a San Francisco based new media artist and creative coder, who has done a number of very interesting EEG projects including After Thought, a portable personality testing kit, which uses flashcards and brainwave analysis to test stress and relaxation levels.

MULLINS: EEG’s time has come. You could argue there’s more development in the last five years than in the last seventy years.  It’s opening it up to all kinds of applications. Making EEG technology accessible to artists is a good indication of the rapid innovation in this area, with advances that are allowing things to improve, costs to go down, and accessibility to grow.  The most valuable thing is that, as a society, we’re getting more information about EEG. We can make more meaningful correlations that, in turn, increase the value of EEG and make the quality of the equipment even better.

Craig, you’ve previously expressed your interest in exploring the possibilities of random chance to express the subconscious with this project. Brian, you have spent a lot of time researching brainwave detection and the idea of measuring a “signature” brainwave. Do you both think its possible for a subject to reach the same conclusion using these different methods?

MULLINS: Is it reliable that we’ll actually understand what people are thinking?  That’s a great question, but it’s a longer-term question.  As the technology improves, we’ll learn things about the brain that let us unlock its full potential to learn even more about the state of people’s brains, as well as their intentions.

FREEMAN: As I understand the science, it would be impossible for EEG to detect a common brainwave pattern for a specific object, which could be replicated by different test subjects. However, as an artist, I am very much interested in exploring the possibilities of random chance in this project –the idea that a subject might be thinking of a rather trivial loss like “keys,” and something profound such as the object for “lost youth” appears. Similarly, if someone thinks about “lost pension,” and got “lost pension,” the experience might be quite startling. The exploration of chance operation in avant-guard art has a rich history, including works such as Marcel Duchamp’s 3 Standard Stoppages and John Cage’s Music of Changes. There is even a corollary between EEG AR: Things We Have Lost and the I Ching, the ancient Chinese Book of Changes, which requires a chance operation to be read. Cage used the I Ching to create the Music of Changes composition. In this sense, the virtual lost objects represent the equivalent of the I Ching hexagrams and accordingly, the EEG AR experience could be regarded as a kind of memory divination.

MULLINS: Whether or not we ever get deep enough to start to understand thought, I think it’s still very early to make that estimate.