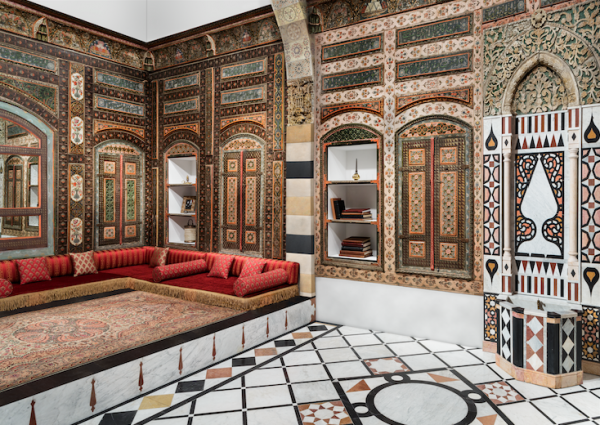 Linda Komaroff, Curator of Islamic Art, and Department Head, Art of the Middle of the East

This is the third communiqué in as many years about the Damascus room at LACMA. Previous posts focused on the room’s historical context and its reconstruction and conservation. But before plans for the conservation work and the elaborate metal armature to support the room could be finalized, a curatorial plan was also needed, which would address how the room was to be displayed, accessed, and comprehended by visitors. Our goal was not to produce an absolute historical re-creation of an eighteenth century Damascus room, especially as we had no existing photographs or drawings of the room in its original setting, prior to its being dismantled and exported from Syria in 1978. Rather, we decided to create a period room that would capture the essence of such late Ottoman domestic interiors without entirely divorcing the room from either its more recent history or its new twenty-first century museum context. The room was relatively complete, lacking only its wood ceiling and certain architectural elements inherent to the structure of the house from which it was removed (such as the clerestory), and this, along with its comparatively fine condition, helped with the task. In its present state, it consists of a colorful stone floor; polychrome wood walls; elaborately decorated cupboard doors; window shutters and storage niches; a spectacular arch of cast-plaster voussoirs decorated with colored-paste inlays, which, along with a tall stair riser, serves to divide the room into upper and lower sections; and an intricately inlaid stone wall fountain with a carved and painted stone hood.

The decision was made early on to permit visitors direct access to the antechamber, or ‘ataba, which allowed us to use as our entrance the original doorway opening combined with the adjacent area that had been left undecorated for the door’s backswing. Because the room was not going to have a permanent location for its first years of exhibition (it will be shown at the King Abdulaziz Center for World Culture, Dhahran, Saudi Arabia from 2016–2018), we determined to keep the window shutters closed, to cover the two large niches in the upper section, or tazar, with re-creations of late Ottoman-appropriate mirrored doors, and to install only the lower elements of its tall arch. Objects of the type that might have been displayed on the shelves were selected from the museum’s Islamic art collection for inclusion. Made in Turkey, Iran, and North Africa as well as the Levant, these objects would reflect the cosmopolitan tastes and extensive resources of the elite owners of the room. For the reconstruction of the seating section of the tazar, we were also guided by vintage photographs of other such rooms in situ, as well as by contemporaneous accounts, for instance, that of the British physician Alexander Russell, who lived in Syria for several years. Russell supplied this description of a reception room in his account of the city of Aleppo, first published in 1756:

The divan is formed in the following manner. Across the upper end and along the sides of the room, is fixed a wooden platform four feet broad, and six inches high. Upon this are laid cotton mattresses exactly of the same breadth and over these a cover of broad cloth, trimmed with gold lace and fringes, hanging over the ground. A number of large oblong cushions, stuffed hard with cotton, and faced with flowered velvet, are then arranged on the platform close to the wall. The terraced floor in the middle, being first matted, is covered with the finest carpets of Persia and Turkey.

For the LACMA room, the lower cushions were made slightly smaller than those in Russell’s narrative so as not to overwhelm the space; the Ottomanizing velvet and silk and gold–style fabrics used for the cushions were purchased in Istanbul, as was the classic Turkish carpet. 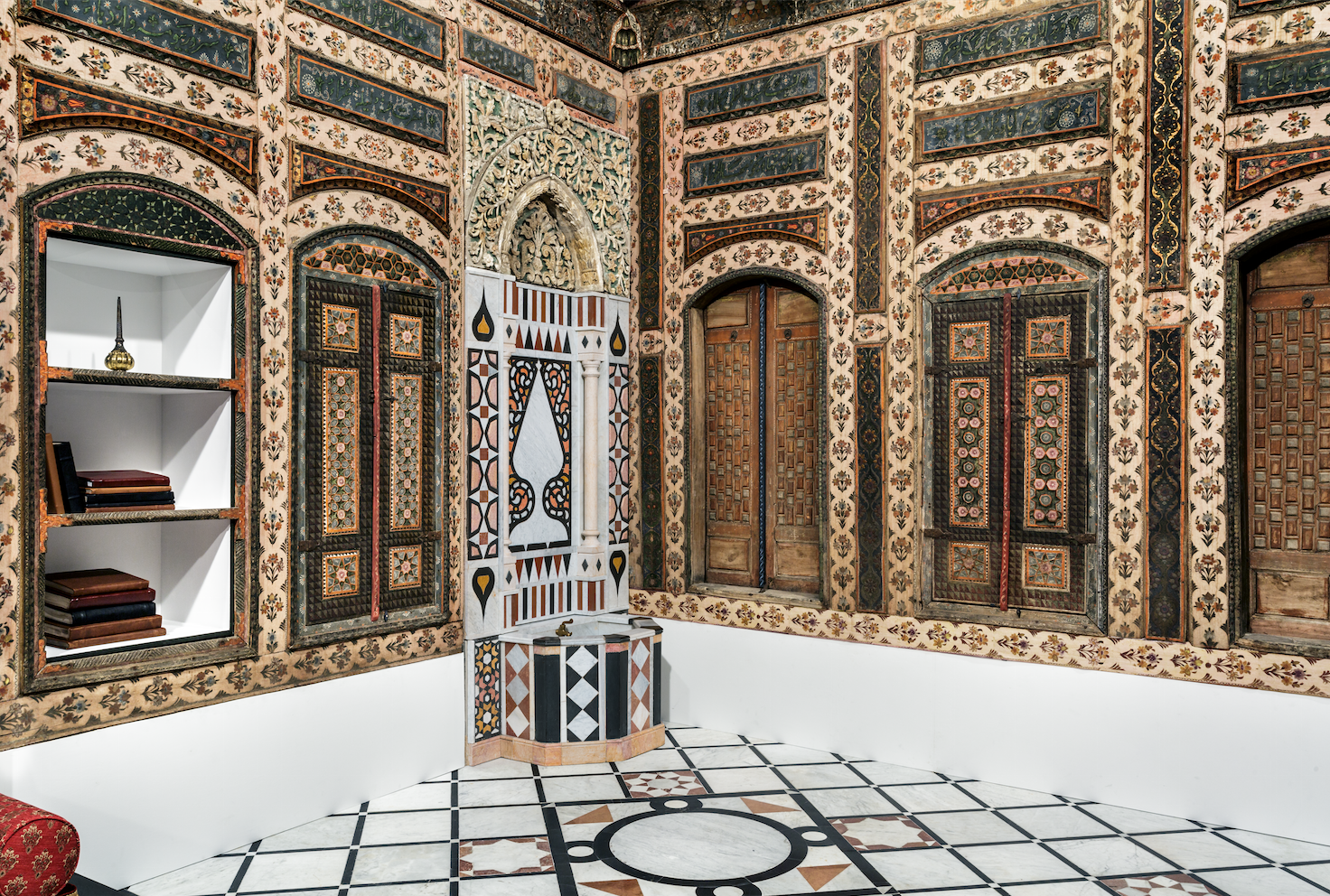 Finally, although we were able to determine that some sections of the fountain, such as the pair of inset columns and the red and black triangular and rectangular elements above and below its central decoration, are modern additions, the main constituent parts—including the striking inlaid stone abstract design at the center, the stone basin, and the carved and painted stone hood—are appropriate to and consonant with the late Ottoman period. The fact that the stone hood fits perfectly among the wood panels does not exclude the possibility that it, along with certain of the other stone elements, once may have formed part of a masabb, a tall wall niche often located opposite the entrance of the reception room.

The lengthy process of acquiring the room for LACMA commenced in late 2011 just as the situation in Syria began to deteriorate, and in the intervening years things have gone from bad to worse. The reconstruction and restoration of the room is finished for now; the images here project the way it will one day look at LACMA, with its arch fully installed and its clerestory recreated. Witnessing the transformation of the room from the dismantled and dirty condition in which I first saw it in a London warehouse to its present state, has been one of the most exciting and gratifying moments of my curatorial career. Being in the room is a joy; it exudes a kind of beauty, warmth and comfort, which is in keeping with its original function as a place for welcoming guests. But that joy is tempered by the sadness of the continuing deterioration of daily life in Syria, the diaspora of its citizens, and the destruction of its historic monuments. For now, the room must play one more role as a preserver of memories of Syria, as so beautifully expressed by the Syrian-American hip-hop artist and poet Omar Offendum, whose performance we recorded in the room. 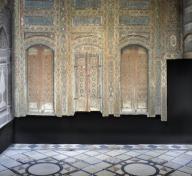 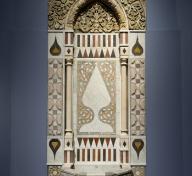 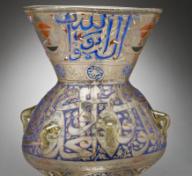