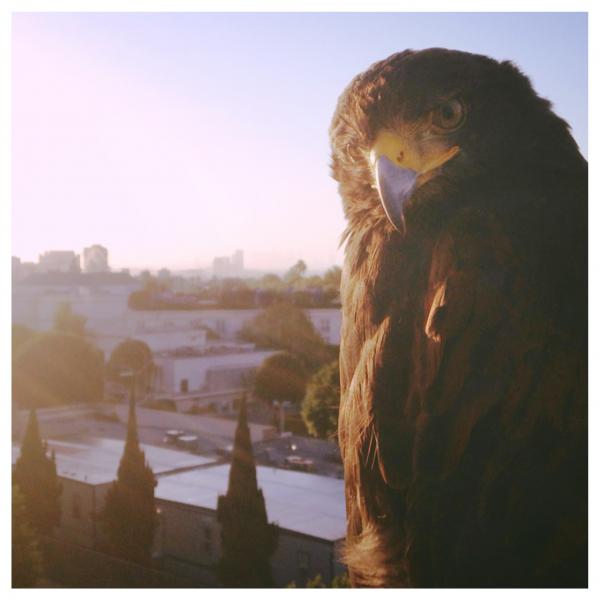 The Art of Falconry

If you've been on campus recently, you might have spotted a hawk soaring above LACMA’s buildings. That’s because falconry experts are helping us to naturally and humanely remove the pigeons, which have the potential to transmit disease and have become a nuisance for our visitors, that have claimed the museum as their home. Alyssa and Mike Bordonaro of Hawk Pros and their raptors will continue to patrol the property, creating an uncomfortable environment for the pigeons. Mike took some time out of his busy day to chat with Unframed about falconry. 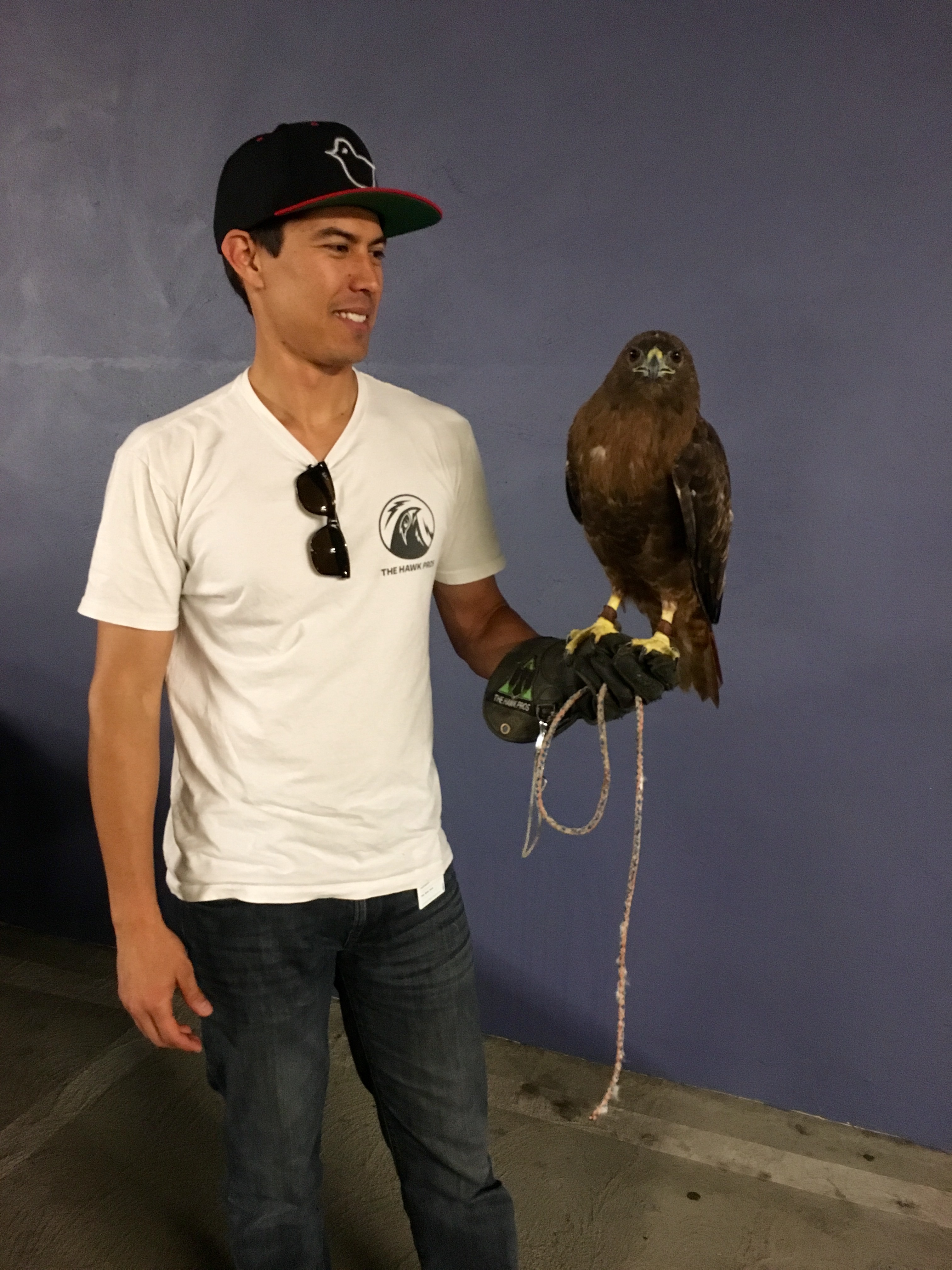 Mike Bordonaro with his hawk at LACMA

Can you talk about your path to falconry?

Like most men, you follow the woman. My wife was actually a falconer when I met her. She has been doing it since she was little. She went to falconry meets—you meet a bunch of falconers, people who practice the art. They take you out into the field and hopefully someone will take you on as an apprentice. You are required to have an apprenticeship of two years, where you learn about the birds, how to train them, how to properly take care of their health, what’s expected of you, and what’s expected of them. Then you get a federal falconry license.

How many birds do you work with?

You have been coming to LACMA for a couple of weeks. Do you customize your strategy for each client, based on the layout?

It’s going to be different every place we go. Pigeons want food, a water source, and shelter. [LACMA] provides everything. So if they have all of it, and they’re living on site, it’s the hardest to get rid of them. They’re breeding here year-round—they have no breeding season. Once they breed, this is their home. We have to remove the ones that were born here and we re-home them. And the ones that come by to check it out, that’s when we fly the hawk.

The hawk establishes its territory so the pigeons don’t feel safe. If they don’t feel safe, they’re not going to nest, and hopefully they’ll move on. We’re creating an environment like nature would, a threatening environment, so they would want to move on. Our birds are highly trained. They’re not supposed to catch any birds, but if they were to catch something, they’re trained to trade it off for a reward. And our hawks are safe around other animals and people, including small children.

Where do the hawks fly when they are patrolling?

Wherever I take them. Where the pigeons are. I’ll be flying them near Ray’s and on the L.A. Times Central Court, where the pigeons normally nest. That’s where they eat. If you can drive them out of that spot, they’re going to be forced to find somewhere else to eat. They’ll end up moving for good.

You brought a hawk with you today; what did you do with her?

I’m acclimating her to LACMA’s grounds. We work across the street, so she’s somewhat familiar with this area. I took her up to the roof of Ray’s and did some training techniques with her. I wanted to get her comfortable flying in this area. She does venture off. She’ll fly from one building to another. If she gets too far she knows to come back to me.

Do you ever lose sight of them?

We do if they go up high enough, especially if we’re in the city.

How long do they take to return to you?

You never know. It’s different every time. It could be minutes or an hour or it could even be overnight.

What do you do when that happens?

We put transmitters on them—a locator. It’s not GPS, it’s telemetry. You have to point the receiver and the beeps will get louder and louder. Once, one of my male Harris’s, when we were flying [across the street], decided to go have some fun. I didn’t know where he was and I couldn’t get a signal. When that happens, you’re just kind of waiting for them to come back. If it gets dark, they don’t fly; they’re not going to move. So you go back to the same spot the next day and hopefully you’ll find them. So I came back early the next morning, and he was sitting on the building where I left him, hanging out.

Do you use verbal cues to call them?

I just whistle and put some food on my glove. If I hold my glove up or reach in my bag, they know I’m pulling food out and they’ll be here.

A big part of what you do is educating people. What do you want people to take away?

That conservation is very important. We want to make people aware of the dangers of things like rat poison. A wild raptor comes and eats a rat, and it’s going to die from it. It’s a shame, because people don’t think about what’s going to happen to the wildlife that comes into contact with pests.

A lot of places will have spikes and the wooden owls. But pigeons will build a nest right above the owl and inside the spikes. The spikes actually help them, because they create a structure. Nets don’t work for long, either. Once a corner gets loose, birds will go in there, into a protected environment. The only thing that works is nature.

In the Middle East, falconry is huge. It’s not so popular over here. Nobody’s really aware of it. But it’s been around a long time. They used it in medieval times and before that, too. It’s an art, really. 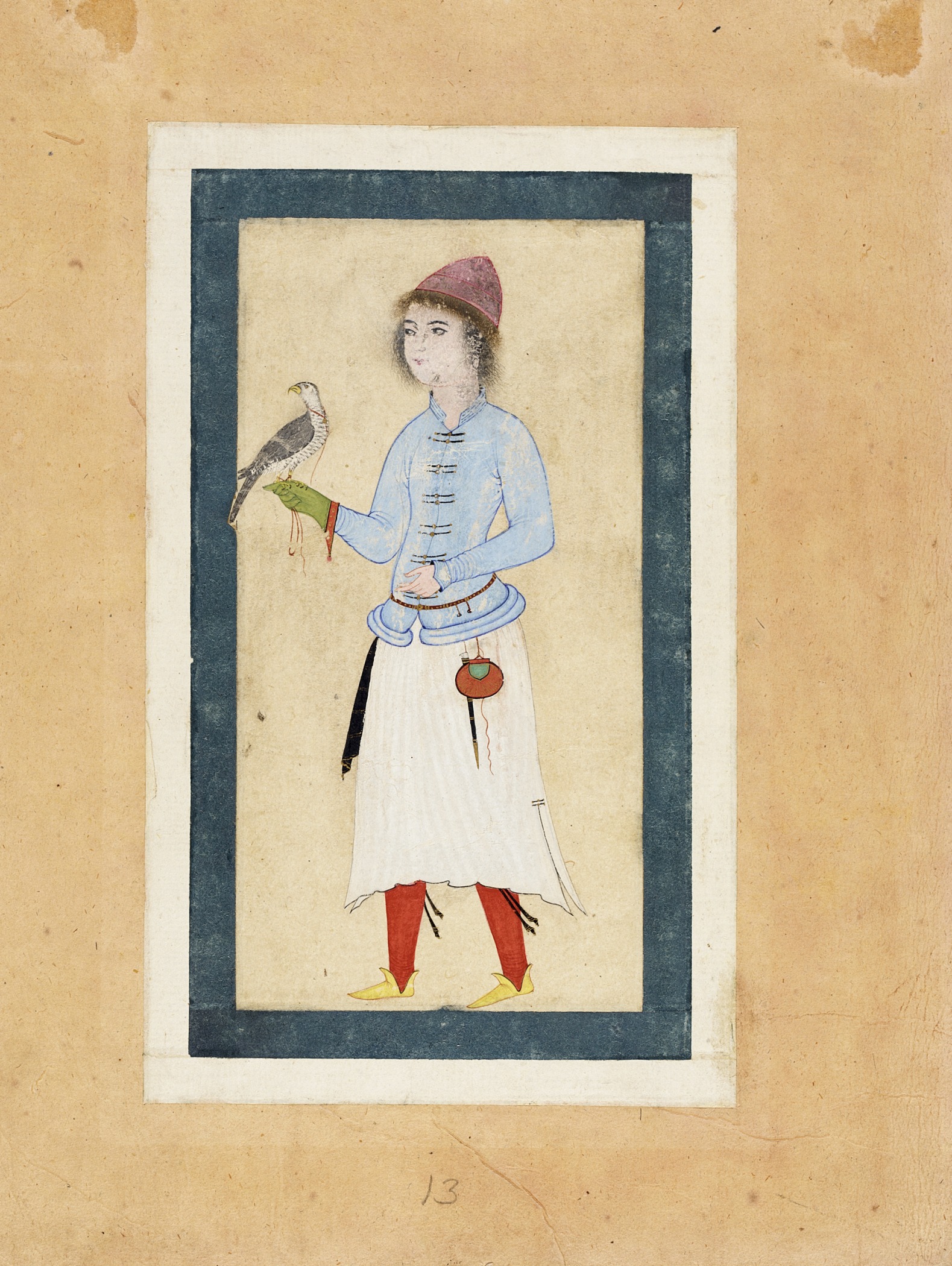