From the Collection: Dance Paddle (rapa)

Art of the Pacific

Located in the eastern-most area of Polynesia, Easter Island (Rapa Nui) lacks the natural resources of many of its Polynesian cultural counterparts. This makes the exquisite quality of the work produced there, such as this rapa, or dance paddle, interesting, because there was very little indigenous wood on which to hone carving skills. Works were made from either this minimal amount of natural wood or found pieces, such as driftwood.

The form of this two-sided paddle is unique in Polynesia as all others have only one blade. Paddles of this type were often used in pairs during seated ritual dances. Such paddles have a thin handle connecting the blades to facilitate the spinning and twisting motion of the dance. One end has an abstract human face made up of a long, thin, nasal ridge that curves up and out into a curved brow ridge that continues on to decorated ears at the outer edges. The opposite end has a blunt spike similar to utilitarian paddles, which use the spike as a pushing tool. Many scholars believe that this end of the paddle represents the abdomen of the figure, with the thin handle representing the neck, and the spke, a phallus. This paddle and many of the other surviving examples were made prior to 18th century contact with seafaring travelers, without the aid of modern metal-tool-carving techniques.

The abstract designs on the paddles are believed to be associated with the birdman cult that was centered around the sooty tern colony at the island's northern area. This differed from the other potential ritual usages, which were performed on the ahu ritual platforms with the large stone moai heads, prolific symbols of the island.

The dance paddle is on view in the Art of the Pacific galleries in the Ahmanson Building. 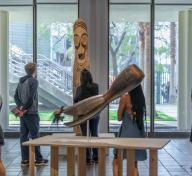 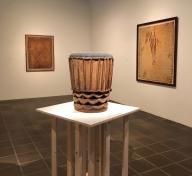 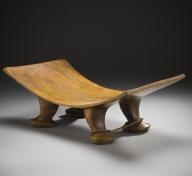