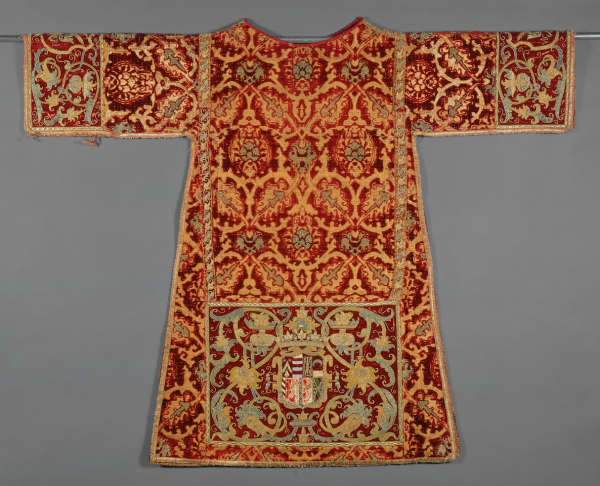 The Former Life of a Spanish Dalmatic

A red Spanish dalmatic from the mid-16th century is now on view in LACMA’s European galleries. Dalmatics, long tunics with sleeves that open at the sides, were traditionally worn by Catholic deacons at High Mass. Made of deep red silk velvet with gold-plated silver threads, this clerical vestment is especially lavish and would have surely lent an element of splendor to the liturgy. 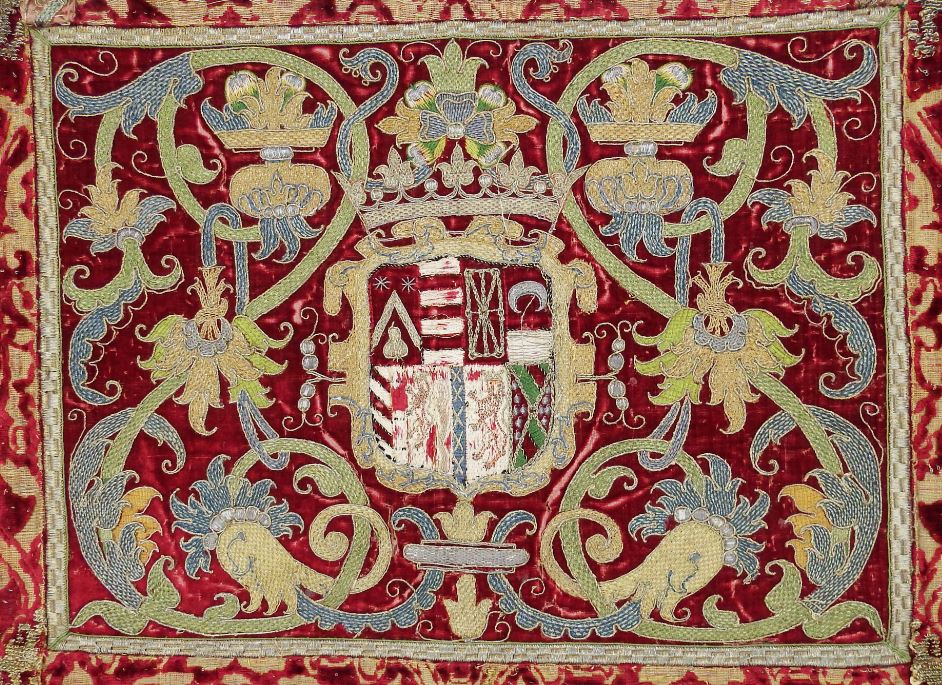 Months before its installation, I was invited by my colleague in the Department of Costume and Textiles to examine the dalmatic. The vestment is in excellent condition, but with areas of worn velvet and loosening threads. These traces of the vestment’s former life and use within the liturgy sparked my curiosity about its original context—a Catholic church in 16th-century Spain. 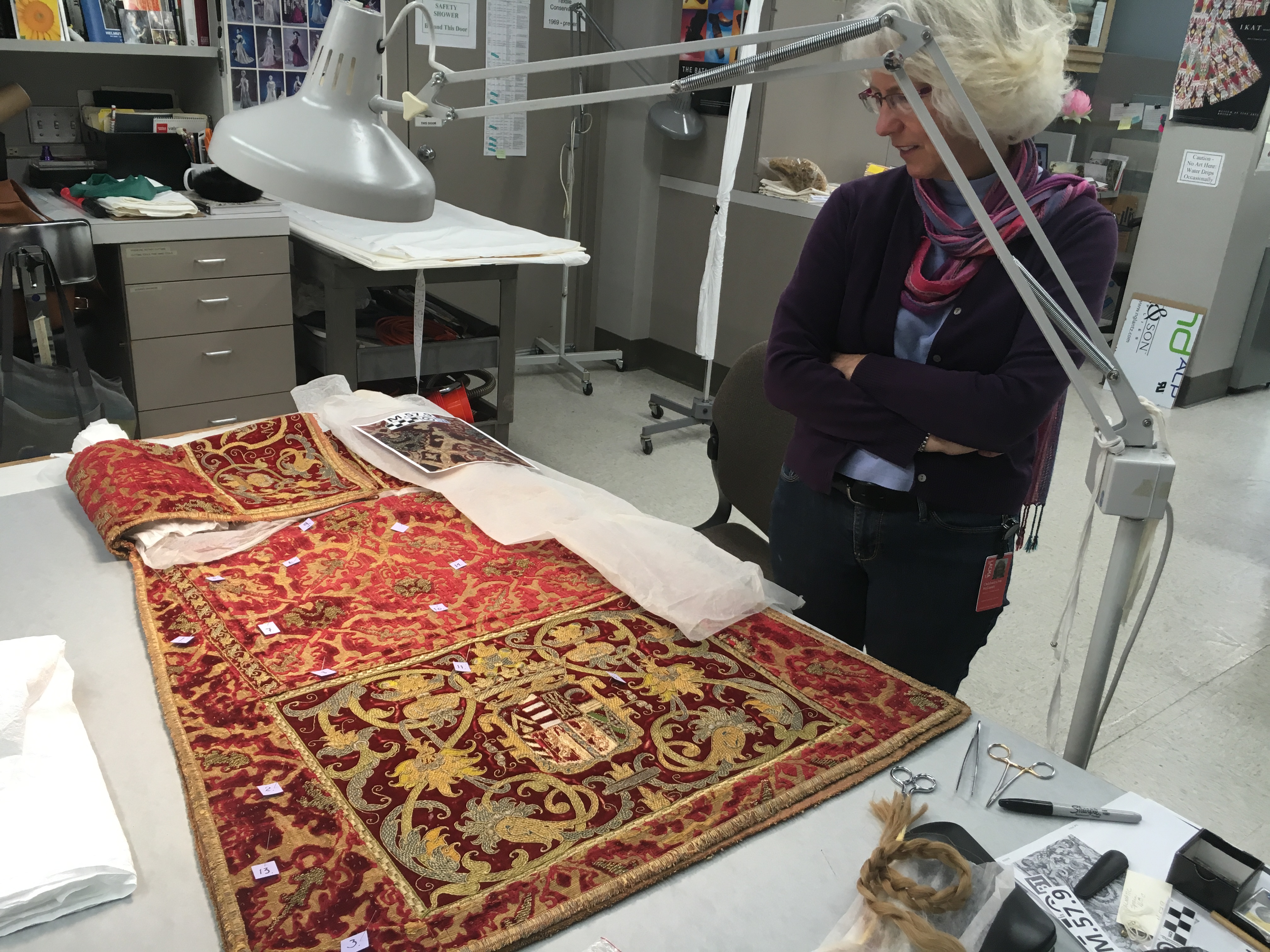 In early modern Spain, the wealthiest among the faithful supported the Catholic Church through monetary and material donations. The elite commissioned artworks to adorn places of worship, and they gifted luxury items, such as clerical vestments, censers, and cult objects, for use within the mass. The ability to acquire these objects and bequeath them to religious institutions was indicative not only of their prosperity and power, but also of their piety. The coat of arms emblazoned on the front and back of LACMA’s dalmatic likely represents an important patron of the church where this vestment was originally worn. 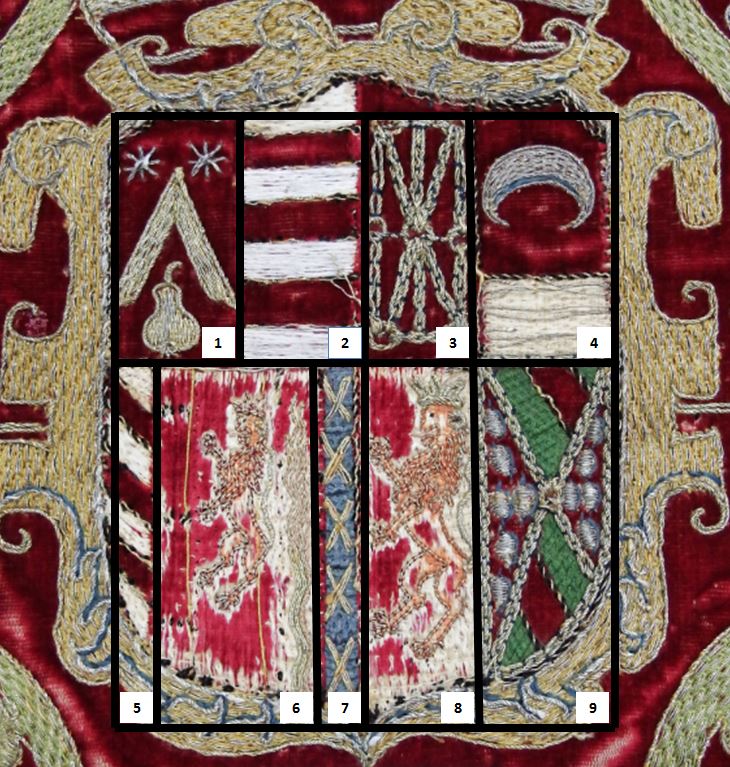 The coat of arms is surrounded by flowering pomegranates, symbols for Christ’s Resurrection and eternal life, and carries a secular crown. This particular coronet signifies that the patron was a marquis, a title of nobility. The heraldry is particularly complex, but several of its nine fields (pictured in the detail above) are easily identifiable: arms for the Kingdoms of Navarre (3) and León (6 and 8), and imagery associated with the Luna family (4) and the House of Mendoza (9). The inclusion of the heraldry for the Mendoza and Luna families led me to speculate that the patron was possibly a descendant of Diego Hurtado de Mendoza (1417–1479), the first duke of Infantado. 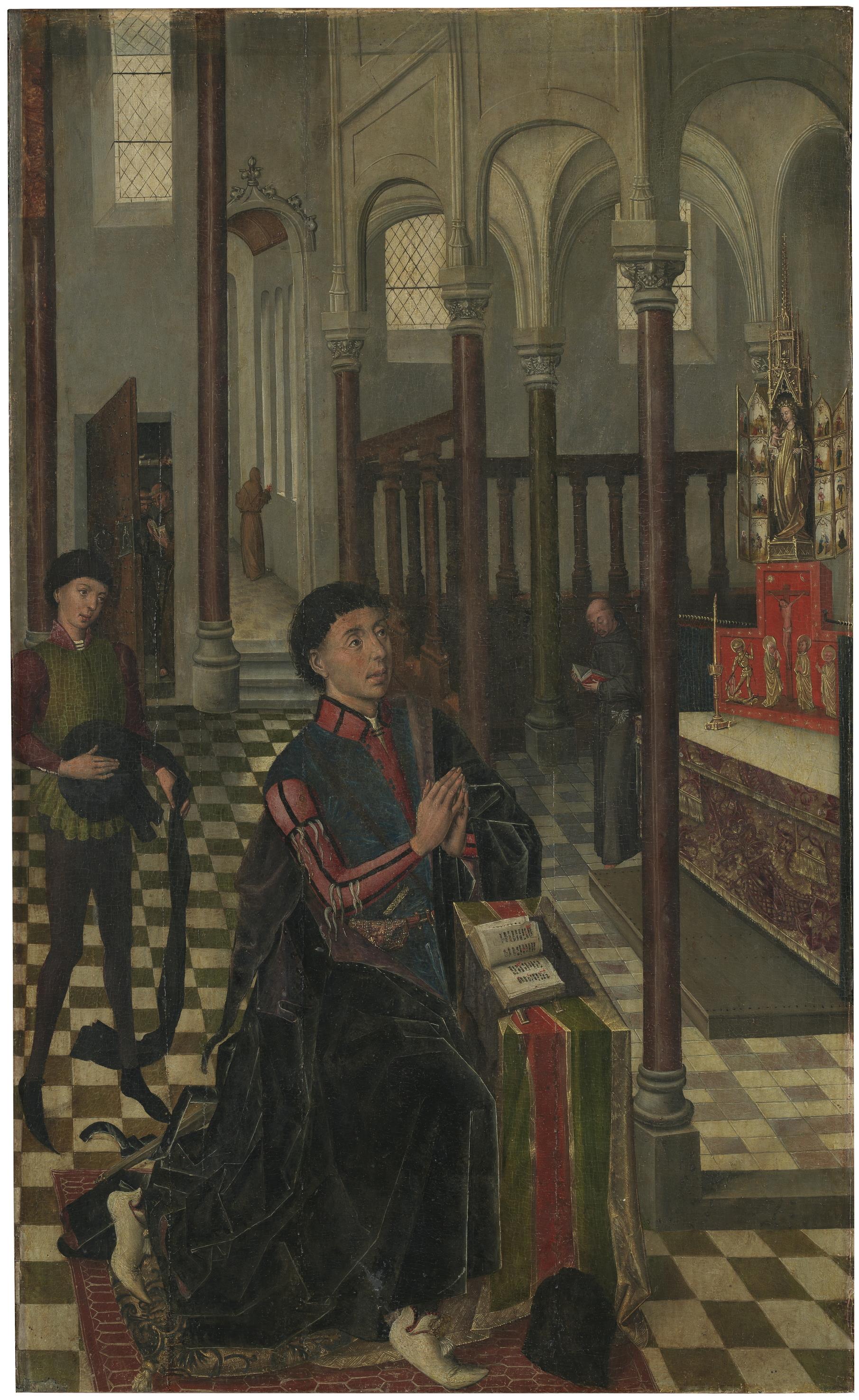 In his lifetime, Diego Hurtado de Mendoza was the head of the Mendoza clan, one of the wealthiest and most powerful families in early modern Spain. While the House of Mendoza originated in the province of Álava, a territory in northern Spain bordered by the communities of Castile and León to the west and Navarre to the east, their influence was far reaching. During the Castilian Civil War (1366–69), Enrique II of Castile (1334–79), the first King of Castile and León, granted the family several estates and political offices throughout Spain in return for their military and political service. In 1475, the Catholic Monarchs, King Ferdinand of Aragon (1452–1516) and Queen Isabella I of Castile (1451–1504), conferred the title duke of Infantado to Diego Hurtado de Mendoza. The title remained within the family until the late 18th century through line of succession. Significantly, Hurtado de Mendoza aligned himself with the Luna family through marriage, marrying Brianda de Luna in 1446. Their son, Íñigo López de Mendoza y Luna (1438–1500), the second duke of Infantado, also married a Luna—María de Luna y Pimentel. 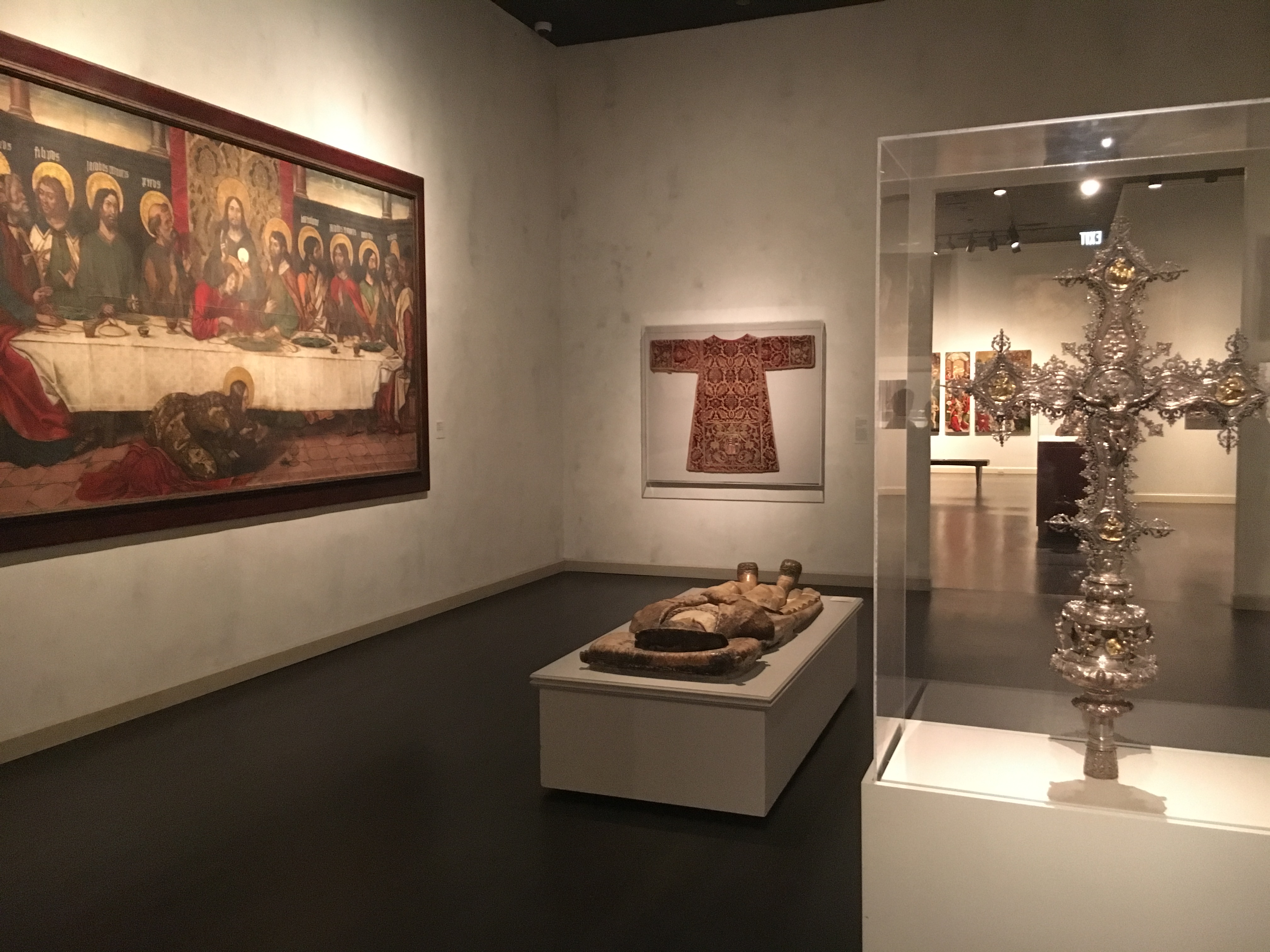 It seemed plausible therefore that the dalmatic was associated with this particular branch of the Mendoza family and the dukes of Infantado, but I was hoping to further substantiate my hypothesis. I looked into LACMA’s archives to learn more about where it was acquired. To my surprise, the vestment’s more recent history supported my hunch. The dalmatic was purchased in 1957 from a dealer of textiles and decorative arts based in Los Angeles. In 1930 the dealer visited the Infantado Castle in Gipuzkoa, a province in northern Spain. The magnificent estate was built in the 17th century and is one of the iconic properties of the House of Mendoza. There, the dealer acquired a number of luxury items to sell in his gallery. Whether or not this is a coincidence, it proved to be a compelling connection, which might point to the place of origin of this remarkable Spanish vestment.

While the identity of the patron still remains somewhat of a mystery, the coat of arms and the dalmatic’s 20th-century provenance provided some tantalizing clues regarding its possible association with one of early modern Spain’s most prominent and influential families. The vestment can now be admired in the European galleries in the Ahmanson Building, Level 3.