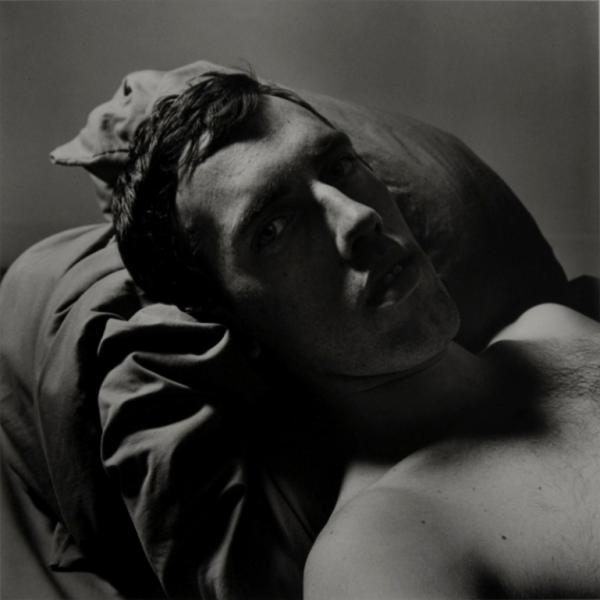 A 1981 portrait by Peter Hujar in LACMA’s collection shows its subject, artist David Wojnarowicz, reclining against a pillow, his head turned to face the camera. Like many of Hujar’s portraits, the image holds the stripped-down intimacy of its setting and directness of the subject’s gaze in powerful tension. Hujar, who died of AIDS in 1987, was a quiet chronicler of the downtown New York scene of the 1970s and 1980s; his photographs, seen today, carry the poignancy of what several writers have recently referred to as the “lost New York” of that era.

Those decades were, of course, marked by the ravaging effect of the AIDS epidemic on an entire generation of artists. Wojnarowicz, who was Hujar’s lover, was one of many artists who turned to activism in response to the staggering lack of government acknowledgement of or response to the growing crisis. In 1987, ACT UP (AIDS Coalition to Unleash Power) was founded as a vehicle to organize political action; Gran Fury, an artist collective, was formed a year later and was responsible for many of the galvanizing images of the movement, such as the iconic SILENCE=DEATH symbol.

In 1989, the organization Visual AIDS called on arts communities around the country to observe the first Day Without Art on December 1, coinciding with the World Health Organization’s AIDS Awareness Day (now known as World AIDS Day). More than 600 museums, galleries, and other arts institutions participated in the day of mourning and action to raise awareness about HIV/AIDS and its devastating impact on the art world.

Many museums and galleries covered or removed significant artworks, some replacing them with placards about HIV/AIDS and safer sex. Others organized exhibitions, programs, performances, and memorials celebrating the lives and accomplishments of colleagues and friends who died of AIDS. Visual AIDS also worked with artists (including Frank Moore, Leslie Sharpe, Jorge Calderon, Darrell Ellis, and others) to create a series of posters for the annual event that were distributed nationally and displayed by museums, arts institutions, galleries, LGBT groups, and AIDS service organizations.

For its 10th anniversary in 1998, the annual event became Day With(out) Art, with the parentheses added to highlight the ongoing inclusion of art projects focused on the AIDS pandemic, and to encourage programming of artists living with HIV. Visual AIDS continues to organize the Day With(out) Art annually—a reminder to many who no longer think of AIDS as a crisis that over 36 million people around the world are living with HIV/AIDS, and there is still no cure.

In this socially and politically tumultuous time, both nationally and globally, the Day With(out) Art is an enduring and timely reminder of the power of art to challenge accepted ideas, call out injustice, and focus attention on the experiences of marginalized people and communities. Today LACMA joins other arts institutions in remembering those lost to the AIDS epidemic, and in celebrating art as an instrument of activism.