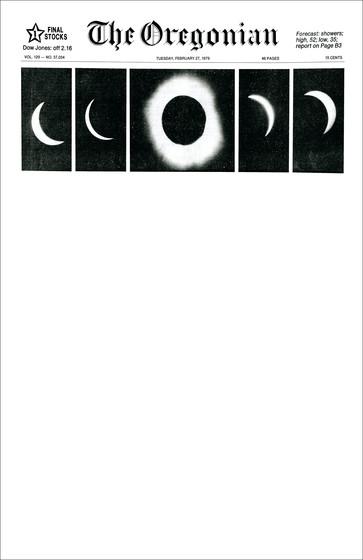 Sarah Charlesworth, The Arc of Total Eclipse, February 26, 1979 (detail), 1979, printed 2012, from the series Modern History, University of California, Berkeley Art Museum and Pacific Film Archive, gift of Seymour and Alyce Lazar, new printing made possible by a bequest of Phoebe Apperson Hearst by exchange, 2004.34.1–29, © 2017 The Estate of Sarah Charlesworth

In honor of both the eclipse and the conceptual artist Sarah Charlesworth, who made it her subject back in 1979, Los Angeles artists Jody Zellen and Brian C. Moss conceived of this work after viewing Sarah Charlesworth: Doubleworld.

They thought: what would happen if we recreated this project today? They each took note of the newspapers in play in Charlesworth's The Arc of the Total Eclipse with the intent of recreating the multi-part piece with photographs posted in newspapers on August 22, the day after the 2017 event.

An important aspect of her work was the trajectory, and a bit of research made it clear that the trajectory of the eclipse was different in 1979. Their intent was to make a quick re-creation as an homage, taking advantage of the ease of the internet to find and modify news imagery (fake eclipse news, anyone?). Another interesting aspect included determining which newspapers from Charlesworth's project still exist today and how they've changed.

Jody Zellen invariably works with the news as content, creating projects such as The News Wheel, recently on view at L.A. Municipal Art Gallery, and a portion of which—as lenticular photographs—will soon enter LACMA's permanent collection.