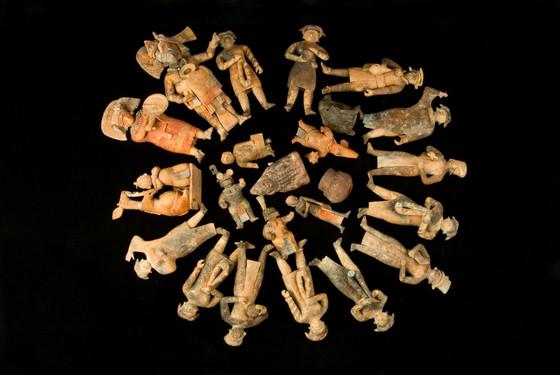 An enchanting scene of 23 ceramic figurines, arranged by mourners in a circular configuration inside a royal tomb chamber, tells a story about the ritual life of the ancient Maya. This scene includes a deceased king accompanied by his animal spirit companion—a magical deer wearing an oval pendant with a motif in the shape of a capital “T” incised into it. For the ancient Maya, this was the Ik’ symbol, which represented breath, wind, and life. 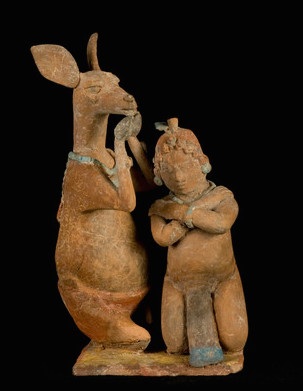 This marks the deer as the deceased king’s guide in his passage through the underworld to his resurrection. 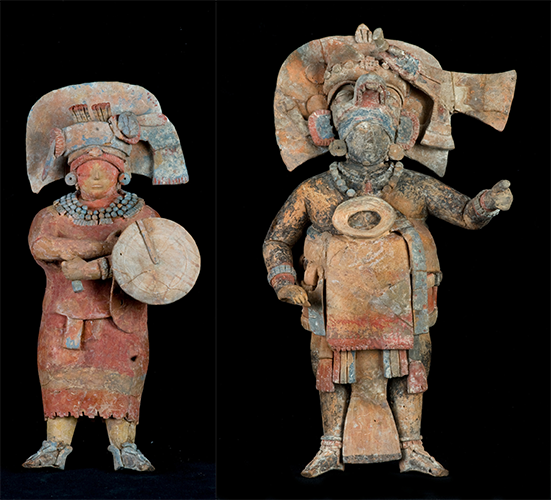 They are joined in a circle by other ancient Maya royals: the warrior queen who proudly holds a shield; a living king wearing the rich, multi-layered textiles befitting his station; the heir to the throne presenting an enema syringe to deliver hallucinogens integral to the ceremony; and dancers, scribes, and ladies performing in this sacred event. These actors are joined by other, more formidable beings, who have access to the supernatural and can conjure deeper power: a female shaman whose face is contorted in an ecstatic howl, dwarves with removable helmets ready to engage in ritual boxing to bring life-giving rains, and a dwarf with a deer helmet holding a conch shell trumpet that will be played not only for music, but also to open the portal to the underworld. 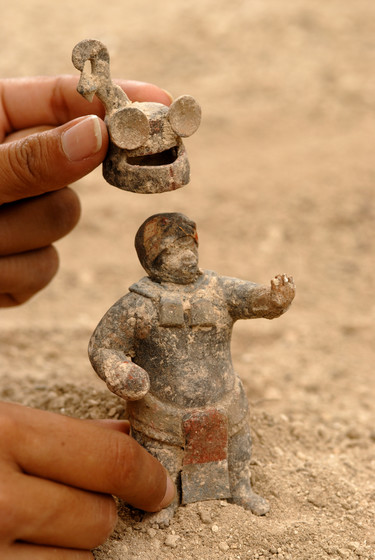 LACMA’s exhibition, Ancient Bodies: Archaeological Perspectives on Mesoamerican Figurines, which I curated, features this Maya Ritual Resurrection Scene. It was revealed to us through archaeological excavation conducted by myself, Varinia Matute, and a stellar team of trained specialists and excavators from both the U.S. and Guatemala. It was 2006, and we were working in a monumental pyramid at the ancient city of El Perú-Waka’, located in Laguna del Tigre National Park in Petén, Guatemala, inside the Maya Biosphere Reserve. 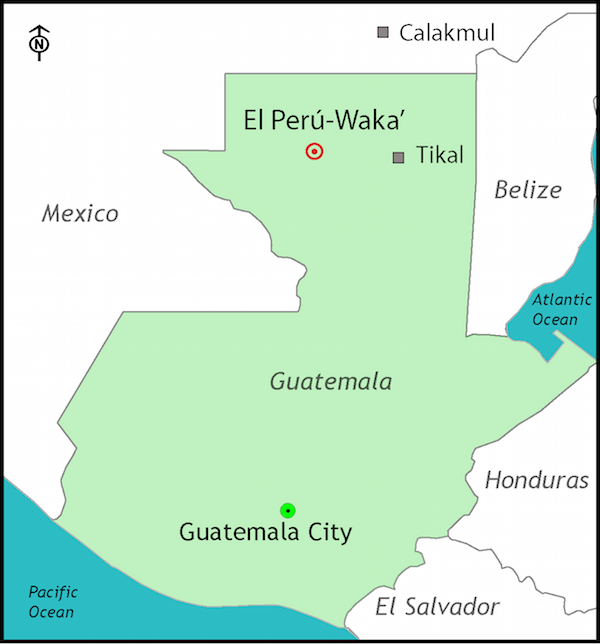 I am still a member of the El Perú-Waka’ Regional Archaeological Project (PAW), and am honored to be part of a team that continues to conduct diverse research at the site. Waka’ is persistently under threat by illicit activities such as looting and park invaders who set fires to burn down the jungle for grazing cattle or establishing squatter settlements within the park boundaries. These activities also endanger the natural resources within the park, including the remarkable animals that were sacred to the ancient Maya, such as scarlet macaws and stealthy jaguars, who often fall prey to poachers and hunters. Our project, as well as other archaeological projects throughout Laguna del Tigre and adjacent parks, provide a stable presence to help deter illegal activity. When we can, we collaborate with the Wildlife Conservation Society, a critical organization actively trying to preserve this area of the Péten. 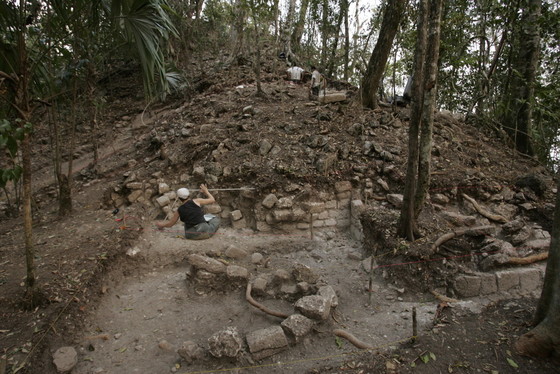 The figurines were arranged as described above by mourners engaged in their own ritual. They were burying a deceased ruler of Waka’ in a vaulted masonry tomb chamber built inside of the imposing pyramid, prosaically known as Structure O14-04. This was the 39th burial excavated at Waka’, hence the official recordation as Burial 39. The ruler was laid in majesty on the funerary bench—also crafted of cut stone—along with objects comprising the mortuary assemblage. 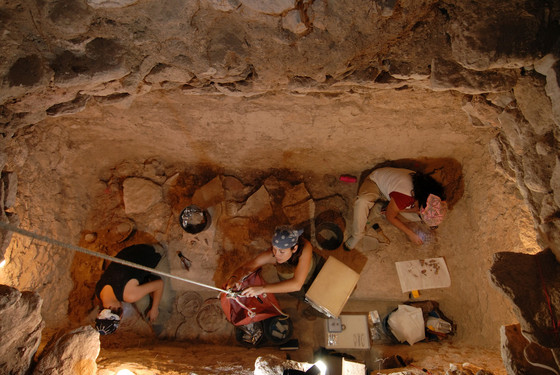 We excavated 32 ceramic vessels, greenstone earflares, a jadeite mosaic mask, and many other artifacts typical of Classic period tombs. These elite contexts help us understand the “one percent” of ancient Maya society, but archaeologists are interested in learning about all levels of society and aspects of the past. As such, PAW is composed of a well-rounded team of investigators researching everything from ancient soils to settlement zones to palace architecture. In Burial 39, along with the previously mentioned artifacts favored by the passage of time, the tomb would have also burgeoned with contents archaeologists in this subtropical region do not normally have the good fortune to record. These include foodstuffs offered to sustain the deceased in her or his journey, and items fashioned from animal hides, paper, wood, gourds, feathers, and the rich textiles that we know served as tribute in ancient Maya royal courts. In Burial 39, we were lucky to encounter the remnants of fabric, not from the ruler’s clothing, but from material used to wrap the body prior to interment. It took me three days of excavating skeletal elements with these bits of “stuff” adhering to them to realize what it was—even as an experienced archaeologist, I had never seen fabric in an excavation!

Because of the techniques we employed during the excavation of Burial 39, we preserved this remarkable ancient arrangement that brings three-dimensionality to the scenes we see on Classic period polychrome vases (see associate curator Megan O’Neil’s Unframed post on chocolate for several examples of vessels with various scenes). As an archaeologist, it is a special privilege to work in the cities, buildings, and tombs that were sacred spaces to the ancient Maya, and we view them as such today. Our efforts to record these contexts brings a richer story to the Maya past, and I’m thrilled to have had the opportunity to collaborate with the Museo Nacional de Arqueología y Etnología in Guatemala City to bring the Maya Ritual Resurrection Scene to LACMA.

Ancient Bodies: Archaeological Perspectives on Mesoamerican Figurines is on view through February 4, 2018. Visit the Wildlife Conservation Society to learn more about their efforts in Petén and across the globe. 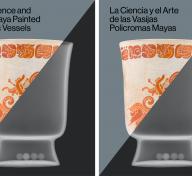 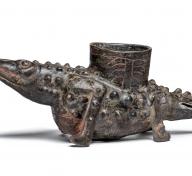 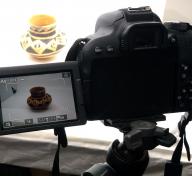