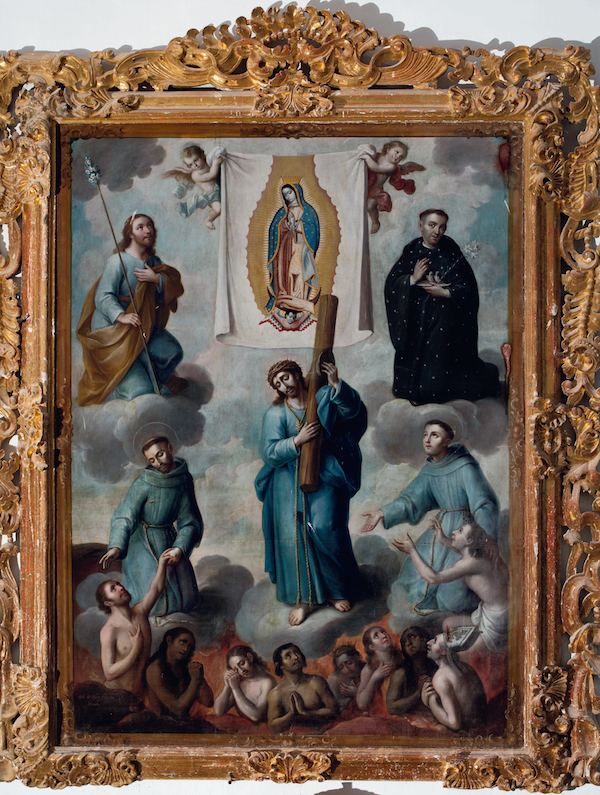 A Community Votes: The Journey of a Painting from Aguascalientes

Co-organized with Fomento Cultural Banamex, Painted in Mexico: 1700–1790: Pinxit Mexici  brings together over 100 paintings, many restored and exhibited for the first time. Several works were gathered from churches across Mexico, including a monumental painting by José de Páez (1721–c. 1790), one of the best of his career. It shows souls in Purgatory presided by the Virgin of Guadalupe; the one being pulled out of Purgatory by Saint Francis is likely a portrait of the artist, given that his signature appears on the flames below the figure. Commissioned in Mexico City for export, Páez took special care to paint a trompe l’oeil frame in case one would not be available locally.

Below, José María Lorenzo, exhibition coordinator at Banamex, and LACMA curator Ilona Katzew discuss the process of procuring this splendid loan and what it means for Los Angeles.

Detail of José de Páez’s The Virgin of Guadalupe, Christ Carrying the Cross, Saints, and Souls in Purgatory, c. 1770–80

Ilona Katzew: José María, after the exhibition curators completed their checklist, you made several road trips to collect and pack the works from various churches across Mexico. Can you describe what happened when you first arrived at the church of San Blas in Aguascalientes? 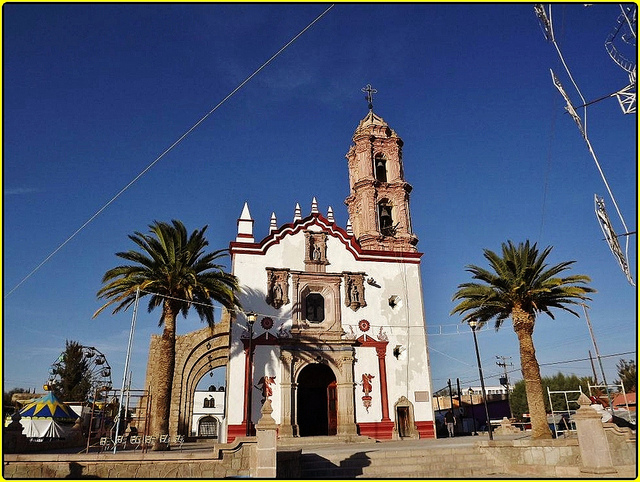 José María Lorenzo: After the four curators finalized the checklist, at Banamex we started planning the trips to collect the works and bring them to Mexico City. The loan from the parish church of San Blas in the Pabellón de Hidalgo (Aguascalientes) posed a unique set of challenges. For nearly three months we had been trying to reach the priest, which proved very difficult. Fortunately, Teresa Edna Rendón Olvera, a conservator from the Instituto Nacional de Antropología e Historia (INAH) based in Aguascalientes, was able to facilitate a meeting with the priest and the community to give us the opportunity to introduce the project.

IK: Why was the community initially so skeptical about lending the work to the exhibition?

JML: Many communities, not only San Blas, are suspicious of institutions and outside people, in part because many religious works have been pillaged from local churches, and also because they’re not always aware of how an exhibition is organized and what this means. Some communities are also fearful that their work(s) will either be damaged, not returned, or exchanged for another.

In the case of San Blas, the support of our colleagues from INAH (including Paula Mues Orts, one of the exhibition’s co-curators who put us in touch with Teresa Edna Rendón) was key to not only gathering the community but also persuading them of the significance of the exhibition. 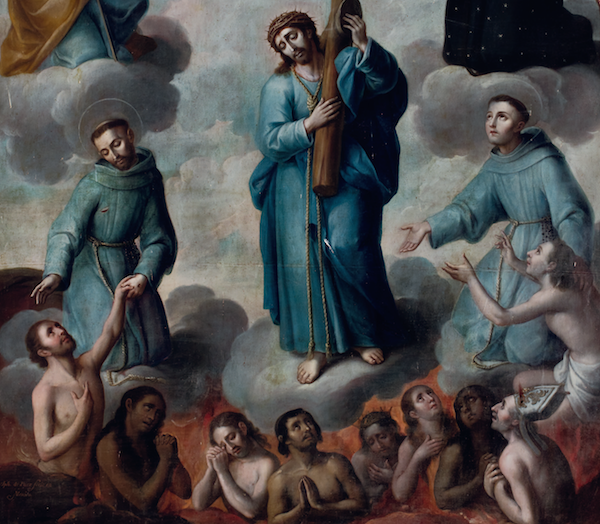 Detail of José de Páez’s The Virgin of Guadalupe, Christ Carrying the Cross, Saints, and Souls in Purgatory, c. 1770–80

IK: What tipped the balance and convinced the community to lend the work?

JML: The experience was truly sobering. From the moment we were summoned to the church’s assembly room, it was very clear that the community had a unified front, even if people had different views about things. At the beginning some 20 people had gathered there, but gradually more parishioners trickled in, and by the end of the meeting there was a robust group of some 90 people, including men, women, and children.

The first to speak was Father Guadalupe Acero; he introduced me and Teresa, the INAH conservator, to the community. Teresa explained the importance of including the work in an international exhibition such as this, and the great advantage of having their work restored. I then did my best to convey the significance of having viewers learn that San Blas was the custodian of such an exceptional work, of the caliber of the exhibition, and the great care with which the loan would be handled. 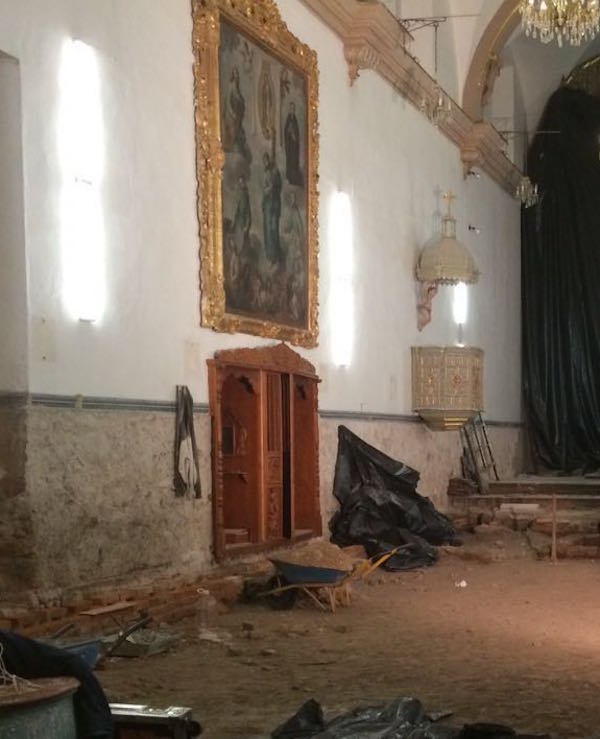 IK: How did the community respond?

JML: After I finished talking, the priest invited the community to voice their opinions before voting. Many people spoke at the meeting. Some were keen on lending it so it could be restored, while others were truly excited to have it travel to Los Angeles, in particular, because they had family there who had not seen the painting in years and could come visit it in the exhibition.

Understandably, some parishioners were concerned that once the picture left the church it would not come back or that it would be exchanged for a copy. They also voiced concern at having the exhibition organizers profit from showing it, which we explained would not be the case. The discussion got somewhat heated toward the end and veered into other matters associated with the community.

Finally, Father Guadalupe declared that he was in favor and that it was time to vote. Eighty people voted in favor of lending the picture, and some 10 people against it.

IK: In all, it seems that the community’s response was very positive, and that people were happy to share their treasured painting with their compatriots on the other side of the border. 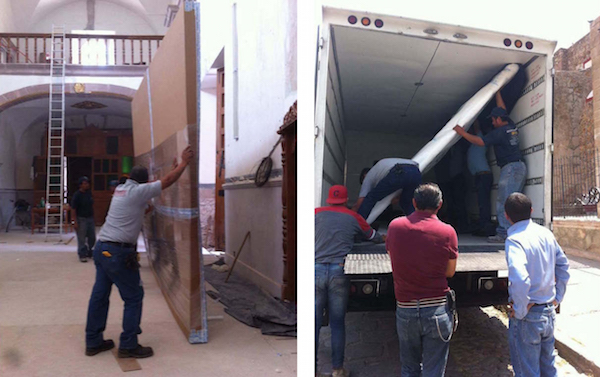 Left: Fomento Cultural Banamex packs the painting and gets it ready to travel; right: José María Lorenzo (in blue) oversees the painting being loaded to the truck

JML: Yes, absolutely. The next morning, we packed up the painting and transported it to Mexico City, where it was restored for the exhibition.

IK: When the curatorial group got the news, we were just ecstatic. And this is just one example of the many people involved in making the exhibition possible. Thank you, José María.

To learn more about this exceptional painting by José de Páez visit the exhibition at LACMA through March 18, 2018 and pick up a copy of the catalogue at the LACMA Store.