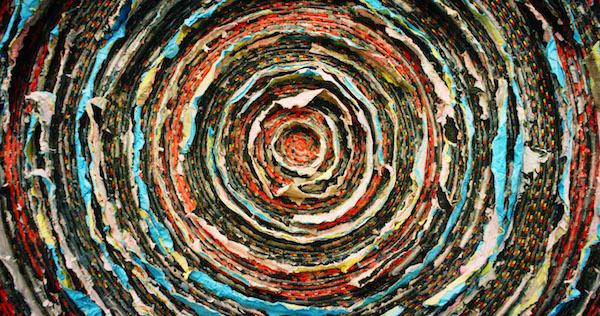 LACMA's short film Wild Wild West: A Beautiful Rant by Mark Bradford, directed by Dime Davis, is an official selection of the 2018 Sundance Film Festival. This enthralling six-minute film, which Elle Lorraine and I produced, captures Los Angeles artist Mark Bradford's artistic process as he creates a new large-scale painting called 150 Portrait Tone (2017). The painting was conceived after the fatal shooting of Philando Castile by a police officer in Saint Paul, Minnesota, in July 2016. Learn more about the painting, currently on view at LACMA, in this Unframed post. Before we headed off to Sundance, I chatted with Dime and Elle about their background and their experience making the film. 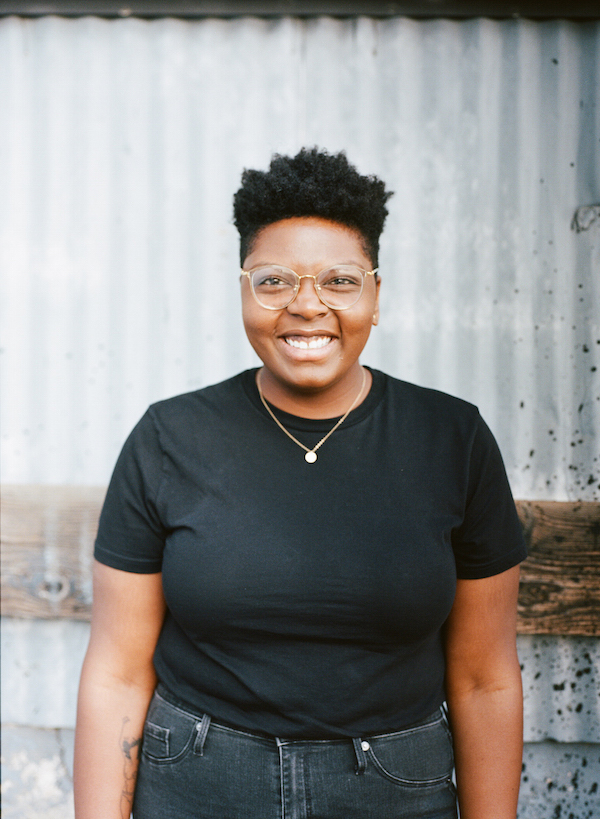 Dime and Elle, you are both from Houston and have known each other for some time. How did you meet and what brought you both to filmmaking?

DIME: We met as bright-eyed teenagers at the High School for the Performing and Visual Arts in Houston, TX. Elle was a performance major (she’s always loved the spotlight) and I found my passion building sets and turning stage lights on and off. In college, I started turning cameras on and off. After we moved to L.A., we learned that being starving artists was harder than we thought. So, by day we worked hard on our craft, producing our own material, making all of our mistakes early and with our own money. And at night, we raved about sports video games we never played. (Yep, we were social media consultants!) 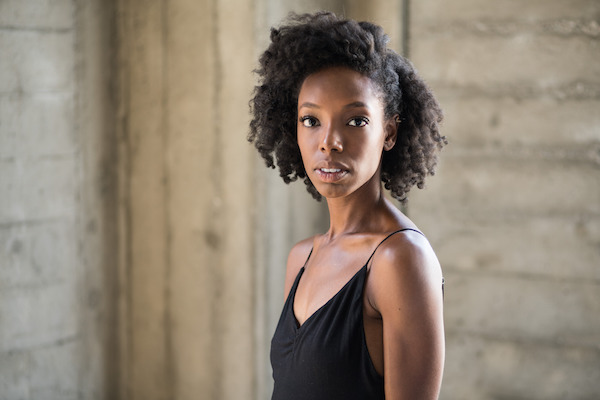 Which filmmakers have most influenced your work?

ELLE: Gina-Prince Bythewood and Sidney Lumet are two filmmakers who have had a major impact on how we approach our work. They are both incredibly versatile and have strong points of view. But at the same time, they are willing to look at each film as an individual piece of work, then do whatever needs to be done to serve that particular story.

Dime, what subjects are you most drawn to? Would you consider making another film about a visual artist?

DIME: Of course! Honestly, I birth stories from my experiences. From the women I grew up around, and the multicultural faces I see everyday. For me, Mark’s story was right in alignment with my core artistic values.

Elle, you are also an actress/singer. Do you prefer being in front of the camera or producing?

ELLE: First and foremost, I am a performer. It’s my passion. It’s why I’ve trained. It’s my most honest way of expressing. While I started producing out of necessity, Dime and I have found a way of co-creating that works perfectly for us. So, my favorite part of producing is actually the creative. We work in tandem at every stage, poking and pulling until we sculpt something that feels right. 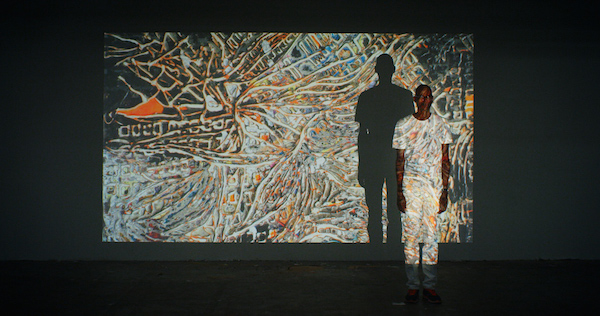 What's the most challenging aspect of making a documentary versus a narrative piece?

DIME: We chose to interview Mark on a day he wasn’t working on the piece and without a camera—audio only. The interview lasted nearly three hours and boiling that down to six minutes was not easy. Not at all. But what we ended up with was so visceral and bold, it made it all worth it. Very early on, we chose to be bold with every aspect of the film—the visuals, the interview, the editing, the music. So, the real challenge was making sure none of these elements overpowered another. We needed it all to work harmoniously for the piece to work as a whole.

The percussive music is an incredibly strong element in the film—how did you find chief waKiL? Did you know what sound you wanted from the beginning or did that come later in the process?

ELLE: We’ve work with waKiL in the past and knew he was perfect for this project. Dime had a pretty clear idea of what the music should emote, and sonically I knew that drums had the ability to provoke that response. So waKiL and I got into the studio and literally went cut-by-cut to bring the piece to life. (Dime watched. Ha!) 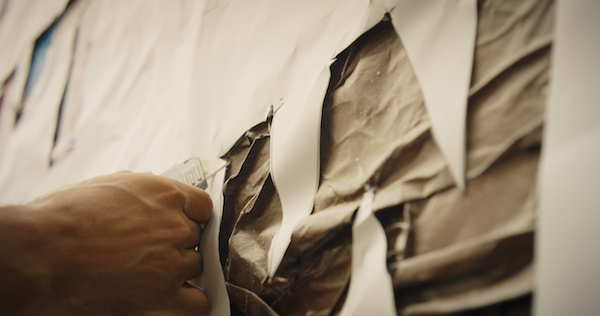 Dime, as you got to know Mark Bradford and his work while making the film—did you find any parallels to how you approach the creative process as a filmmaker?

DIME: There was one point in the creation of this piece, 150 Portrait Tone, where Mark was unsure about what he had created. To gain new perspective, he simply took a step back and looked at things from a macro level. For me, that was an incredible moment to witness. Theoretically, I know that every artist has those moments of uncertainty, but to see it up close, from this world-renowned painter, was absolute reassurance. The piece speaks for itself. 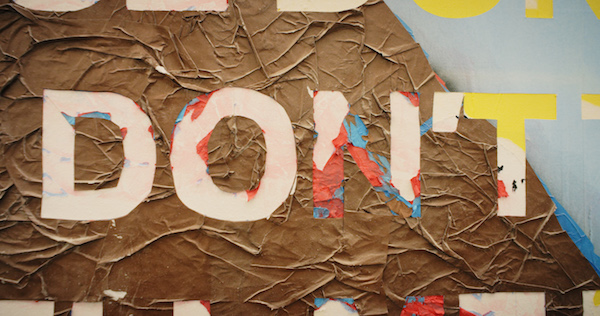 What struck you both as the most interesting aspect of Mark's work as an artist? Can you share how you developed the story?

ELLE: We spent a lot of time researching Mark’s body of work—which is absolutely incredible. But, what we kept coming back to was his process. We knew we wanted to showcase Mark’s creative process and use it as the focus of our story, letting the construction of his art hypnotize the audience in the same way his finished pieces do.

Is there anything you wish you could have included in the film but weren't able to?

DIME: If I could do it all over again, I’m not sure I’d change anything. But there is one shot, or lack thereof, that keeps me up at night. A very wide, very slow push-in of the final piece installed at LACMA. That would have been dope. 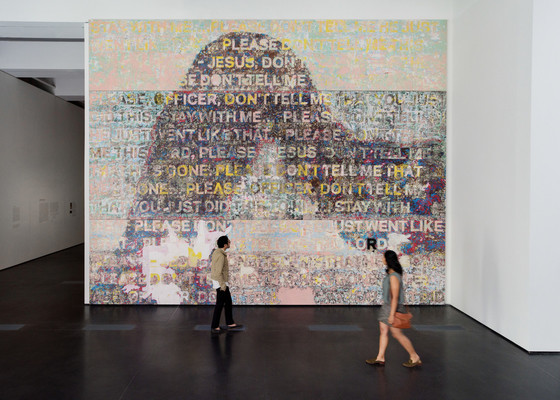 Mark Bradford, 150 Portrait Tone, 2017, courtesy of the artist and Hauser & Wirth. Commissioned by the Los Angeles County Museum of Art in honor of the 2017 Art + Film Gala © Mark Bradford

Having documented the process of 150 Portrait Tone being made, what did it feel like to walk into the museum and see it completed and installed?

ELLE: It was overwhelming. Even though we spent so much time with the piece, no one could have prepared me for how it would feel looking up at those words.

What do you hope to achieve with this film?

What's next for you both?

ELLE: The reaction to Wild Wild West: A Beautiful Rant by Mark Bradford has been spectacular. And for Dimecg and me, it has really reiterated that there is a place for our voices and style of storytelling. We’ve got several projects we’re hoping to have very fruitful discussions about while at Sundance. Just as long as we can withstand the cold!