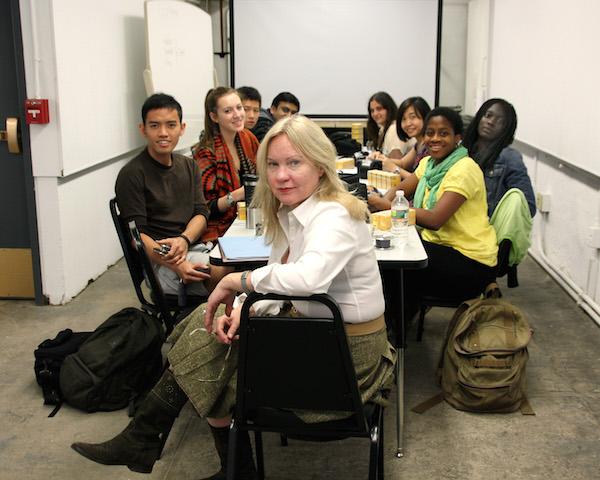 For two years, beginning in 2012, Sarah Charlesworth and I co-chaired photography in the Visual Arts Program at Princeton University. We shared a third-floor office in the Lewis Center for the Arts, a repurposed elementary school and home to Visual Arts. We both taught on Wednesdays and often found ourselves sitting across from each other before class. We looked around our computers and exchanged smiles as we feverishly prepared our slides and readings. Sarah and I had both exhibited at Jay Gorney Modern Art in the late 1980s and we saw each other occasionally at openings, but I didn’t really get to know Sarah until we teamed up at Princeton.

Sarah and I split a position but for the first semester I was still living in California. During that time, I visited New York and ran into Sarah and her class at MoMA. She had brought them to see the New Photography show and it was apparent that the students were having a great time and that they adored Sarah.

A short time later Sarah and I spoke on the phone to try to figure out how to run the photo program and what classes we would teach. That two-hour phone call, with Sarah speaking from her house in western Connecticut and me seated in a eucalyptus grove near my office at UCLA, was our first extended conversation, although we had known each other for 15 years. I remember that we both remarked on how odd it was that two Pictures Generation artists, who in our own ways took stances critical of mainstream photography, were now teaching in an institution that had hitherto represented a more conservative photographic ethos. After I hung up, I felt giddy about the opportunity to collaborate with Sarah and rethink the program with her.

When the semester started, I quickly saw how much Sarah loved teaching at Princeton. Perhaps she also loved working at her previous schools, but I suspect that this was her favorite job. She was just so happy to be here teaching and setting up the new photo studio. She drove down every Wednesday morning in her Volvo station wagon, the back of it cluttered with gardening tools and baskets. After class, I’d see her meeting with her junior and senior mentees before driving back to the city after sunset.

If Sarah arrived early at the Lewis Center, we’d go to the faculty club for lunch. Sometimes we’d see Hal Foster and eat with him. Or we might see P. Adams Sitney, and join him. We both liked P. Adams who was a known curmudgeon and taught film in our department. At one lunch, we, or rather Sarah and P. Adams, began arguing about which group of artists were better writers, the Structural filmmakers or the Conceptualists. P. Adams railed against the conceptualists. Sarah, who liked to argue, defended the conceptualists: I studied with Douglas Huebler. He could write! And what about Joseph Kosuth? He was a great writer. By the time we all left to teach our classes. nothing was settled but Sarah had valiantly held up our side in the dispute.

Sarah and I taught the same class, Beginning Analogue Photography. Throughout the semester I was always trying to catch up to what her class was doing. For someone whose own artwork seemed so hands-off, she managed to teach students the basics of photography in a very impressive manner. After we had our final critiques and hung our respective classes’ work in the student gallery, I felt that Sarah’s students had learned more than mine. But there would always be next year for me to improve.

One day before class Sarah suggested that we go to the MoMA photography forum that evening. As usual she drove and along the way we chatted about photography, scanners, her new work, the demise of Cibachrome paper, Jane’s and my house in Los Angeles, our students, galleries. Close to the city the traffic was terrible and we inched through the Lincoln Tunnel in fits and starts. I was anxious. How would we park? After 7 pm you can park anywhere in Midtown, Sarah confidently stated. She had it all figured out.

When we finally arrived at MoMA, we were painfully late. The forum was on abstraction and photography and the Q and A had already started. Everyone turned and looked at us when we entered and stood in the back. Roxana Marcoci immediately asked me a question about abstraction but I was too burned out from the drive to come up with answer. I quickly handed the question off to Sarah and, of course, she had an opinion about the questions around abstraction and photography, which she answered eloquently.

One day, sitting together at our desk before class, Sarah told me about a young photographer, Michele Abeles, whose work she had just seen. I don’t know her but I really like the work. Go see the show and tell me what you think, she said. I wasn’t able to see the show but I trusted Sarah’s judgement and she brought Michele in to teach a beginning digital class the next year. Sarah didn’t know Michele but based on the work Sarah knew that Michele would have a lot to offer the students.

The last time I saw Sarah was at the Napa Valley Grille in Westwood with Jane and Sara VanDerBeek. The two Sarahs were in Los Angeles working on a group show at Margo Leavin Gallery. VanDerBeek was a generation younger than Sarah but they conversed about the show as equals and I could see how much pleasure Sarah took in working with a younger artist.

Sarah was always looking to the future, always thinking about the next artist or the next semester. When Sarah died unexpectedly, she had just begun creating a syllabus for an introductory class on photographic literacy. She was thinking about what photography had been and what it could be in the future. I wish I could have read the syllabus and talked to her about the class. It was terribly sad to see Sarah’s brilliant mind extinguished just as it was coming to into full radiance.

Visit Sarah Charlesworth: Doubleworld in the Art of the Americas Building through February 4, 2018.