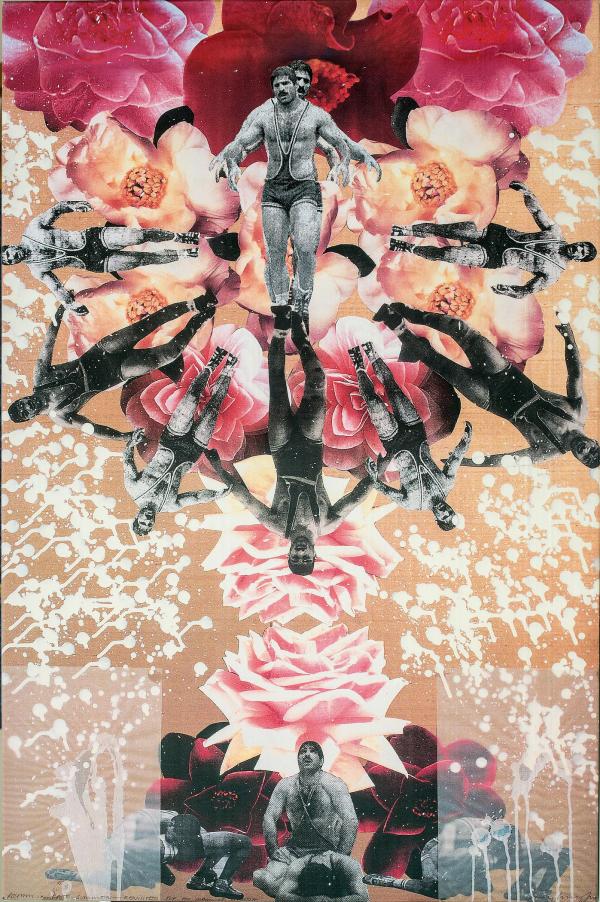 Time and Again: The Intersection of Past and Present in Iranian Art

In spring 2014, while driving past Vali‘asr Square, one of Tehran’s busiest intersections, I was startled to see on the side of a building a huge billboard of President Barack Obama standing beside a menacing-looking man clad in armor over a red robe and a helmet festooned with red feathers. As I later understood, the towering image appropriated and recontextualized a central event from the early history of the Shi‘ite branch of Islam, the majority faith of Iran. It referenced an incident in 680 when the villainous Shimr offered refuge to and then murdered the Imam Husain at Karbala, in Iraq. Meant to convey a contemporary political message, it subtly linked Barack Obama with Shimr’s odious duplicity. Shimr’s distinctive wardrobe, with its red accents, reflects not a seventh-century context, but rather the domain of ta‘ziya, a Shi‘ite passion play performed by costumed reenactors, something that would be recognizable to most passersby in Vali‘asr, though not as yet to me. But what struck me was the assured and authentic manner in which this anachronistic pair of figures was presented, something familiar to me from my study of both historical and contemporary Iranian art.

The image of Obama and Shimr continued to intrigue me. This mixing of past and present for the purpose of political or social messaging is an important and longstanding characteristic of the art of Iran. It occurred to me that this visual manipulation of time and space might be a topic worth pursuing as an exhibition, especially as it would combine my twin interests in historical and contemporary art. Additionally, like for most of us, time and the possibility of time travel is something that fascinates me; this show would be about an art that willfully bends time and obscures place, rather than conforming to the sometimes forced linear narrative that we associate with traditional art history.

As part of my research for the project, I developed a small obsession with the previously noted ta‘ziya, a traditional Persian theatrical genre in which the story is conveyed through music, recitation, and costumed reenactors. In ta‘ziya, there is a dramatic device known as guriz or guriz zadan (meaning “digression”), which has allowed such performances to extend beyond the confines of time and space—to simultaneously exist, for example, in present-day Tehran and seventh-century Karbala. I wondered if a similar concept existed in the visual arts of Iran, where past and present are often made to seamlessly merge. I have not yet answered that question, nor do I know where this interpretation of guriz might lead. But given the paucity of surviving texts on artistic theory and criticism from earlier periods in Iran, perhaps the present, in this case, may better inform us about art and artistic practice in the past. 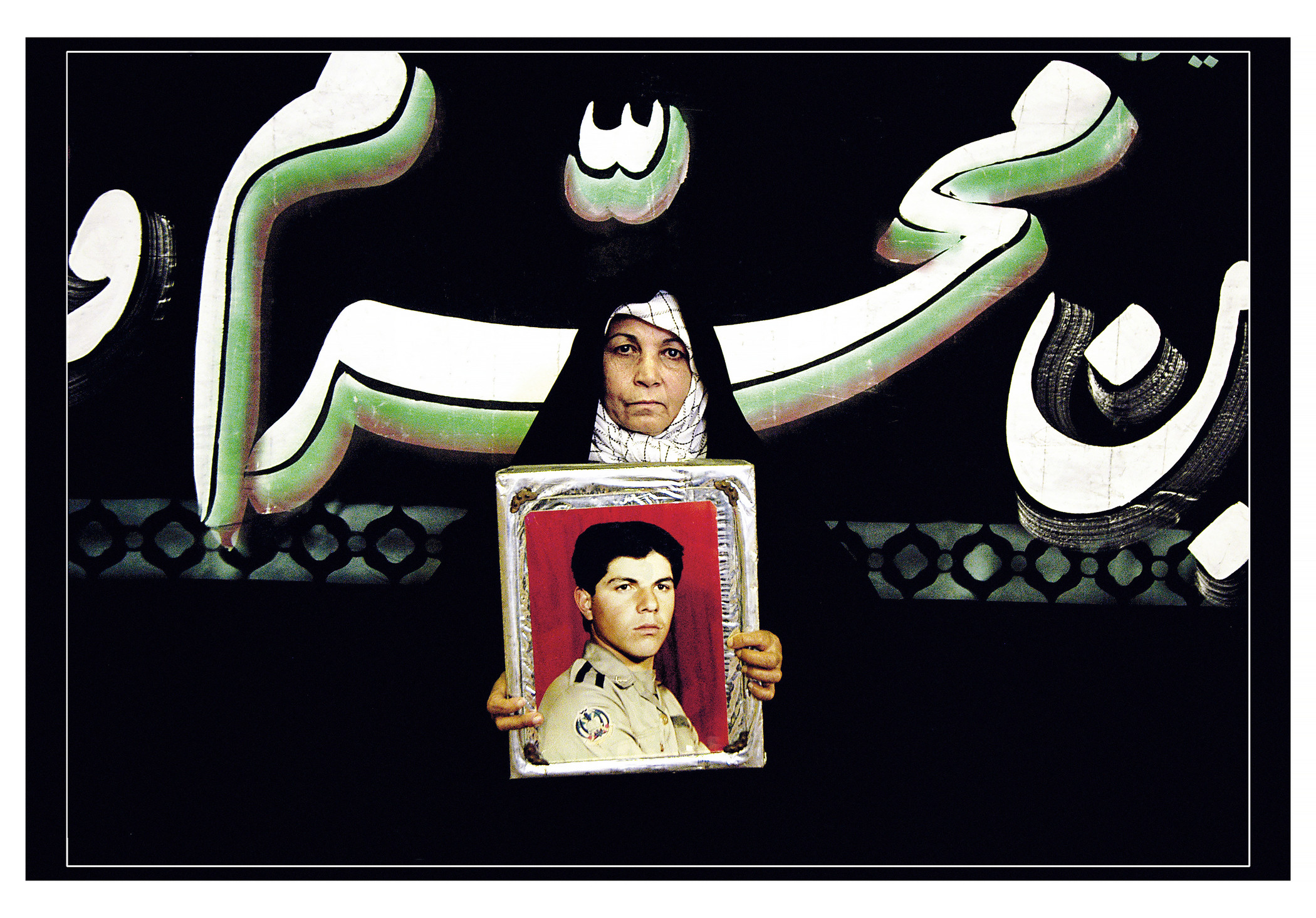 About Time: Defining the Topic

The exhibition In the Fields of Empty Days: The Intersection of Past and Present in Iranian Art and its accompanying catalogue take as their theme the continuous and inescapable presence of the past in Iranian society, as reflected in both the previous anecdote and the poem excerpted at the head of this essay. This notion is revealed in art and literature in which long-ago kings and heroes are used in subsequent contexts as paradigms of grandeur and virtue, or as objects of derision and malevolence, while long-gone Shi‘ite saints and martyrs are evoked as champions of the poor and the oppressed. 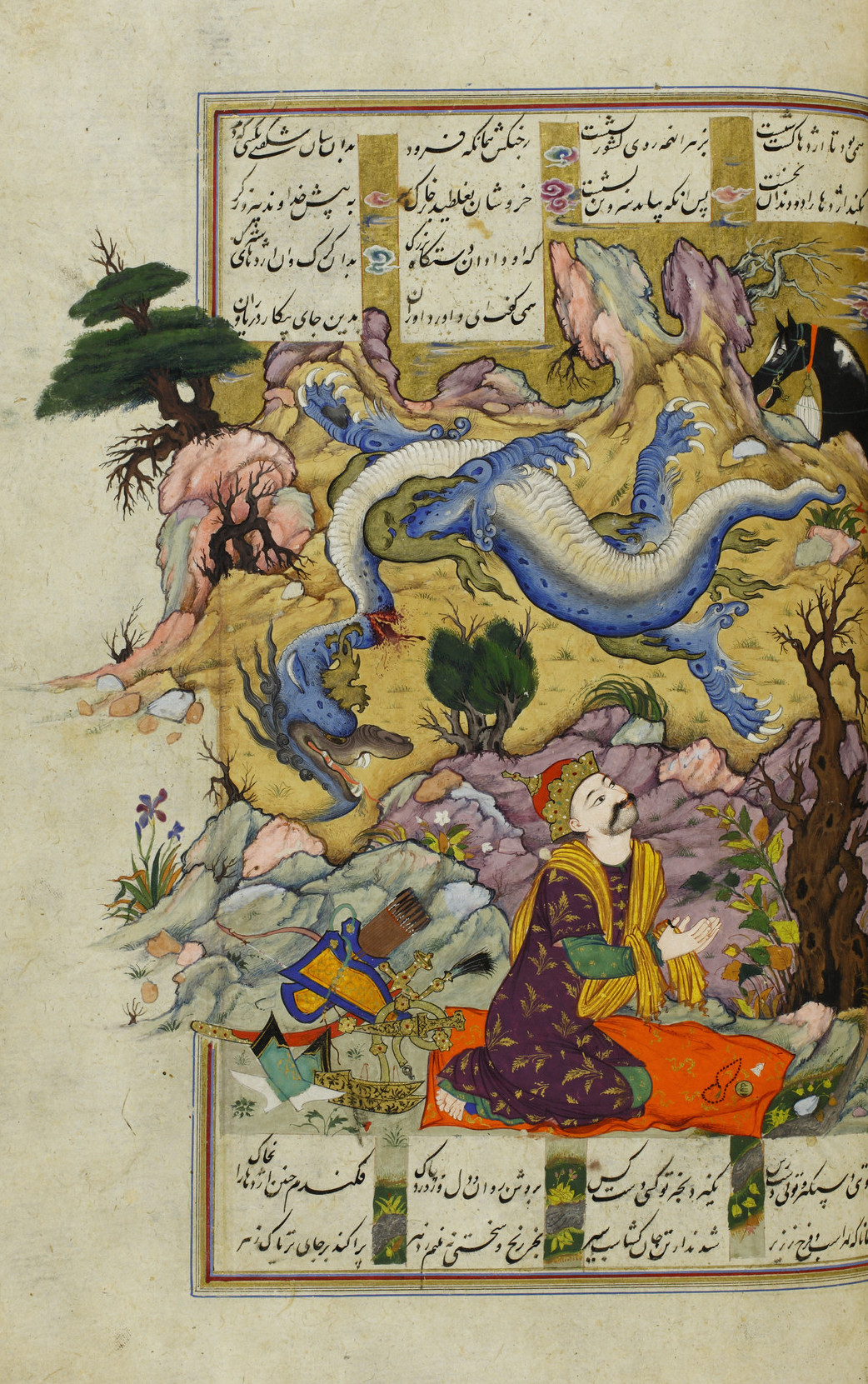 The connection between kingship past and present manifests most significantly in illustrated versions of the Shahnama, or Book of Kings, the Iranian national epic, which, though written in the Islamic era, tells of the pre-Islamic kings and heroes. From the first such royally commissioned manuscripts, from the period of Mongol rule in Iran (1256–1353), the ancient kings were recast as contemporary Islamic rulers. The visual identification between the sovereign, often himself not a Persian, and earlier Iranian kings was deliberate and significant, used to validate the ruling elite. This type of politically motivated patronage helped ensure the cultural and aesthetic importance of the Book of Kings through the end of the 19th century; its kings and heroes are embedded still in Iranian culture.

Iran’s adoption of Shi‘ite Islam as a state religion in the early 16th century also helped fix the past irrevocably in the present through the cycle of remembrance ceremonies for the martyred Shi‘ite Imams, most notably Husain, grandson of the Prophet Muhammad. Murdered with his family and companions at Karbala, Husain is commemorated each year on the anniversary of his death (known as Ashura) through ta‘ziya theater. Audience members become participants in this emotionally charged and graphic ritual in which they experience the killings and mourn the slain in present time. The story was also pictured through large-scale paintings that survive only from the late 19th century; these in turn, along with ta‘ziya performances, inspired artists to paint similarly sized images based on the Shahnama. 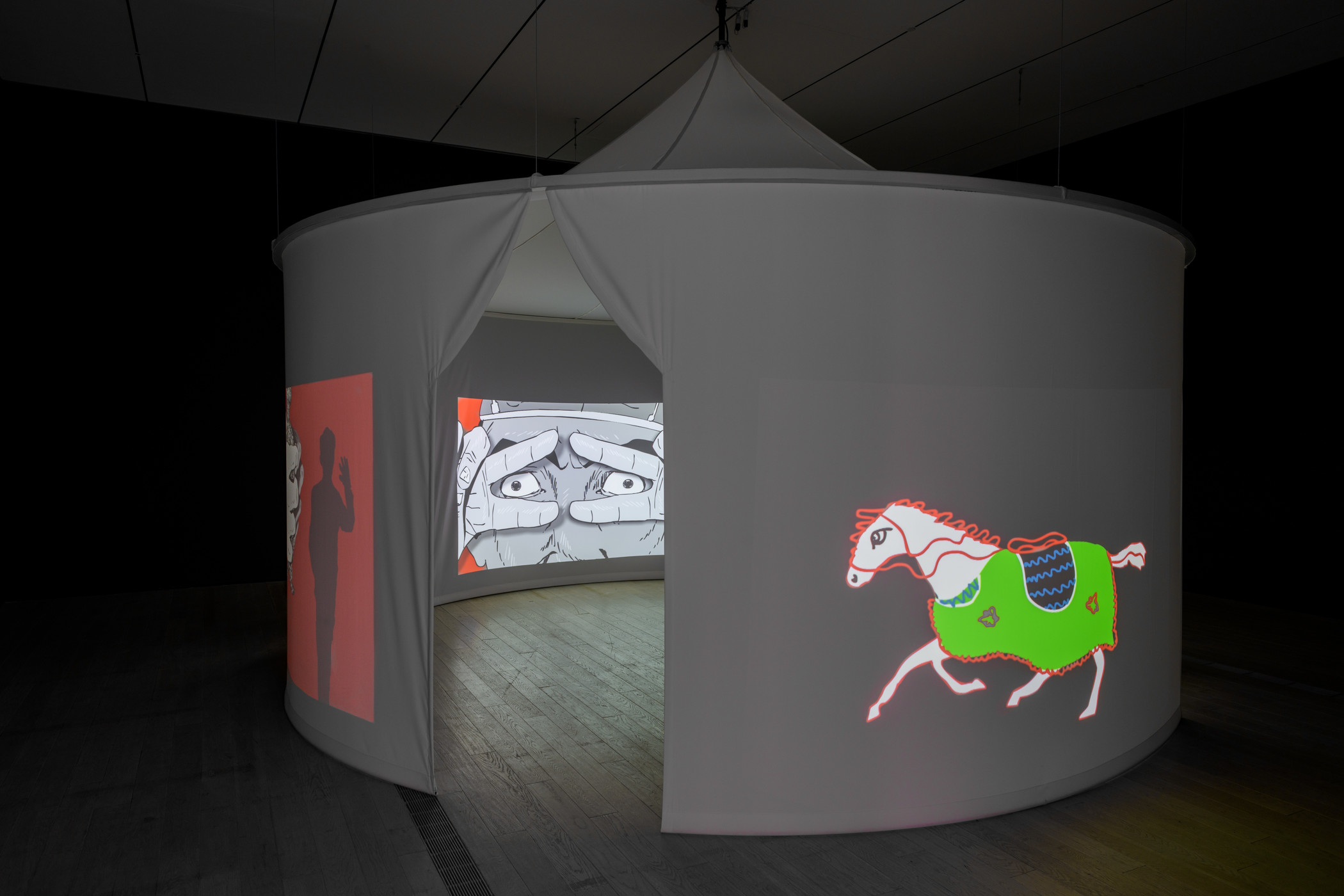 Installation view, In the Fields of Empty Days: The Intersection of Past and Present in Iranian Art, Los Angeles County Museum of Art, May 6–September 9, 2018, art © Pouya Afshar

Both of these strands—ancient kings and heroes, and martyred Shi‘ite Imams—carry forward, even sometimes overlapping, in contemporary Iranian art. While the past once was visualized in terms of the present, by the second half of the 20th century the present began to be rendered anachronistically as a form of often barely disguised political and social commentary. 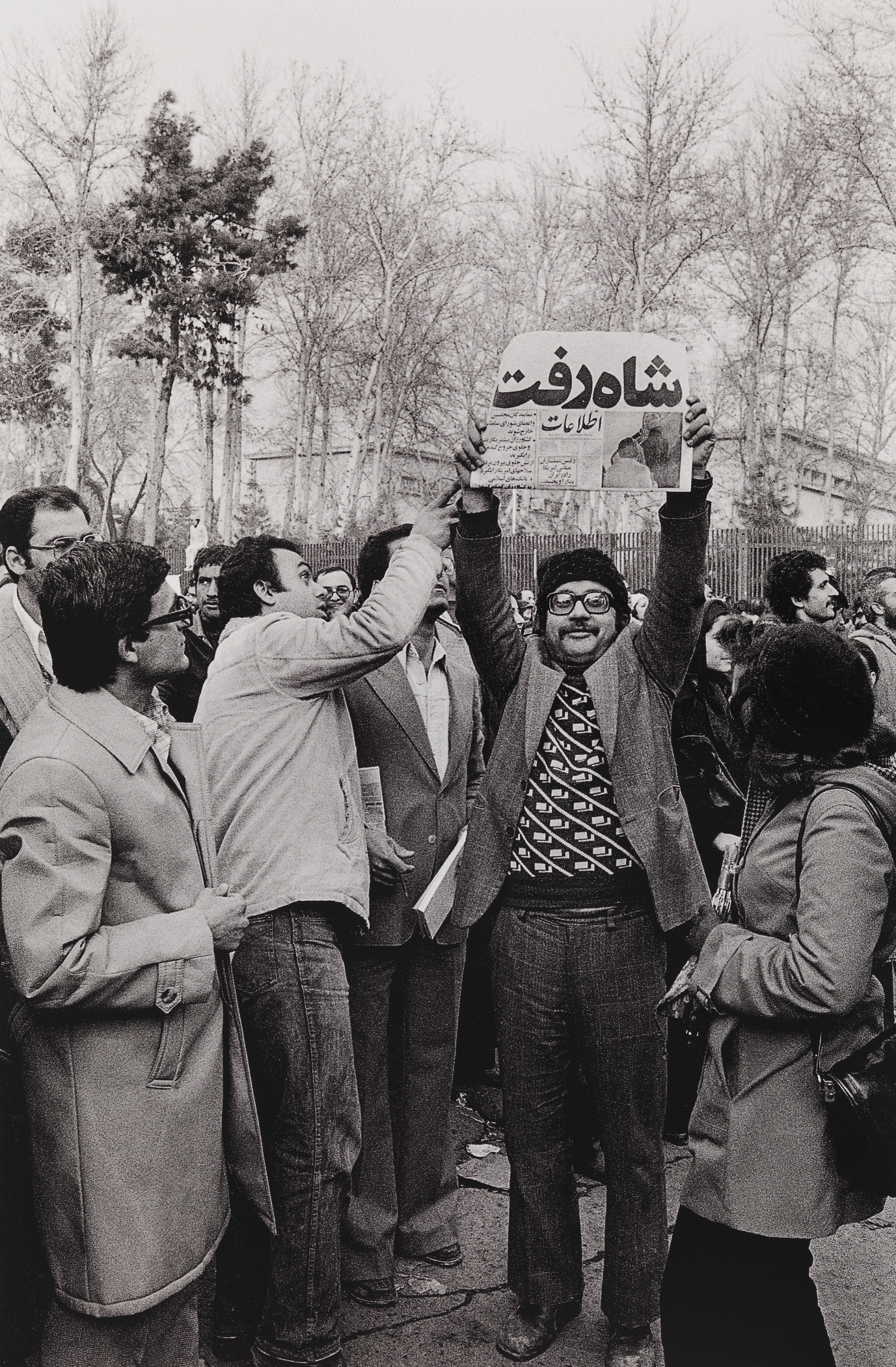 In the Fields of Empty Days examines this appropriation and recontextualization of the past, largely in the context of the present. It covers a wide swath of Iranian art, including Safavid manuscript illustrations as well as Qajar-era photographs and other works, but it concentrates primarily on the art from the final years of the reign of Mohammad Reza Shah (r. 1941–79) in the 1970s, through the Islamic Revolution of 1979, and up to the present day. This is a novel and admittedly unusual approach to Iranian art that reveals that, by evoking the past, Iranian artists have created and continue to create new visual metaphors to describe their present day.

In the Fields of Empty Days: The Intersection of Past and Present in Iranian Art opens on May 6. Member Previews are May 3–5. Not a member? Join now! This post is an excerpt from the exhibition catalogue, on sale at the LACMA Store.