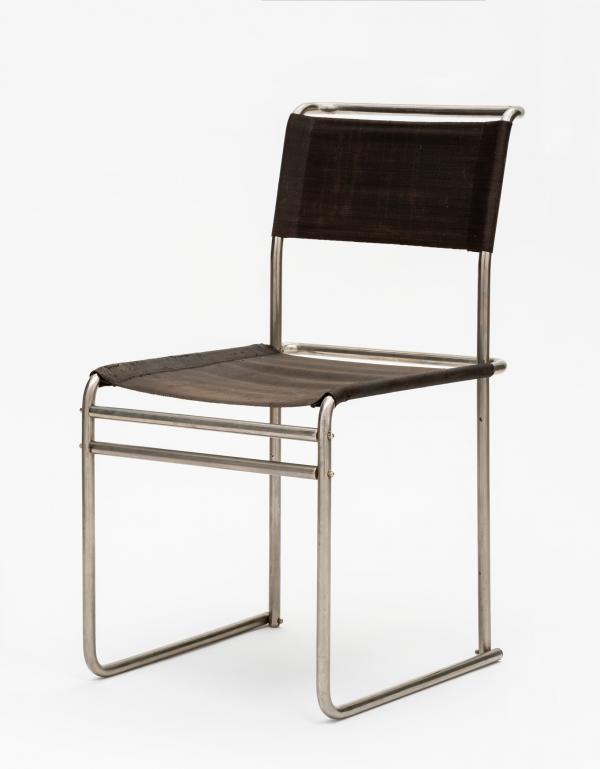 Bauhaus at 100: Spotlight on Marcel Breuer

Several important works from the Decorative Arts and Design collection are on view as part of LACMA’s The Bauhaus at 100: Modern Legacies, in the Ahmanson Building, Level 2. One is Marcel Breuer’s B5 side chair, an essential chapter in the development of modernism.

A Hungarian architect who taught at the Bauhaus in Germany, Breuer famously became interested in tubular metal as a material for furniture after observing its strength and durability on the bicycle that he rode around the school. The geometric simplicity of his B5 side chair makes it a quintessential example of Bauhaus design, demonstrating Breuer’s mastery of orthogonal form while preserving subtle visual detail, such as the parallel front stretchers and rhyming handle and seat. Its simple geometries of a cubic base and perpendicular planes of fabric show how Breuer simplified the chair to its barest minimum.

One of four designs Breuer developed in the mid-1920s from tubular steel, the chair appeared in the Breuer-furnished dining room of Erwin Piscator, a German theater director and member of the German avant-garde (a related version was designed for the home and atelier of László Moholy-Nagy). The chair was first produced by the Berlin firm Standard-Möbel. Production continued after that firm was sold to Thonet in 1928, with the chair remaining in demand for decades. The chair retains its original “Eisengarn” fabric, a specially developed, ultra-durable, waxed cotton.

Come visit Bauhaus at 100: Modern Legacies through May 5, 2019 to view the chair and its original upholstery in person.