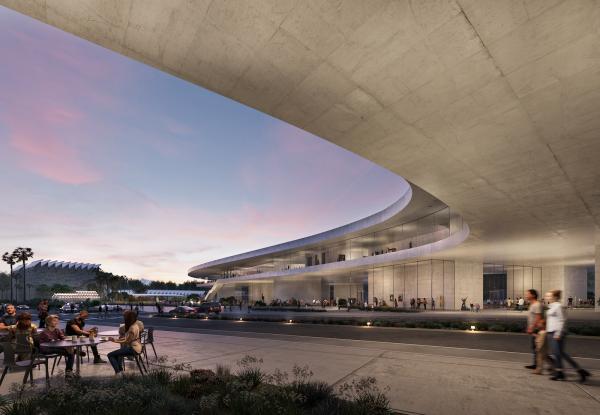 The design of an ambitious project like LACMA’s newest Wilshire Boulevard building is always hotly contested. As we move toward Tuesday’s county Board of Supervisors vote on our plans, I think key facts about the project have been lost in the debate about curves versus rectangles, and how big a museum should be.

The new Peter Zumthor-designed building is one part of an already begun, long-term plan to transform, expand and enhance the Los Angeles County Museum of Art’s galleries and public space. Between 2008 and 2010, we added 100,000 square feet of galleries when we opened the Broad Contemporary Art Museum building and the Resnick Pavilion, along with the Smidt Welcome Plaza and Ray’s restaurant and Stark Bar, all designed by Renzo Piano. The next phase of the transformation is the replacement of four ailing buildings that have significant structural issues and are no longer in shape to exhibit art.

As early as 2001, LACMA’s board and the county came to the same conclusion: LACMA had to be rebuilt. Interestingly, architect Rem Koolhaas’ proposal, unveiled that year, shared elements with the Zumthor design — in particular a large single floorplate for the museum’s permanent collection, making its display open and easy to navigate. The Koolhaas design failed for two reasons: It proved too difficult to raise money, and no one wanted to close LACMA for five years to rebuild. Now those issues have been resolved. Eighty-five percent of the $650-million budget for the Zumthor building has been raised, primarily from private donors. And with the Piano additions in place, LACMA can remain open, with 100,000 square feet of gallery space, during construction of the new building.

When the new building is finished, we will have increased LACMA's galleries by nearly 70%, from 130,000 square feet (including the four crumbling buildings and the Japanese Pavilion, which is being renovated, not demolished) to a total of 220,000 square feet since the expansion began. That level of growth meets our master plan for LACMA’s development. All along, we’ve understood that we would replace — not enlarge — the space in the four buildings that must be demolished. Adding space would create significant and expensive environmental impacts, which couldn’t be absorbed within our budget.

Much has been made of the fact that in the final environmental impact report, the Zumthor building’s exhibition space is about 10% smaller than in an earlier draft. The change has been cast as a loss of space for the permanent collection, but our collections even now are often exhibited in the Broad or the Resnick Pavilion, as well as in the buildings slated for demolition. Losing what in the end may be a few thousand square feet compared to the earlier environmental report won’t hamper our exhibition program for traveling shows or for the permanent collection because the museum’s overall growth has been so great.

Such changes in a design of this nature are a normal part of the process. In this case, the “loss” gains us, among other things, a building that will be safer for the artworks and visitors. (Remember, LACMA sits above three faults and methane and oil deposits.)

Of course, everyone has their own ideas about the merits of the proposed building. Zumthor’s design represents a new vision for an art museum. We think it is particularly fitting for diverse Los Angeles.

The primary galleries will be continuous, connected, without a clear front or back and with no barriers such as stairs or elevators. The museum’s artworks, from every culture and era, will be on the same level — no culture privileged above another. The open design, we hope, will provide visitors with an incredibly varied view of the collection and a great art experience. And if they want more, the other buildings on campus will have just as much gallery space filled with art.

Natural light and views will reduce “museum fatigue” and link the gallery space to the urban and park environment outside. In collaboration with the Natural History Museum’s La Brea Tar Pits and Museum, the plan calls for 3.5 acres of added parkland, opened up by bridging Wilshire to make use of the property at the corner of Spaulding Avenue.

When the transformation of our Wilshire campus is complete, only 10% of this new and improved public space will have been paid for by taxpayers. The changes we’ve made so far, and our plans for the new building, have attracted gifts of art worth hundreds of millions of dollars. We’re by far the largest art museum in the Western United States, and over the last decade, attendance has more than doubled. In all measures, LACMA will continue to grow, but almost doubling in physical size on Wilshire Boulevard is enough for one 20-year evolution.

Now it’s urgent that we finish the job and complete the Zumthor building. We are grateful for the private and public generosity that has taken us this far, and we look forward to continuing to expand LACMA’s contribution to the artistic life of Los Angeles.