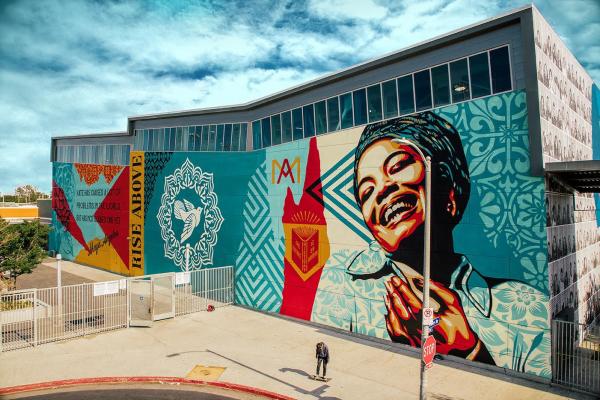 Mural by Shepard Fairey, photo by Jon Furlong for @obeygiant

Growing up in South L.A., I didn’t go to museums or galleries to look at art. What I do remember is that the exteriors of the local shops and liquor stores in my neighborhood were covered with images, messages, and writings. I also remember that sometimes shop owners didn’t appreciate that and would cover them with paint. I may not have known what the word “mural” was at the time, but I knew that the art on the walls spoke to the people and decorated our community. 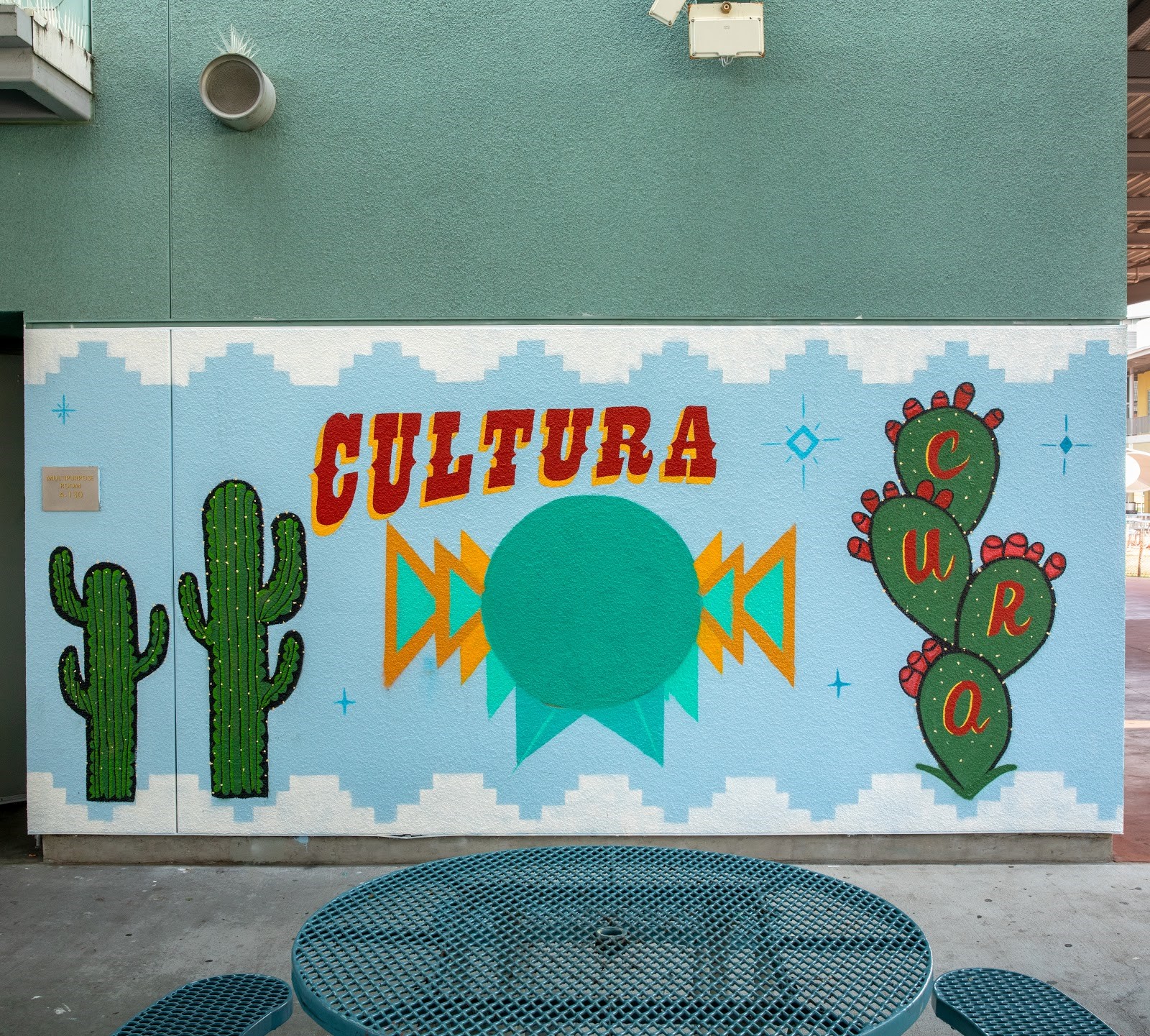 When Ms. Davidson, an art teacher at Dr. Maya Angelou Community High School, reached out to see if LACMA was interested in attending the community meetings for their upcoming mural festival, I instantly thought of this as a homecoming. Walking into the multi-purpose room on campus I could see there was an excited buzz going around. Synergy Quantum Academy shares the campus with Dr. Maya Angelou Community High School and had partnered with Branded Arts—an L.A.-based organization—to lead the Maya Angelou Mural Festival. Students, teachers, administrators, LAUSD staff, and community members were all in one room discussing the messages and images they wanted to see on the campus walls. I sat in that meeting feeling inspired and motivated, but most of all I knew I was meant to be there. 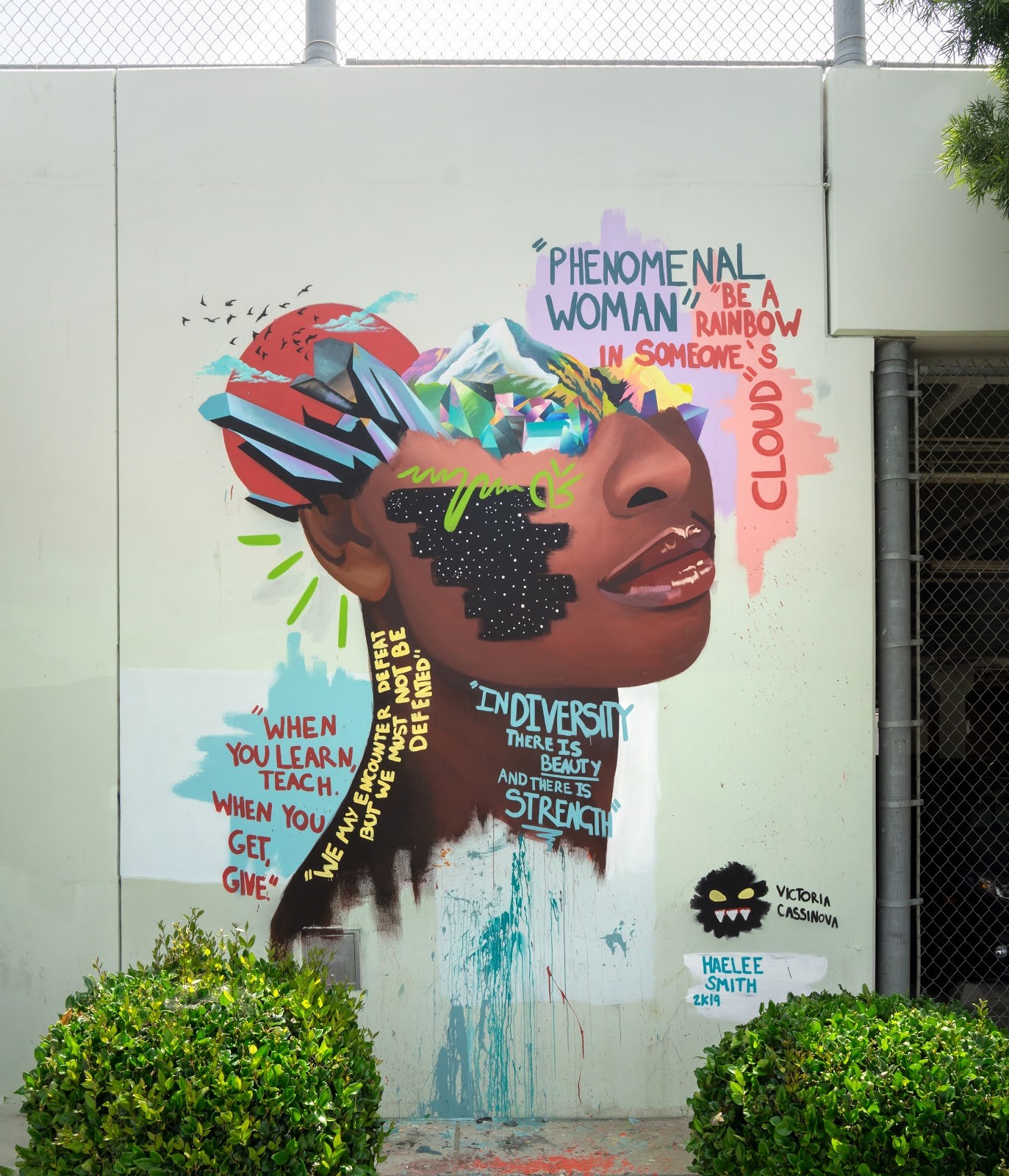 The students, school administrators, and LAUSD staff were heavily involved in the process. Many students voiced their ideas, and everyone heard them out and honored their opinions. Some students wanted to see stories about themselves on the walls, others wanted to honor their parents, while still others wanted their identities and the struggles of being a first generation student to be showcased. All these ideas and stories were considered for further discussions as the mural proposals were selected. 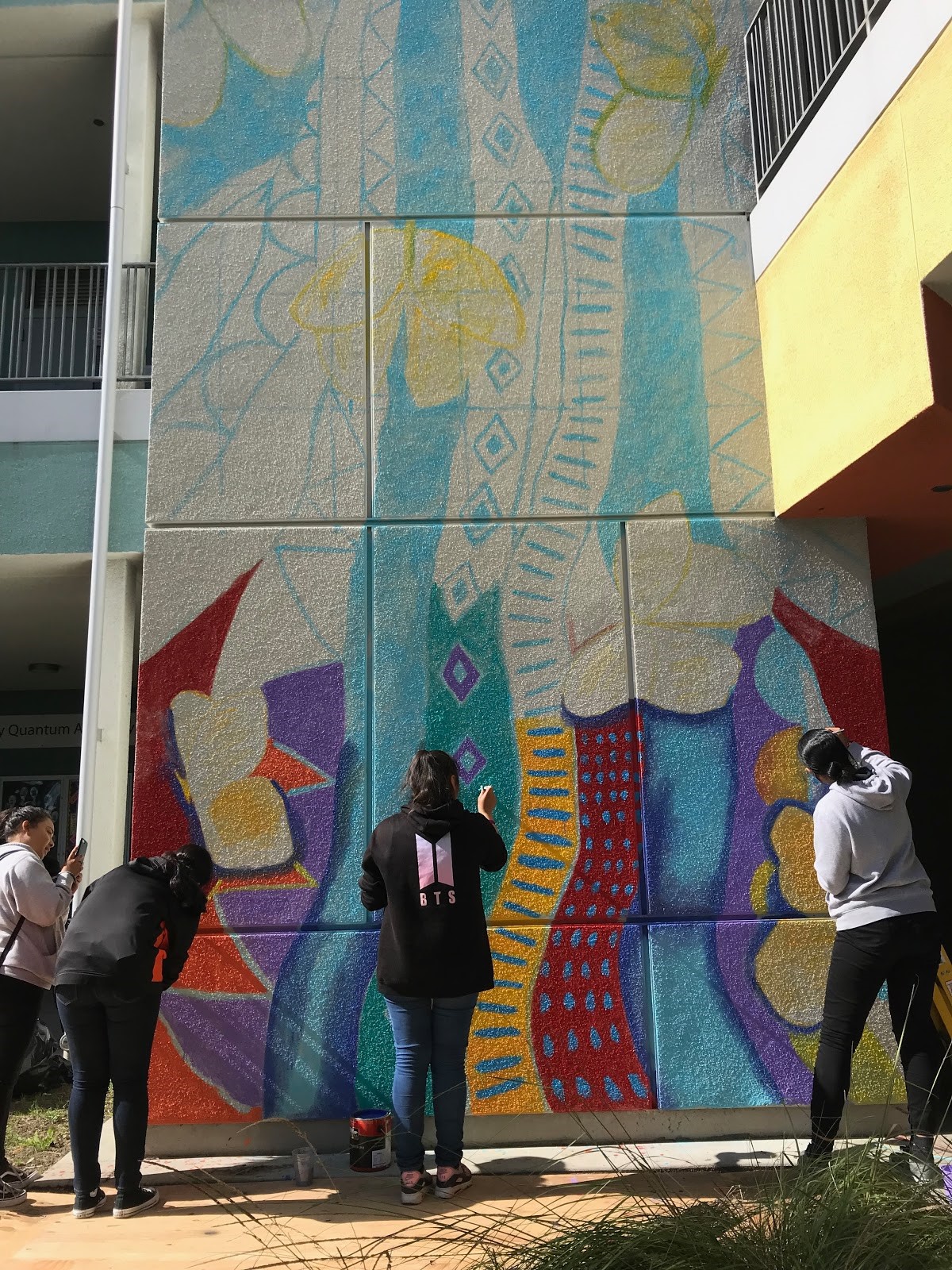 In the weeks leading up to the event, I worked closely with Ms. West, a history teacher at Synergy Quantum Academy, on how to better support the students during the festival. We met weekly, guiding the students and facilitating the research on every muralist. I was also able to offer tips on how to talk about art with a group of students in charge of encouraging interaction by participants. 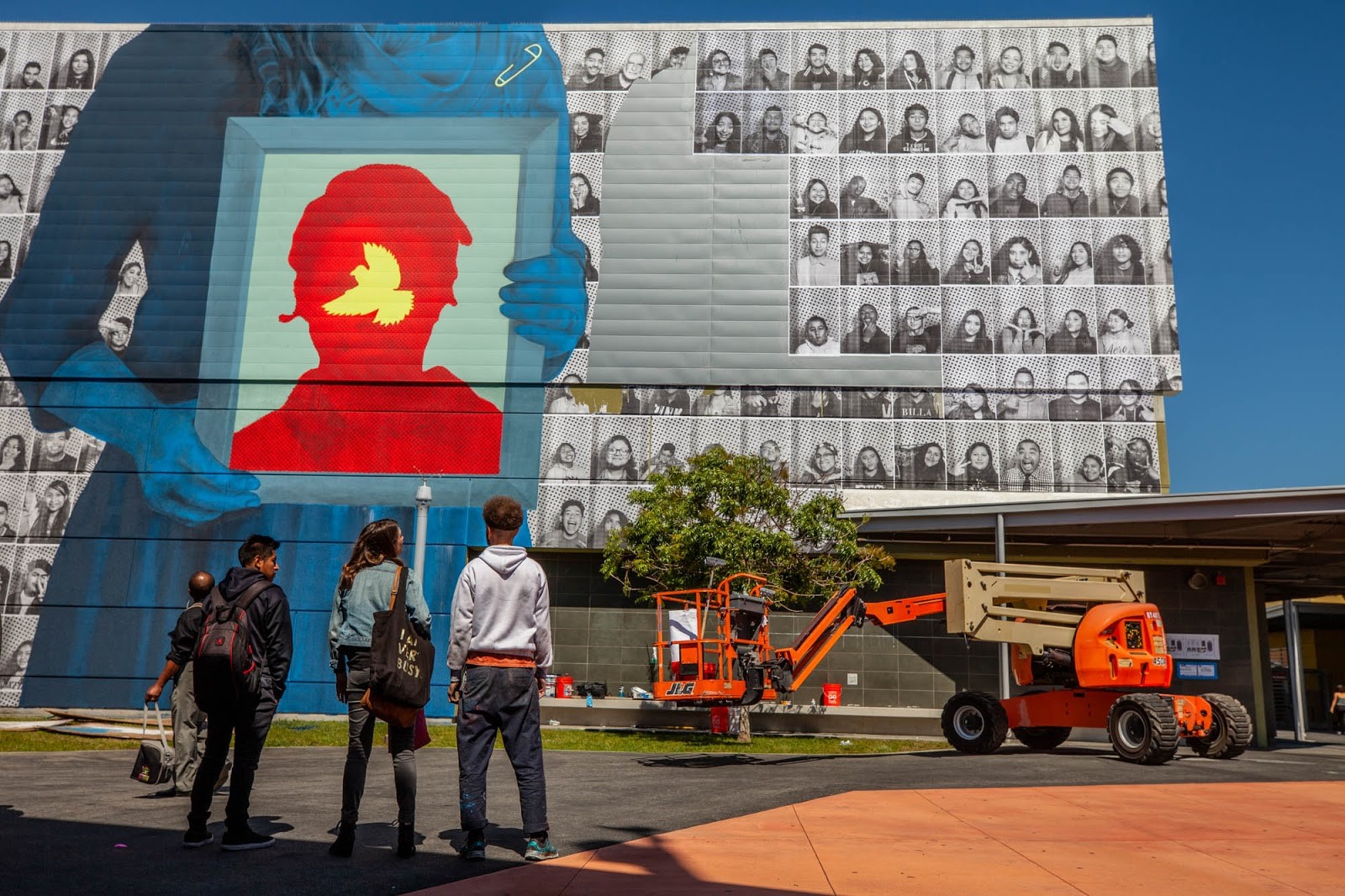 The festival took place May 13-17 and about 30 artists were commissioned to paint a series of murals throughout the campus. That same week, the gym was turned into a gallery exhibition featuring works from 50 artists and students. The schools facilitated the programming and public engagement projects like workshops and seminars.

While on campus during the festival, the atmosphere felt so alive. Students stayed after school every day that week to help out the muralists and participate in the activities. They were carrying buckets, painting walls, taking pictures, and observing the art-making while expressing their excitement. The campus felt so welcoming and united, and it was all because of the desire to have art displayed on the walls of the school. I couldn’t help but draw parallels to my own upbringing in South L.A. and the lack of formal art exposure I had back then. In reflection, I can now recall that this is how my love for art started at a young age. I was excited to experience this moment with a generation of high schoolers that will now see a reflection of themselves on their campus. Hopefully this experience made an impact and that the murals adorn the campus for many years to come. 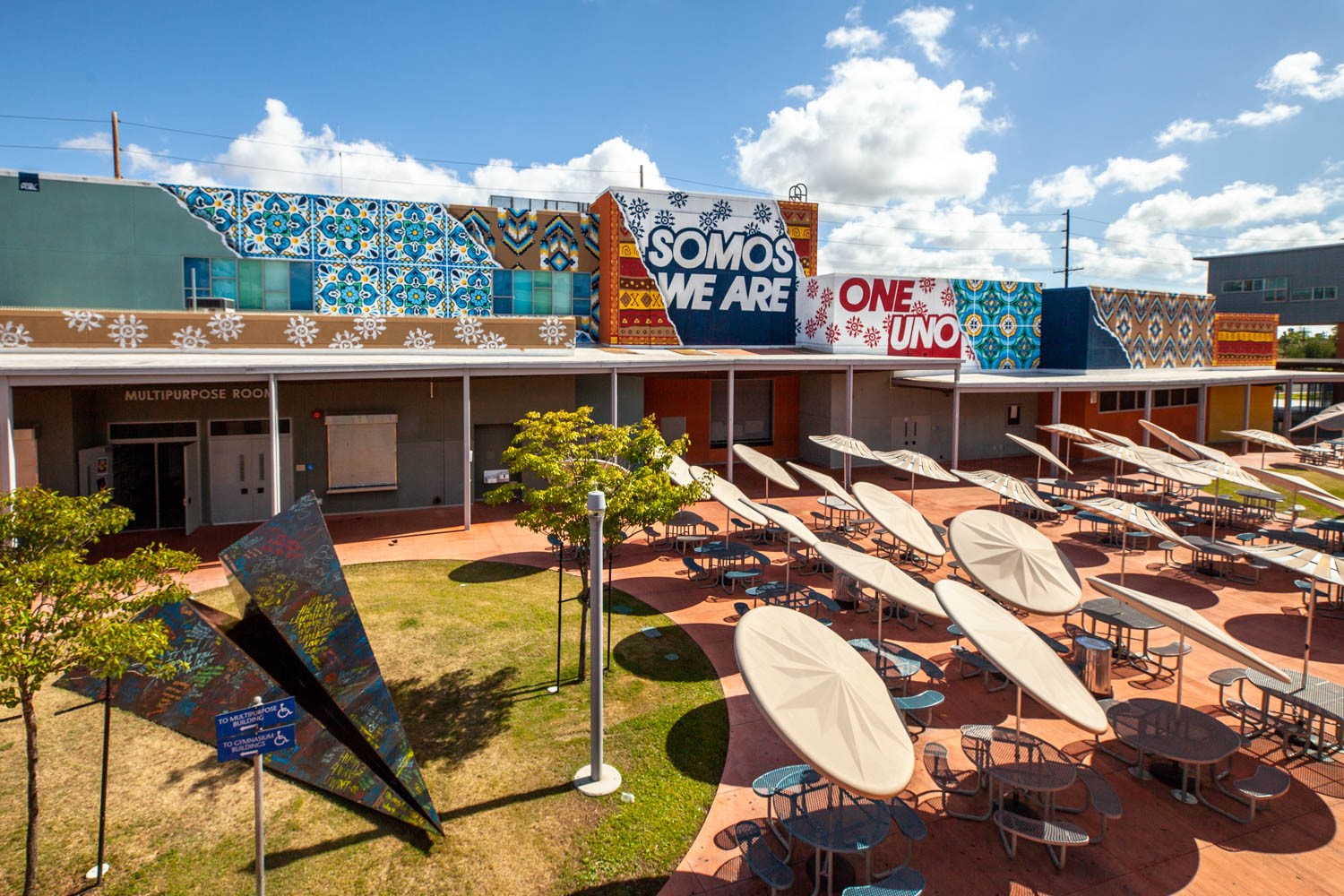 I want to thank all the muralists, Branded Arts, Warren Brand, Valerie Davidson, Elizabeth West, Mr. Guzman, Principal Hugo Carlos, and the students for allowing LACMA to be part of this beautiful journey.