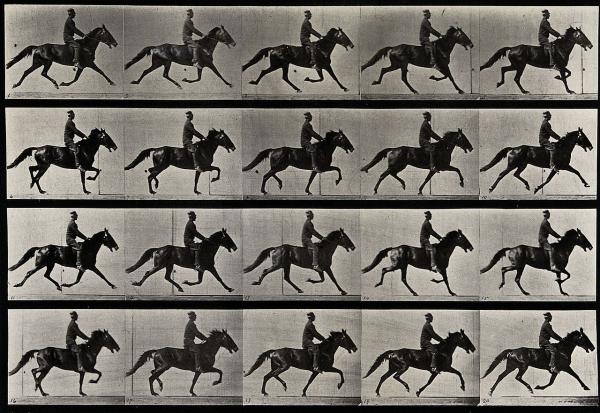 Still from Eadweard Muybridge's motion study of horses. Image courtesy of Wellcome Images, a website operated by Wellcome Trust, a global charitable foundation based in the United Kingdom.

Eadweard Muybridge: Human and Animal Locomotion, with a Live Score by Kite

In looking at the interconnected histories of photography and filmmaking practices, FILM at LACMA is highlighting the work of Vera Lutter. From February 2017 to January 2019, New York-based artist Vera Lutter was invited by LACMA to work in residence at the museum, creating a new body of work examining the campus architecture, galleries, and collection holdings. Vera Lutter: Museum in the Camera features the compelling photographs made during her two-year residency.

Lutter uses one of the oldest optical technologies still in use, that of the camera obscura. Before the invention of photography, it was known that if light traveled through a tiny hole into a darkened room, an image of the external world (off which the light rays had reflected) would re-form upside down on a wall opposite the tiny opening. By building room-sized cameras and placing unexposed photo paper across from a pinhole opening, Lutter has adopted the camera obscura as her singular working method, resulting in photographs with an ethereal, otherworldly beauty.

Early camera techniques, such as Lutter’s, are also foundational to what later became known as cinema. Similar to the camera obscura, the history of moving image practices date back millennia. However, the moving image as we know it now was not developed until 1872 when the former governor of California Leland Stanford hired photographer Eadweard Muybridge to prove that all of a horse’s hoofs left the ground while running. After validating Leland’s hypothesis, Muybridge further developed his study of the motion of horses and in 1978 created one of the first steps toward a moving image by placing 24 shutter-controlled cameras to record the galloping of a horse. Muybridge had images from his motion studies copied in the form of silhouettes onto a disc, to be viewed in a machine he had invented, which he called a "zoopraxiscope." This device was later regarded as an early movie projector, and the process as an intermediate stage toward motion pictures. Similar to Lutter’s work, these early motion pictures contain the spirit and the spectral quality of the moment in which they were captured.

Celebrating the convergence of film and its place within the history of the American West, we will be co-presenting a live stream screening of the motion studies of Muybridge with The Autry Museum of the American West on May 15 at 7 pm. Accompanying this screening will be a live score by Kite, aka Suzanne Kite; an Oglála Lakȟóta performance artist, visual artist, and composer raised in Southern California. Her performances, compositions, sculptures, and sound installations showcase the use of experimentation in new media and digital technologies that touch on issues such as non-human and human intelligence, the ethics of extractive technologies, and software design. Recently, Kite has been developing a body interface for movement performances, carbon fibre sculptures, and immersive video and sound installations, as well as co-running the experimental electronic imprint, Unheard Records. 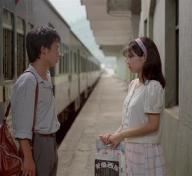