Wall of Sound: Music from the Collection of Yoshitomo Nara and the Art of Inspiration

When I first heard that Yoshitomo Nara's LACMA retrospective was going to have an installation of some of the records the artist listens to while he works, I was intrigued. When I found out that the display was going to be an entire wall of 352 records and I was going to be one of the preparators to work on it, I was super thrilled. I've always been really into music, and the thought of getting to flip through a famous artist's record collection was really exciting to me.

See, some of my earliest memories growing up are of my two favorite toys when I was a toddler. One was a toy record player and the other was a toy drum set. The record player didn't play real records, just toy ones that had crude grooves and notches that played music much like a music box when you set the "stylus" on it. The drum set I got a little later, when I was about five or six and very soon my parents realized the mistake they made. I played it constantly, but where most kids would just bang about without any rhyme or reason I, on the other hand, was really trying to teach myself how to play drums. I remember being annoyed that I couldn't make the sounds I heard on records and keep the beat. See, my father constantly played music in my house growing up. Mostly soul, funk, and R&B, but he also liked The Beatles and David Bowie.

That was the beginning of my obsession with music that has lasted me the rest of my life. Eventually, I took over, and "appropriated" my father's record collection. The turntable and all the albums made their way to my room and never left. In middle school, I made mixtapes that I recorded on a boombox off the radio (yes you read that correctly, I recorded tapes off of a boombox, I'm that old). The greatest thing I discovered, also in middle school, was the Columbia Record and Tape Club (CRTC). For those too young to remember, the CRTC would offer to send you 10 or 15 records or tapes for a PENNY! All you had to do was to agree to buy 10 or 15 more records or tapes at regular prices over the course of a year. Naturally having no job or income, but still wanting access to that amount of music, I would constantly order the tapes for the penny and then cancel my subscription as soon as they arrived. 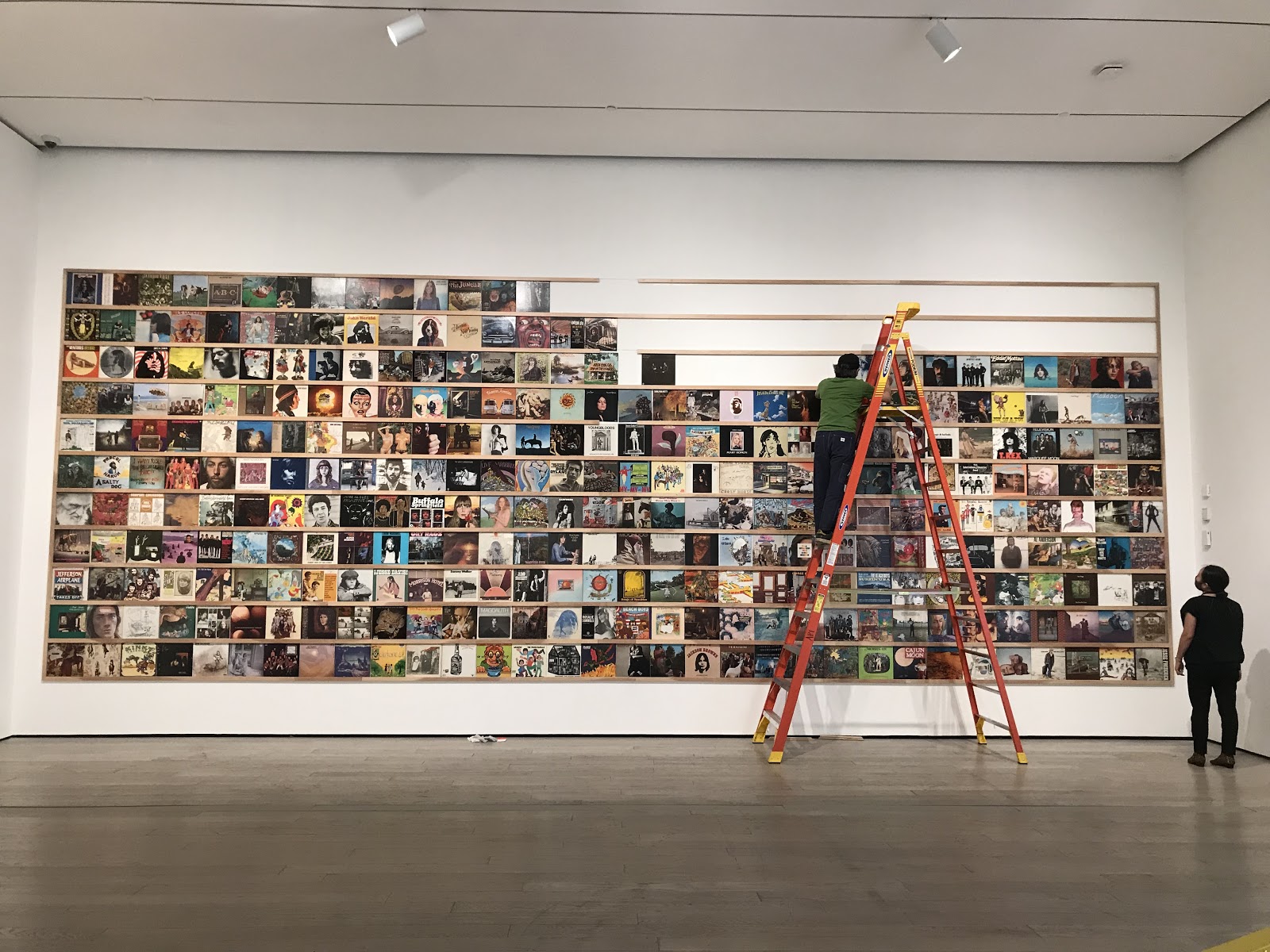 When I did get my first job working at Wendy's in high school, I spent most of my check on music. Not counting Sam Goody or Musicland at the mall, there were two record stores where I grew up. One was Peaches Records and Tapes, and the other was a local record store called Plan 9 Records. Peaches bit the dust about 10 or 15 years ago, but Plan 9 is still there. Plan 9 was my favorite because they had a basement that was all vinyl. And in the all vinyl basement is where a friend turned me on to hardcore and punk music. See I grew up in Richmond, VA about an hour and a half from Washington, DC, so they sold all the 45s and albums from DC bands like Scream, Minor Threat/Fugazi, and Bad Brains. Like most people, Bad Brains changed my life for the better. This was when I really started to get back into records and, similar to the artist Yoshitomo Nara, a lot of the appeal was album covers and artwork.

For me, there's nothing like the LP record as far as an artistic medium. The imagery, the physicality of playing a record, and meticulously reading through the liner notes became a ritual with each new find. It's an almost obsession that's led to my continually growing collection of about 3,000 albums, about 650 CDs, and about 250 cassette tapes. Eventually, I started DJing and beatmaking and spent hours "digging in the crates," looking for certain songs and samples. And that's where my appreciation for the album as a visual and artistic medium really flourished. I've bought so many albums by bands I'd never heard of just because of some crazy artwork or image on the cover. And when you get it home and play it and there's a good song, or you get really lucky and the whole album is good, that is such a win-win, such a great feeling of discovery. 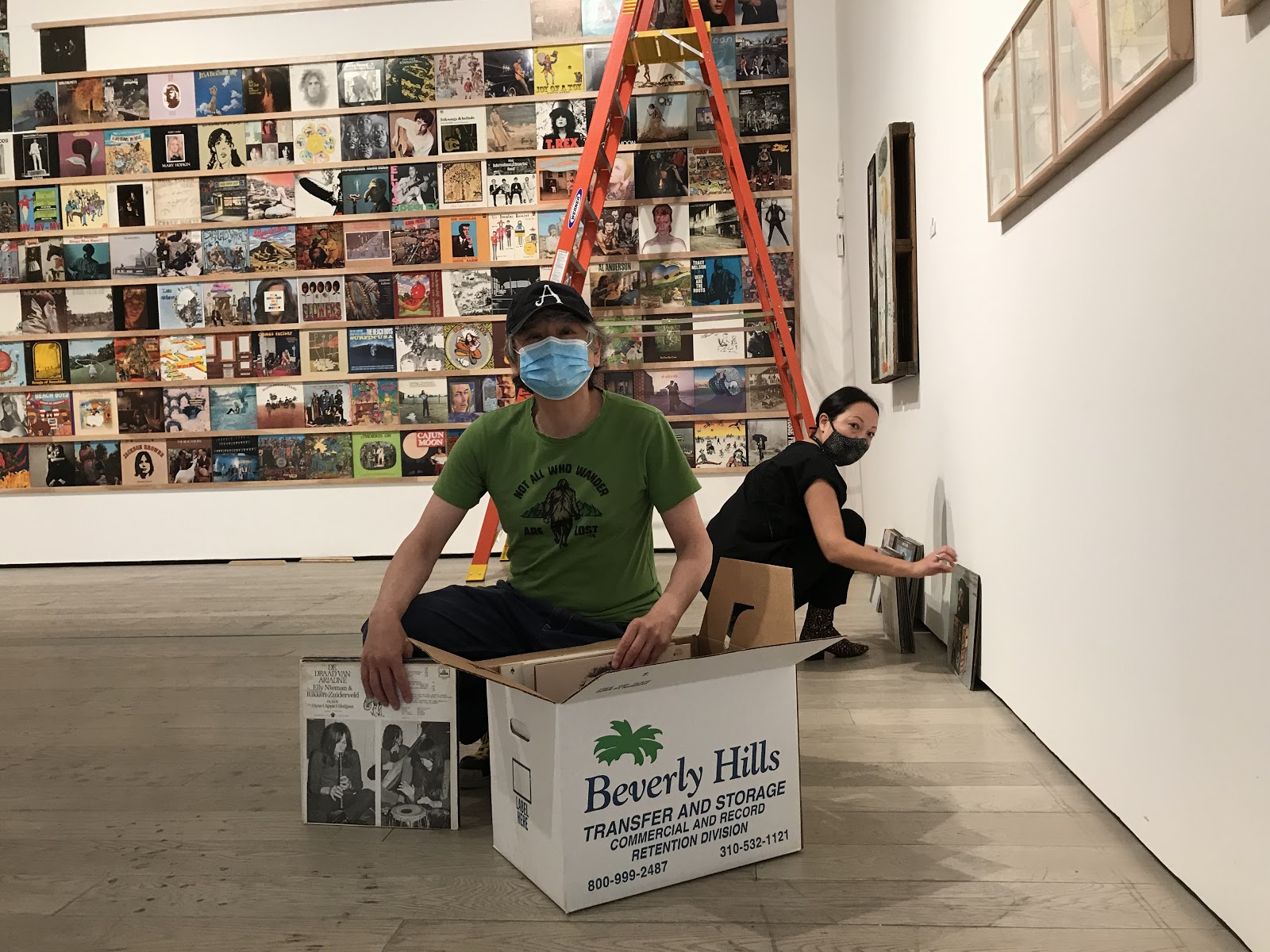 That's why it's so impressive to stand in front of these album covers from Yoshitomo Nara's personal collection, because I can feel a kinship and an understanding with the music fan who collected them. It's that familiar like-mindedness that you get when you connect with someone, and that connection transcends spoken language and reaches through to a deeper musical language that you both speak. Nara's English might be limited, and my Japanese is non-existent, but we both speak Aladdin Sane. Going through and looking at the albums in Nara's collection it's little wonder that these were some of the albums he listened to as he created his art. Maybe I'm biased because I have some of the same albums, but honestly they're classic albums that should be in everyone's collection. Music legends and iconic albums by The Beatles, Cream, Janis Joplin, and David Bowie that are all must-haves. At first, I didn't really see the relation between Nara's artwork and his album collection. Not that there has to be a direct correlation between the two, but sometimes one thing leads to another. But when I looked closer at his art, and listened to the music in his collection, it all began to make sense. It became so clear.

Oftentimes as an art preparator, when you're working on an installation of a show, sometimes you don't have a chance to look at the work or really see it, because you're usually working on a deadline of an opening date. You just have to get the art on the walls. But once the installation was finished, and I got a chance to really look at Nara's work, I saw what I had missed. Nara's drawings are filled with rockers and rollers, figures thrashing away on guitars, banging away on drums, and shaking tambourines. The inspiration and influence of the music is everywhere. Some drawings have quotes from Green Day and Iggy and the Stooges. Some drawings have figures wearing Social D (Distortion) across their t-shirts, while other drawings have a figure posing in front of stacks of Marshall Amps. The Ramones are everywhere. Drawings with their signature quick "1,2,3,4!" count off and "Hey, ho, let's go!" are framed around figures thrashing with guitars in Ramones haircuts. In other drawings he's adorned them with the phrases "Blitzkrieg Bop" and one says simply "Thank you for Ramones." He made the cover art for the tribute album for the band the Bloodthirsty Butchers, a Japanese punk band. Nara's drawings are all equal parts angst and attitude, the Id to his paintings' Ego. You can definitely see (and hear) the influence of punk as well as the glam rock and power pop of bands like The Yardbirds, Badfinger, T.Rex, and The Ventures when you look at these drawings.

There's an interesting juxtaposition between Nara's drawings and his paintings. As much as Nara's drawings have the backdrop of rock and rebellion, Nara's paintings are, at least to me, much more tranquil and serene. Even though his earlier paintings still have an edge and certain uneasiness about them, the later paintings have a much more quiet energy. Maybe it's because of the imagery or subject matter, but there's an implied innocence to them that just barely covers their strength and power. They definitely tap into a different kind of vibe. For the most part, the punk energy and mania is gone, or at least softened. The anger and attitude that lie just below the surface of Nara's earlier paintings are replaced with a kind of solace in the later paintings. I can hear Nico's cover of "The End" by the Doors, the instrumental work of Moondog, and the soft crooning of Nick Drake playing in the background as he's painting. I look at these works and can hear the influence of music by The Byrds, Joni Mitchell, Buffalo Springfield, and Shirley Collins.

It's amazing to me the influence that music has on all of our lives. Everyone has a favorite song, or that one song that immediately can spark a memory, or a feeling...both good and bad, and can take you instantly back to that moment in time. That's the universal appeal of it. You can tell a lot about a person by their music/record collection. For me, it's the barometer I use to gauge a person's personality, it's like a fingerprint, it can tell you everything you need to know about a person. Nara figuratively wears his music collection on his sleeve, and once you see its influence, you can't really unsee it. It permeates his artwork and I don't think you could have one without the other.

In the days before music was digital, when I was younger and went to house parties, the first thing I did before talking to people, or getting a drink was to check out the music collection. It was a long running joke with me and my friends. If the music was bad, nine times out of 10 the party was bad. The music tells the tale. I'll give another example. After we had finished installing the album covers, and stood there for a minute just looking at all the records, I asked Nara if he had a favorite album. "Everything," he said with a grin. When he asked me the same question, I responded, "I'm a big fan of David Bowie." He grinned again and nodded, "Glam Rock." Then I added, "And I do like Television." "Television...oh, you're from the East Coast?" he asked. "Yeah...how could you tell?" I asked as we both started laughing.

The music tells the tale. 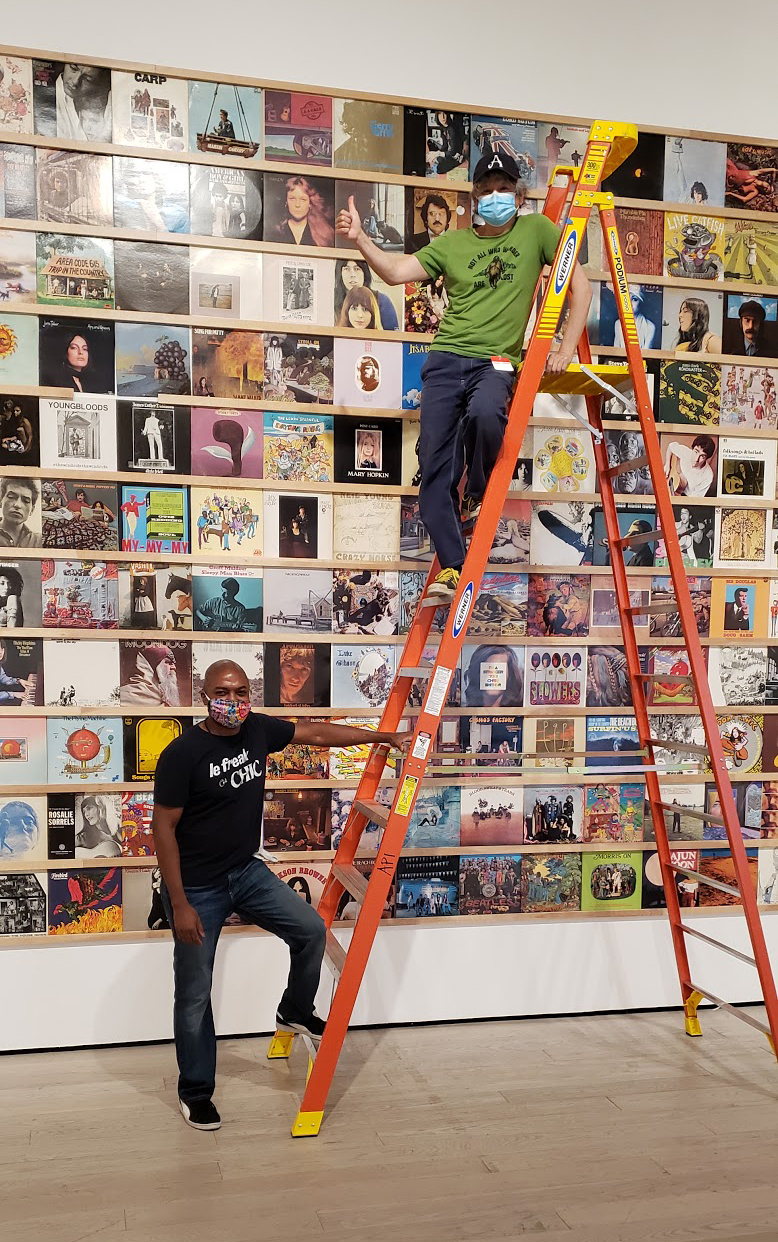 Michael Price with Yoshitomo Nara in front of the finished installation, photo by Daniel Wheeler

Please join us on October 11 at 5 pm PDT for a virtual tour of Yoshitomo Nara's exhibition followed by a conversation with the artist and exhibition curator Mika Yoshitake.