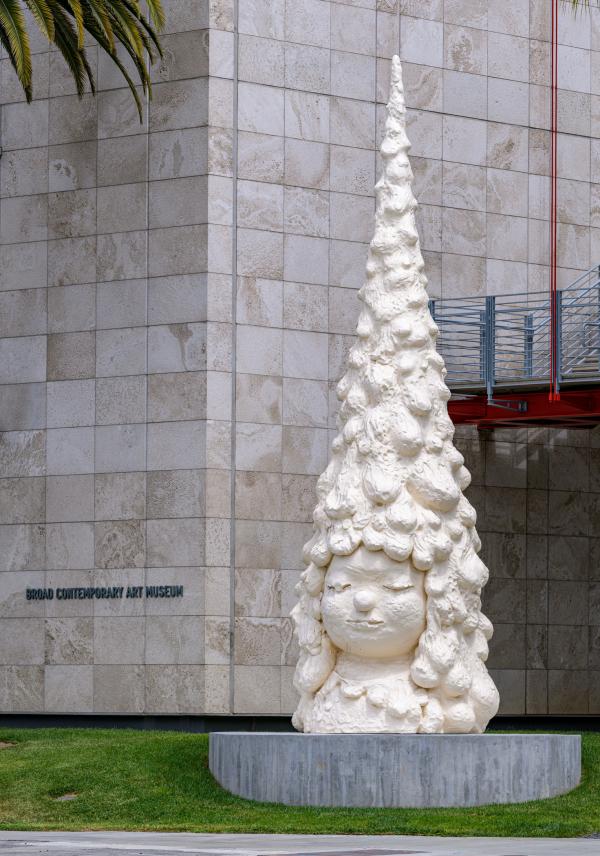 In August, LACMA's Art Preparation and Installation (API) team gave a behind-the-scenes look at the installation of Yoshitomo Nara's Miss Forest, a 25 foot 7 inch tall, 4,446 pound bronze sculpture that elegantly stands next to Chris Burden's Urban Light. Today, we're excited to announce that this monumental work is now in LACMA's permanent collection, thanks to the generosity of an anonymous donor. Miss Forest joins the museum's current outdoor sculpture program, including Michael Heizer's Levitated Mass and Chris Burden's Urban Light, all of which are currently accessible during the museum's temporary closure.

Miss Forest (LACMA Version) (2020), is Nara's largest outdoor sculpture to date and the newest iteration in this series. Created for LACMA's exhibition Yoshitomo Nara, the sculpture is currently installed at the southeast corner of BCAM along Wilshire Boulevard. In a recent interview with exhibition curator Mika Yoshitake, Nara describes the genesis of "Miss Forest":

"In Japanese, it's called 'Moriko' or the child of the forest. Ever since I began to produce works in clay, ... in the beginning, I was making large lumps, but then began to produce works that took the form of plants like a tannenbaum. 'Miss Forest' is the final version of that series. Amidst the process of the work being made, the image I envisioned was a thing that was connected to the earth, born from the soil of the earth, that grew into the sky... into outer space and thus communicated with the universe like an antenna. It is like a catalyst between the grand earth upon which we place our feet and the sky that our hands cannot reach. Instead of simply being an artwork, the work has that kind of presence. I think of Indigenous people who climb to high places in order to communicate with the sky and recite prayers. There is something similar to this that I feel exists inside of me. And I think that is why that piece was born."

Deeply affected by the aftermath of the Great East Japan Earthquake and Tsunami and the resulting Fukushima Daiichi nuclear disaster in 2011—which occurred only 43 miles north of Nara's studio—the artist found catharsis and creative inspiration in the mental and physical processes of hand-molding clay, some of which he began transforming into bronze. Among his output of bronze sculptures was Miss Tannen (2012), a big-headed girl whose hair rises into the conical point of an evergreen tree. This character became the model for Nara's series of "Miss Forest" bronze sculptures beginning in 2016. Appearing like a sleeping forest spirit, "Miss Forest" evokes the Shinto tradition of Nara's family lineage and upbringing in the Hirosaki community. Each version of "Miss Forest" is uniquely imbued with the touch of Nara's hand; her clumped and leafy hair, her button nose, and her closed eyelids are all impressed with organic, hand-molded markings. She is both contemplative and transcendent.

Miss Forest (LACMA Version) is the third work by Yoshitomo Nara to enter the permanent collection. The outdoor sculpture joins Black Dog (1999), a sculpture gifted in 2005 by Eileen and Peter Norton in honor of the museum's 40th anniversary, and Girl from North Country (2017), a painting purchased with funds provided by Sally and Ralph Tawil.