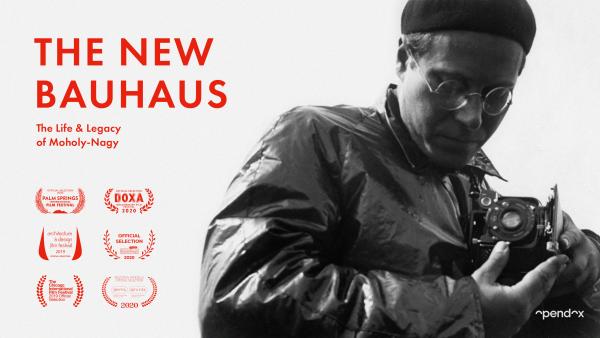 This Friday, December 4, LACMA is screening The New Bauhaus, a recent documentary about the life of pioneering artist and educator László Moholy-Nagy. The program also includes a post-screening conversation with director Alysa Nahmias. Moholy (as he is often called) was a prolific artist—working across media—and educator, always with the goal of integrating art, technology, and education for the betterment of humanity.

In 1923, Hungarian-born Moholy began teaching at the Bauhaus—the avant-garde school, founded by Walter Gropius in Weimar, Germany—which sought to integrate the fine and applied arts. Moholy's teaching colleagues included Anni and Josef Albers, Marianne Brandt, Wassily Kandinsky, Paul Klee, and Gunta Stölzl, among others. Students today typically learn of Moholy within the context of his teaching at this seminal school in Germany. 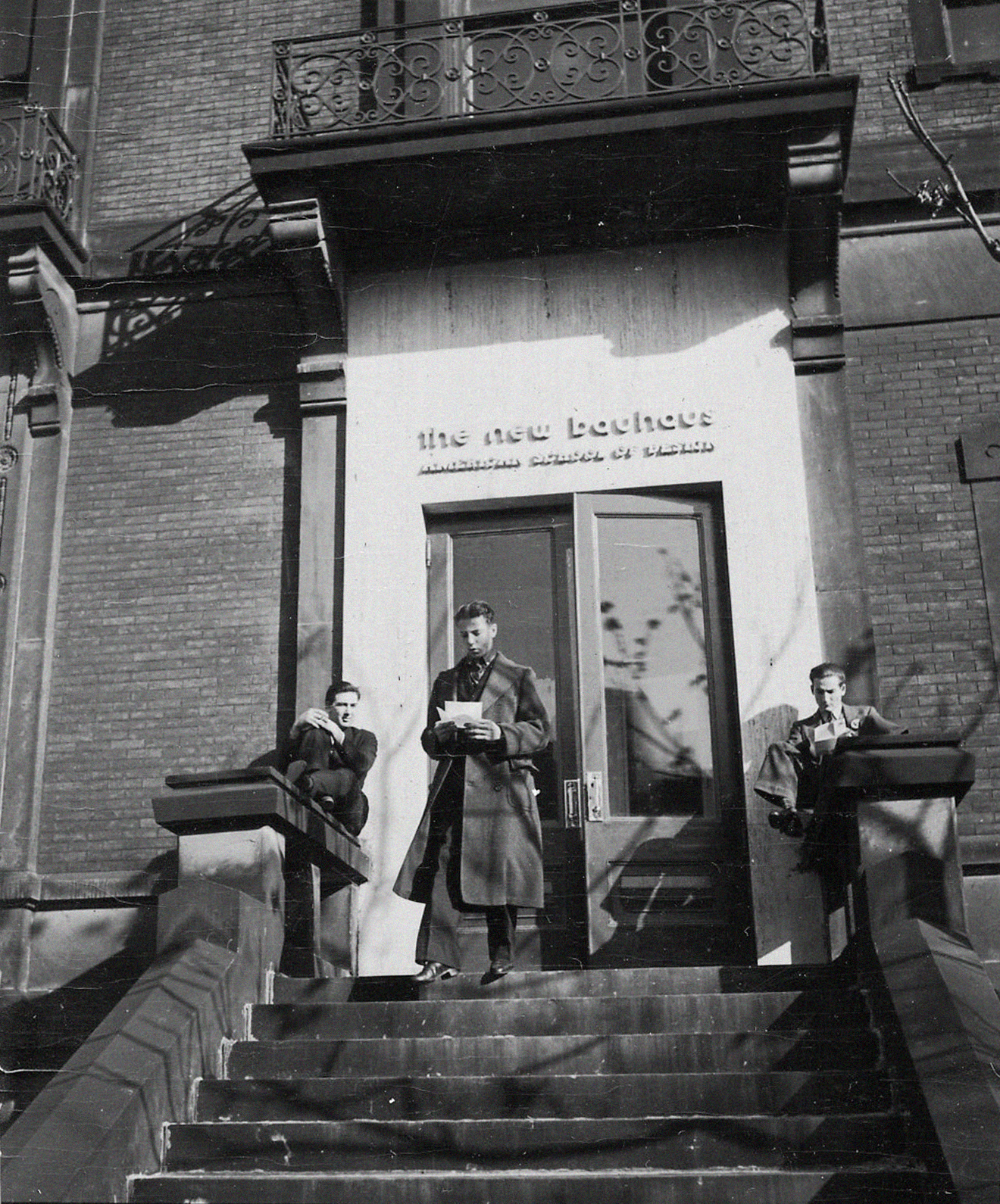 Exterior of The New Bauhaus School of Design in Chicago, 1938

The rise of the Nazis led Moholy to leave Germany for the Netherlands and then London. In 1937, Moholy accepted the invitation of the Chicago-based Association of Arts and Industries to begin a design school in the midwestern metropolis, which he called The New Bauhaus: American School of Design. Financial difficulties led to its closure the following year, but Moholy reopened it in 1939 as the School of Design; it was later named the Institute of Design and today is part of the Illinois Institute of Technology.

Visitors to LACMA's 2017 retrospective Moholy-Nagy: Future Present experienced galleries filled with the artist's paintings, photographs and photograms, drawings, collages, sculptures, and films, as well as graphic, exhibition, and stage designs. A series of openings that cut diagonally through the exhibition space (designed by the Los Angeles architecture firm Johnston Marklee) mirrored the strong compositional lines in many of his works, while also allowing visitors to experience his career chronologically, thematically, or along more personal routes.

In certain ways, the innovative structure of The New Bauhaus film operates in a similar fashion. Moholy's years in Chicago leading the school serve as a throughline in the film's story, as it moves among different aspects of his life and career organized by his interests in a multitude of materials and approaches. It looks back to his years in Europe before coming to Chicago, and then forward to the impact of his work and pedagogy on the students in Chicago and contemporary artists and designers. 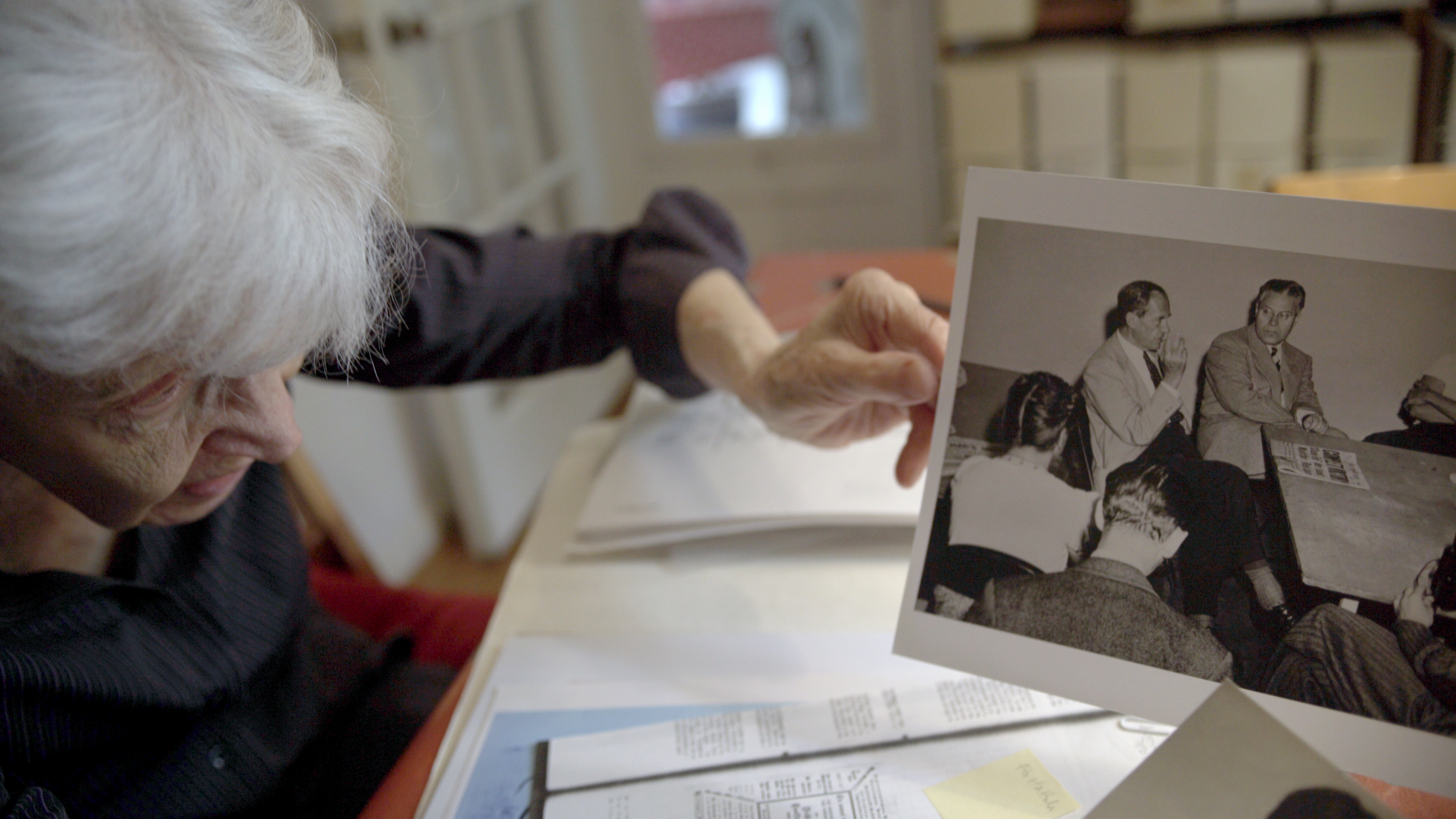 Hattula Moholy-Nagy with a photograph of her father and Walter Gropius, still from The New Bauhaus, courtesy of Opendox, director: Alysa Nahmias, photographer: Petter Ringbom

Throughout the film, Moholy's daughter Hattula Moholy-Nagy provides a nuanced and personal perspective on the life of this important figure. Hattula's viewpoint, interwoven among interviews with Moholy's students, highlights the impact Moholy made on future generations. The film balances these personal reflections with archival material as well as interviews with a rich array of current scholars, providing a fuller picture of this restless, prolific, and influential artist and educator. Hans Ulrich Obrist narrates the film, reading the words of Moholy on camera throughout.

Of local note, LACMA's Director of Artist Initiatives, Erin Wright, is one of the film's producers; and the film's director, Alysa Nahmias, first met Moholy's daughter Hattula at LACMA's opening reception for the retrospective. When viewing the artworks on display that evening, Hattula spoke of "seeing old friends"; new friends were made then as well.

Vertical Black, Red, Blue in LACMA's collection was created when Moholy lived in Chicago. Always interested in new technologies and industrial materials not traditionally considered for art, Moholy was particularly fascinated by Plexiglas. First produced in cast sheets in 1934, Plexiglas was marketed for industrial use such as for airplane windshields. Moholy would take these Plexiglas sheets, make incisions and paint on them, and at times heat them in his kitchen oven. Once malleable, he could shape them by hand. Vertical Black, Red, Blue provides an excellent example of Moholy's lifelong interests in light, design, painting, sculpture, and new technologies—all integral to his practice, from his early works in Hungary and Germany to his founding of America's most influential mid-century school of design, The New Bauhaus.

Whether Moholy is an "old friend" among the artists you admire or you'll be encountering Moholy's artwork and extraordinary legacy for the first time, we hope you will join us for this screening and conversation.