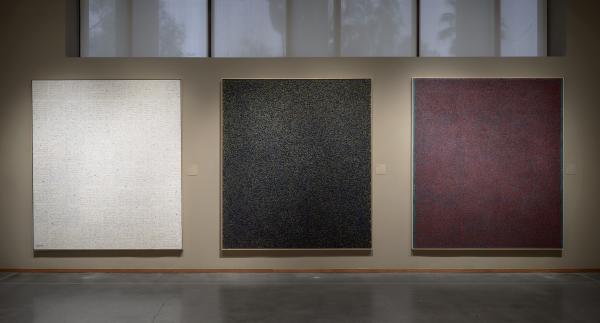 I imagine every curator has a first. The first living artist for whom they are privileged to put together a solo show. For us at LACMA, it was the first solo show to feature a Korean American artist, Unexpected Light: Works by Young Il Ahn (2017–18). Young Il was, to me, evidence of the handful of artists who chose to leave Korea for better materials and opportunities in the U.S. It was the 1950s, after the Korean War (1950–53), and it also confirmed it was nearly impossible to be a productive artist in a postwar devastated country. It was during this decade that Korean artists left for New York and Paris, and Young Il eventually made it to Los Angeles to be close to the ocean.

When I first met him, what struck me was how quiet he was when his works conveyed so much emotion. While acknowledged as a child prodigy, Young Il carried out his most prolific work in the States where he lived for over 50 years. His many series consistently reflect his local surroundings and his passions: "Birds," "Umbrella," "Musicians," "At the Beach," "California," and "Sunset." His early works were semi-abstract and filled with the music he loved. Few people know that he played the piano, clarinet, and cello and always had classical music playing when he painted, which was every day.

During a prolonged difficult period in his life, Young Il would take a small boat out to sea daily. One of those days, a thick fog enveloped him preventing him from seeing anything, even his hands. He thought this would be the last day of his life, but after several hours, the fog lifted revealing a bright spectrum of light that forever changed his view on life. His last and most recent painting series, "Water"—from which most of the works for the LACMA exhibition had been chosen—mark a complete shift in Young Il's style from semi-abstract to complete abstraction. The works became bright and colorful affirmations of an artist who was deeply confident and content in what he would do with the remainder of his life.

While the trio of paintings in the photo above don't come from Young Il's brightest palette, the painting with the deepest meaning in Young Il's life is the center black one. This painting was the first one he attempted after having a stroke. He wasn't sure he could do it due to the size and stamina it would take to paint it. If one views this painting and compares the texture/brush with the others, you can detect a shakiness and hesitancy in the overall texture. To me, the tremors in his use of the brush show his determination and his vulnerability in trying to prove to himself that the stroke was not going to get in his way. This is the way he lived his life.

Twice I had the opportunity to be alone with him. These were my favorite moments because he would talk to me. It would never be about how his show preparations were going or how many works I was thinking about showing, or how much pain he was in, no, it would be about humdrum things that were on his mind like lunch or his parakeet whom he loved.

As a child of immigrants myself, I would often think of how brave Young Il was to come to America alone without being fluent in English and when most people didn't know what Korea was, but being confident enough that this new country would recognize his artistic talent and make a living solely as an artist. He did it. In addition, he leaves us with six strong daughters. I call them the female Brady Bunch.

My heart sank a bit when I heard the news that he had passed peacefully in his sleep on Saturday, December 12, 2020. It's true that you feel it more when it is the first, but it does make me happy to know that physically, he is finally free. As Young Il himself used to put it, "To me, water is life and the universe, a cycle and eternity."