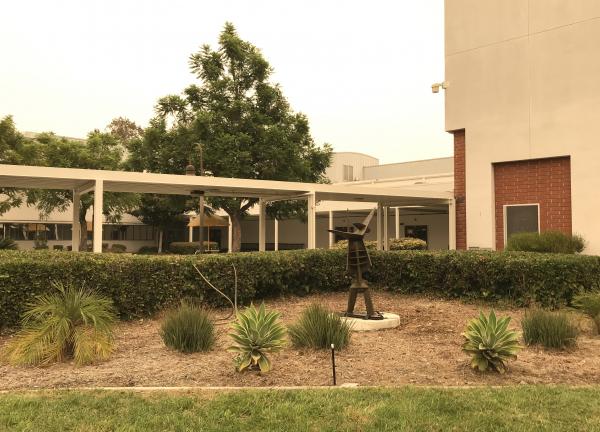 It had been six months since LACMA, along with the rest of the country, shut down all non-essential operations to keep staff and visitors safe from COVID-19. By September 10, 2020, when we gathered on the quiet grounds of California State University, Los Angeles, it had been the longest stretch in most of the team’s professional lives without installing art. Thanks to the perseverance, safety protocols, and the unwavering excitement of Dr. Linda Essig, Dean of the College of Arts and Letters at Cal State LA, and her dedicated group of engineers, facilities, and operations team members, we were able to end that unfortunate stretch of time away from art-in-real-life. This re-entry was particularly meaningful not just because we were able to replenish our souls with that intangible something that we, as art professionals, count on regularly—a connection to creation, reflection, beauty—but also because we were able to restart LACMA’s ongoing program to share art in public settings around L.A. County.

As part of LACMA’s commitment to engaging the varied communities beyond our campus at Wilshire Boulevard, over the past several years we have lent some of our large outdoor sculptures to sites across L.A. County where art is not traditionally displayed. As part of this initiative thus far, we have placed 13 sculptures on long-term loan, many of which have never been on view before. In a collaborative process involving the borrowing institution and our team at LACMA, each sculpture is carefully selected to match the unique settings of its final destination, in terms of scope, scale, and subject.

At Cal State LA, we drew on the university’s commitments to providing an excellent education and nurturing their students into strong community partners to choose artwork appropriate to the student population and to the public who use the open campus. For this jewel of the public university system, which is “dedicated to engagement, service, and the public good,” Cal State LA and LACMA together decided on three works of art that would reflect their goals: Martin Puryear’s Decoy from 1990, Bernard Zimmerman’s John Henry from 1957, and Mark Lere’s Tornado from 1985. 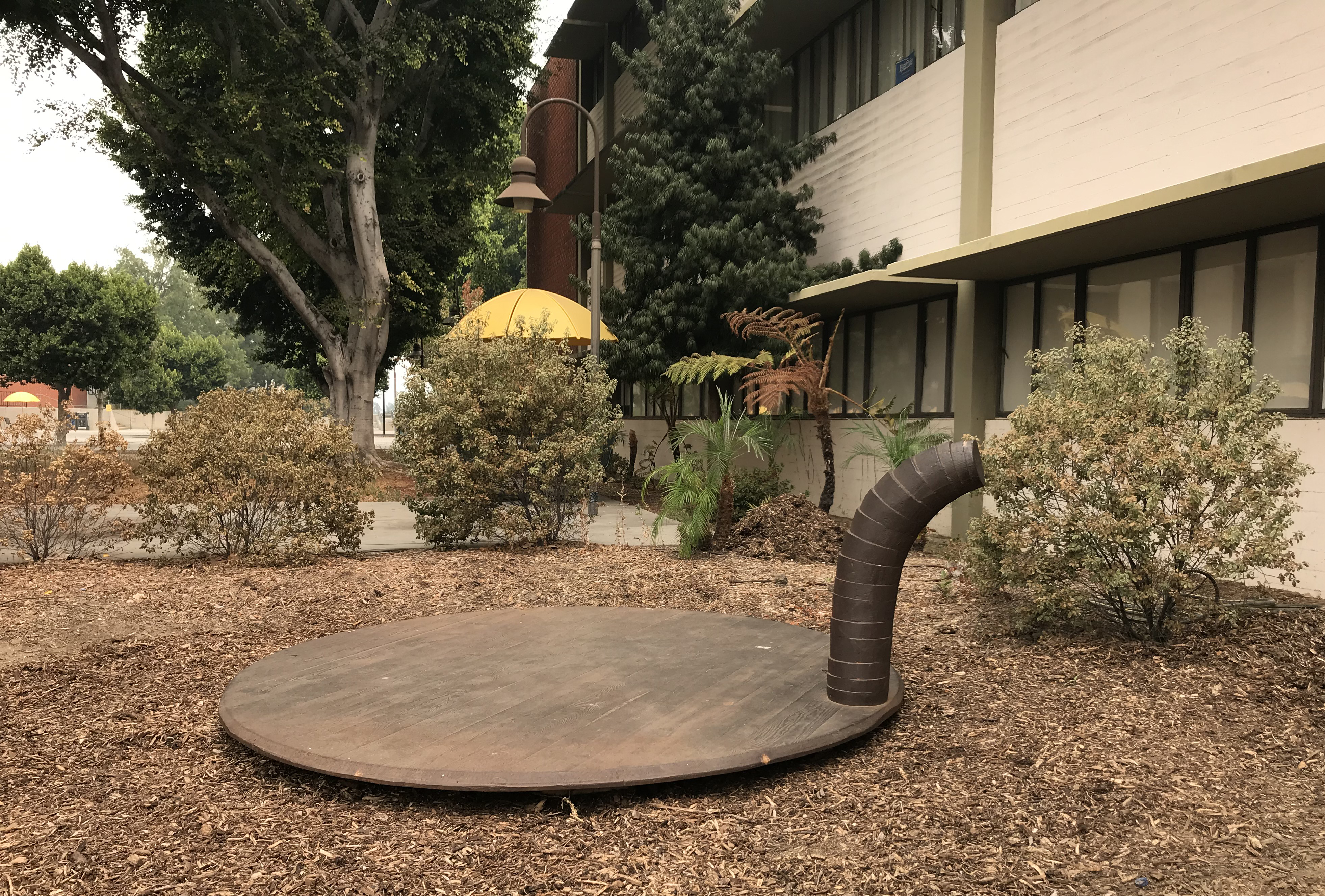 Martin Puryear is a celebrated contemporary artist deeply committed to exploring his craft. While he is often considered a minimalist, he maintains that the form and materials of his work inevitably tell a story. Race, identity, and ritual, in addition to biography, are often at the core of his work, and Decoy, is part of a series that explores stereotypes and the deceptive identities they conjure. Its graceful vertical form provides balance to the weighty circle on the ground, and Puryear’s reductive forms can be intensely evocative despite their elemental nature. The only other time this work left LACMA since its acquisition in 1991 was for an exhibition at the White House on contemporary American sculptors in 1995–96. 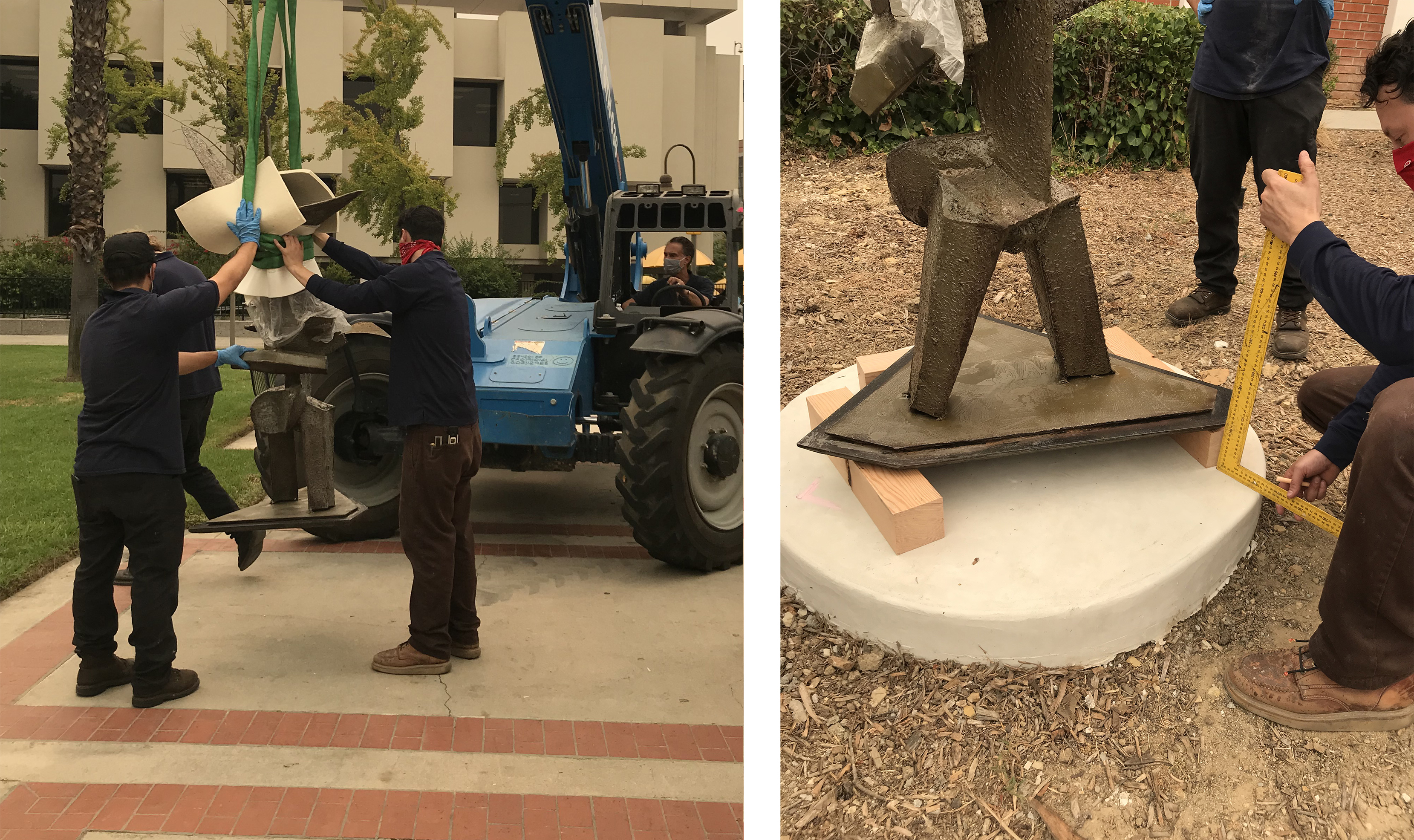 An artist and teacher in Southern California during the second half of the 20th century, Bernard Zimmerman began his formal education at the Otis Art Institute before becoming an art teacher. During that time he exhibited widely in the region, and made several significant public architectural commissions in and around Los Angeles during the late 1950s into the 1960s. His large-scale sculpture was made of welded metal and cast bronze, and Zimmerman was dedicated to using reductive geometric forms to sculpt. This abstracted interpretation of the African American folk hero John Henry, who was appropriated by the labor movements of the 1950s and 60s as well as the Civil Rights movement, is a pronouncement of Zimmerman’s political and artistic interests. John Henry stands as a progressive emblem amid political turmoil and social unrest. In both subject and style, Zimmerman’s sculpture represents the artistic and curatorial voices working in less traditional modes that battled against deeply conservative local government in the post-war period. 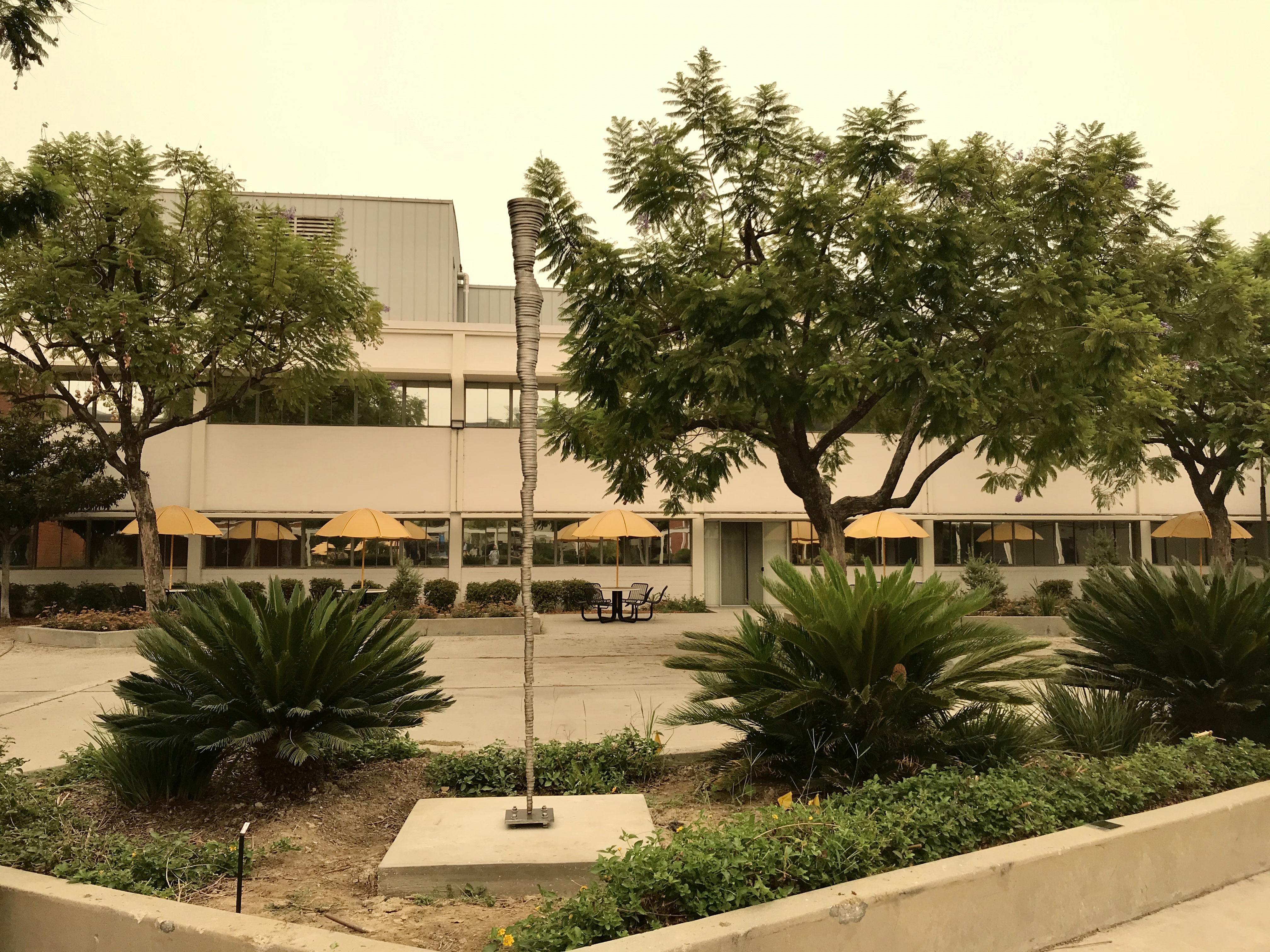 Mark Lere is an L.A.-based artist who has for years harnessed the possibilities of abstract forms in service of exploring a strong interest in the natural world. During the 1980s, drawn from his experience growing up in North Dakota, he focused more firmly on environmental phenomena, including the forces of water and wind. He has used a variety of materials, some water based (plaster, concrete), and some forged (bronze, steel), as in his “Vortices,” of which Tornado is one example. A single columnar totem made of steel discs stacked over eight feet high, the hardened, smooth material is a deliberate contrast with the unpredictability of nature. Lere’s emphasis on his sculpture’s relationship to space is a trademark of his work.

Together we hope these three works of art provide respite in a stressful time, as they did for our teams, whose spirits were reinvigorated by our proximity to art after several months in quarantine. More importantly, as we look forward, we hope the sculptures allow for a moment of reflection or inspiration, or better yet, provide a space to gather together, when students are back buzzing around, heads down, running from class to class, after life returns to normal.