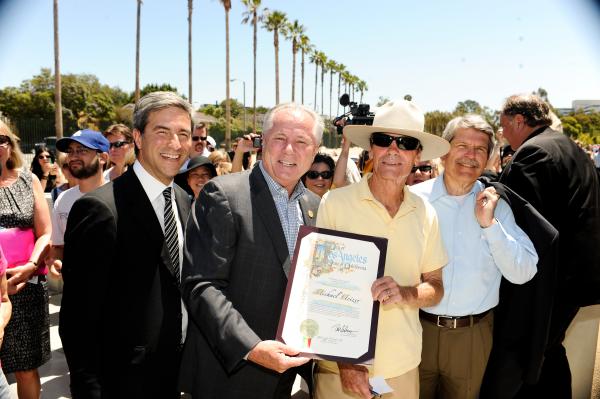 Former Los Angeles city councilmember Tom LaBonge passed away last week. Until 2015, LaBonge represented District 4, in which LACMA sits. As a longtime supporter of arts and culture in Los Angeles, LaBonge was known for his love of LACMA, and was often spotted at the museum.

LaBonge was a great advocate for the arts. In 2014, LaBonge’s office and the Los Angeles Department of Cultural Affairs coordinated, with Sister Cities of Los Angeles and the French Consulate, a year-long cultural exchange between L.A. and Bordeaux, France, celebrating the 50-year anniversary between the two cities. This initiative included the presentation of Delacroix’s Greece on the Ruins of Missolonghi (November 2014–February 2015) at LACMA. The museum’s Road Trip: Photography of the American West from the Los Angeles County Museum of Art traveled to the Musée des Beaux-Arts de Bordeaux (August–November, 2014).

"I looked forward to every one of Tom's visits to LACMA, which were always full of his indefatigable enthusiasm and sense of life—and his love of Los Angeles, and art," said Michael Govan, LACMA CEO and Wallis Annenberg Director. "As a photographer himself he had a keen eye for the exciting visual texture of L.A. From the moment it was installed, Tom was among the first to declare Chris Burden's Urban Light sculpture as an icon of Los Angeles. So many of us were encouraged by Tom to keep making L.A. a better place for everyone."

LACMA joins many other Angelenos in mourning the loss of LaBonge.