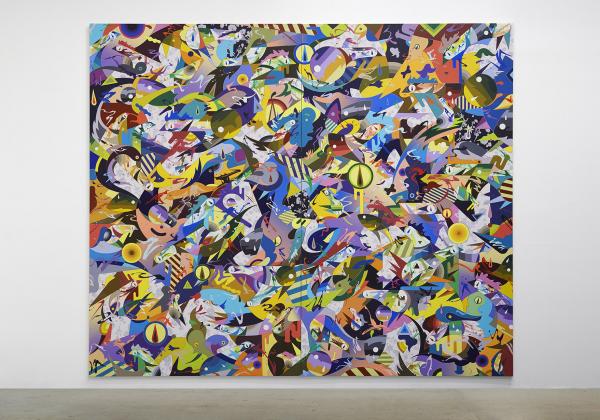 I am thrilled to write this blog on the occasion of LACMA's acquisition of a painting by Matsuyama Tomokazu (Japan, active United States, born 1976)*. The abstract, acrylic on canvas diptych is titled You Need to Come Closer. I was captivated (literally, I couldn't move) by this painting during a visit to Matsu's Brooklyn studio two years ago, fascinated by the multivalent elements on the canvas as they swirled and collided.

The deeper subject of the painting derives from the traditional Japanese theme of "1,000 Cranes," seen in painting, textiles, lacquer, and in folded origami paper as a wish for long life. The crane—believed traditionally to live for 1,000 years and mate for life—Matsu transforms into geometricized birds, complete or fragmented, that rip across the canvas' shallow space. The effect this has on me, as a viewer, is that of entering an enormous rush hour crowd where faces noticed briefly seem to blend into a generalized mass. The dynamism and speed evident in these darting shapes reach a point of near madness with eyes popping out from the background one-by-one, to stare directly at a viewer.

Matsu spent his early childhood in Japan, but his adolescent years in Orange County, California. Returning to Japan after junior high, he was treated like a foreigner. After completing his degree in Business at Sophia University, Matsu returned to the U.S., taking up permanent residence in Brooklyn, New York, where again he is treated like a foreigner. While suffering from a feeling of being an outsider with no home, Matsu's distance from Japan has allowed him to look more objectively at both Japanese art and American culture specifically, and East Asian art history in general, from which he draws much of his imagery.

One recognizes immediately in You Need to Come Closer a preference for simplifying objects into flat patterns, and arranging elements into shallow layers, with evenly saturated hues trapping the imagery at or near the picture's surface. In general, this typifies the Japanese historical manipulation of motifs and styles imported and adapted from those of mainland Asia, attuning them to Japanese tastes. The proclivity for flatness, born of Matsu's interest in graphic design, carries also into his large-scale sculpture and figurative painting. Repeated motifs in this painting evoke leitmotifs utilized in poster designs by one of the mid-century graphic designers Matsu admires, Awazu Kiyoshi (whose work is also in LACMA's collection). Awazu's areas of open space disappear in Matsu's painting replaced by horror vacui—fear of open space—as Matsu inserts only patches of black to relieve the mass of roiling forms that project the idea of "1,000 Cranes." Though bearing this felicitous subject matter, there is a dual nature to the painting that in ways recalls Alfred Hitchcock's The Birds.

Dualism is at the center of Matsu's practice. He is a product of two countries and two cultures, with sources of his imagery coming from contemporary Western pop culture as well as highly sophisticated historical East Asian art. This blend bespeaks his unique global viewpoint. Even Matsu's abstract work, such as You Need to Come Closer, merges figuration with geometry in an ambiguous manner causing the viewer to search for the birds as if in a "Where's Waldo" puzzle. In the construction of the painting, Matsu painted the precise shapes of abstracted birds in exactingly selected colors that required months of concentrated work, followed by Matsu dribbling paint across the surface. This latter action adds dynamic movement and simultaneously counters the underlying perfection of technique that in itself evinces Japan's culture of craft.

The two panels that comprise this painting are large, together measuring 120 x 100 inches, and so the impression is that of enveloping intensity, though as one studies the surface, delicate details appear. By contrast, Matsu's more broadly painted abstract mural, titled Thousand Regards/Shape of Color, is on display at 170 N. Canon Drive in Beverly Hills on a temporary construction wall for the metro line. The mural is viewable from one's vehicle for up to two miles north on Canon Drive looking south, having a scale of about 20 x 80 feet. Matsu simplifies the shapes in this monumental mural so that it is readable from either a great distance or close up. He selected colors to resonate in the persistent sunshine of southern California, and incorporated palm trees beyond the mural into its greater composition as a "borrowed view," a practice adapted from classic Japanese garden design.

In 2020, Matsu created two highly lauded outdoor projects in Tokyo—one at Shinjuku Station (the world's busiest train station) and one at Meiji Shrine (a hallowed place of sudden quietude in the midst of the Tokyo metropolis)—as well as a large scale solo exhibition in Shanghai at the Long Museum. In 2021 (we hope), Matsu will complete an environmental project at Culver City's Ivy Station, once COVID-19 restrictions loosen. For this project, steel and painted structures will come alive with deeply incised carvings of flowers drawn from a late 19th century Japanese compendium of printed botanical motifs. Graceful lines carved into stiff, reflective metal will carry Matsu's dualistic aesthetic into a visually charged environment encountered daily by train commuters, residents, and business clients in the new station. Unlike his two-dimensional pieces, his work in these contexts evokes an equally strong impression when approached from multiple directions and viewpoints.

With Matsu's career taking off like a rocket in Asia and across the world, we are extremely fortunate to have three of his diverse works of art in Los Angeles to enjoy in the coming years.