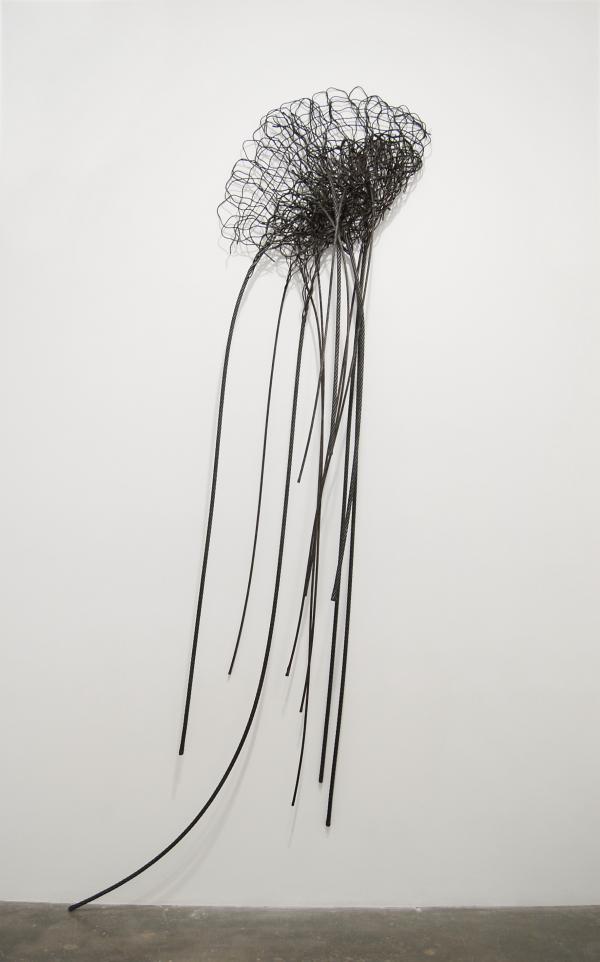 In honor of Black History Month, we are highlighting works by Black and African American artists across various departments of LACMA's permanent collection to celebrate their lives, their legacies, and their often overlooked impact on art history. Today's focus is on works in the Modern Art department.

Long before the term "intersectional" was coined in 1989, Maren Hassinger's work simultaneously addressed issues of feminism, environmentalism, and racism. "I'm always interested by what is around me. Not only visually, but the intellectual part, the emotional part," she has explained. Untitled (Sea Anemone), made of twisted and intertwined wire rope that suggests organic forms, is one of her signature floor- and wall-bound sculptures. Hassinger relates the twisted wire to the umbilical cord, something shared by all mammals. Untitled also suggests the delicate beauty of the sea anemone and alludes to both its predatory nature and its precarious existence in coastal tropical waters now threatened by ocean warming and chemical runoff. Born and educated in Los Angeles, Hassinger was the first Black artist to have a solo exhibition at LACMA, in 1981, but it would be almost 40 years before a work by her entered the collection.

In the wake of the 1992 civil unrest in Los Angeles after the acquittal of the police officers accused of beating Rodney King, Joe Ray (who has lived here since 1963) created a body of work, including US, concerned with equality and inclusion. The title refers both to the United States and "us," with the purposefully vague pronoun functioning inclusively but also suggesting the divisive notion of "us" vs. "them."

With its symbols of freedom and equality alongside those of repression and protest, US points to the oppositional realities of Black people in America. The gazelle head symbolizes the African continent, while Ray describes the flower below as an urban plant that manages to grow in concrete. The spade outlined in the center evokes a racial slur, card games, leaves, and a tool for digging and planting. The traditionally blue field of the American flag is made here of kente cloth, a textile with origins in Ghana and significance to the West African diaspora. The splashes of black paint reference Abstract Expressionism—considered the cultural moment when the U.S. began to dominate the international art world—as well as stained urban sidewalks and paint thrown in protests. 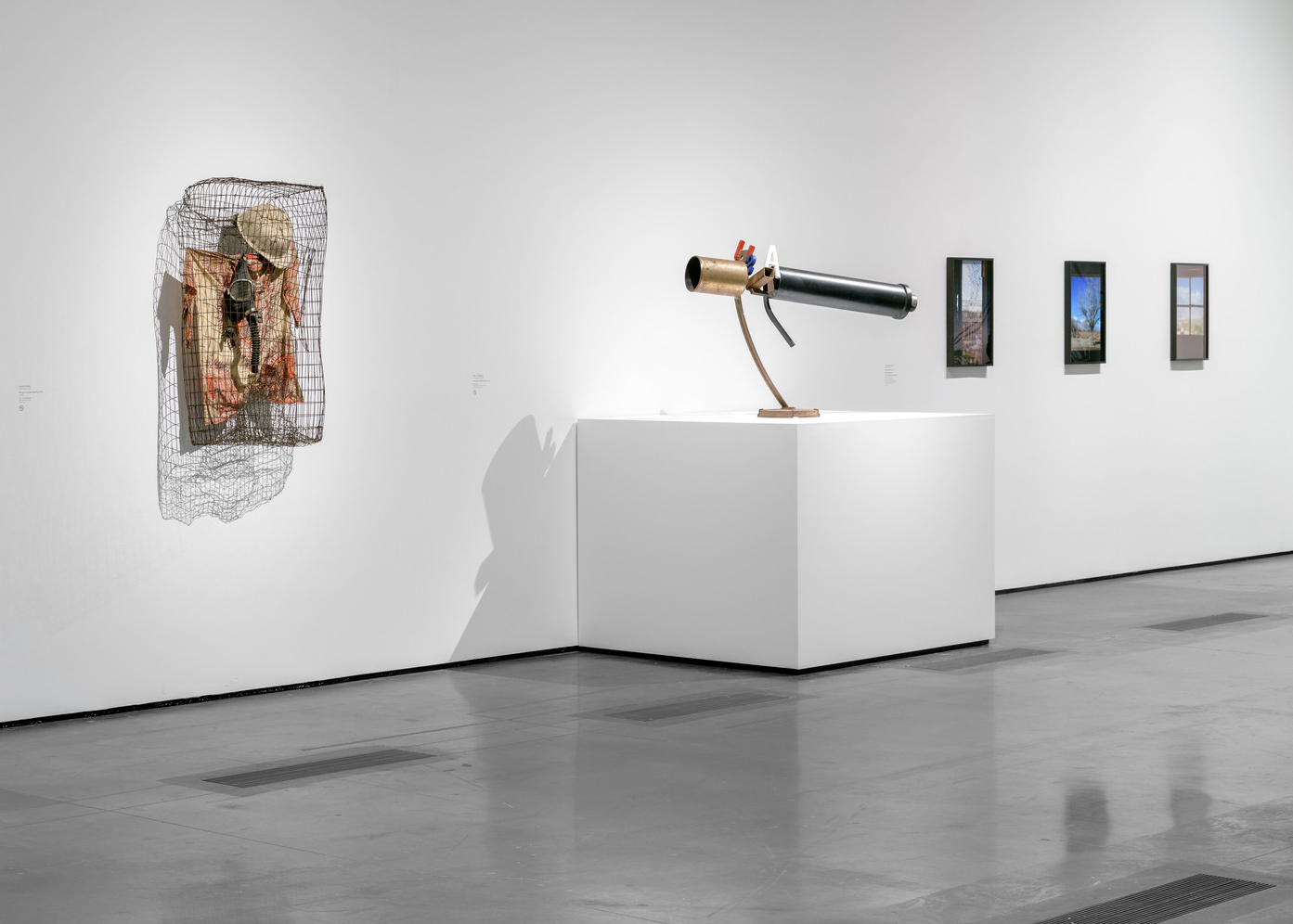 Los Angeles–born John T. Riddle, Jr., who was both an artist and a teacher, believed that art must "advance social consciousness and promote Black development." He was deeply affected by the destruction resulting from the 1965 Watts Rebellion and turned to welding sculptural assemblages from the torched debris, creating works with a social message that evoked rage and possibility simultaneously. America's Problem Solver, made some five years later, at the height of the Vietnam War, evokes both a weapon and a telescope. It suggests not only that the United States had other countries and cultures in its sights, but also that this country itself was under scrutiny. As a serviceman in the 1950s who had felt the sting of institutional military racism, Riddle was certainly aware that Black soldiers were being disproportionately killed in Vietnam. His sculpture thus implies a need to look both afar and within to solve our national problems, which holds as true today as in the 1970s. America's Problem Solver was first exhibited at Brockman Gallery in Los Angeles; founded in 1967 by artist-brothers Dale and Alonzo Davis, the gallery offered a platform for Black artists to show their work. 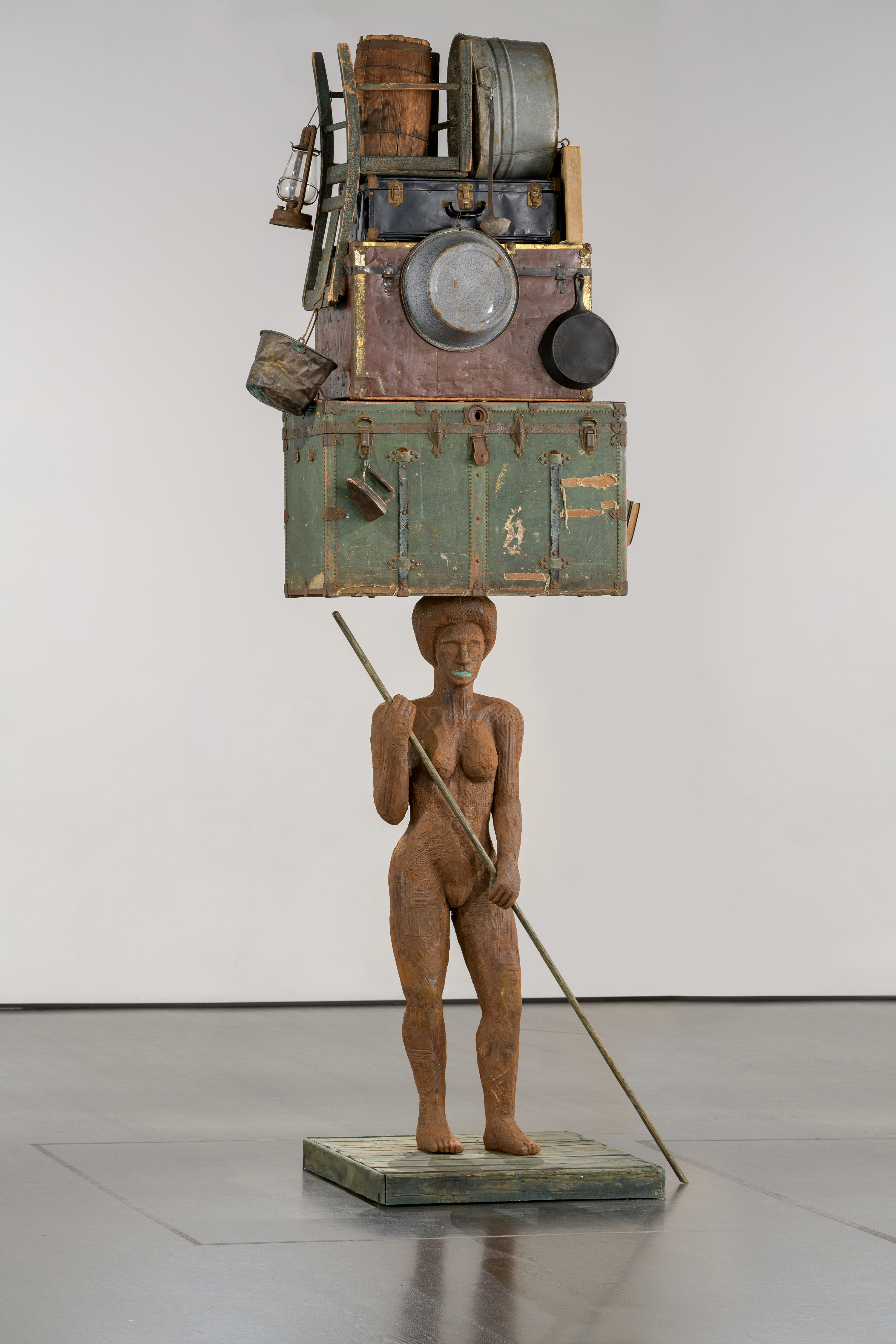 Alison Saar consistently addresses issues of race in her work, at the same time paying homage to art and artists of the past. Born in Los Angeles, the middle of three daughters of pioneering African American assemblage artist Betye Saar and art conservator Richard Saar, Alison Saar grew up in a household filled with creative energy and a broad range of art objects—all of which fueled her desire to create work reflecting the diversity of her own experiences. Saar's Breach is informed by the Great Mississippi River Flood of 1927, an epic inundation that affected more than 630,000 people, one third of whom were African Americans. Like Hurricane Katrina nearly 80 years later, the 1927 flood foregrounded socioeconomic and other inequities between Black and white communities. Saar's oversized female figure speaks to the limits of human endurance; it refers to women the artist saw in Senegal balancing gravity-defying loads on their heads. Saar's protagonist can also be likened to ancient Greek caryatids and evokes the intensity of both African and German Expressionist carved wood sculptures.