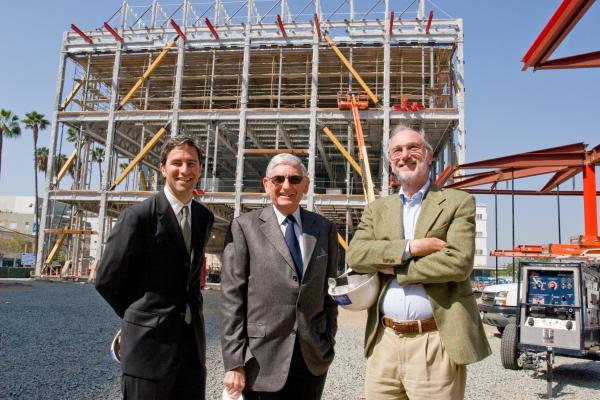 We are saddened to note the passing of longstanding LACMA life trustee Eli Broad on Friday, April 30, 2021. Known for his successful business career as well as his commitment to philanthropy, Mr. Broad, along with his wife Edythe, are known to us especially for their passion for contemporary art and making Los Angeles a contemporary art capital.

In Los Angeles, their adopted home since 1963, Mr. and Mrs. Broad began collecting art with a focus on contemporary works, and their collection soon grew to become one of the most prominent and important holdings of postwar and contemporary art in the world. The Eli and Edythe L. Broad Collection and The Broad Art Foundation serve as a lending library of works to museums and institutions globally. The Broads’ passion for art and artists led to their decades-long support of arts institutions and cultural infrastructure in Los Angeles and beyond.

Having played an active role at LACMA since 1973 and serving as a trustee since 1995, Mr. Broad was an involved and generous benefactor to the museum. During Mr. Broad’s tenure on the board of trustees, he and his wife donated nearly $70 million to support LACMA, including the lead gift to the Transformation Campaign, which revitalized the museum and expanded the campus. In 2008, the Broad Contemporary Art Museum (BCAM) opened to the public. Today, BCAM houses some of our most ambitious modern and contemporary art exhibitions and crowd-favorite artworks, including Chris Burden’s Metropolis II, Robert Irwin’s Miracle Mile, Barbara Kruger’s Untitled (Shafted), and Richard Serra’s Band (a gift from the Broads).

“I believe in public institutions,” Mr. Broad said in 2008, speaking about his support of LACMA. “My joy—not only with BCAM, but the entire new LACMA—would be to educate a very broad public here in Los Angeles, and make it a place where people are comfortable.”

Over the decades, Mr. and Mrs. Broad gifted or funded 19 works by 18 artists, as well as numerous important works of art, to LACMA. Mr. Broad was a driving force behind the founding of the Museum of Contemporary Art (MOCA), the launching of the new LACMA, and the creation of The Broad.

“No one spent more time and energy promoting L.A. as an art capital than Eli,” said LACMA CEO and Wallis Annenberg Director Michael Govan. “His impact on L.A. will be felt far into the future. Though he will be dearly missed, his legacy lives on in so many places including BCAM at LACMA, continuing the Broads’ vision of making great works of art accessible to the public.”