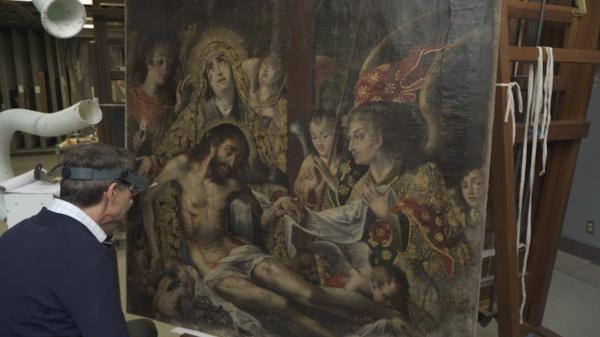 LACMA’s exhibition Archive of the World: Art and Imagination in Spanish America, 1500–1800 features over 90 works from the museum’s notable collection of Spanish colonial art in a range of media—paintings, sculptures, textiles, and decorative arts. The exhibition emphasizes the complex dynamics that led to the creation of these stunning artworks, underscoring the generative power of Spanish America and its central position as a global crossroads.

Among the exhibition’s highlights are several new acquisitions on view for the first time, including the monumental Pietà (c. 1720) by the painter Melchor Pérez Holguín, which was recently restored. Referred to as the “Golden Brush,” Pérez Holguín was regarded as one of the most important painters in Potosí, Bolivia, (then part of the viceroyalty of Peru) in his own day and beyond. This stirring painting was designed to invoke piety and arouse the senses, all while appealing to local forms of taste and religiosity.

Learn more about the artist, the painting, and its restoration in the video below. Narrated by the actor Julian Sands, the video also includes rich commentary by various experts, including LACMA curators and conservators, as well as prominent historians.

Archive of the World: Art and Imagination in Spanish America, 1500–1800 is on view through October 30 in the Resnick Pavilion.