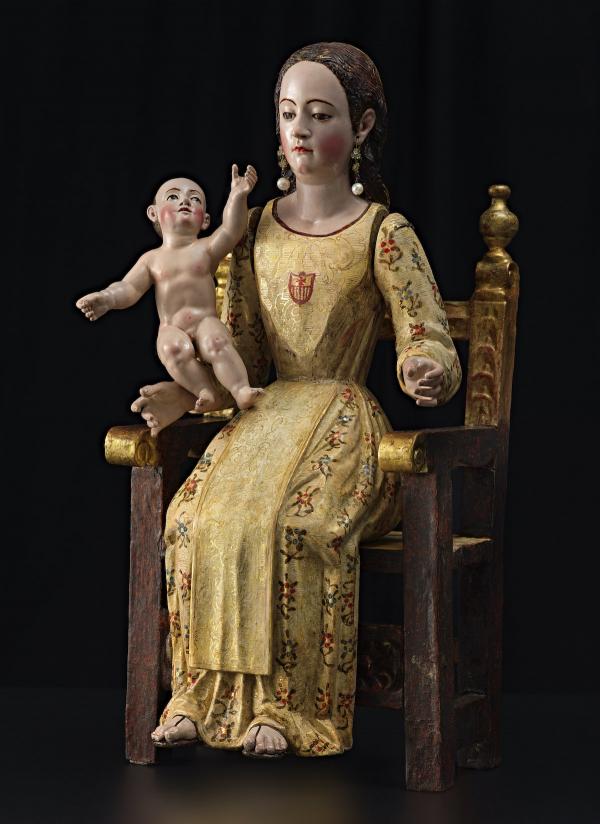 A Rare Sculpture of “The Pilgrim of Quito”

Debuting in our current exhibition Archive of the World: Art and Imagination in Spanish America, 1500–1800 are several recent acquisitions, including a very special 18th-century polychromed sculpture from Ecuador. The small image represents the Virgin of Mercy, or “Pilgrim of Quito,” a miracle-working sculpture venerated in that city.

The tradition of polychrome sculpture originated in Europe (the region of Andalusia in Spain was a main production center), but some of the finest practitioners were in Quito (the seat of the Audiencia de Quito, in the viceroyalty of Peru). Although the names of a few sculptors have been documented—most notably Bernardo Legarda (c. 1700–1773) and Manuel Chilí (more widely known as Caspicara, c. 1723–1796)—most artists remain unidentified. The profession was largely dominated by Indigenous and mestizo artists within the framework of family-run workshops and involved the participation of different artists—carvers, polychromers, and silversmiths.

By the 18th century, Quito sculpture had developed a highly distinctive and largely self-referential style. Artists produced hundreds of images of different saints and advocations. The works are typically distinguished by the figures’ smooth and youthful features, rosy cheeks, lifelike eyes made of glass, pursed red lips, and plump, shiny flesh (encarnaciones). Decorated with exuberant estofados (pictorial emulations of fine fabrics), most works served a predominantly private devotional purpose in homes and convents.

One of the factors that contributed to an identifiable Quito style was the employment of lead masks (mascarillas de plomo) for the face—a method that enabled artists to employ the same mold for various figures. This technique was likely adopted in response to the high demand for images, which by this time were produced in quasi-industrial quantities. This sculpture, however, features a wooden mask, pointing to the special nature of the commission. 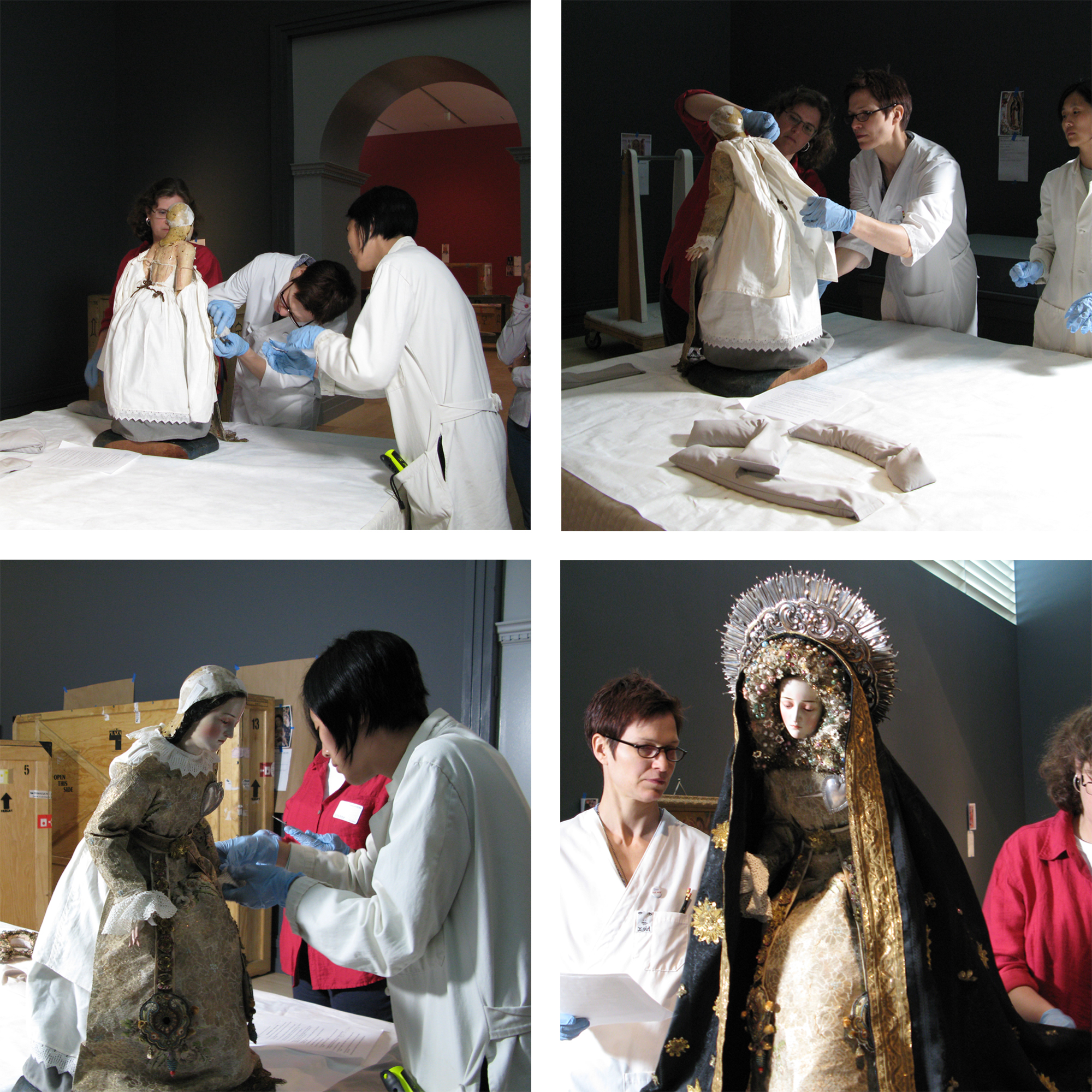 Dressing a sculpture of Our Lady of Sorrows by Manuel Caspicara during the installation of The Arts of Latin America, 1492–1820 at LACMA, 2007, photos © Museum Associates/LACMA, by Ilona Katzew. This imagen vestidera is housed in the Museum de Arte Colonial de la Cultura Ecuatoriana, Quito.

The armature of this type of imagen vestidera (a sculpture conceived to be clothed) was usually left plain (as in the example above). LACMA’s recent acquisition, however, is lavishly decorated with brocateado (gilded patterns in imitation of fine brocades). To uphold the image’s decorum, the polychromer took extra care to add the emblem of the Mercedarian order on the Virgin’s chest, should her clothes be removed and her identity called into question. Seated on her sitial (seat of honor), Mary’s feet barely reach the ground, as they would have originally rested on an opulent crimson pillow.

Legend has it that in the 16th century, King Charles V sent to Quito an image of the Virgin Mary, which became renowned as a wonder worker. After the devastating earthquake of 1698 and the destruction of their church, the Mercedarians took her on a 30-year alms-gathering mission across Spanish America and Spain. The famed image became known as “The Pilgrim of Quito” (“La Peregrina de Quito”); she was dressed and bejeweled by devotees and enhanced with the addition of an image of the Christ child. A rare eyewitness account describing the Virgin’s entry into the city of Potosí, Bolivia, in 1732 detailed her appearance and thaumaturgic powers: “Her miracles are admirable, her beauty uncanny, a well-proportioned wooden sculpture, a little more than a vara [approximately 33 inches] high; they can place her upright or seated (as they do) on an armchair with which she enters cities and towns. Her black velvet hat enhances her beauty, and finally the emotion with which she is seen, greeted, and venerated has and still is unrivaled.” [See Bartolomé Arzáns de Orsúa y Vela, Historia de la villa imperial de Potosí, c. 1705–36, edited by Lewis Hanke and Gunnar Mendoza (Providence: Brown University Press, 1965), vol. 3, p. 339]. 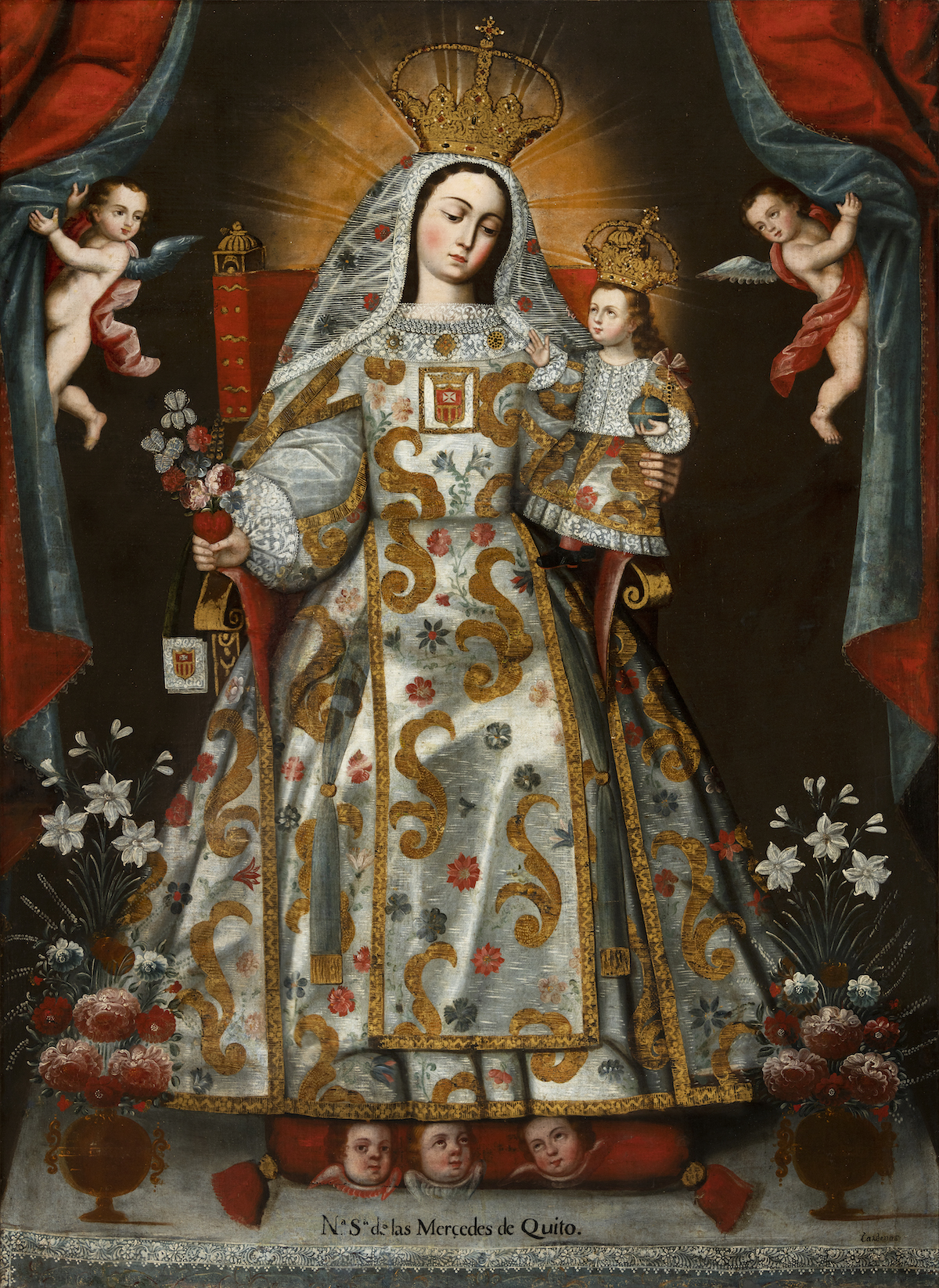 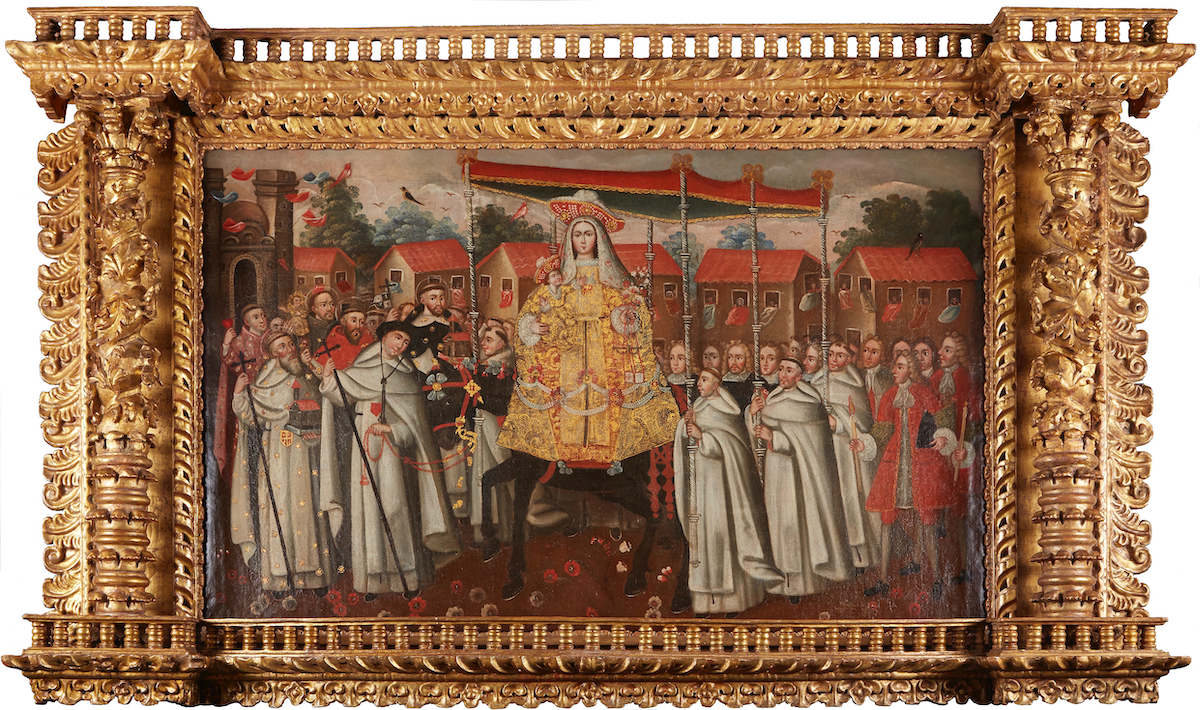 The Virgin’s itinerant life greatly contributed to her popularity and the numerous paintings created of her, primarily in Cuzco. Prints and medals also helped cement her fame. Most images show the Virgin wearing her three-cornered pilgrim hat, either sitting in her altar or riding on a mule as she enters a new town. She is lavishly dressed and bears the Mercedarian shield on her chest, while on one hand she holds baby Jesus and on the other the scapular and shackles associated with the Order of Mercy; occasionally she also holds a lily. 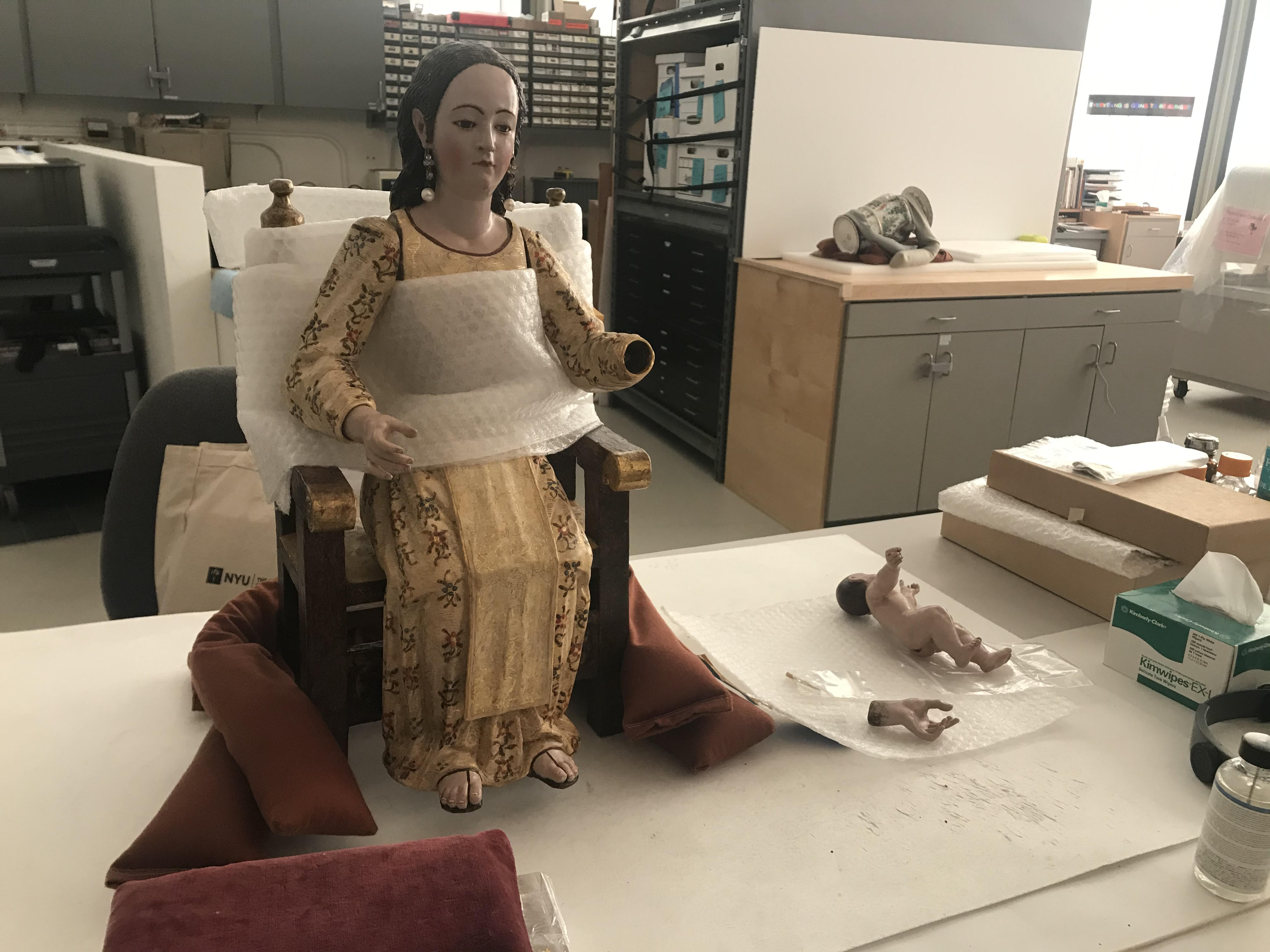 Unidentified sculptor and polychromer, Dressing Image of the Virgin of Mercy or “The Pilgrim of Quito”, LACMA’s conservation lab, photos © Museum Associates/LACMA, by Ilona Katzew

LACMA’s delicate sculpture, with its articulated arms that enabled the image to be dressed and vary postures, was probably commissioned by a devotee at the height of the Virgin’s popularity. Her tiny hands (as well as the figure of baby Jesus) are easily detached, indicating that they were carved separately and affixed to the armature. 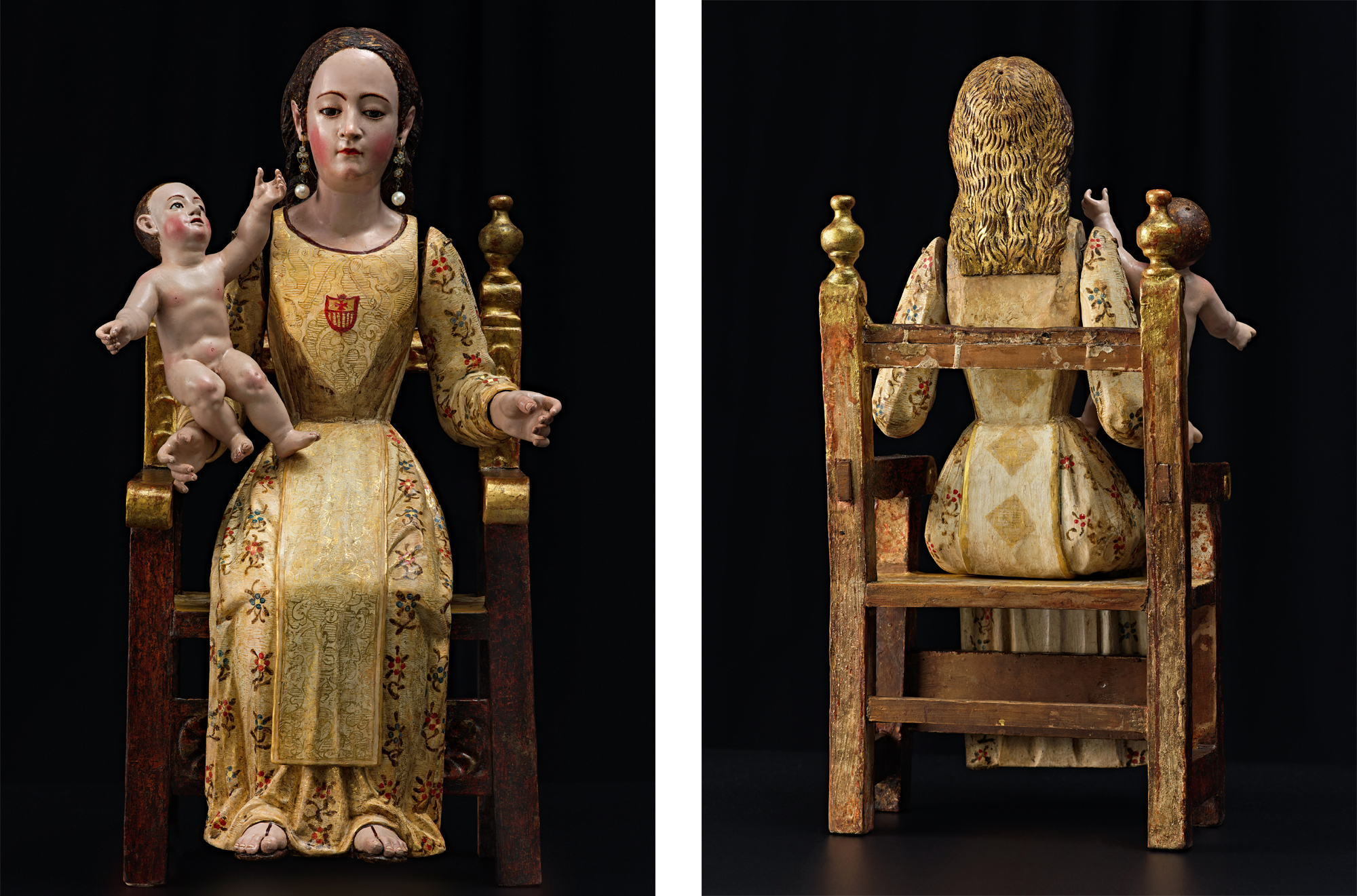 Though carved in the round, the figure is meant to be viewed from the front; the majestic Virgin looks down at the faithful; her painted, bushy eyebrows, finely rendered eyelashes, and flushed, round face intensify her lifelike appearance. The pearl earrings were likely added by a devotee of the image sometime in its life as a sign of affection. Missing her once opulent attire (including possibly a golden crown), this rare sculpted image of the popular 18th-century devotion still commands our attention some 300 years after it was created. Prior to coming to LACMA, the sculpture was kept in a private collection in New York since the 1960s.

Visit Archive of the World: Art and Imagination in Spanish America, 1500–1800, on view through October 30 in the Resnick Pavilion, to see this small yet commanding sculpture from Quito.

Webster, Susan Verdi. Lettered Artists and the Languages of Empire: Painters and the Profession in Early Colonial Quito. Austin: University of Texas Press, 2017.

Further reading on the Pilgrim of Quito: 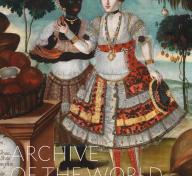 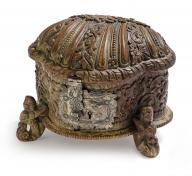