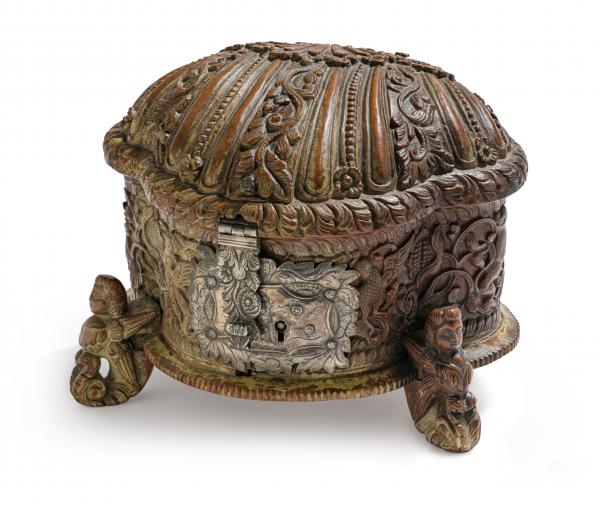 Opening a box invariably brings about a sense of wonder and discovery—even when we suspect what is inside. Small and portable, beautifully made boxes are designed to enclose special things; their exterior mirrors the precious commodities they contain, which are often kept under lock and key. 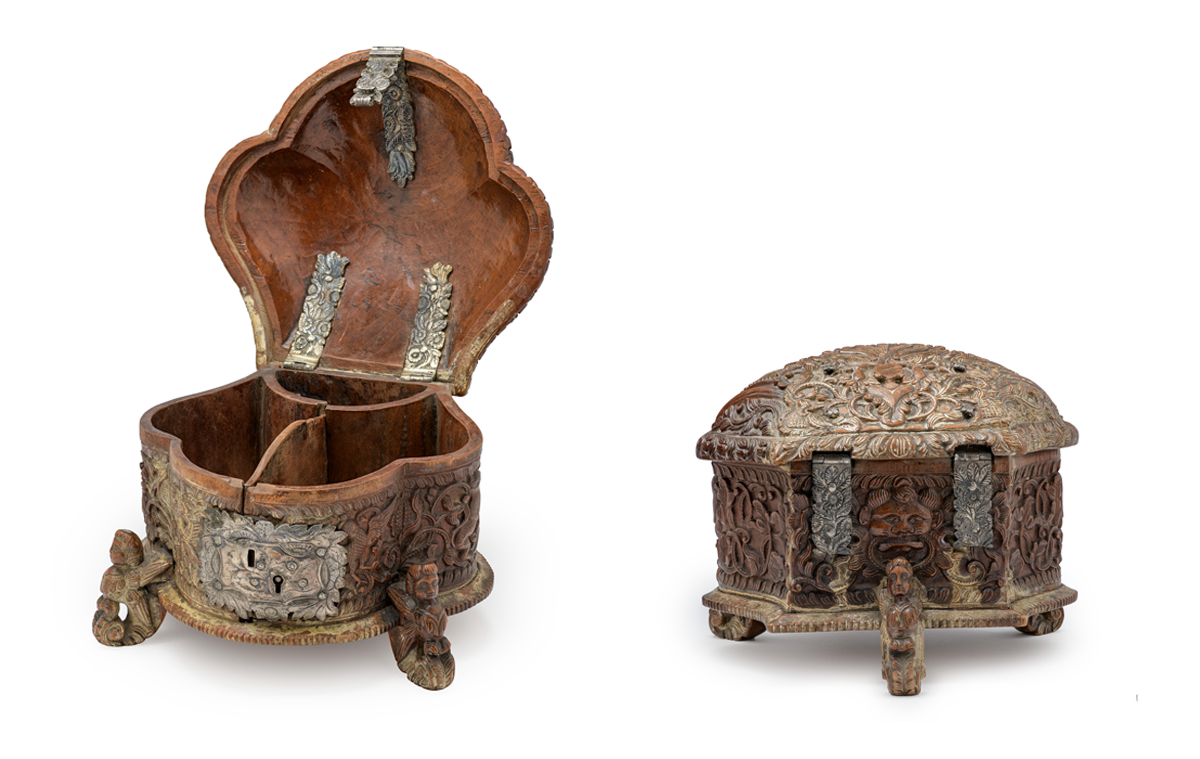 Boxes have a long history across cultures and time. In Spanish America, containers of many types, styles, and materials were cherished as gifts. Known today as yerberas (herb boxes) or coqueras (coca boxes), shell-shaped containers were used to store yerba maté (the mildly stimulating tisane consumed in the viceroyalty of Peru and the Río de la Plata regions), and perhaps also coca leaves (chewed since ancient times to relieve symptoms caused by the high altitude of the Andes) and other substances, which accounts for their interior partitions. This densely ornamented wooden box was dexterously carved by Indigenous craftspeople in the Jesuit missions of Moxos and Chiquitos, in present-day Bolivia. Its whimsical shape is a local adaptation of rocaille (a typical motif of Rococo ornamentation), which was introduced from Europe and was fashionable across media. 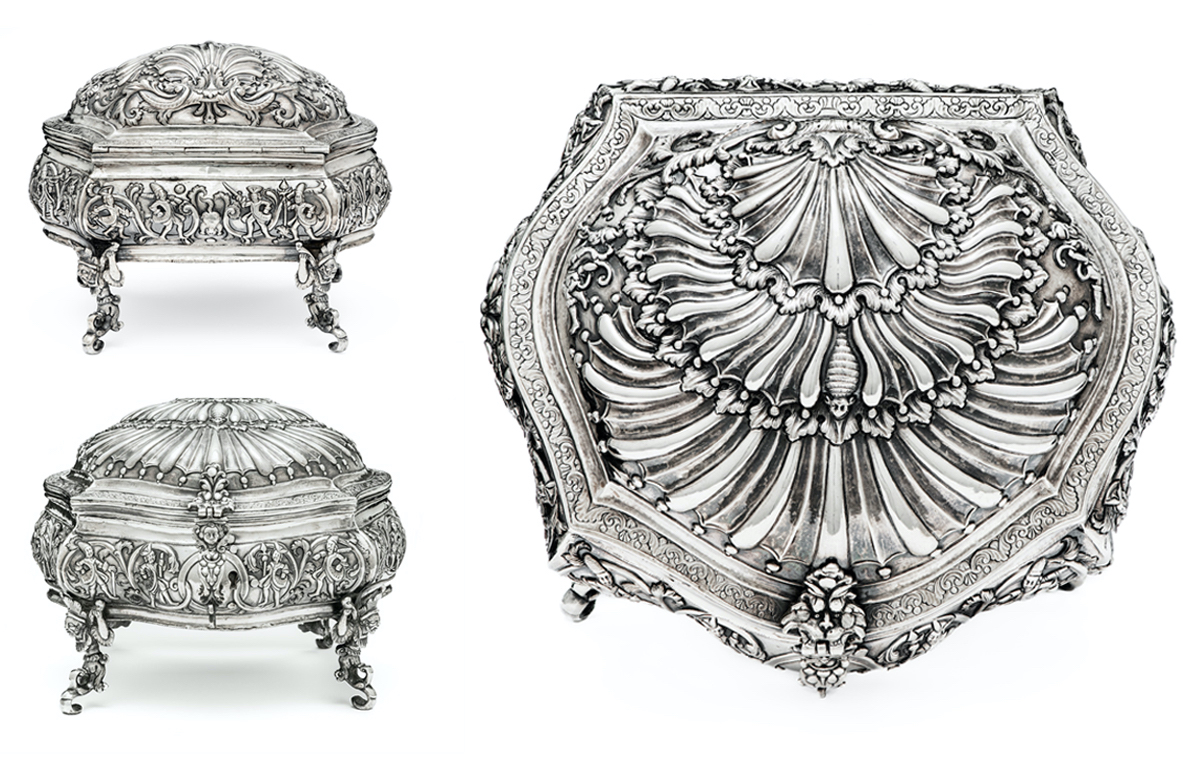 Inspired by foreign prototypes, shell-shaped boxes were also produced in silver—the highly coveted metal that was abundantly mined in Potosí, Bolivia. Silver was largely associated with empire building in the early modern world (c. 1500–1800), and used to embellish churches and the homes of the elite to signal the proverbial wealth of viceregal society. Master silversmiths capitalized on the experience of Indigenous artists who had worked with the material for millennia. Ornamented with an artificial hunt or mock battle on the back, the lid of this fanciful example includes an endearing quiriquincho (an Andean hairy armadillo), lending it an unmistakable local flavor. 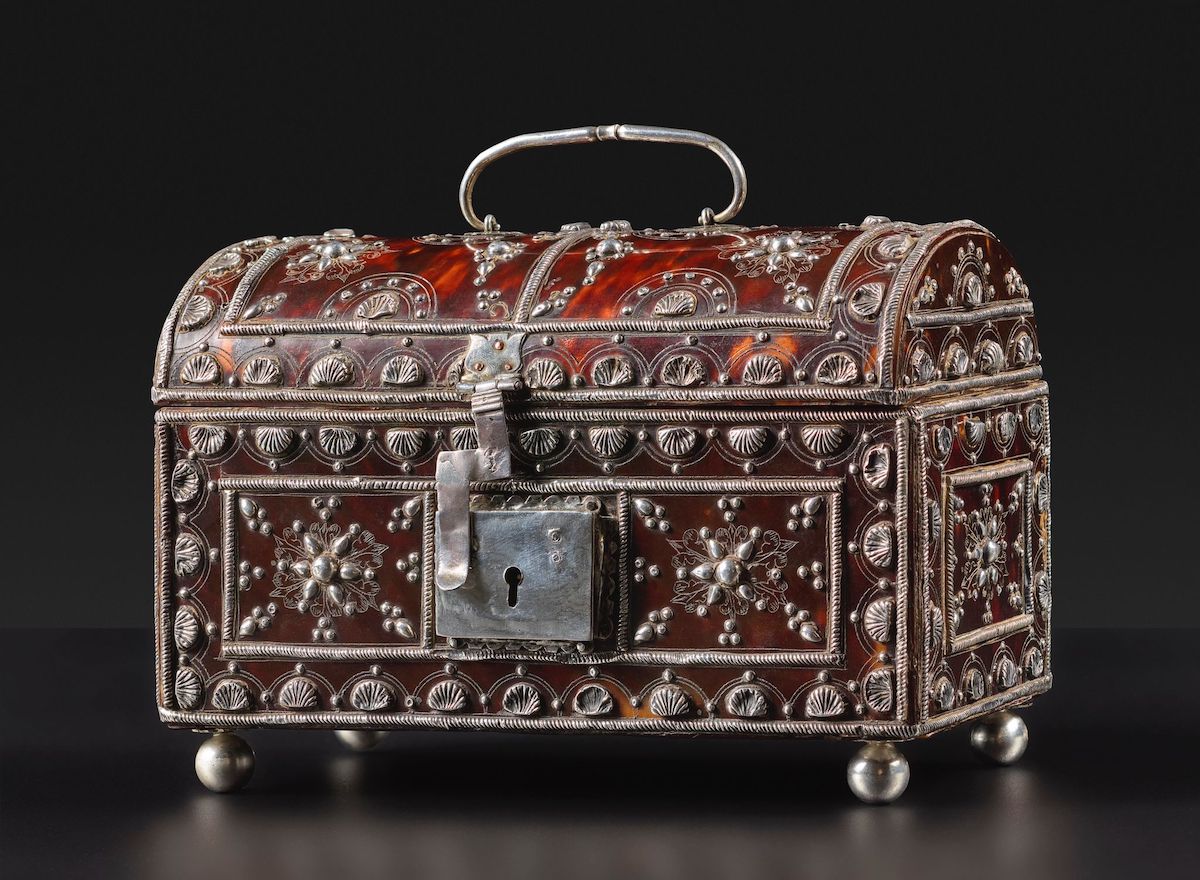 Aside from silver, tortoiseshell was another precious element that was plentiful in Spanish America. This intricate box that combines both materials—along the silver shell motifs that hinted at an abundance of pearls—conjured the legendary wealth of the region. Used to store valuable items such as jewelry, its portability would have made it especially prized as a gift. (Several comparable caskets circulated across Spanish America and were shipped to Europe.) An unusual detail is the engraved inscription on the back indicating its origin, maker, and date of manufacture: “This chest was made in the city of Guadalajara on April 3, 1736, by Don Ildefonso de Zúñiga” (Se hizo este Ba / ul, en la Ciudad de / Guadalaxara, â 3 de Abril del año de 736, / D. Ildephononsus de Zuñi / ga fecit). 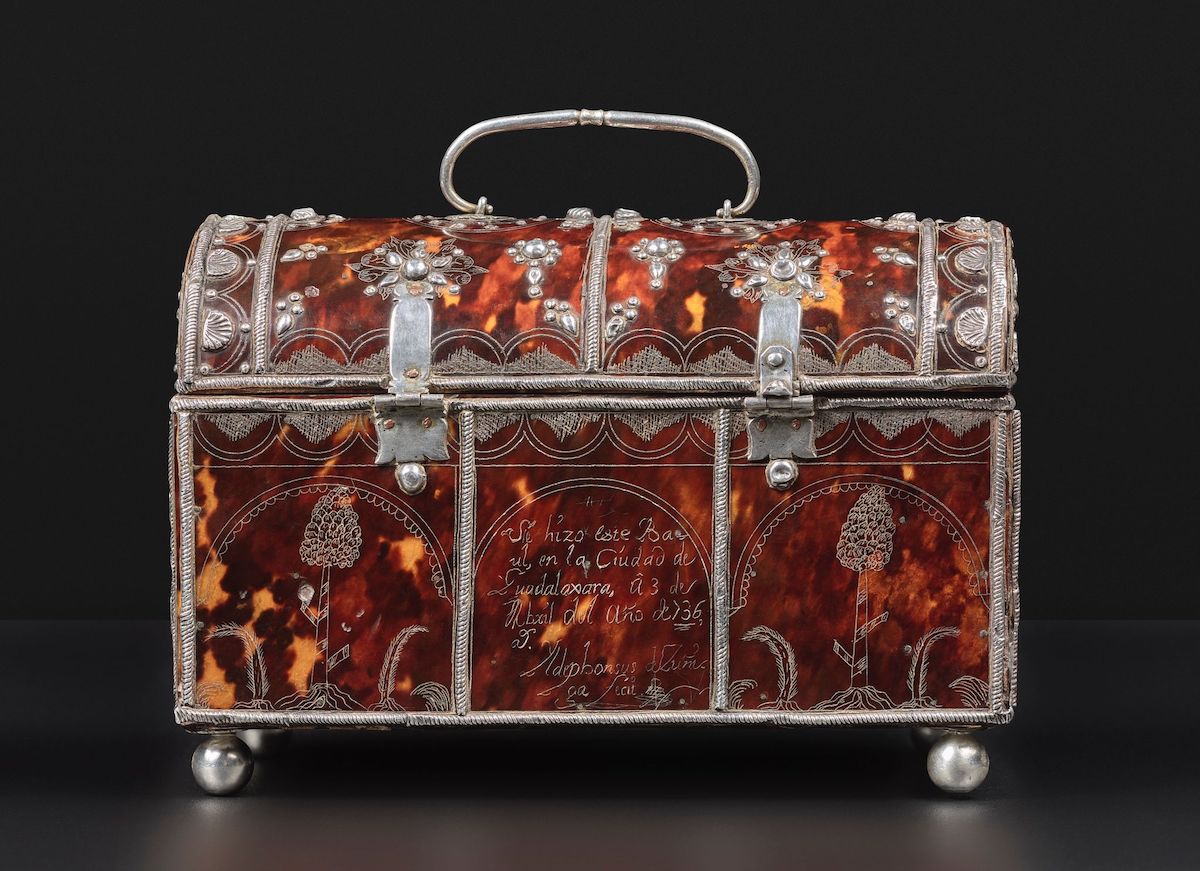 This striking Mexican chest that incorporates bone and tortoiseshell inlay in a fine geometric design was made with a technique known as embutido. This type of pattern has generically been described as “Mudejar,” in reference to a style of ornamentation associated with post-Islamic Christian Spain. Similar designs, however, circulated in gardening manuals that were referenced by different artists and craftspeople in Spanish America. This fact holds special interest as it points to other avenues of transmission and sources of inspiration beyond an alleged pan-Mudejar aesthetic.

Boxes veneered in tortoiseshell and mother-of-pearl were produced in Guatemala and were widely exported to Mexico, Peru, and other places. Pearls were highly prized—their materiality conjured the idea of wealth and ostentation. These intricately decorated objects evoked a range of Asian decorative arts, and some included fanciful chinoiserie decorations. Used as sewing and jewelry boxes among other things, their designs draw on a range of European and Asian sources, which local artists creatively reinterpreted.

With their bold designs and richly textured surfaces, boxes such as these reveal much about contemporaneous forms of taste and the societies that gave rise to them.

Visit Archive of the World: Art and Imagination in Spanish America, 1500–1800, on view through October 30 in the Resnick Pavilion, to see these and other boxes created in Spanish America. You can also pick up a copy of the accompanying catalogue at the LACMA Store. 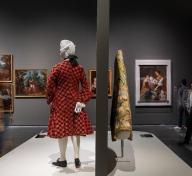