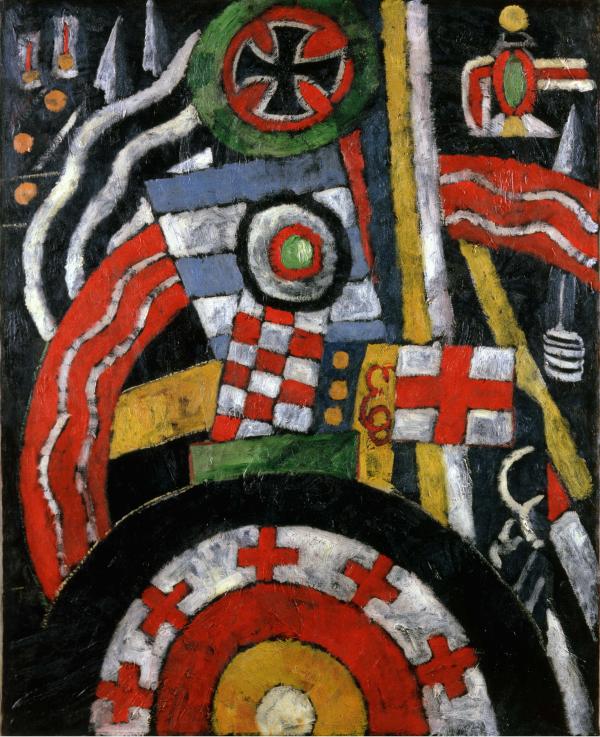 Over the past few years, the Modern Art Department at LACMA has assembled a number of exhibitions that have carefully teased out the many modes and articulations of abstraction. It is within this context that I was truly struck by the astounding innovation and palpable emotionality of the paintings in Marsden Hartley: The German Paintings 1913–1915. The works are poignant and heartbreaking love letters to Berlin; Hartley’s close friends Arnold Rönnebeck and Carl von Freyburg, the latter with whom he was deeply infatuated; and Native American visual culture. There is a raw, passionate angst, which makes the paintings feel contemporary and incredibly relevant, as if they were made today rather than a century ago.

After living in New York and Paris, Hartley stopped in Munich on his way to Berlin in 1913, where he met the artists from the group Der Blaue Reiter (The Blue Rider), including Wassily Kandinsky, Franz Marc, and Gabriele Münter—they advocated a movement toward abstracted forms that were deeply rooted in spirituality. In his letters to gallerist and artist Alfred Stieglitz, Hartley wrote at great length about the artists that became central to his development, of which eight are featured in the exhibition Expressionism in Germany and France: From Van Gogh to Kandinsky: Paul Cézanne, Robert Delaunay, Kandinsky, August Macke, Marc, Henri Matisse, Münter, and Vincent van Gogh. It is thrilling to see the art that Hartley discovered during his travels, and then examine the interpretation and reworking of these ideas in Hartley’s own work, all on the same campus. 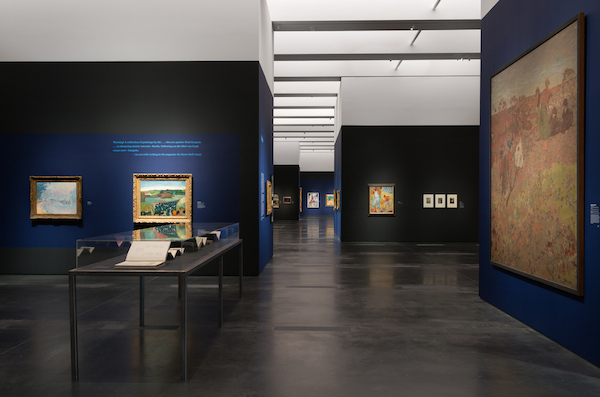 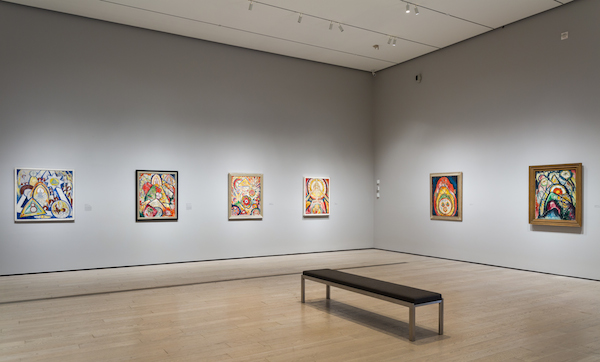 Following his visit to Munich, Hartley settled in Berlin, where he was captivated by its modernity, prominent gay community, and military pageantry. It was here that he felt truly accepted: “I have every sense of being at home among Germans and I like the life color of Berlin—it has movement and energy and leans always a little over the edge of the future . . . I want so much to establish myself in the ultra modern scheme here.” Combining the intoxicating spirit of Berlin with Der Blaue Reiter’s spirituality, Hartley’s first group of works (often referred to as the “City Images”) evidence the beginning of a style with an entirely new visual lexicon. These works are rife with religious, mystic, and personal symbols that feel almost like an opening into Hartley’s psyche. 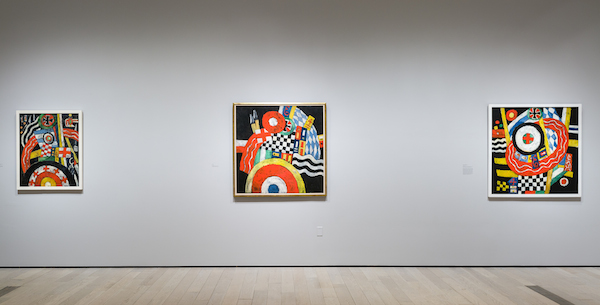 This new language develops further after the love of his life, von Freyburg, is killed on battlefield during World War I on October 24, 1914—Hartley’s deep melancholy is intensely felt in what are now called the “War Images.” These paintings act as profound memorials to his great love and the many others who suffered greatly on the frontlines. Hartley describes, “It is all very hard as a friendly spectator to have seen and still see the countless fine specimens of manhood go out and never come back—it gives the imagination a little too much to do . . . So it goes—and I sit alone much—the spectator of the great tragedy of the heart and soul of mankind.” 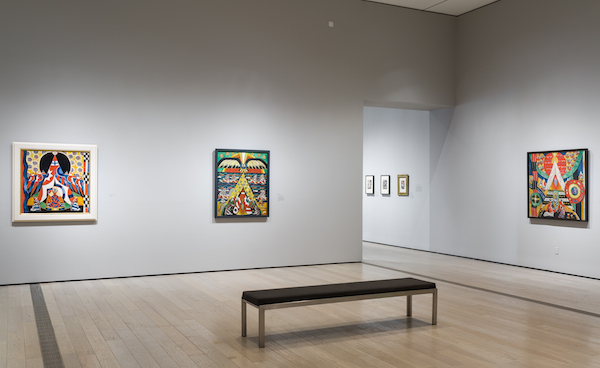 Simultaneous to his “War Images,” Hartley also embarked on the “Amerika” series, which combines the compositional structure of his earlier work with symbols represented on Native American artifacts that he saw in Paris and Berlin, which hold some of the greatest collections of Native American art in the world. Here we see Hartley’s continued identification with groups who have been treated as outsiders in their own land as well as his admiration for cultures that are strongly connected to spiritualism. Hartley admits, “I find myself wanting to be an Indian . . . to go to the West and face the sun forever—that would seem the true expression of human dignity.”

For the artist, “There is real reason for all these signs but it remains mystical—and explanations are not necessary.” Even without background, these paintings have an enormous visual impact; yet, armed with a glossary of sorts helps us map his extraordinary genius.

As such, when the show was just about to open, I made a curatorial “Marsden Hartley Symbol Dictionary.” I have selected a work from each of the three galleries to give definition to Hartley’s visual vocabulary. From this you will see the pictorial language that the artist established and the heartrending conceptual and emotional layers of his paintings. 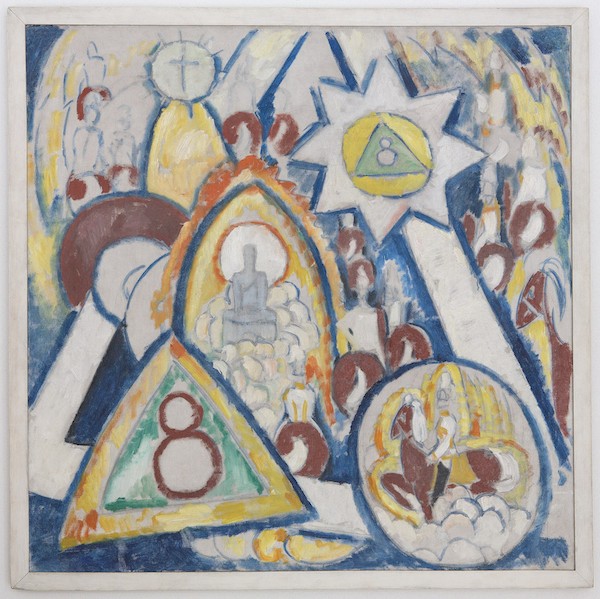 The triangle in Christianity symbolizes the Holy Trinity (the Father, the Son, and the Holy Ghost). In addition, Hartley has written that it also refers to his close friendship with von Freyburg and Rönnebeck.

Considered mystical, the number eight has occult implications of physical and spiritual regeneration (the shape is the symbol of infinity).

As well as tying in Buddhism, Hartley bought a Siamese Buddha figurine, seen in the center left of the painting, while he was in Paris with Rönnebeck. Hartley later gave it to Rönnebeck as a gift.

Soldiers dressed in white on horseback are the Cuirassiers of the Kaiser’s Special Guard. Dressed all in white and wearing helmets with the Imperial Eagle and white manes, innumerable rows of the soldiers strutted proudly through the streets during military parades.

On German military uniforms, the Kaiser wore the eight-pointed star over his heart, and the soldiers wore it on their foreheads. The star indicated the High Order of the Black Eagle, the most-esteemed Prussian order. Additionally, in Buddhism, a wheel with eight spokes points to the path of enlightenment, which is further emphasized by the number eight at the center of the star. 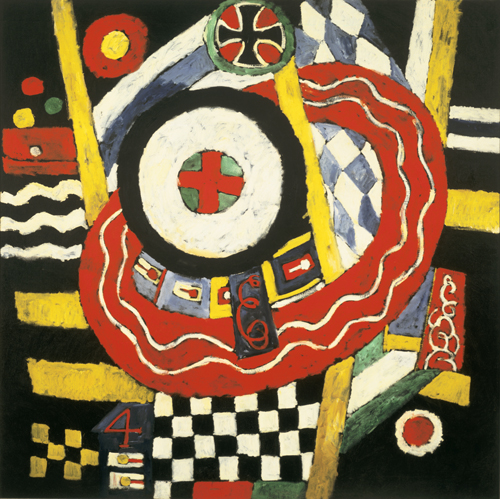 The number four represents the fourth regiment, of which von Freyburg was a member.

The white rectangles with red circles in the center (seen underneath the “4” for example) reference von Freyburg’s silver shoulder straps, which Hartley kept for his entire life.

The “War Images” are almost exclusively on a dense black background in order to symbolize mourning.

Concentric circles black, white, and red are the cockades in the Imperial colors that soldiers wear on their uniforms.

The cursive E symbolized the Queen Elisabeth Regiment of Grenadier Guards; Rönnebeck was in this unit.

The Iron Cross (in black) is one of the highest awards for bravery. Von Freyburg was posthumously given the award; the Kaiser also personally bestowed it upon Rönnebeck. In military propaganda, the Iron Cross was often seen surrounded by laurels and ribbons, which Hartley nods to with the circles surrounding the cross.

The Red Cross means injury or death as well as references the International Red Cross who was often seen in Berlin during the war. 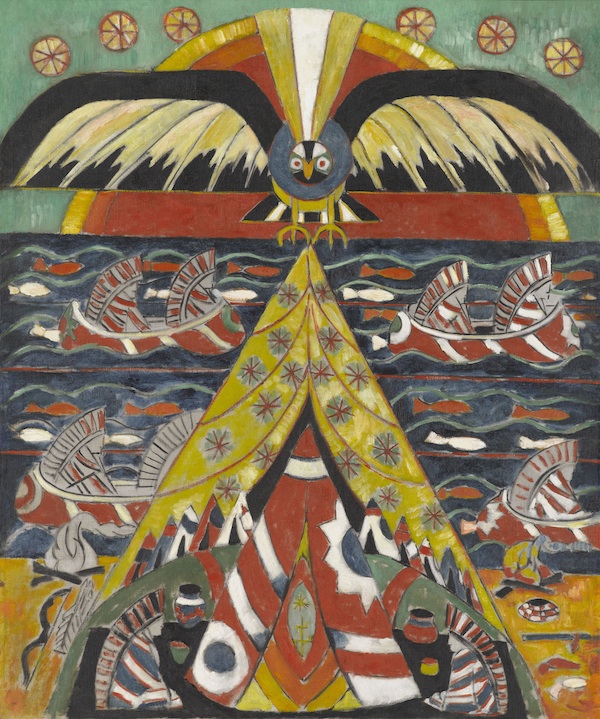 The Northwest coastal tribe Kwakiutl used the mythic thunderbird in much of their art (it was documented in the 1914 film In the Land of the Head Hunters by Edward S. Curtis). In addition, the German government believed the eagle, which looks very similar, symbolized Prussia and the Kaiser. Furthermore, art historians have theorized that the eagle imagery was a symbolic self-portrait of Hartley because of his beak-like profile.

In the “Amerika” series, Hartley retains the compositional structure of the triangle; however, it has been turned into a teepee, with the inner triangles representing their folded entrances.

Gray and red men in canoes are the chiefs in feathered headdresses heading down the river. Like the Cuirassiers in the first room, they are organized in several rows, flattening the painting’s perspective and making the paintings feel as if they are tapestries of patterns and shapes rather than mimetic reproductions of the world.