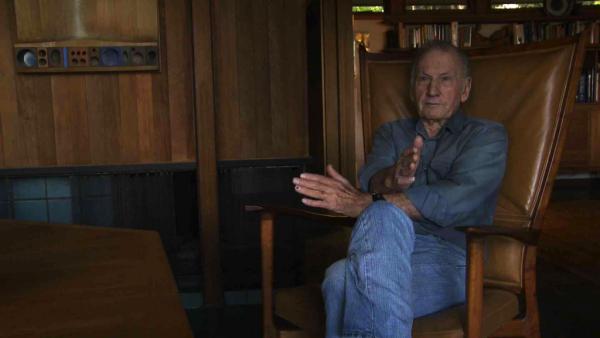 Recently, we had the fun of shooting video interviews with several designers who are part of our upcoming exhibition California Design 1930—1965: "Living in a Modern Way". All were active in the postwar period, making everything from furniture to jewelry to enamels and weaving.

Not surprisingly, they live in extraordinary homes. Perhaps the most stunning is that of John Kapel, who designed his house with architect Jerry Weiss. This photo of John sitting in one of his studio chairs (which will be in the exhibition) doesn’t fully capture the beauty of his home, but it does suggest the environment, with its blue tile floor, hand-built wood furniture, and sculpture – all by John. In this photo, he’s talking about the design of the chair, and the subtle geometry that make it visually appealing from various angles. 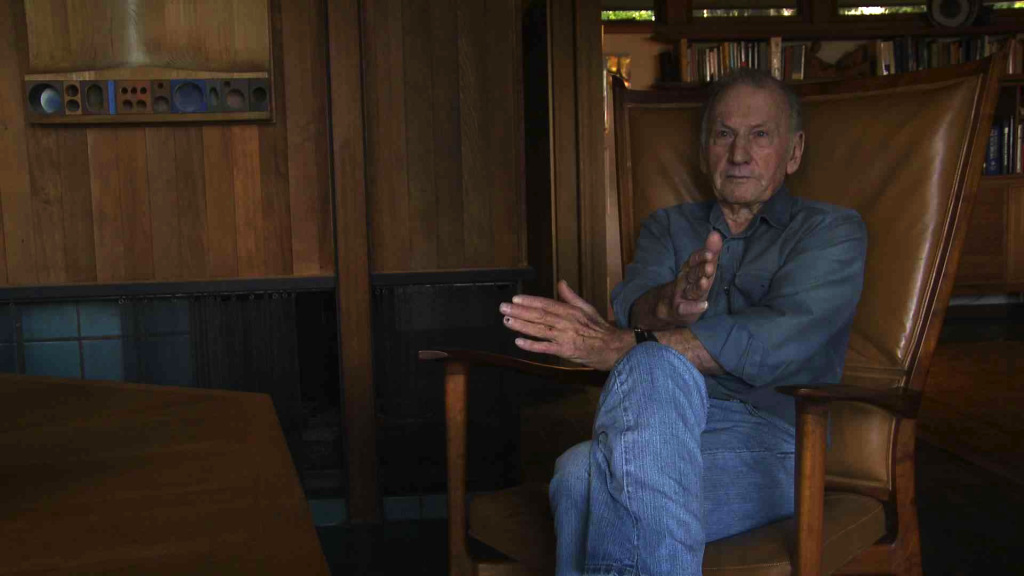 
John Kapel at home in Woodside.

The setting is spectacular as well – nestled into the hills above the San Francisco Bay, in Woodside. 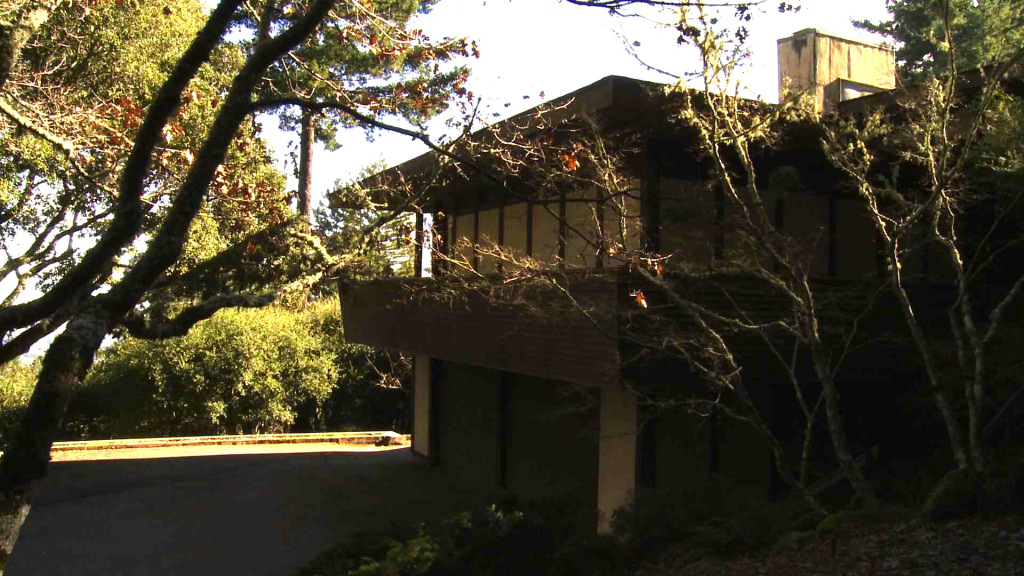 John Kapel's home, from the road.

We also visited ceramist Harrison McIntosh at home high on a hill in Claremont.  Here he is in his studio, at the same workbench he’s used since the 1950s, when he shared the space with Rupert Deese. 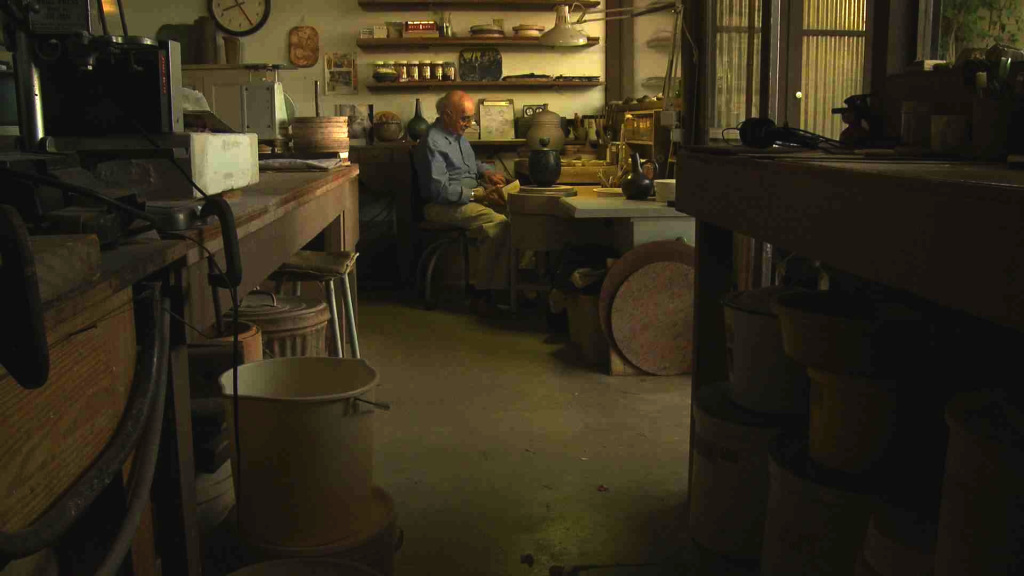 Harrison McIntosh in his studio.

The rustic modern house was designed by architect Fred McDowell for Harrison and his wife Marguerite and their young family in the 1950s. Here it is seen from the rear patio. 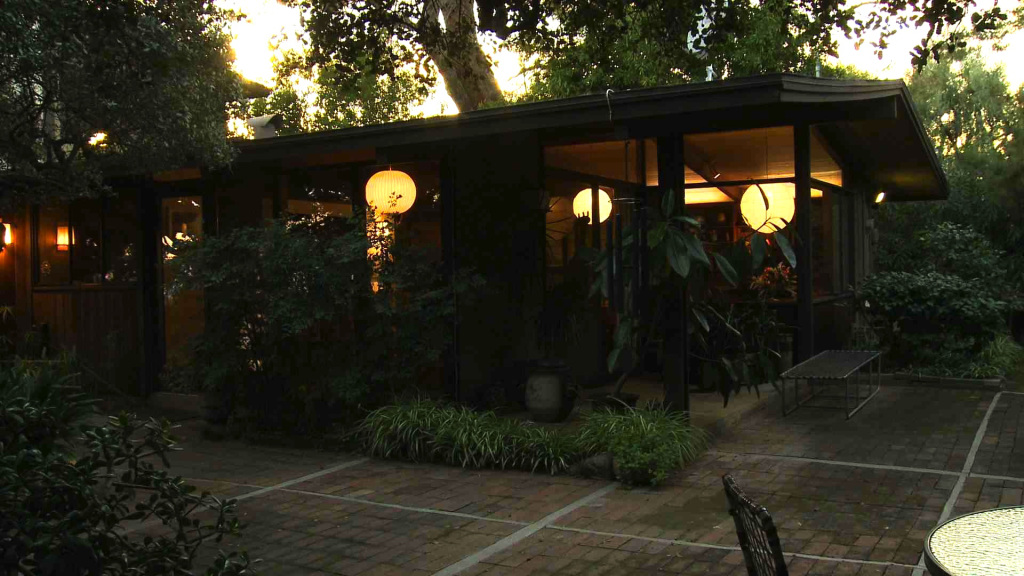 Gene Tepper lives and works aboard a houseboat in Sausalito. Here he is on his back deck with Mount Tamalpais in the background. 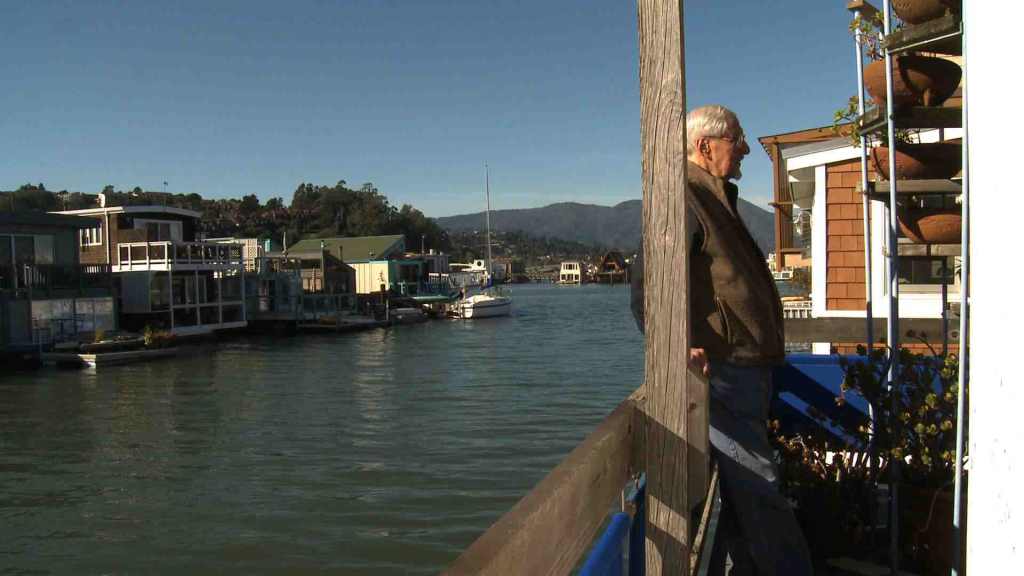 Gene’s studio is down a flight of stairs – below deck, you might say. The surface of the water, which rises and falls with the tide in relation to the windows, creates dancing reflections inside the studio, where Gene has a collection of drawings and paintings. (The piece in our show is a convertible dining table/cocktail table from the 1950s.) 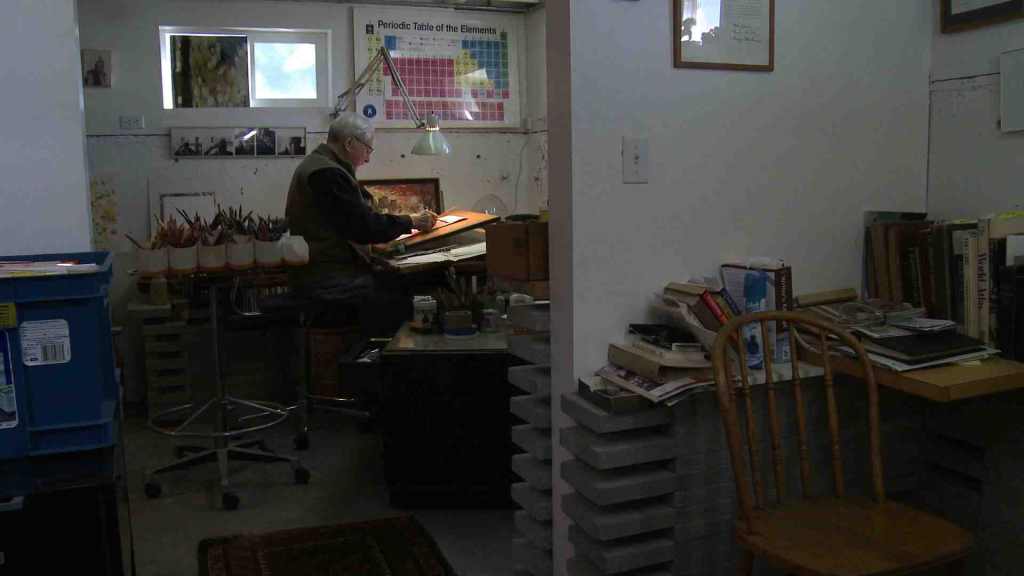 Gene Tepper in his studio.

Just up the hill from Gene, June Schwarcz is still producing in her enamel studio, in the basement of her small but exquisite home overlooking the San Francisco Bay. 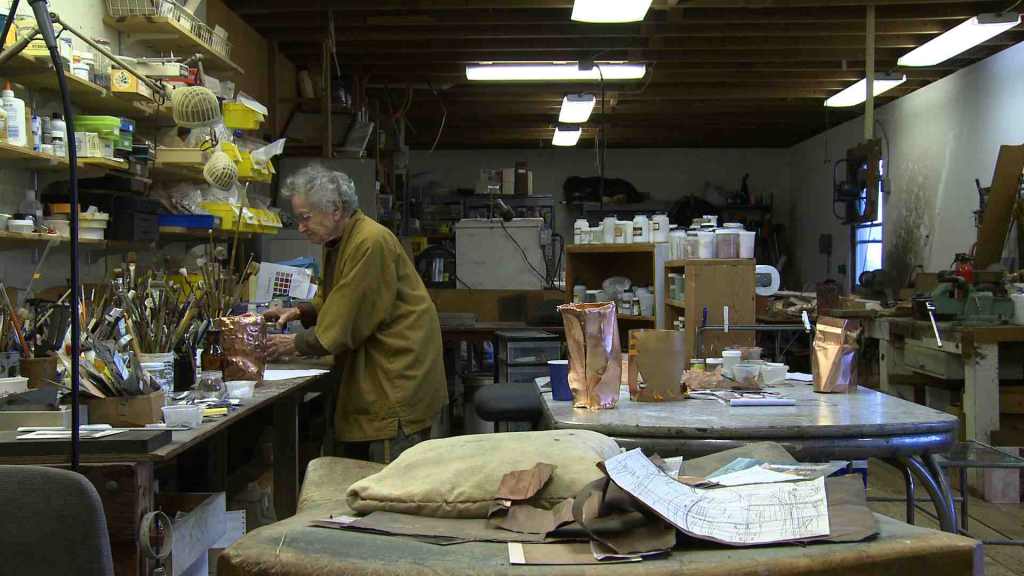 June Schwarcz in her studio.

You enter the modestly-sized house through a lush garden… 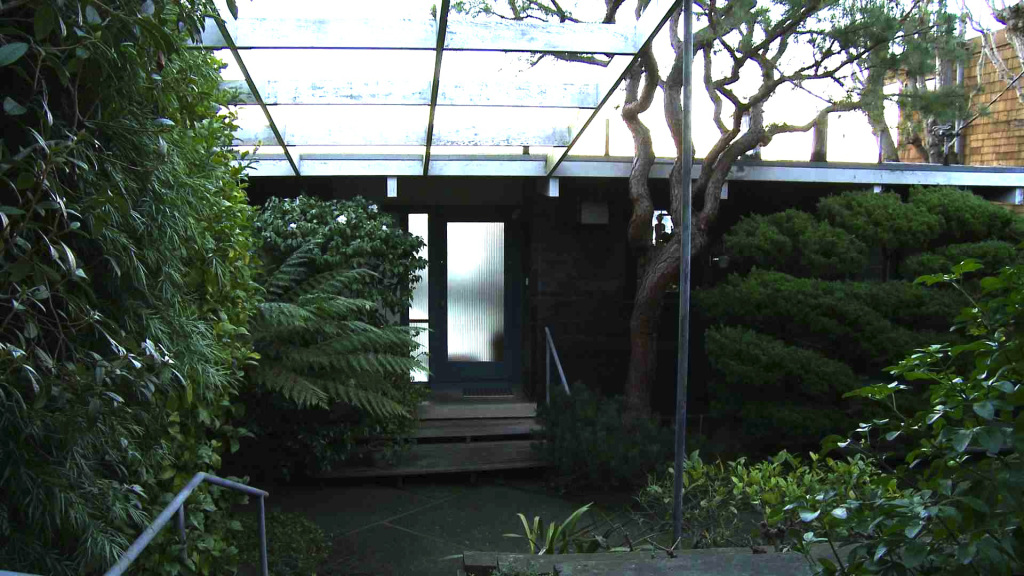 …and enter an open living space filled with Asian antiques, African sculpture and paintings and objects June has collected over decades of living there. A wall of windows looks out on this: 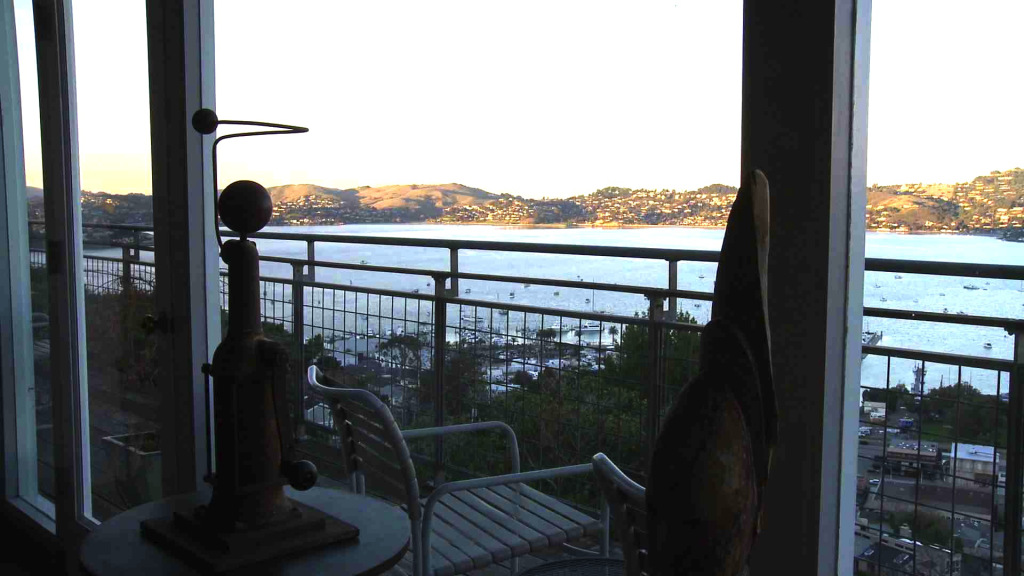 The view toward Tiburon. 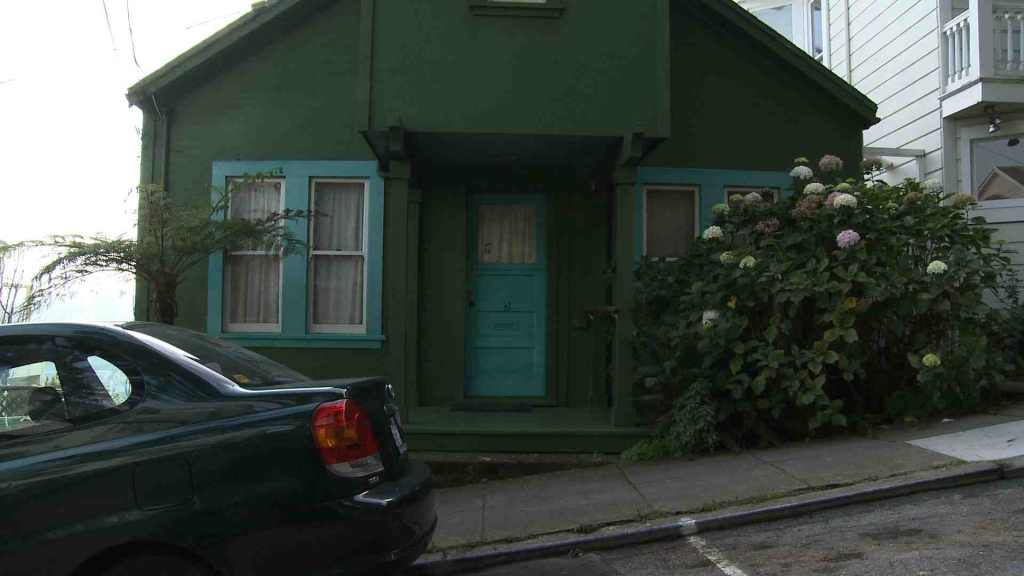 She bought the house and—as she proudly tells it—paid off her mortgage all by herself in one year (she was widowed when her first husband’s plane went down in World War II) with her teaching income. 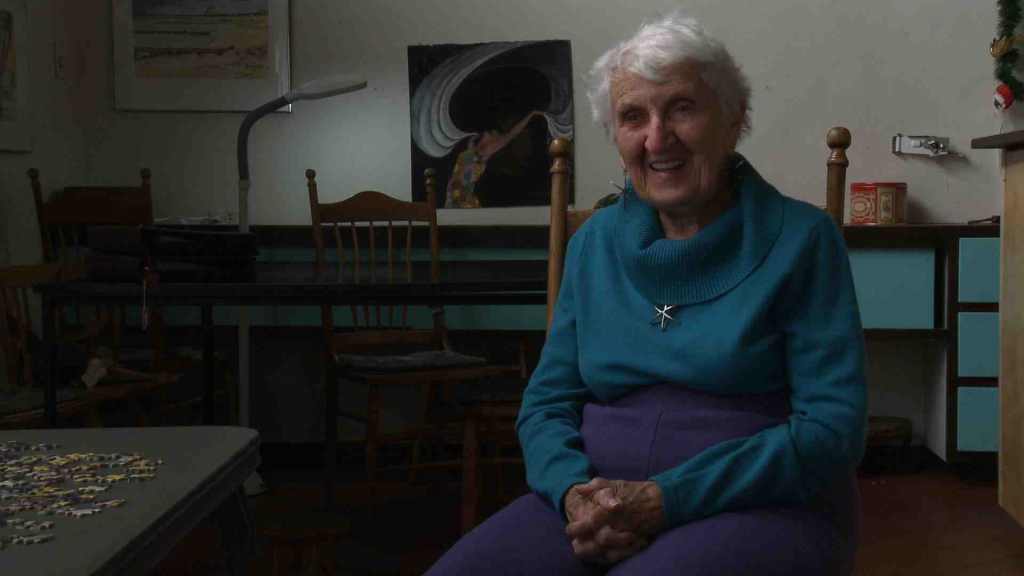 The inside of the cottage is charming… 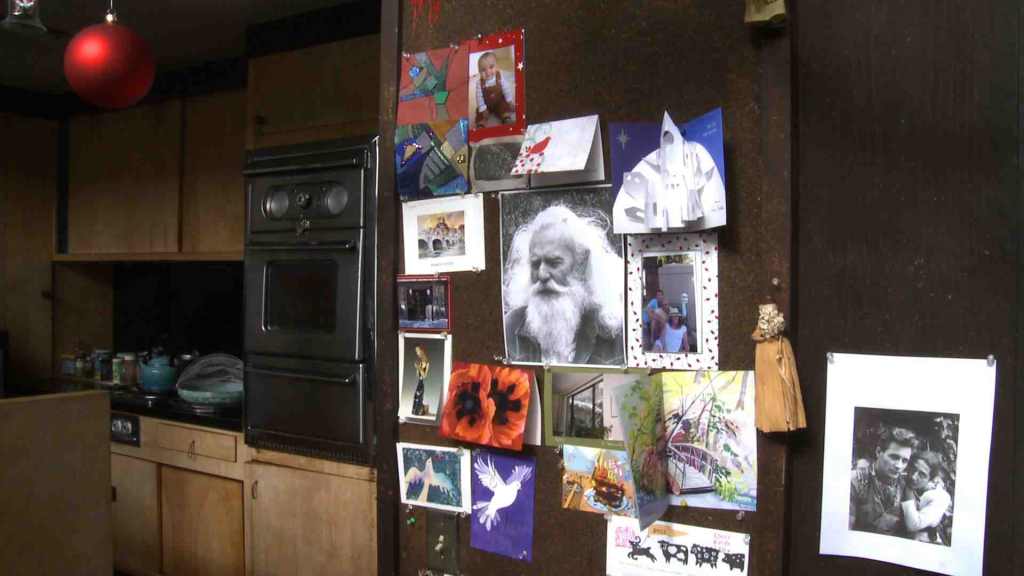 A wall of family photos and mementos near the kitchen.

…though my favorite part is the clawfoot tub on the back deck overlooking the city. 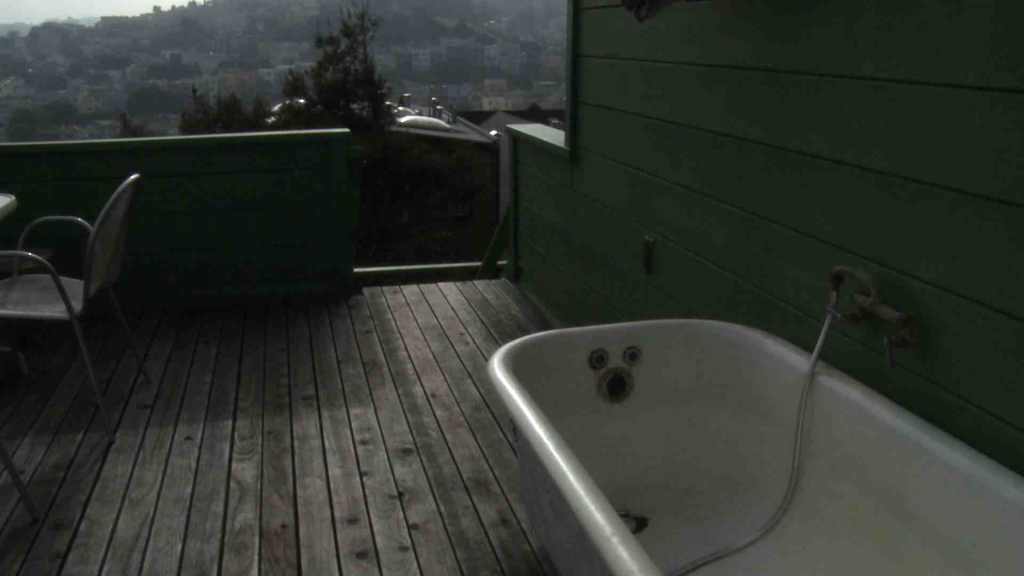 A tub with a view.

We also made it over to Berkeley, to textile artist  Kay Sekimachi’s home and studio near the university. Here’s Kay sitting in a chair by Sam Maloof, one of the other designers in the show. 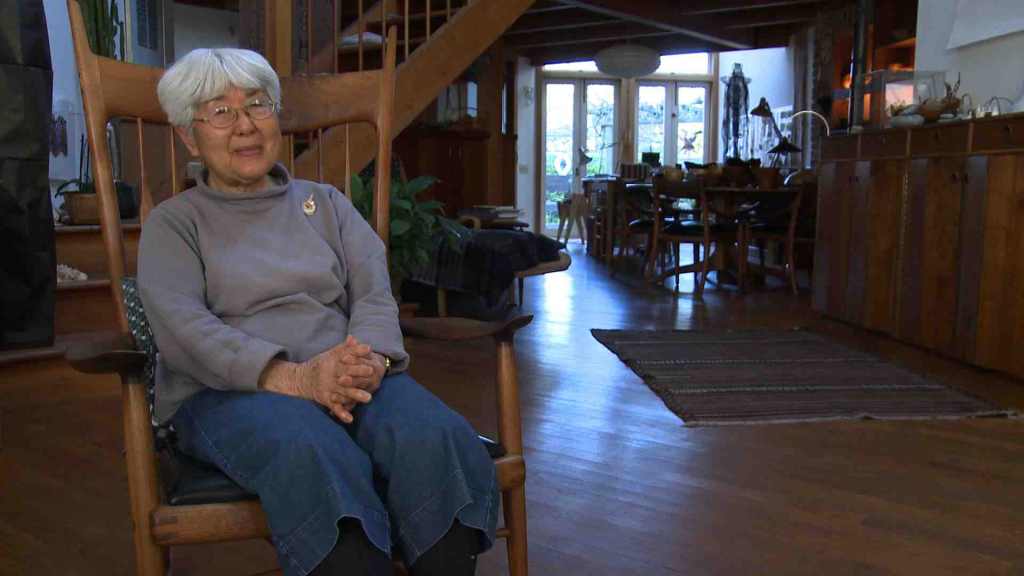 Watching Kay weave on one of her looms is mesmerizing. 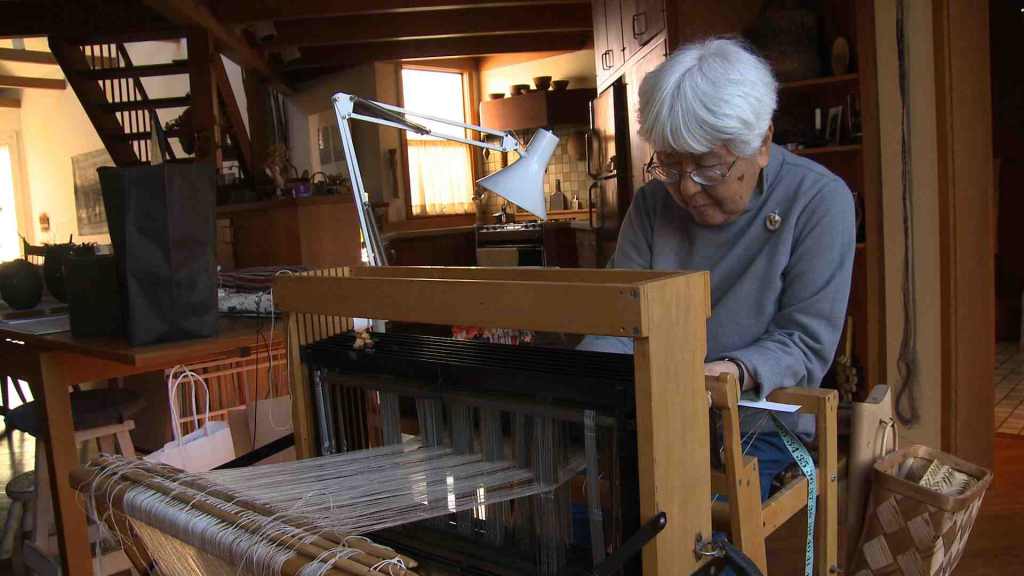 Kay at one of her many looms.

Curators Bobbye Tigerman and Wendy Kaplan are hosting a discussion at Dwell on Design this weekend, at 2 pm on Friday. They’ll talk about the exhibition and California’s unique brand of mid-century modern.

Later this summer, we’ll share full video interviews with the designers you see here and more.