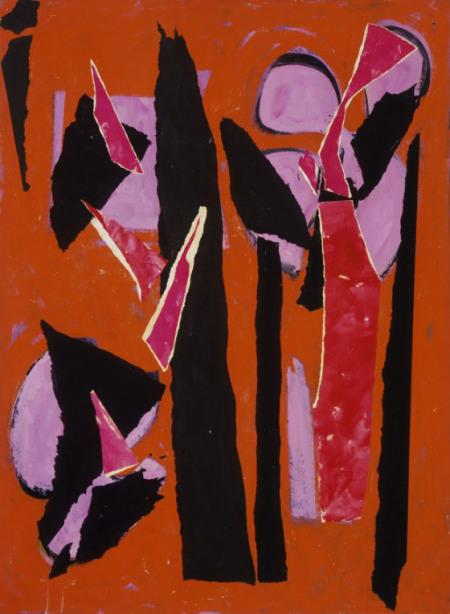 A Poem, on a Painting

When we launched our new collections website, we committed to building out the information that accompanies each work of art. Our goal is to offer the best contextual and interpretive information that we have available, and, over time, reveal the ongoing scholarship that happens here at the museum. In addition, we want to use our website as a space for more creative interpretation of artworks. And in that spirit, educator Elizabeth Gerber thoughtfully proposed that we invite poet Karen Holden to compose a poem inspired by one of the paintings on view in our Modern Art galleries: Desert Moon, by Lee Krasner. 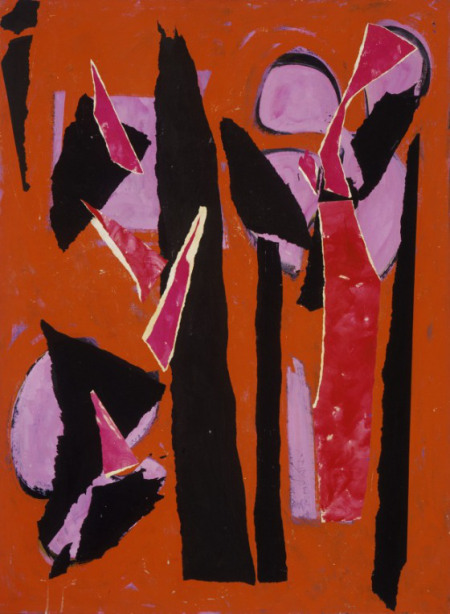 Karen, who has long contributed to education programs here at the museum, addressed the challenge with dedication and originality. (When I met with her to record the reading of the poem below, she was carrying a rigid file box, containing her neatly-stacked papers, her sharpened pencils, and a ruler. Be gone, stereotype of the unruly poet!) Karen talked through her process, both analytical and creative, of deep engagement with the painting. (She visited the museum every weekend for six weeks, to sit with the painting, and write.) Here’s what she said about the process:

HOLDEN: This is not necessarily a painting I would have chosen, as much as I admire Krasner, so it was great to have it assigned. It was a real challenge. The longer I spent with it, the more I saw it. Each time I visited I wondered: Why is it called Desert Moon? Every week, I looked and I wrote, and when it came time to compose the poem, I collaged it from all the responsive writing I had done, adding and stripping away over and over until the poem revealed itself. Just as Krasner had collaged Desert Moon by adding pieces torn from her old paintings to the canvas along with the paint. I also did a lot of reading about Krasner, and the Abstract Expressionists. I was delighted to learn that Matisse, who I love, was a huge influence on her, especially his painting, The Red Room, which I reference in the poem. And I learned that Krasner would do a painting, and a title would come to her. It wouldn’t necessarily be descriptive or a literal fit. The four paintings in the gallery that mean a lot to me are the Motherwell, the Rothko, the Krasner, and the Kline. I initially thought the poem might be a conversation between those four paintings, but that wasn’t quite right. Then I thought it might be a conversation between the artists. No, again. Finally I realized it was a quartet. It was about the paintings, and the artists, and Krasner and my response to them all. The first section, Expectation, is about trying to understand the painting from the title. Conversation is about the painting, and Krasner, in relation to the other paintings in the gallery and artists in her life. Inspiration is about her process, her courage and her value to Abstract Expressionism. The final section, Revelation, was just that. Once I stopped trying so hard to "get" the painting and let myself simply experience it, the last line of the poem arrived. What a wonderful surprise!

And here is Karen’s poem:

Painting is the silence of thought and the music of sight.

Moon, where are you?
Hidden in one, two, three, stark trees
Filtering through a brutal desert sky, a spiky
Desert washed blood red, torn against sharp
Black stones, in the claret-stained night
No fuzzy thumbprint, no cool clear light
Just hard shards, the sharp shards of a cracked heart
Silence and the dulling absence of reflection
Barren desert of cactus, of stone, red sand, pink
Bloom and the moon, diminished
Where is the moon, desert?
Where is that sober, milky light?
Maybe it’s all moon, scraped and shaped by time
A terrain of absence, of waiting in the quiet
Missing moon, making what is present, alive

Rothko’s red painting, titled “white”
Absent black, floating red, the canvas sighs
Not harmony, but balance
The bruised red of late apples, persimmon and rose
Voices in a hushed room volley
Across the Hoffman, the Motherwell, the Kline
The memory of Matisse’s red room, his own
Discourse with the moon seeping into everyone

Approach is everything
Tear the old to paper the new
It starts with red
And then the darkness follows
Finding something in nothing
Making something from nothing
Relationship is everything
In painting and in life
You taught them all
To be bold, not to lie, to stare
The image straight in the eye
Not to flinch in a fight
From outside to inside, the moon
Slides, lighting the studio, where
Your own hard rhythms rise
The red of blood, not fire, the black of night

You must get close, and wait
As close as the sky-hidden moon will allow
A stark red desert, night-folded trees
Invisible force of the wind, blunt light
Burnished, but not bright
Not the cool articulate moon, only moonlight
On serrated stones and what’s missing: morning
Horizon, plain, the rest flat crimson and black
Shooting upward out of the frame
Or simply: Paper. Canvas. Paint.