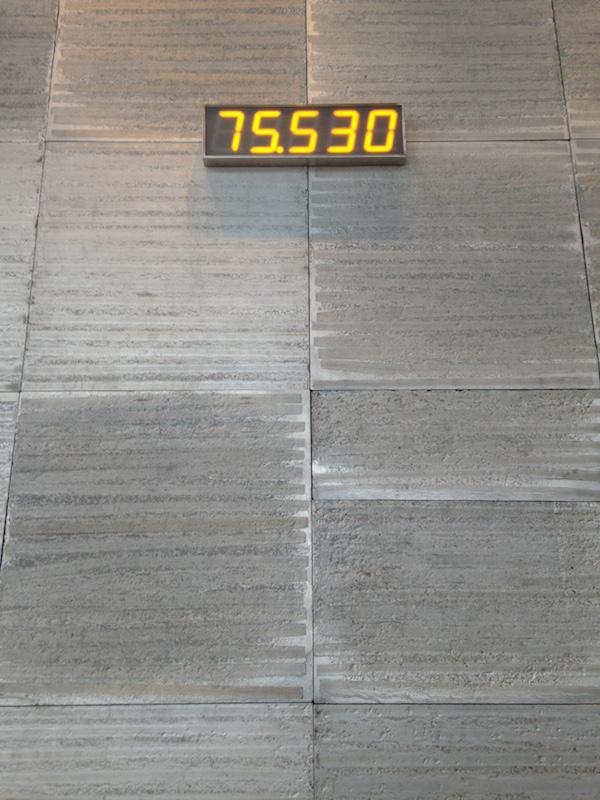 Solving the Mystery of C+M’s Artwork: Jim Campbell’s "Untitled (for the sun)"

With over 100,000 artworks on view in LACMA’s nine buildings, I wasn’t expecting to come across another while waiting for my iced chai soy latte at Coffee and Milk (C+M) on LACMA’s campus. But right there, on C+M’s silvery wall, hangs an ever-running digital display.

The piece is Jim Campbell’s Untitled (for the sun), a type of analog clock that tracks the rhythms of light outside, displaying the percentage of day gone. Curious, I called Mr. Campbell himself to discuss the timer. 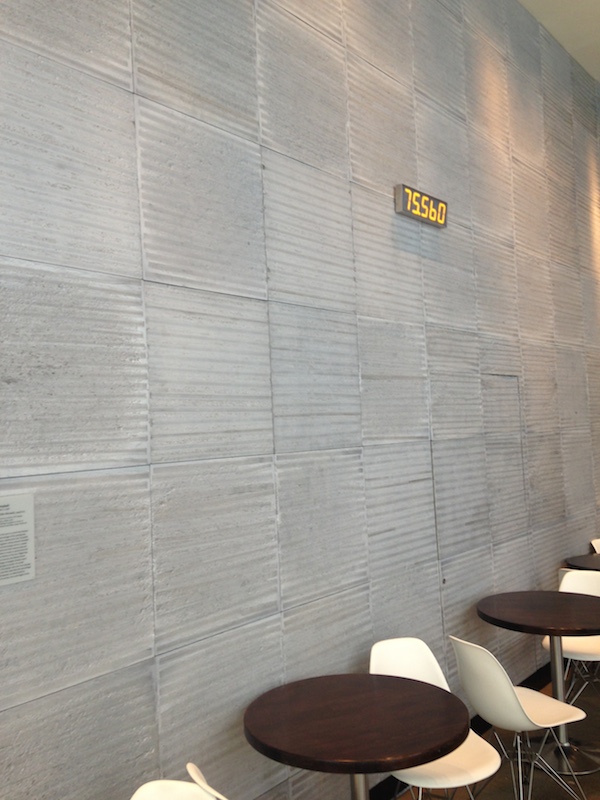 Vanessa Wilson: Tell me about Untitled (for the sun).

Jim Campbell: Sometimes the piece is confusing to people. It’s actually an incredibly simple work. It doesn’t really track the position of the sun, all it does is measure the light level outside [by using] a very small light sensor that is connected to the display. For example, when it says “50.000,” it means it is midday, which is not necessarily noon.

VW: How did this idea come to you?

JC: I wanted to build a clock that didn’t need to be set; it sets itself, just based on sunlight. Like our bodies do. In the winter during the day the display goes very quickly, because it synchronizes itself to sunrise and sunset, like we do—we try to get things done before dark, whether it’s unconscious or not. So the work has a speed change between summer and winter during the day, also like we do.

VW: What is its purpose?

JC: I was interested in what would it would be like to live with a different kind of clock, one that lets you know how much of the daytime is gone. How would it affect your perception of the day, of time?

The original notion of the hour, the medieval hour before there were clocks, was defined by dividing the length of time between sunrise and sunset by 12 (and at night between sunset and sunrise by 12). We now call these lengths of time unequal hours (see below), as they were not always the same length. They even had different “calibrated” candles that would be burned at different times of the year to synchronize with the sunlight at different times of the year. 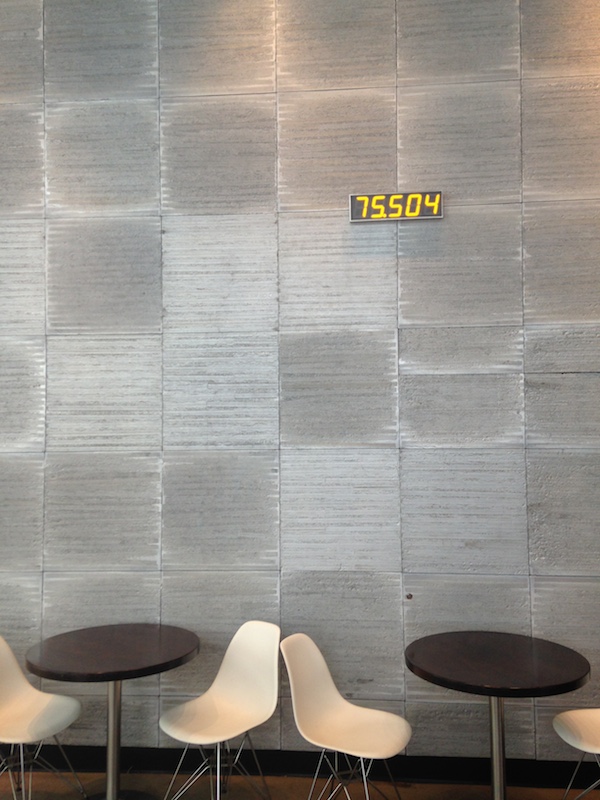 VW: Is the piece site specific? What would reinstalling it entail?

JC: It’s not site specific, but it does need to be calibrated to light levels wherever its new location is. It needs to be calibrated at dusk (or dawn), a short period of time that lasts about five minutes between day and night. This moment in the day is unique to dusk and dawn. If you look around, you will notice that, no matter how dark it is during any day, it could never be this dark. And no matter how bright it is during any night, it could never be this bright. It must be dusk or dawn. The work also has severe “jetlag.” It takes three or four days to synchronize itself to the light levels to a new location.

VW: You’ve been adamant on clarifying that Untitled (for the sun) doesn’t necessarily measure the position of the sun, but the light of the sun. I wonder, then: why include “(for the sun)” in the title?

JC: I’ve done some works that are homages to people. So this is an homage [or] worship work dedicated to the sun. Hopefully, obviously the title is slightly tongue in cheek.

The light output of the sun and the rhythm of the light is what created life on this planet. Its location in the sky is secondary.

The rhythms of light that our bodies and cells were designed to work with via evolution are defined by the light cycles of the sun and give us our circadian clocks.

As I wanted to create the simplest clock, outside light level is what I chose to base the work on.

Until the invention of the mechanical clock, time was measured by the rising and setting sun. In this method, sunrise indicated the start of the zero hour, midday was at the end of the sixth hour, and sunset marked the end of the twelfth hour.

Since this technique relied on the movements of the sun, the duration of hours varied by season. For example, during the summer daytime hours were longer than winter daytime hours.

Untitled (for the sun) is part of LACMA’s permanent collection. Stop by the C+M Cafe in the Hammer building to check it out on your next visit.