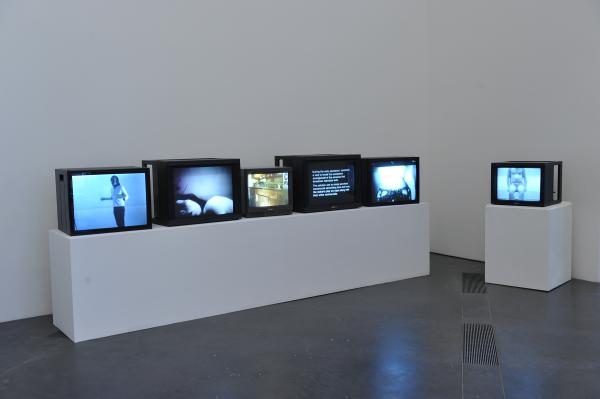 In the early 1970s, artists began to experiment with video as an art form. Fluxus artists Wolf Vostell and Nam June Paik explored its liveness and sculptural potential, with Paik becoming a pioneer in the use of the medium, and his research about global networks of communication foreshadowing the interests of subsequent generations of technologists and artists. Video is now a ubiquitous form of popular expression, widely accessible through online platforms and smartphone apps, but there is little historical consciousness about the impact of artists’ engagement with the medium on all facets of visual and digital culture.

The selection of videos from Electronic Arts Intermix, a media arts organization that emerged in the early 1970s as a resource for artists interested in the then-nascent medium, was created by some of the most significant artists of the twentieth and twenty-first centuries. The videos illustrate the full potential of the medium, in particular its ability to capture historical events, to document performance, to engage with the tropes of broadcast television, to abstract the electronic image, and to deconstruct self-portraiture. This acquisition, generously made possible by the 30th Collectors Committee with additional funding from Steve Tisch, enables LACMA to represent a number of artists currently in the collection in more depth, and to include others who are overdue for representation. Artists included in the selection are Ant Farm, Eleanor Antin, John Baldessari, Dara Birnbaum, Chris Burden, Joan Jonas, Mike Kelley, Bruce Nauman, Tony Oursler, Nam June Paik, Anthony Ramos, Martha Rosler, Carolee Schneemann, Bill Viola, William Wegman, and Hannah Wilke, among others.

LACMA shares its inaugural year with the “birth” of the Sony Portapak, the first portable video unit, but it was not until the 1980s and ’90s that the museum began to collect film and video seriously. We have a strong history of using its curatorial and programmatic resources as an experimental platform for artist research, with the Art and Technology Program (1967–1971) and Art + Technology Lab (2013–present) as chief examples. Acquisitions of important video installations, including Nam June Paik’s Video Flag Z (1986), Bill Viola’s Slowly Turning Narrative (1992), and Mariko Mori’s Miko no Inori (1996) began to address gaps in the collection. More recently, through LACMA’s Art+Film initiative, time-based media has become a major focus with acquisitions of work by Christian Marclay, Pierre Huyghe, Steve McQueen, Tacita Dean, Bruce Nauman, Stan Douglas, and Diana Thater.

Revised scholarly and curatorial framings of Fluxus, Pop art, Land art, Conceptual art, Feminist art, and Performance art include artist videos, while museums that have long collected single-channel videos, such as the Museum of Modern Art, San Francisco Museum of Modern Art, Tate Modern, and the Whitney Museum of American Art, integrate this work into permanent collection exhibitions. This collection of videos rounds out LACMA’s time-based media collecting of the last three decades, and elucidates the critical role that the medium has played in the development of distinct but connected artist practices.