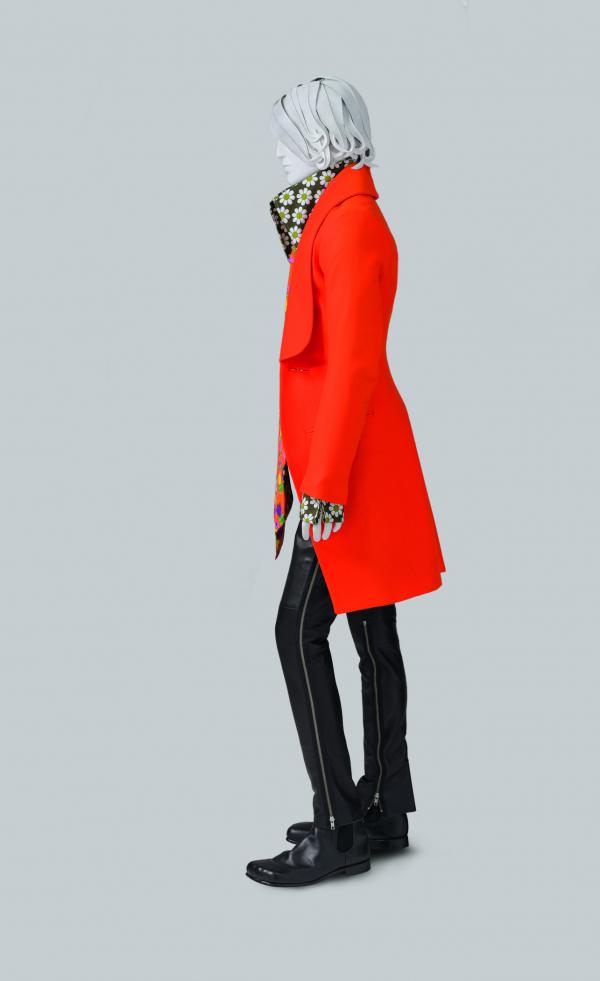 I don’t know when I first noticed Belgian designer Walter Van Beirendonck’s work, but I remember distinctly the first time I was spellbound by one of them—it was in a black-and-white photo in a magazine published in Antwerp in the summer of 2000. I’ve wanted that ensemble for the museum for 15 years; only last year did I realize that the actual outfit was in color! 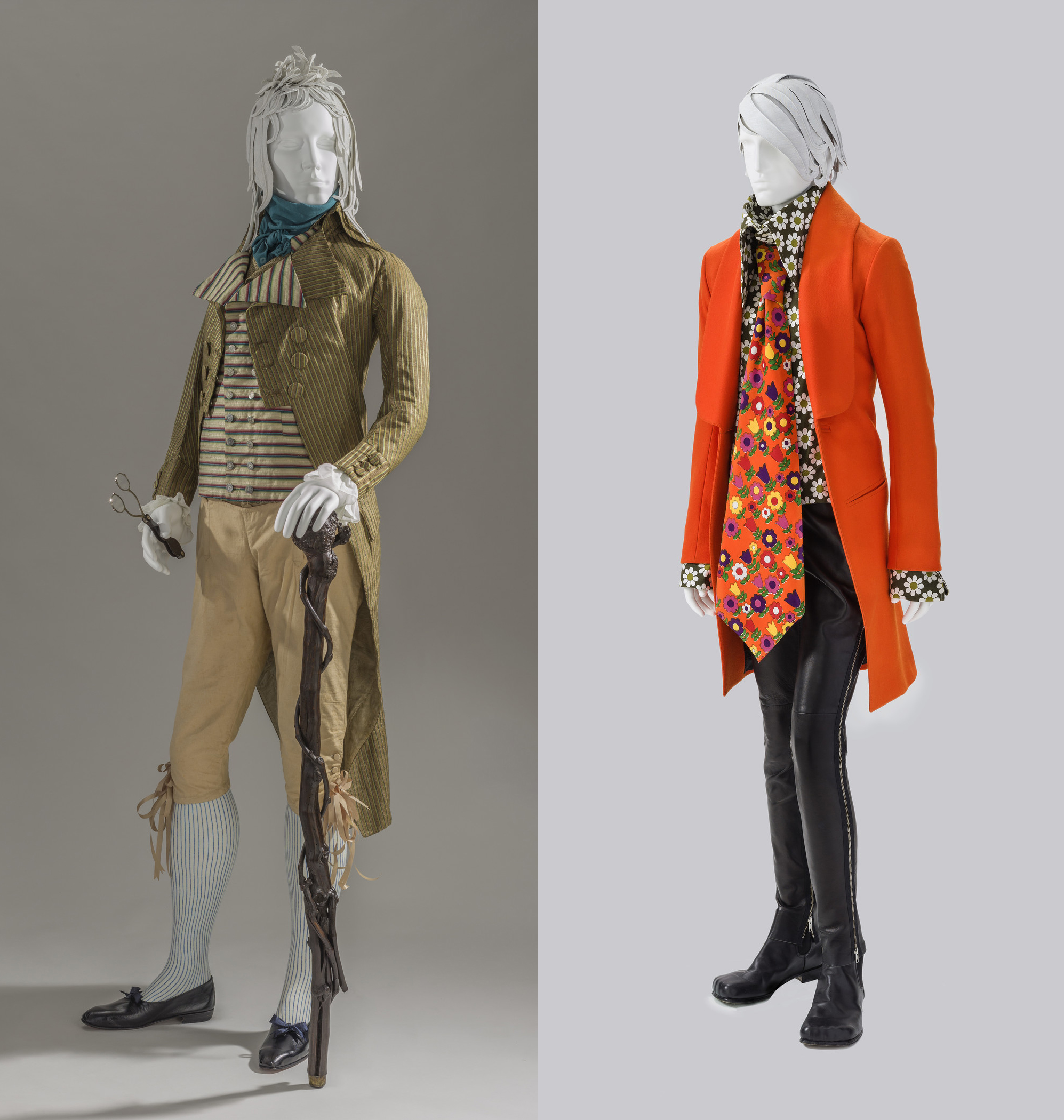 Walter’s oeuvre is a brilliant amalgam of contradictory and complementary opposites, and this look, inspired by a post-French revolutionary incroyable (the “unbelievable” male of the period whose flamboyant attire was considered outrageous) is a perfect example of Walter’s playful, yet studiously serious, commingling of the past and the present.  By creating a superbly reinvented incroyable, he translates the essence of the late-18th-century maverick into a radiant successor—the consummation of the sublime and the ridiculous. 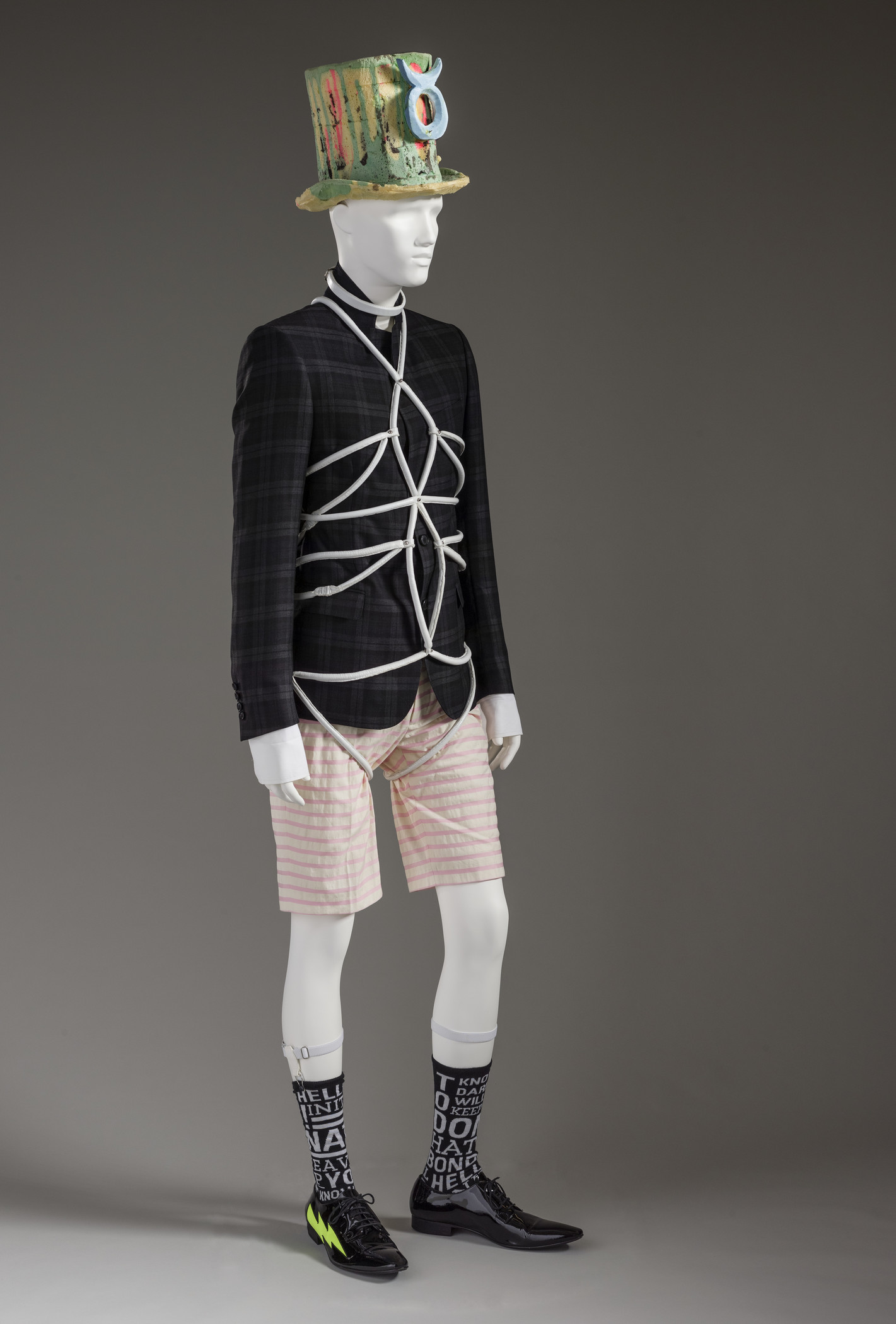 Crucial to his fashion is the interplay of disparate elements, and Walter’s conflation of time periods is similar to the way he neutralizes and scrambles traditional insignia of gender. Although men have worn corsets for centuries, the garment has usually been considered the purview of women; Walter considers the corset a vehicle for body modification, a subject which fascinates him and frequently informs his fashion. The corset, rendered here as more of a body harness, can also be seen as a sculptural object—a cage or a carapace that modifies the human form and alters its nature. Worn over the jacket, the corset’s time-honored secrecy is reversed; the designer likes nothing better than to wrest an icon from its pedestal, expose and investigate it, and thus transform its character. As he does here with a top hat—the traditional mark of the proper gentleman since the early 19th century. Still maintaining its position on top of the head, the hatter’s pride of standard black silk or beaver is instead made of colorful, completely tacky foam—another totem transformed in Walter’s visual vocabulary. 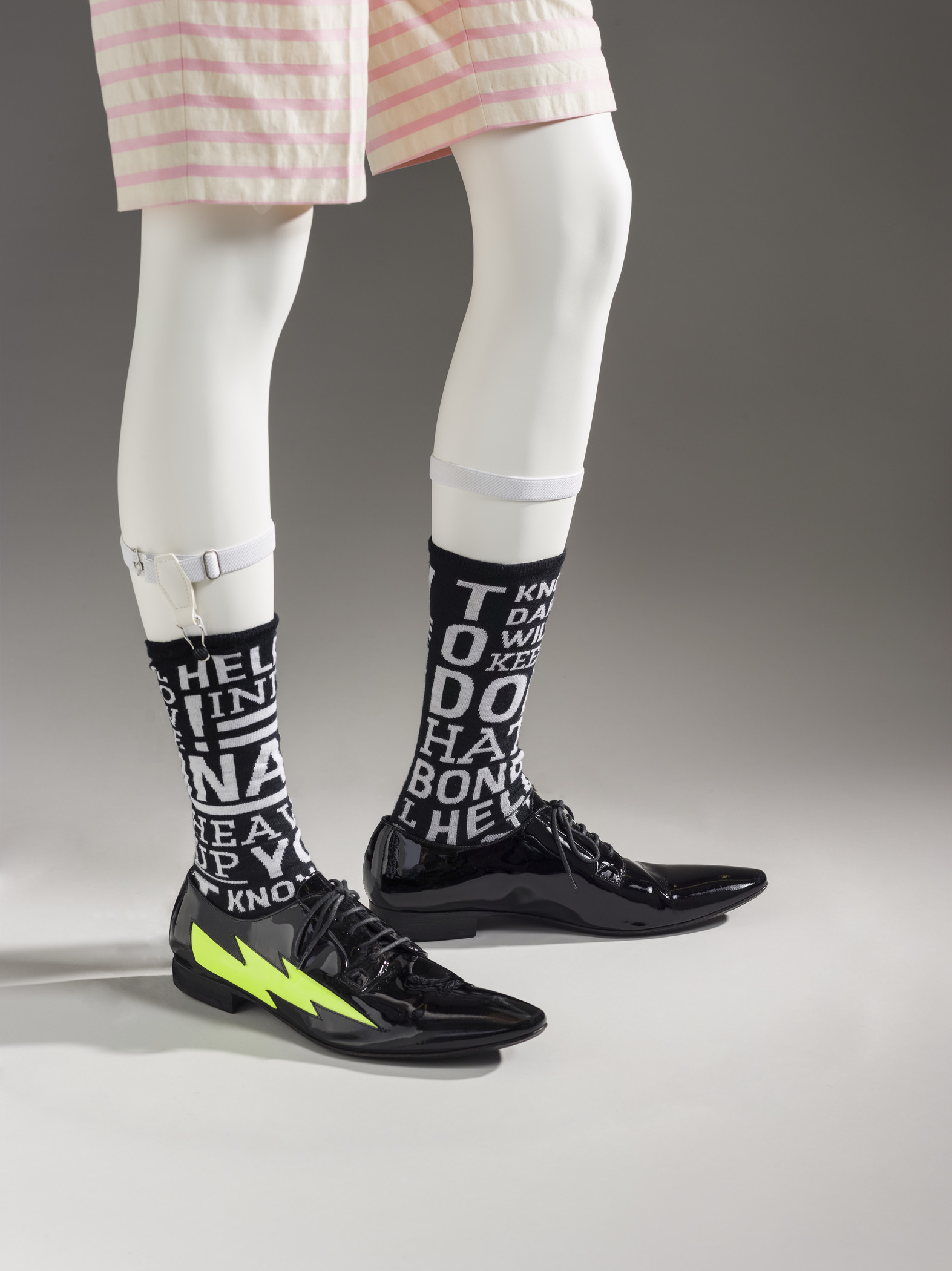 Walter’s work is distinctive in its visual use of language displayed in words, slogans, and phrases that may be related, meaningful, nonsensical, or simply combined in pleasing or displeasing graphic combinations. These socks, mated with garters and normally hidden beneath pants, sport a lattice of words that seem to wrap and confine the leg as do the straps of the harness. The letters speak to the reveal/conceal quality of the ensemble, with an eclectic jigsaw of words including “silence,” “bondage,” “hate,” ‘love,” and “heaven.” 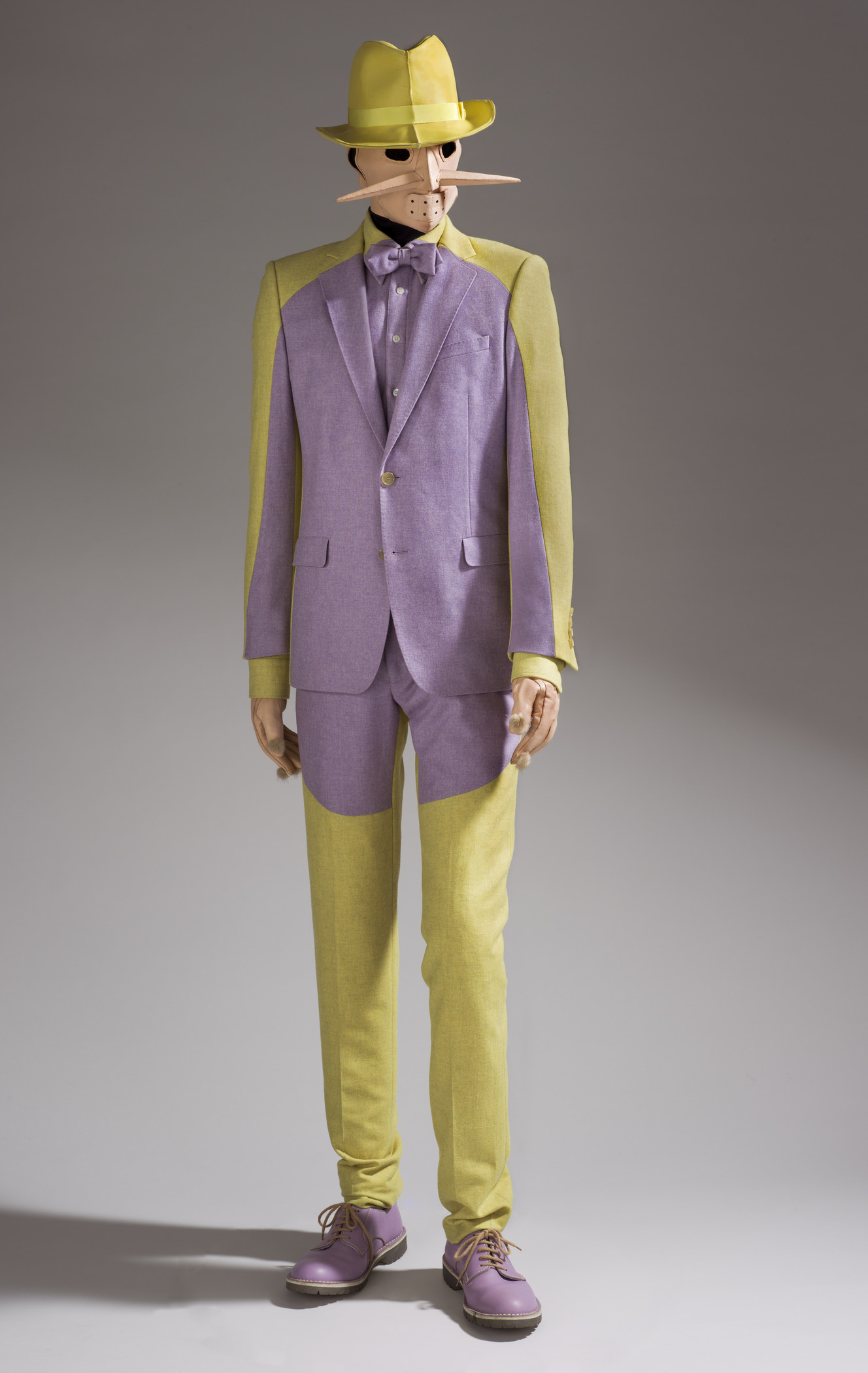 An enormous influence on the designer from the beginning has been the rituals and costume of the world’s various cultures. Masks, scarification symbols, and make-up form a leitmotif in his career’s production, frequently presented in startling juxtapositions with traditional western styles, exhorting the observer to re-look, re-think, and revise established concepts of beauty or decorum. Walter knows that humans need the challenge of thinking like a child without preconceived notions—change is what keeps us young.

Visit Reigning Men: Fashion in Menswear, 1715–2015 to see Walter Van Beirendonck’s work in person! The exhibition is on view through August 21.

1 comment
Rachel Wilson says:
Nice LACMA. Looking forward to next nesting spot for prime reason of proximity to where art thrives. Not that I'm in constant need of inspiration. That can be found just about anywhere. Rather my process requires the right kind. In the spirit of INXS lead singer the late Micheal Hutchence I'm discovering more and more with shares like these artists who are indeed "...one of my kind." I'll be sliding over a bit closer soon:))