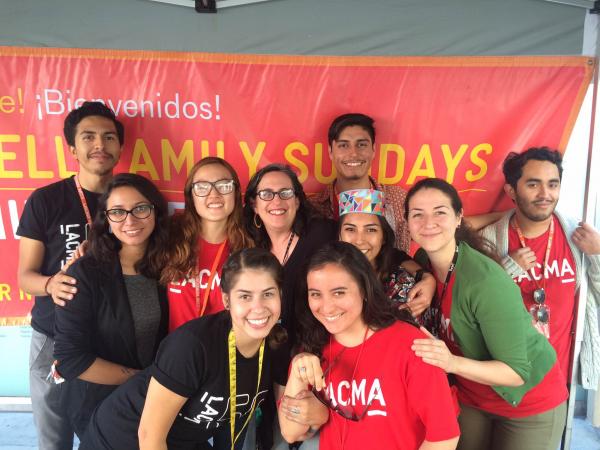 Unframed is taking a look behind the scenes to profile the creative, dedicated people who make LACMA special. We sat down with senior education coordinator Alicia Vogl Saenz to chat about encouraging families to engage with art, leading a meditation session in the galleries, and making up corny jokes. 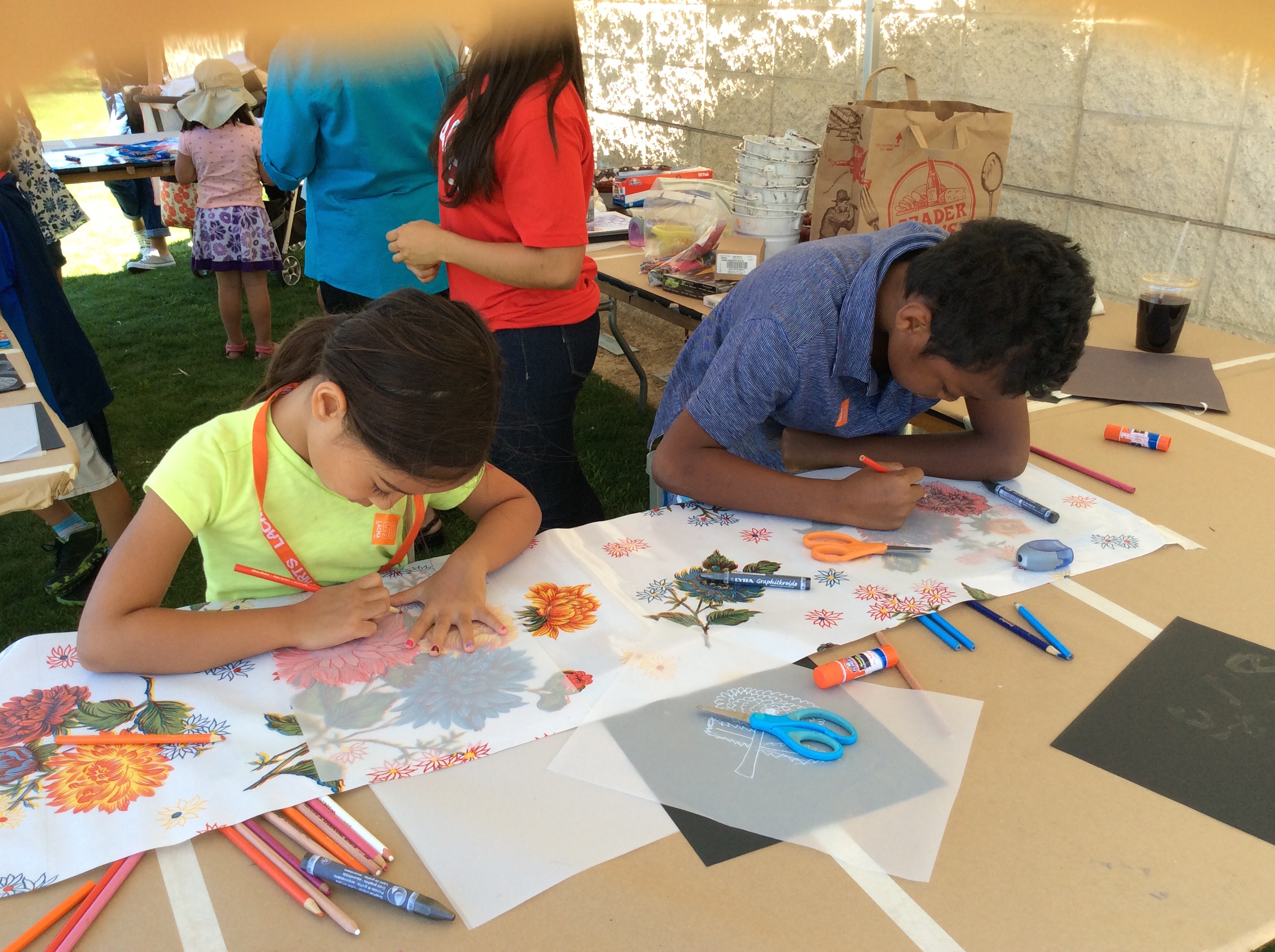 Andell Family Sunday participants making art in response to the exhibition Ed Moses: Drawings from the 1960s and 70s

What do you do at LACMA?

I coordinate family programs. The biggest is Andell Family Sundays, which is a free weekly art-making and art-viewing program for families. I also coordinate Target Free Holiday Mondays and work on Teen Night.

What was your path to LACMA?

I had been working at an arts education nonprofit, focused on serving continuation high school students. I have a side career as a poet, and I got invited to read here. Karen Satzman [director of family programs] was coordinating the event, and we just hit it off. At the end, she asked for my resume, and a year and a half later, she asked if I would consult on a Van Gogh family festival. That was 17 years ago. I came on full-time when Family Sundays became a weekly program in 1999. I have a total emotional commitment to what I do—it’s become more of a vocation than I expected. 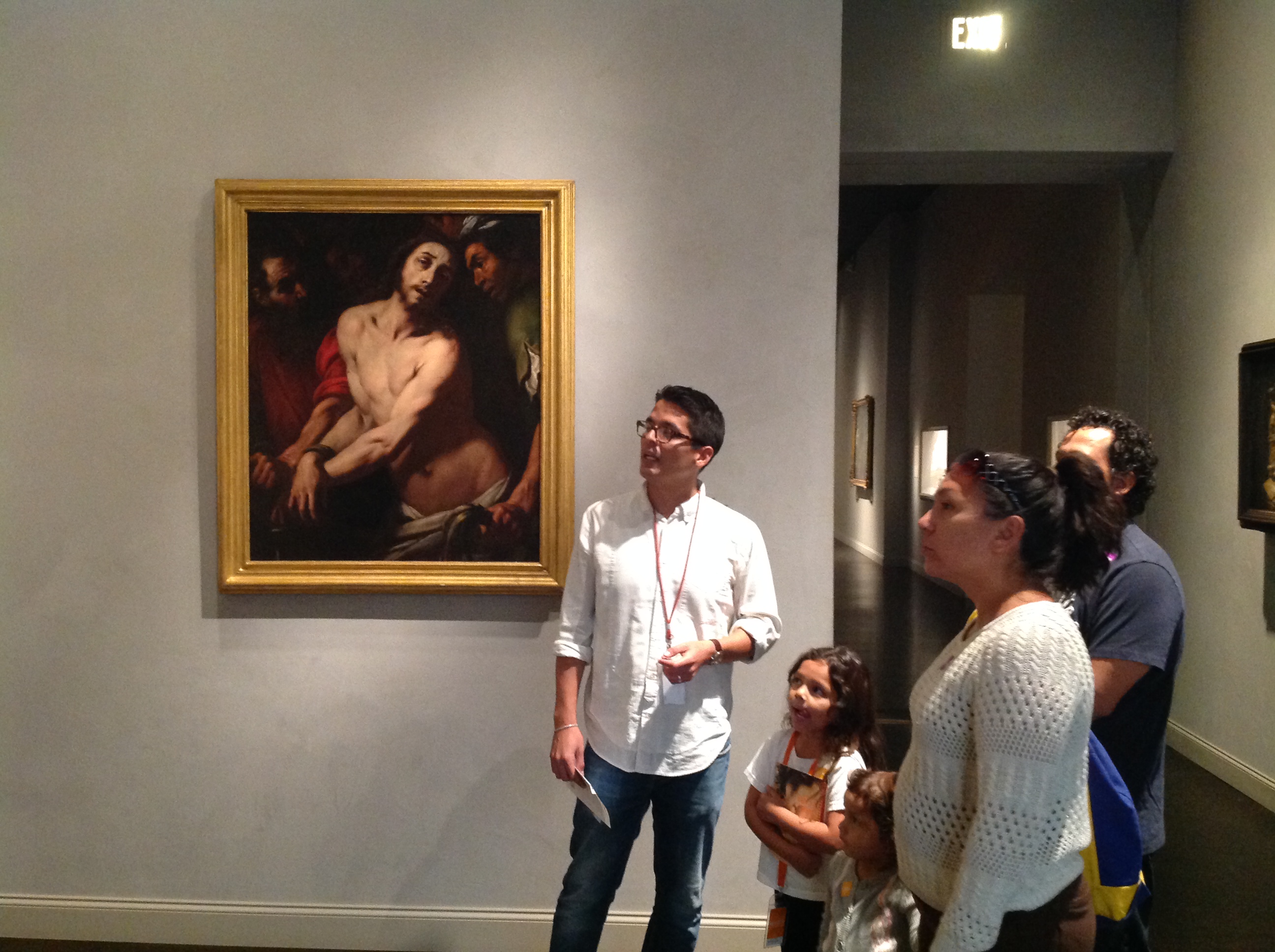 How do you come up with programming ideas?

We look both at the exhibitions that are on view and the permanent collection, looking for themes we think families would enjoy. For example, for Reigning Men, we were looking at portraits of men dressed up. We decided to call the program Fancy Pants. We looked at Portrait of Marten Looten, a portrait of No-Tin (Wind) who was a Chippewa chief, and a portrait of an African American sailor Paul Cuffe. They are each wearing something interesting that give you a clue about the person. For example, No-Tin is painted wearing a pink ostrich plume, peacock feather, and eagle feather in his headdress. He also is wearing a bead choker and face paint. All of it would have been worn for special occasions, and since No-Tin was sitting for this portrait, it makes sense that he would have wanted to look elegant. On the tour, the kids and adults are asked to call out what they see. So much can be learned by just looking and noticing the details.

I think a lot about process and how artists make certain choices. We want to encourage participants to be inspired by how the artists made their art. We also want the parents to be engaged. We model ways for families to be engage on their own. Every Family Sunday has a tour, and the tour guide models how to have a conversation with kids about art.

Is there a Family Sundays event that stands out in your mind?

We worked with choreographer Tony Testa, who is internationally known. We did two incredible performances in the last year. The first one was with the Samurai exhibition. The dancers incorporated an outdoor sculpture by Maria Nordman in their samurai-inspired dance. Later, in collaboration with the music department, we invited them to create a dance in conjunction with Noah Purifoy: Junk Dada. Those two events stand out as activating the space for families—for everyone, really. 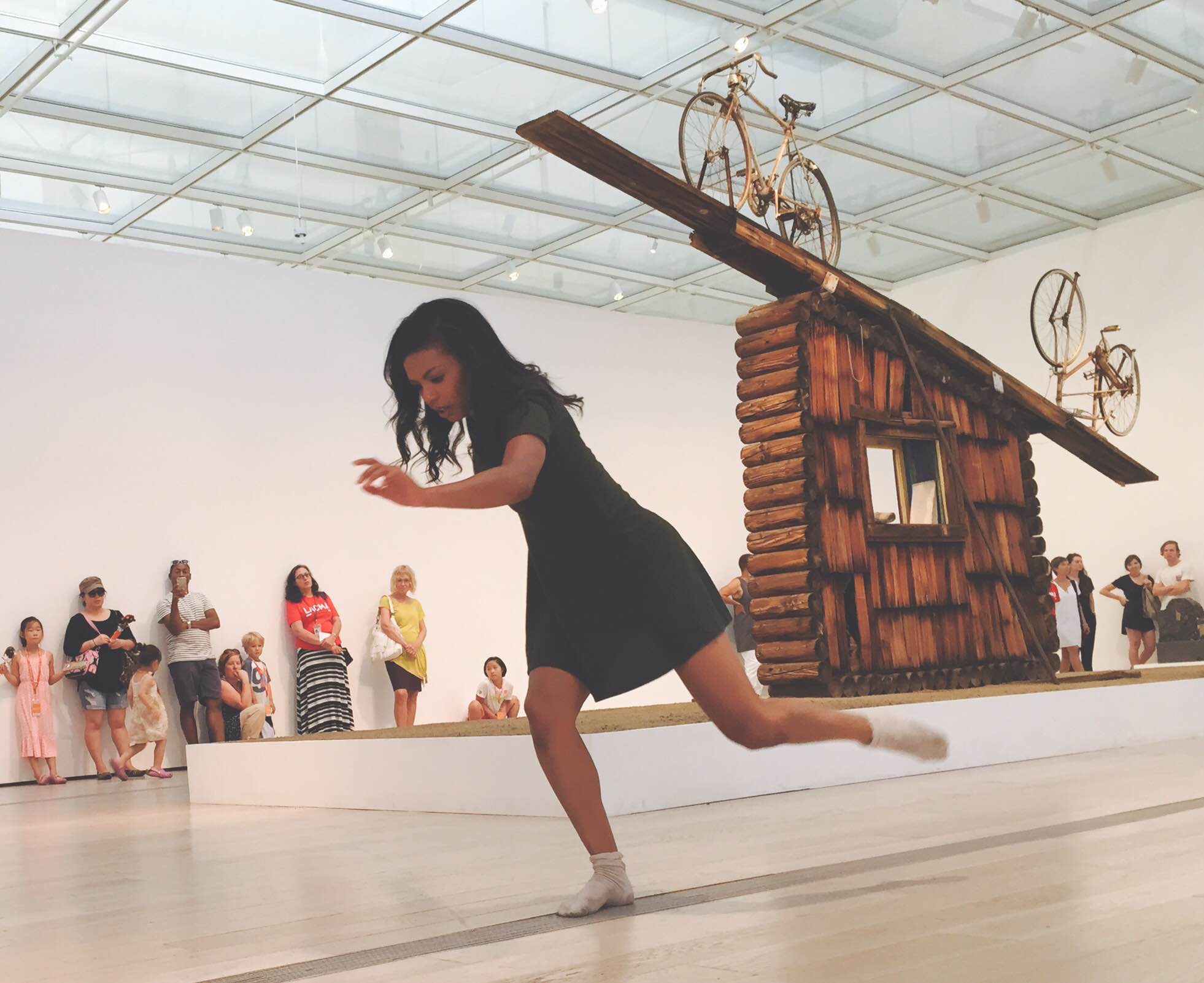 We also had fun with Levitated Mass. We didn’t want to be literal. We didn’t want to do something with rocks. We thought about weight and shape and how you move things; I had a performance artist work with us. The prompts were all about: how does a body feel when it’s heavy? When it’s moving? When it’s not? The participants all started making sculptures with their own bodies. One would do one thing, and someone else would react physically.

You’ve recently started a new program, centered on art and meditation. Can you talk a bit about that?

Another part of my life is that I’m a Shambhala Buddhist. I’ve been practicing for 10 years, and now I’m authorized to teach meditation. I’ve incorporated a little bit of that when I get to do gallery teaching, focusing on mindfulness. Last December, I decided to do an experiment. I was scheduled to do a gallery education program. In the south and southeast Asian art galleries, there is a section that has Buddhas, a whole grouping of them. I thought it would be nice to look at those and meditate. Then I looked at the Facebook event page and there were hundreds of people who said they were coming. When I realized so many people might come in, I decided to do a group activity before we meditate. You can’t have a group discussion with that many people; it won’t be a good experience for anybody. 70 people showed up, and we just managed to fit in the gallery.

People worked in groups to look for the auspicious marks—the attributes that tell you it’s a Buddha you’re looking at, not just some guy sitting there. They looked at three meditating Buddhas, then we had a brief discussion about what they saw, what practitioners would get by looking at the sculptures, and using these artworks as teaching tools. Then we meditated. It was quiet and beautiful.

Because of that success, I’m going to do these classes quarterly.

You mentioned you are a poet. How does working at LACMA inform your approach to your poetry?

I’m very inspired by the collection and exhibitions. It's a huge perk to be able to go in and just look at art when I have a moment. I go up to the galleries and write; I have some poems based on our collection. I fall in love with something and obsess about it. It may not even be something I use for Family Sundays; I’ll end up writing about it.

What is your current favorite artwork?

For a long time, I was crazy in love with the big Sam Francis on view, Toward Disappearance. I found out later that he has a Zen background, so I wonder if I gravitated toward that a little bit. I used it for an Art of Looking, and training with teaching artists and gallery educators. 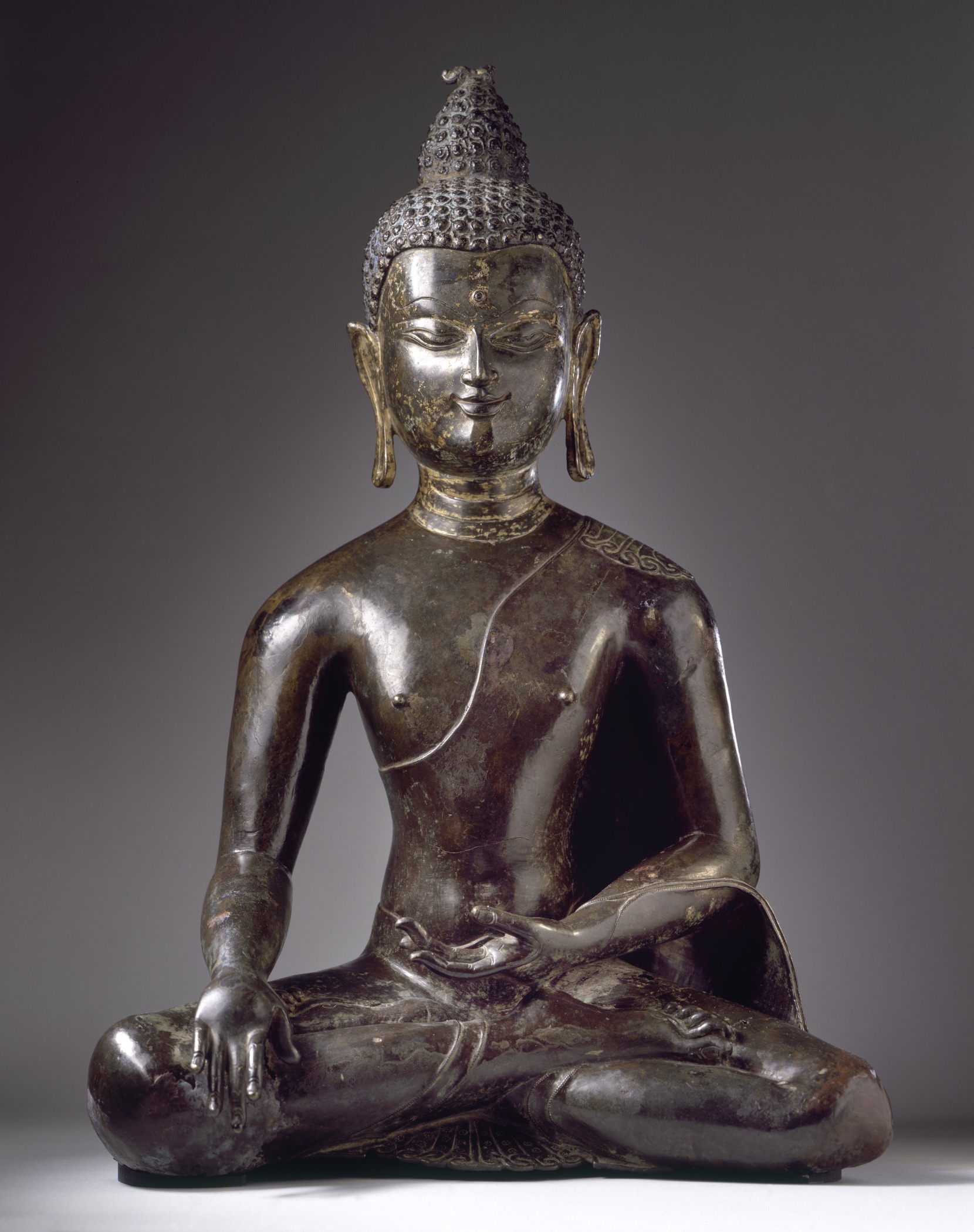 I also gravitate toward South and Southeast Asian art. I have a favorite—a Tibetan Buddha. He is so beautiful; his hands are super delicate, both the meditation and the reaching earth pose, and he’s got this very sweet smile. His robe is incised, and even though he’s wearing something it seems like he’s not wearing anything. At the bottom of his feet there are flowers. In the back—you can’t see it the way it’s displayed, but you used to be able to—you can see the details of the robe. It’s made of metal but it seems like it’s not. The artist was unbelievable.

Do you have a favorite past exhibition?

Anything [the late curator] Virginia [Fields] did—Lords of Creation: The Origins of Sacred Maya Kingship (2005). Another educator, Eduardo Sanchez, and I had this ongoing joke, because there was so much corn in that exhibition. We would put corn in any word we could think of. So we’d say things like, “Hey, that’s corntastic!”

This past year, New Objectivity was something I couldn’t get enough of. Especially with my family history. 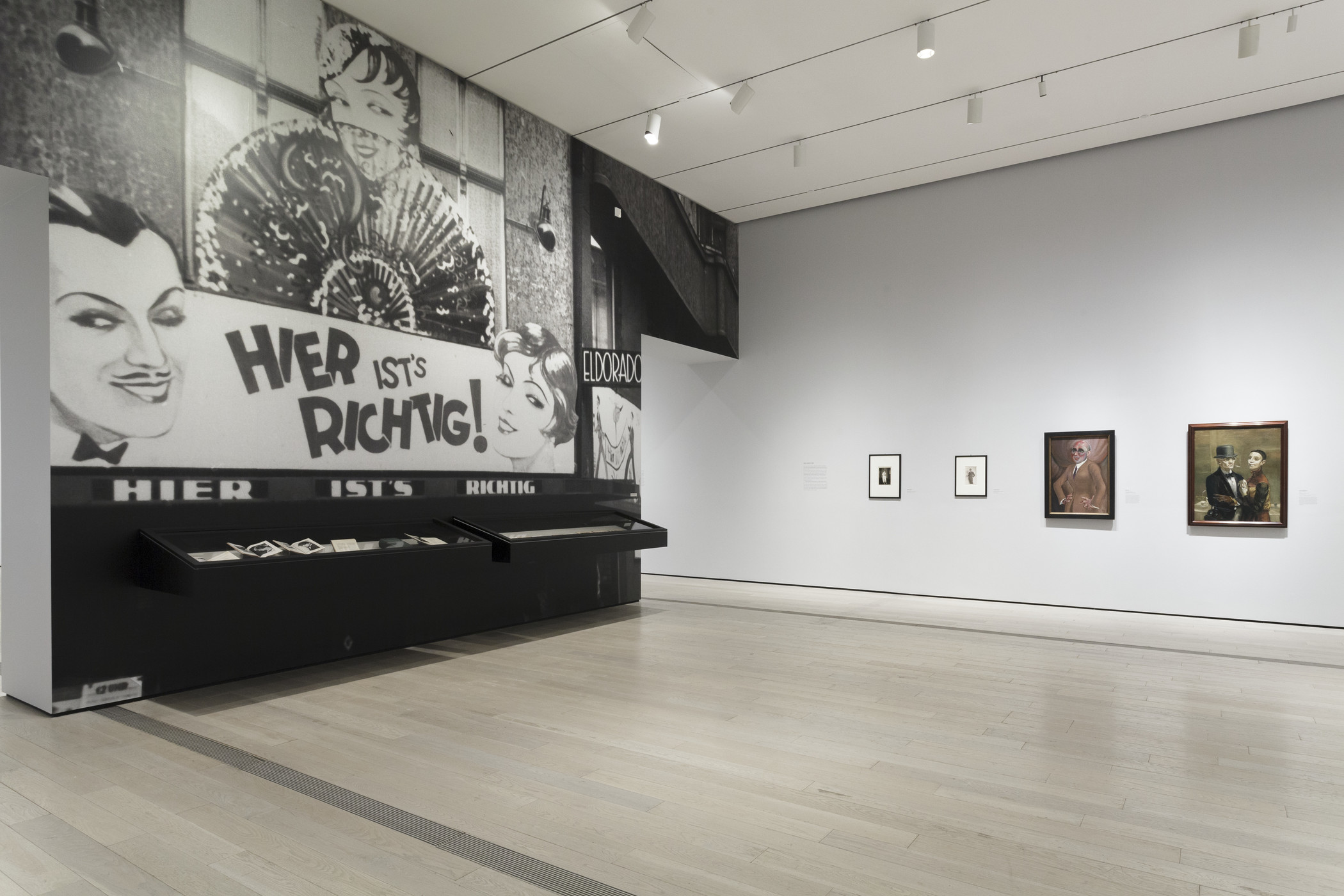 How did your family history affect the way you experienced New Objectivity?

My dad and his family escaped what was called Sudetenland, now part of the Czech Republic. They were German-speaking Jews; well, my dad was half-Jewish. They got out in 1937, right before the Nazis came. They ended up in Ecuador. He was obsessed with World War I and World War II, and the angst of the period between the wars. He was 16 when he left and had very vivid memories of the rise of fascism in Europe. He would get in fistfights with the Brownshirts. The show made me think a lot about that time and how chaotic and confusing it was. And the LGBT history and how things were breaking open just then—a lot of people don’t know that history very well. It made me think about how a society can go either way, and it made me think a lot about now. The show was angsty and beautiful, and the emotional content and the execution of it all was extraordinary. That was an important show.

Last question: what’s the most rewarding part of what you do?

Some families come all the time, and I get to see them grow up. I feel so lucky. I’ve known this one family for a good ten years or so. The mom is interested in her kids getting something they don’t normally get—she’s very education-oriented. They come here from East L.A. on the bus. The first time they came, her eldest was eight; now she's 18. That eldest girl is now off to Wellesley. The mom told us how welcoming we were to her and her family. She said, “We came here to see art, things we could never have imagined. It’s so beautiful here.” That’s really rewarding. I'm interested in creating a culture of care within  staff, so that we are genuinely there to serve the public in a friendly, kind way, so that they can relax and open up. We’re creating a relationship.

The conversation was condensed and edited for clarity. 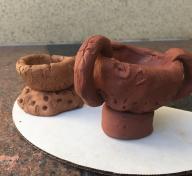