A Scholarly Journey through the Cauca Valley

When I entered as a doctoral student in art history at the University of California Los Angeles (UCLA), I was encouraged to explore the dynamic collections at my fingertips here in the City of Angels. As a student interested in the indigenous arts of the Americas, the Los Angeles County Museum of Art was an obvious choice, as it holds a diverse assemblage of pre-Spanish invasion objects. I arrived in September 2015 in conjunction with the opening of LACMA’s Ancient Colombia: A Journey through the Cauca Valley curated by postdoctoral fellow Julia Burtenshaw. Representing a range of ceramics from various regions of the Cauca Valley in the LACMA collection, the exhibition’s narratives of enigmatic Cauca cultures previously unexplored by art historical scholarship instantly caught my attention. In particular, I kept returning to a group of medium-sized seated statues with geometric painting and carefully placed holes. After a bit of reading and consulting with Julia, I slowly realized how little scholars know about these statues, especially who made them and what purposes they served. 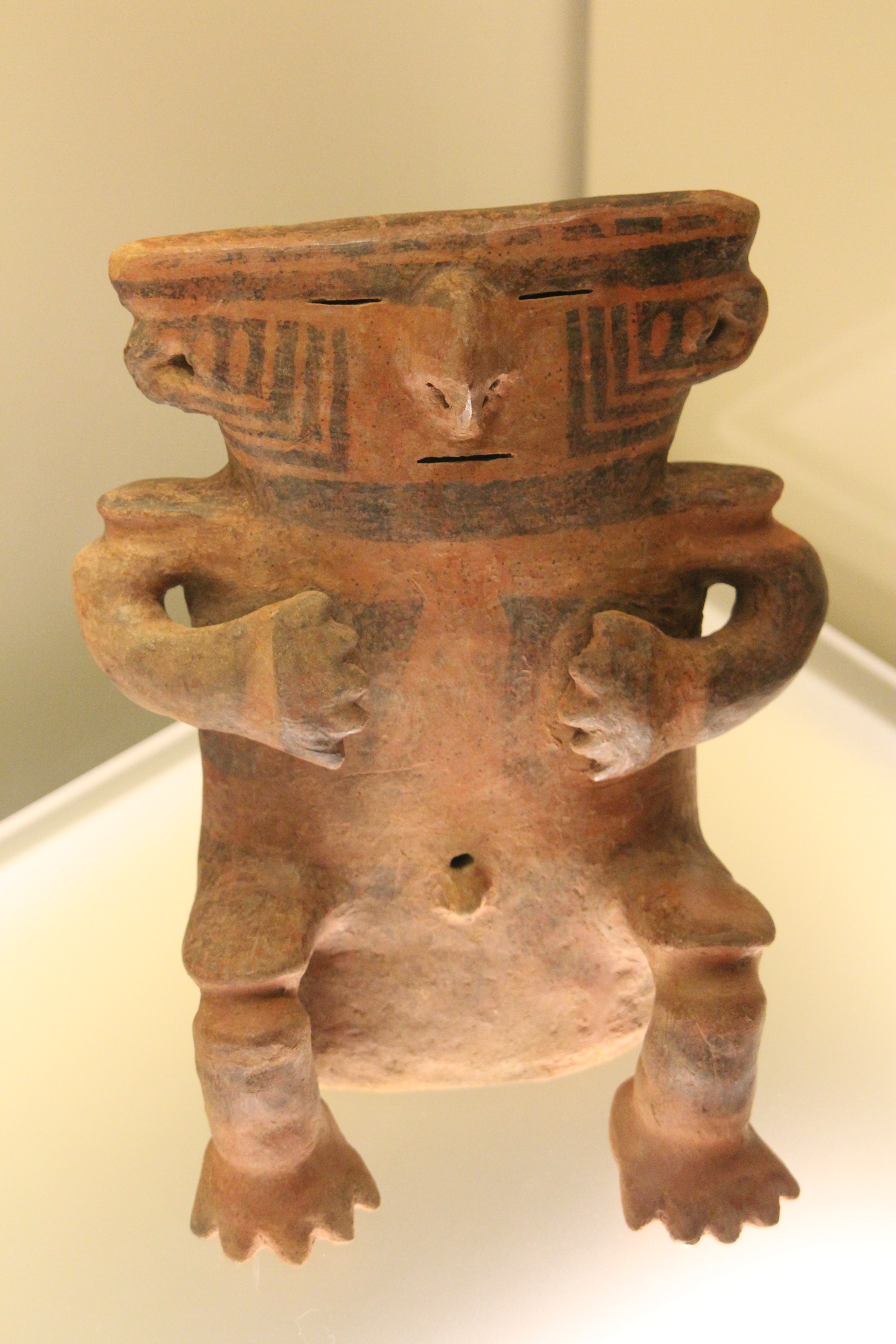 Middle Cauca sculpture from permanent collection at the Museo del Oro, Bogotá. My project was funded in part by the Latin American Institute at UCLA, giving me the opportunity to travel to Colombia for research last summer. Photograph by the author

In the spring of 2016, I decided to pursue the objects as part of my master’s thesis at UCLA. Working closely with members of the Ancient Americas department at LACMA, I attended object viewings, discussed relevant issues with Colombian experts and archaeologists, and continued to investigate the literature that surrounds these statues. Looters, over the past century, procured virtually all of the statues that exist in museum collections today, leaving scholars with no provenience, or contextual information, about the objects. Essentially, my task was to piece together that lost information through material analysis, 16th-century chronicles, archaeological reports, and comparative ethnographies. As I began to finely comb through these methodologies, interesting themes emerged regarding object circulation, bodily representation, and concepts of the afterlife in the Cauca Valley. I was able to show how these objects, traditionally associated with the Quimbaya culture, were not actually produced by the Quimbaya, who had only just arrived to the Cauca Valley before the Spanish. Thus, in institutions other than LACMA, many of the labels that stamp these ceramic sculptures as “Quimbaya” are indeed based on overlooked inaccuracies.

Possible functions of these serenely composed figures were most interesting to probe. To understand the milieu of these objects, I analyzed several ethnographies on groups that were native to the environs of the Cauca Valley, around the time of the statues’ production, to unveil uses. What scholars do know is that these statues come from shaft chamber tombs that plunge deep into the earth. This evidence is largely based on looter reflections and some excavation work completed by Luis Duque-Gomez and Karen Bruhns in the 20th century. Those few instances mention sculptures surrounding the dead, as if they were keeping watch. Through local ethnographies, such as those of the Tukano, scholars can see the importance of a sitting position in representing a chief or in showing a state of stability and wisdom. Several of these sculptures wear fantastical headdresses, often built into the ceramic fabric or possibly created with feathers and gold inserted into the holes that line the forehead.

Middle Cauca sculpture was likely decorated with feathers and gold as envisioned in part of the permanent exhibition at the Museo del Oro, Bogotá. Photograph by the author

These figures likely represent ritual specialists who undergo hallucinogenic transformations. In these experiences, many cultures of the Cauca believe that these individuals are able to cross the cosmological divide between the living and the dead. Upon death, souls are considered to wander, causing harm to their living family members. Ritual specialists negotiate that interaction, protecting the family and ushering the soul beyond the grave.

In the northwest Andes, there is a strong tradition of cultures producing ceramic individuals that present real bodies. According to my research, I argue that these Cauca sculptures operate in a similar manner. I speculate that they are interred with the dead to act as a dual protector: to ensure that the dead pass on safely to the afterlife and to provide the living with protection from wandering lost souls. However, without documentation of these cultures and systematic excavation, scholars cannot draw definitive conclusions on these objects, yet with the sources available, we can offer compelling arguments. Because of the close work with LACMA and the Art of the Ancient Americas department’s willingness to provide me access to the objects in question, I was able to successfully produce and defend this project, which will likely be published as an article in the near future.

Many thanks to Stella Nair, my thesis advisor, and LACMA's Art of the Ancient Americas department—Diana Magaloni, Megan O’Neil, Julia Burtenshaw, Michelle Rich, and Amy Crum—for their infinite help in realizing this project.

Anthony J. Meyer is a PhD student in the Department of Art History at the University of California, Los Angeles, where he specializes in the study of indigenous arts as an Andrew W. Mellon Fellow of Distinction. His current research centers on Imperial Aztec artistic practice and early modern transatlantic exchange, probing the role of indigenous bodies and objects in both Mexica and 16th-/17th-century European spaces.