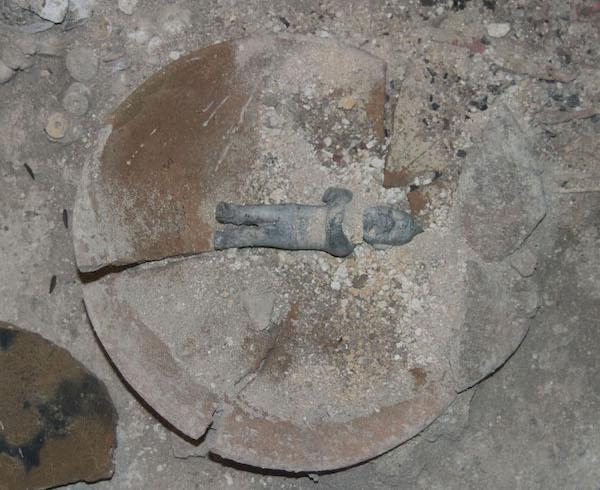 Archaeologists discovered the Olmec-style figurine from Burial 39 at El Perú-Waka', Petén, Guatemala, tucked inside two lip-to-lip vessels (the top vessel inverted over the lower vessel). This image was taken at the moment the upper vessel was removed. Photograph: Michelle Rich

During our excavation of an ancient Maya royal tomb (c. 600–650 CE) at El Perú-Waka', Petén, Guatemala, our attention was captured by the extraordinary narrative scene of 23 ceramic figurines portraying a ritual performance to resurrect a deceased king. This figurine tableau was found at the feet of the ancient Maya ruler interred in Burial 39. It was, however, specifically complemented by a similar object inside a vessel placed above the ruler’s head: a singular figurine crafted of serpentine, a hard jadeite-like greenstone. 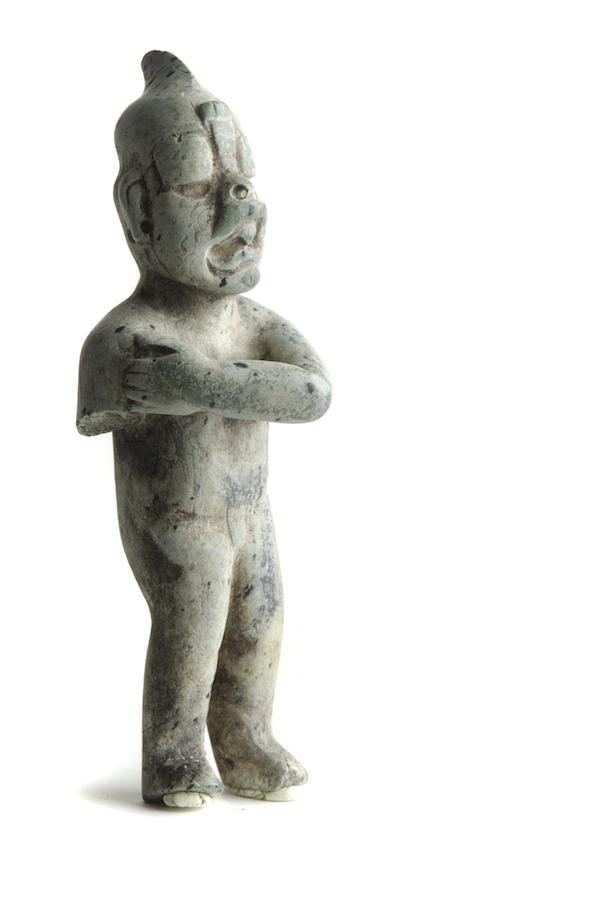 This figurine exhibited a combination of human and animal features alluding to shamanic transformation and the power associated with royal rule (Figure 2). But this is not what makes it remarkable. This figurine is, in fact, Olmec in style—a style characteristic of one of the earliest cultures that we as archaeologists recognize in Mesoamerica. The Olmec culture dates to the Formative Period (c. 1500–400 BCE) and is most prevalent in the Gulf Coast region of modern-day Mexico. The tomb in which this Olmec figurine was discovered is far to the east in Guatemala, and dates to at the very least 1,000 years later, and at the most 2,100 years later! 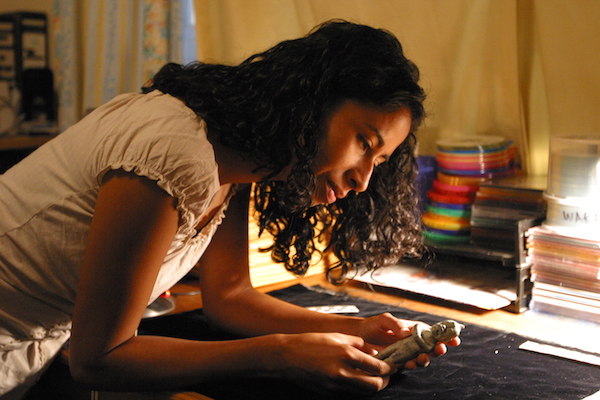 The presence of this figurine in the mortuary assemblage of a ruler from a geographically distinct region who died centuries after the Olmec apogee speaks to the persistence and longevity of Formative-period iconography, or the visual images and symbols used in a work of art. Objects bearing Olmec iconography found in non-Olmec places are known in Mesoamerica, but in a limited fashion. Their ancient archaeological contexts are poorly understood beyond a general region, because they were typically not archaeologically excavated in accord with contemporary standards. For example, the famous Kunz Axe, currently on exhibit at the Getty in the exhibition Golden Kingdoms: Luxury and Legacy in the Ancient Americas was reportedly found in Oaxaca in the 19th century. As such, the scientifically recorded location of the Waka’ Burial 39 Olmec-style figurine makes it distinctive. This, and the fact that it possesses a rich array of iconographic elements—some of which are only observable through very careful examination—ensure a rare opportunity to explore the deeper meaning of such an artifact through visual analysis, or, the art of looking. 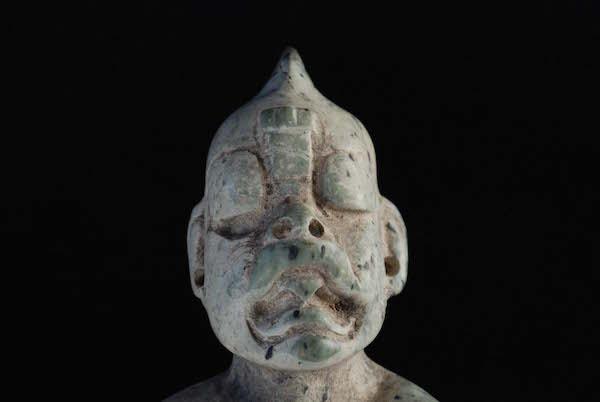 Close-up of the iconographically rich head and face of the Olmec figurine. Photograph: Michelle Rich

The fin on top of the figurine’s head evokes shark or fish imagery. Sharks were deified early in Mesoamerican society, and research highlights linkages between shark or fish motifs, maize imagery, human creation, resurrection, and royal identity. This underscores the complexity of the iconographic message conveyed in this figurine. Additionally, a shark tooth protrudes from the stylized mouth, reminiscent of actual shark teeth recovered at Olmec sites. In the pantheon of Maya gods, parallels can be drawn to God GI of the Palenque Triad, who also possesses a shark tooth. 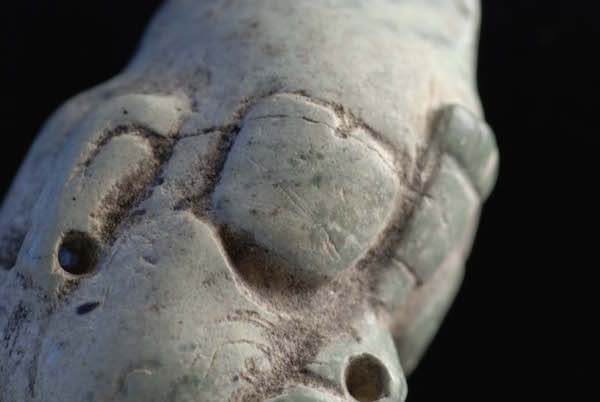 Incising is visible on the figurine. Evident in this image is the crossband motif on the eyelid, a scroll adjacent to the ear, and a double incised line emanating from the nostril and curving down the cheek. Photograph: Erin Sears

On the figure’s forehead we see a complex composition conflating heavy eyelids with an Olmec royal crown of a central trefoil diadem jewel flanked by two celtiform-shaped eyelids. Under raking light, faint incising is evident on the celt eyelids: the left eye depicts traces of almond-shaped eyes and a U-bracket, while the right celt clearly depicts cross-bands. The almond-shaped eyes are prominent in Olmec iconography and are associated with infant maize, and the cross-bands and the U-bracket are elements typically incorporated by the Olmec into avian-serpent sky band imagery. Together these features allude to the maize god and symbolize kingship. Below the celtiform lids, deep crescent-shaped grooves mark the eyes, which may have been originally inlaid with a material such as obsidian or shell. Crescent eyes, for the later Maya, are characteristic of severed heads following decapitation sacrifice. 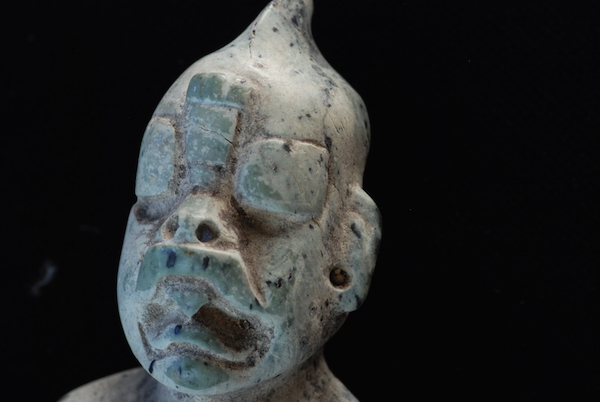 The nasal septum and earlobes are pierced, suggesting the Olmec figurine may have been adorned with jewelry. Photograph: Erin Sears

Like many other Olmec figurines, the septum of the nose and the ears are pierced, although nothing was inserted in these perforations at the time of discovery. Scroll incising associated with the ear looks as though it would have complemented an earflare. Incised double-lines emerge from the nostrils like breath or spirit, curve across the face, and down the neck, chest, and legs. These motifs can also be interpreted as serpentine as well as alluding to cordage, and the connection between cords and snakes in Formative times is well established iconographically. Perhaps most importantly, one of the ways in which to demarcate sacredness is through wrapping or bundling, a ritual act in which cordage is essential.

The figurine’s fleshy legs are reminiscent of a toddler. The right foot is uplifted, a gesture in ancient Mesoamerica that alludes to dancing, an activity often undertaken not merely as entertainment, but one which was deep-seated in ancient Maya social, religious, and political identity, and also linked to creation. Dance was as central to most of the public rituals of the ancient Maya as it is to their modern descendants.

The position of the bent left arm is reminiscent of, although not identical to, postures represented in Middle Formative Olmec imagery depicting items cradled in the crook of the left arm. The position of this arm is also akin to half of a posture of both arms crossed with hands to the shoulders, a pose that later Maya would have read as one of penitence or supplication. 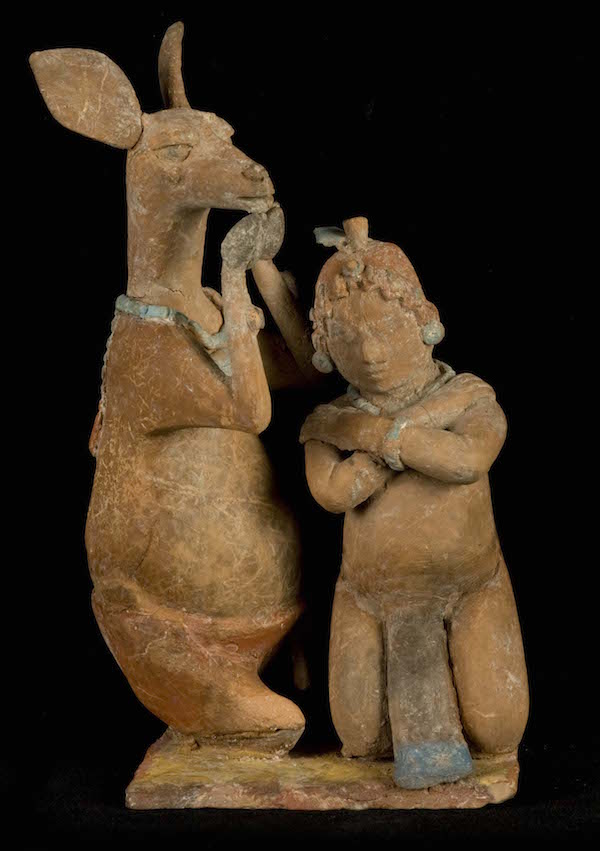 This distinctive pose is depicted in the figurine tableau of Burial 39, where the portly king prepares for the resurrection of his soul by the anthropomorphic deer leaning over him with arms outstretched in the stance of the curer. 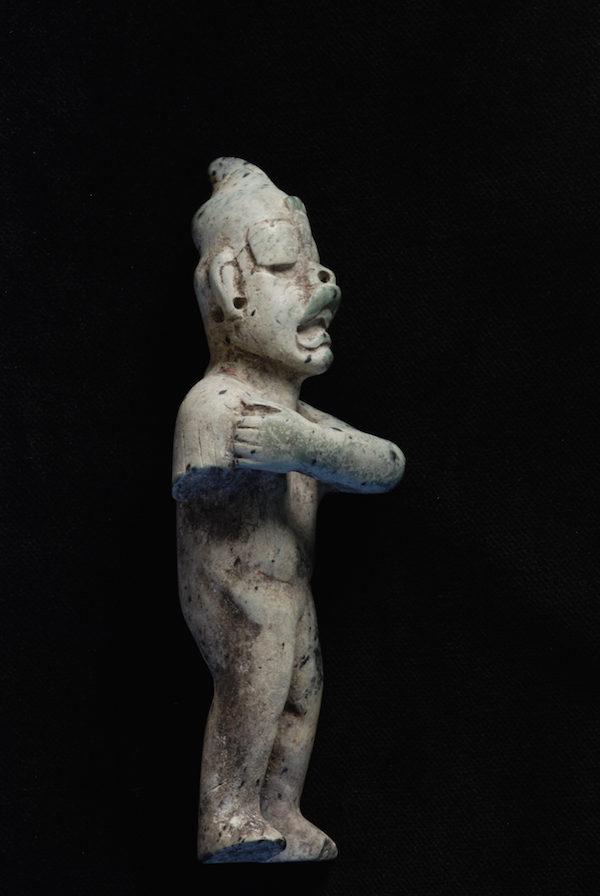 Incised scratches are visible above the break of the arm. I hypothesize that these may have been related to the intentional breakage of the arm. Note the rounded edges at the break. Photograph: Michelle Rich

The figurine’s right arm is missing. Because of the trajectory of the shoulder and upper arm, it is clear it would not have been in a complementary bent position mirroring the left arm, but that it would have been hanging straight down, at least to the elbow joint. Many figurines, including those crafted in the Olmec style, have missing limbs. This may be a practical matter because limbs of figurines break off more easily, but it is possible in certain cases that missing limbs could symbolize offerings, be related to the concept of (auto)sacrifice, or suggest the figurines are representations of mythical or actual beings.  We scoured the tomb for the missing limb, to no avail. Further inspection in the laboratory revealed the break is not fresh, and the surface is rather smooth, suggesting the limb had been absent for some time prior to the figurine’s deposition in Burial 39. 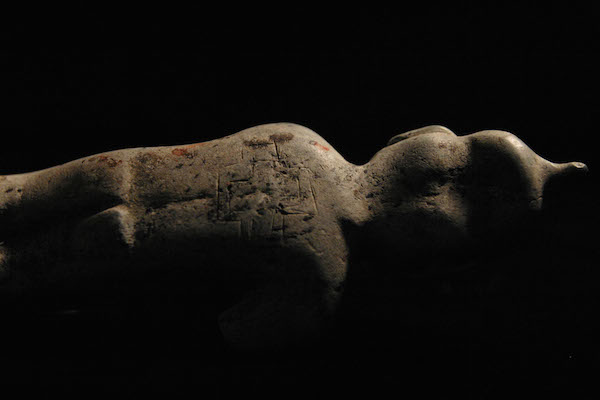 Other instances of incising are present on the figurine. These include three triangular elements faintly scratched on the stomach and a very clear quatrefoil motif on the figurine’s back. The quatrefoil was a symbol recognized by both the Olmec and Maya and establishes the figurine as a portal to the supernatural world of gods and ancestors. In comparison to the other areas of incising, the triangular elements and the quatrefoil motif are rougher and seem less worn, raising the possibility that they might have been added later. Additionally, many nicks and scratches that appear unintentional indicate extensive handling. 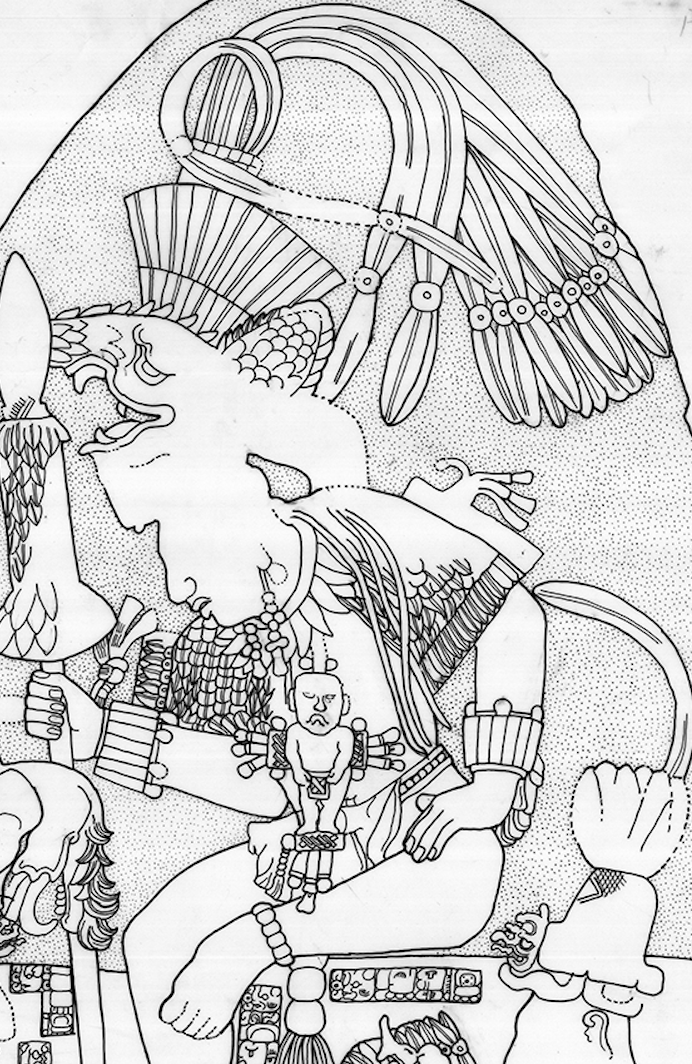 Finally, grooved wear zones near the hips and around the neck suggest the figurine may have been tied with something, attached to something, or positioned such that wear and repeated use would become evident. In thinking about the function of the figurine in relation to this use-wear pattern, Stela 12 of Piedras Negras provides an analogy of a figurine used as a pendant hanging around the neck of an individual. 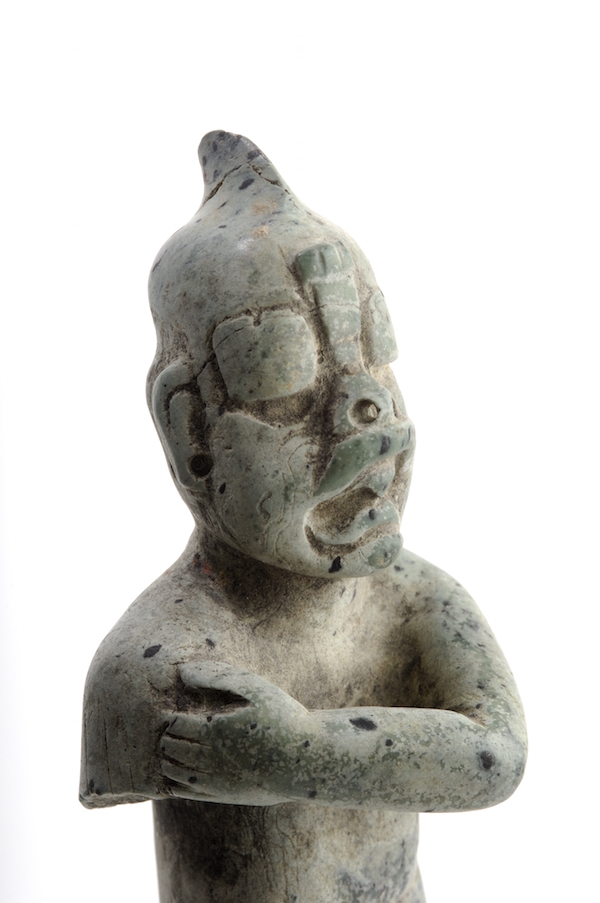 The double line emanating from the nose is visible down the face, neck, and torso of the figurine, which represents a dancing boy wearing a deity mask. Photograph: Kenneth Garrett

Our assessment of the figurine is that it depicts a dancing boy wearing a deity mask and shark-fin headdress, engaged in the process of ritual and shamanic transformation. The mask alludes to the watery underworld, the shark-like Water Monster, and to the severed head of the sacrificed maize god. The boy may have cradled a perishable bundle in his left arm, possibly a maize fetish, which is a bundle well-known in Olmec iconography. He is dancing as reborn maize, and we propose the Maya understood this figurine to be symbolic of royal power as well as resurrection—much like the narrative scene at the opposite end of Burial 39. 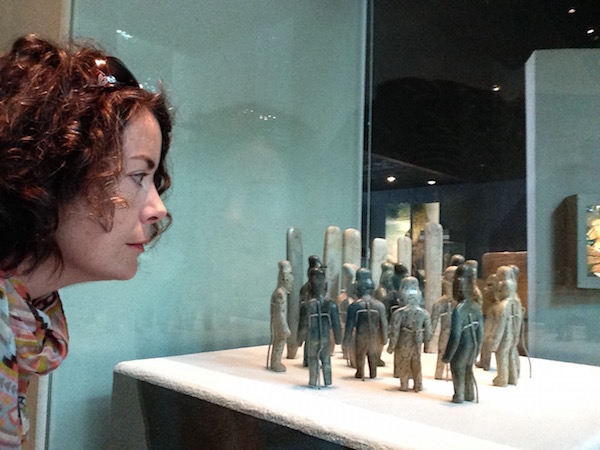 If you would like to know more about Waka’ Burial 39, join us at LACMA for a discussion on January 14, 2018 titled “Excavating, Restoring, and Exhibiting Figurines: Reflections on the Ancient Maya Resurrection Scene from El Perú-Waka', Guatemala.” Examine the Olmec figurine yourself by visiting Ancient Bodies at LACMA. Curious about the Mesoamerican Formative period? The Riverside Art Museum is hosting a conference on February 3, 2018 called the Rise of Civilization in Mesoamerica in conjunction with the exhibition Uncovering Ancient Mexico: The Mystery of Tlatilco.

Michelle Rich is the curator of Ancient Bodies: Archaeological Perspectives on Mesoamerican Figurines, on view through February 4, 2018, and is the former Mellon Postdoctoral Curatorial Fellow in the Department of the Art of the Ancient Americas at LACMA.