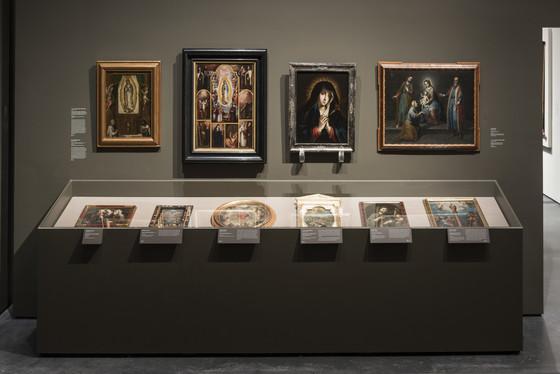 Upon entering Painted in Mexico, 1700–1790: Pinxit Mexici, one is immediately struck by the scale and magnitude of many of the works on view. Paintings towering up to almost 14 feet tall inspire awe and create drama. Yet a group of small devotional paintings in the final section titled “Imagining the Sacred” evokes a similar type of wonder, but this time meant to elicit contemplation on a personal level. Pious individuals commissioned these works, in many cases calling on the best painters of the day. 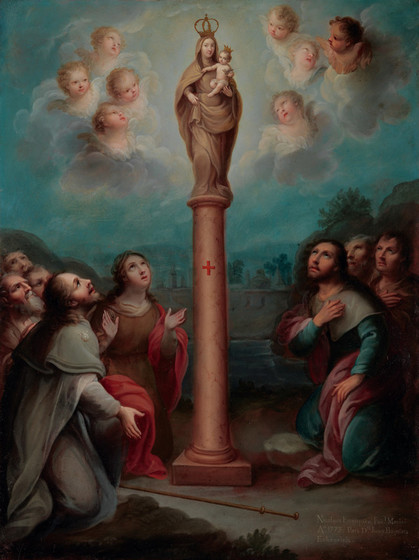 In some instances, the paintings themselves tell us about the individuals who commissioned them. Following his signature on this delicate painting above, the artist Nicolás Enríquez (1704–c. 1790) instructs us that work was created for Don Juan Bautista Echeverría.

Born in Spain, Juan Bautista de Echeverría y Latadi (1744–1816) traveled to Mexico at age 13 to apprentice with his uncle, an official of the royal treasury. He eventually became a successful merchant and commissioned a set of five paintings for private worship. This one depicts the miraculous apparition of the Virgin Mary to Saint James on the banks of the Ebro River near the city of Zaragoza, Spain, a reference to Echeverría’s home country.

The incandescent turquoise sky and the seamless application of paint owe their brilliance to the technique of painting with oil on a copper support. This mode of working emerged in Europe in the early 1500s and by the end of the century it had appeared in Spanish America. Thanks to their jewel-like quality and exquisite level of detail as well as the proximity to active copper mines, paintings on copper flourished in 18th-century Mexico. While many Mexican artists created at least a few works on copper, Enríquez was among the most prolific in this medium, creating some of the larger extant examples, several of which are now in LACMA’s permanent collection. 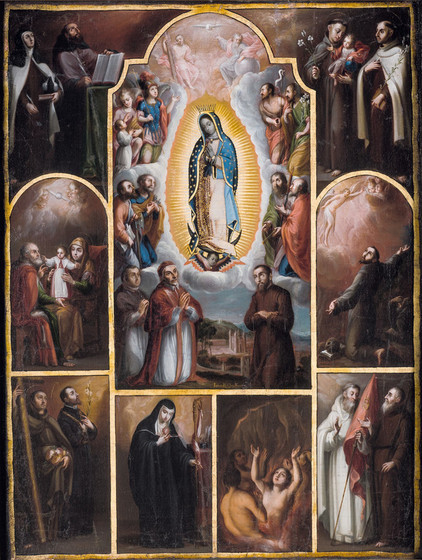 One of the most recognizable devotions to audiences today is the Virgin of Guadalupe, who inspired numerous variants in the 18th century. In this painting by Juan Rodríguez Juárez (1675–1728) the Virgin appears in the central frame, flanked on the left by a kneeling bishop and Pope Innocent XI (r. 1676–89) and on the right by Gregorio López (1542–1596). Born in Spain, the hermit López immigrated to Mexico in 1562 and in the early 18th century was the subject of a beatification campaign. The original owner of the painting likely commissioned the picture to show his endorsement of López’s cult, as well as that of other saints and Mexico’s famous Virgin of Guadalupe, who presides over them. 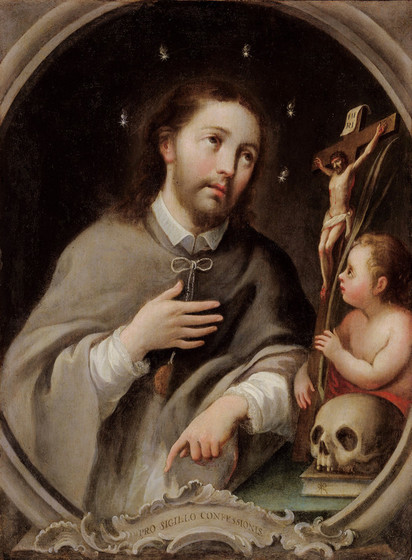 Though lesser known today, Saint John of Nepomuk was another popular devotional figure of the time. Canonized in 1720, this 14th-century priest from Prague became one of the most revered figures in 18th-century Mexico. Serving as the queen of Bohemia’s confessor, Nepomuk refused to tell the king her secrets. In response, the jealous king ordered the priest to be drowned. Five flames—symbolized by the five stars around his head—led the way to his discovery and burial. Before his canonization, the saint was exhumed, at which point his tongue—which the saint wears around his neck—was said to be intact and still full of life. Painted 50 years after the saint’s canonization and three years after the expulsion of the Jesuits from Mexico in 1767 by King Charles III, Saint John of Nepomuk came to symbolize the moral integrity of the persecuted church. 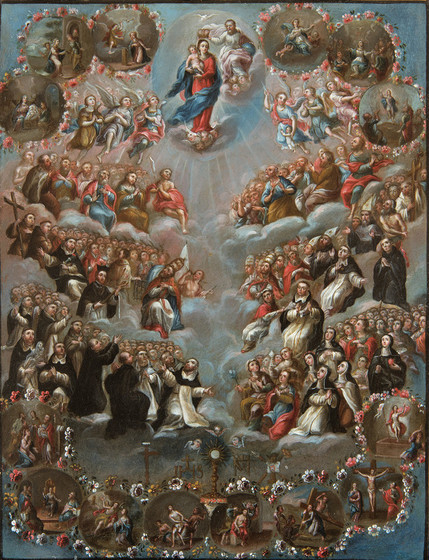 Saint John of Nepomuk appears as well among the 258 saints in this oil-on-copper painting by an unknown artist. Measuring just 11 inches tall, Queen of Heaven and Saints is one of the smallest yet also most visually dense paintings in the show. Along with the assembly of saints, the diminutive painting includes 14 roundels that depict scenes of joy and sorrow. In the composition’s focal point, God the Father crowns the Virgin of the Rosary. The detail and precision paid to this private and individual work recall more monumental works that would have adorned the sacristies and other spaces of many churches across Mexico.

Don’t miss your chance to see the magnificent paintings—large and small—of 18th-century Mexico, on view at LACMA until March 18!