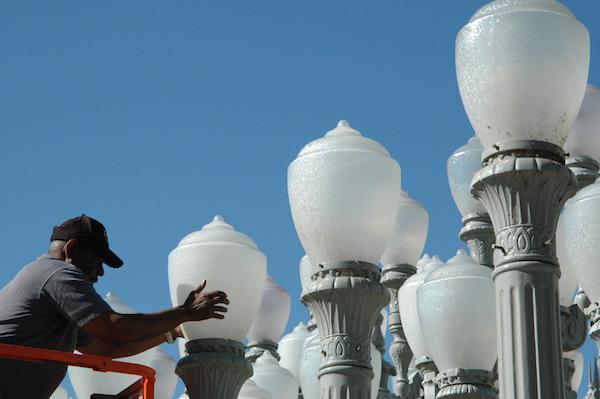 Out of the Dark Ages and Into the 21st Century: Finding LED Bulbs for “Urban Light”

Four years ago, LACMA was already making efforts to be a more environmentally sustainable museum when we initiated a conservation research project to retrofit the lamps in Chris Burden’s Urban Light with energy-efficient bulbs. At the time, 309 high-wattage, energy-hogging incandescent bulbs lit up the iconic sculpture. Time was running out for these soon-to-be obsolete bulbs, given that California had enacted rules to phase out them out. The new regulations encouraged manufacturers to stop making them and consumers—including museums—to switch to newer, more efficient light technologies. LACMA Conservation Center’s research staff (Drs. Charlotte Eng, Terry Schaeffer, and the late Frank Preusser) undertook the task of choosing among several newer options. Many factors had to be considered—including brightness (lumens), aesthetics including color temperature (kelvins), and energy consumption (watts)—when considering the new products that came on the market. 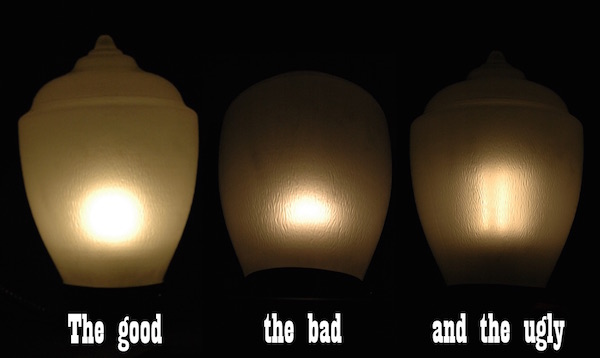 When we started, we could not find any replacement bulbs that were suitable. The bulbs that were tested came in three “flavors”: induction light sources, compact fluorescent light (CFL) bulbs, and light-emitting diode (LED) lamps. After much consideration, we ruled out the first two categories because they didn't come in the right color temperature (most had a green or blue cast), but, more importantly, because they contain mercury—for these bulbs, the trade-off for energy efficiency is the generation of hazardous environmental waste. This left us with LEDs. We were overwhelmed with the variety to choose from, and began to apply our strict criteria. In-house testing of numerous LED bulbs was performed with the help of Roosevelt Simpson, LACMA’s amazing electrician. We began to feel like Goldilocks—some lights were too bright, some were too blue, some were too oddly shaped. Frustratingly, we were not completely satisfied with any of them. 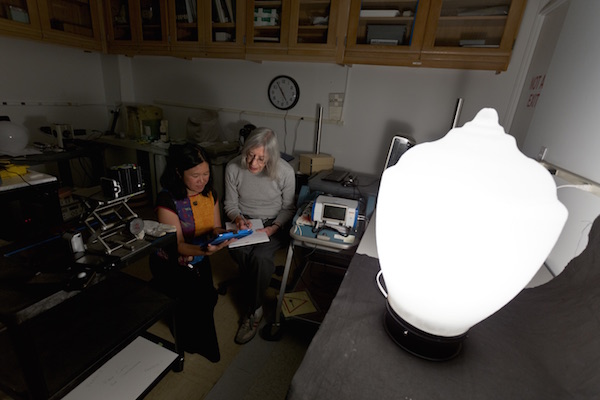 We then decided that instead of testing retail bulbs, we would concentrate on finding manufacturers that were willing to customize bulbs to meet our requirements. When we contacted large, well-established manufacturers, we found that they were unable to collaborate with us. LACMA would not be ordering enough bulbs to make it worth their while to change their complicated fabrication workflow. Luckily, in the summer of 2016, the Mayor’s sustainability office sent us contact information for a company that was “just right” for us.

The hard work began with our providing the company with a detailed description of all the specification and the aesthetic requirements for the three different types of bulbs needed for Burden’s installation. We needed bulbs that worked outdoors, but in enclosed glass globes, with omni-directional light and a uniform warm glow (2,700 Kelvins color temperature) and conspicuous (but effective) heat sinks that wouldn’t alter the spherical shape we need to replicate the round light profile of the incandescent bulb. After lengthy discussions, more than a hundred follow-up emails, measurements of the light output of dozens of test bulbs, photography to document appearances, and test installation of the most promising bulbs in some posts toward the back of the sculpture, we were at last successful! We finally had special customized LED bulbs that met our technical and appearance criteria that would give us substantial energy savings. 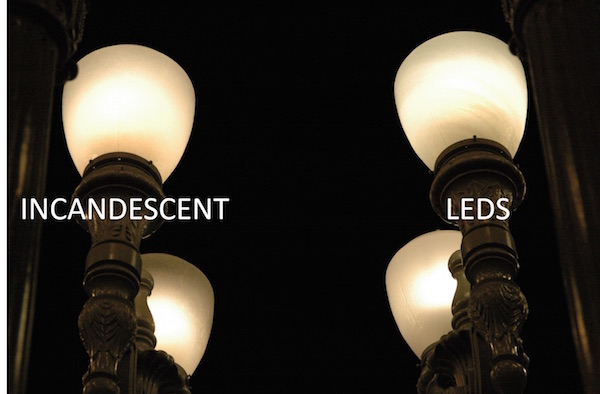 With the help of the Leonardo DiCaprio Foundation, we were able to purchase these custom LED bulbs and have professional street lighting installers replace all the incandescent bulbs with their LED counterparts. Unlike incandescent bulbs that burn out in a year or two, we won’t need to replace these bulbs for about a decade, maybe more! Incredibly, with this retrofit project, LACMA is able to save a whopping 91% on the Urban Light energy bill. Starting this year, for the cost of a lunch at the food trucks, LACMA can keep the lights on in Urban Light all night long! This made us think of how much we as consumers can save at home. Have you made the switch yet?

Thanks to the support of the Leonardo DiCaprio Foundation in 2018, all 309 incandescent light bulbs were converted to LEDs, reducing the installation’s annual energy consumption by an estimated 90 percent, while also reducing emissions of greenhouse gases and other harmful pollutants.