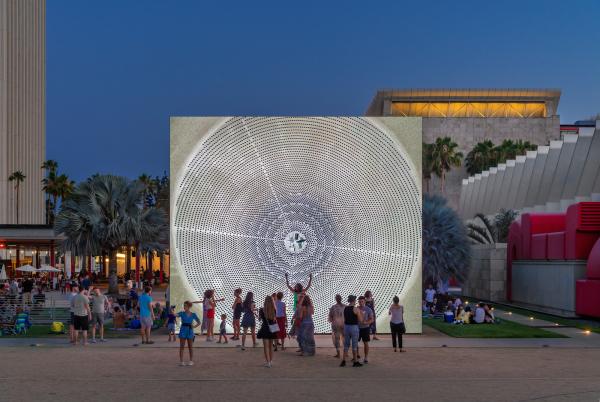 The Virtual World of John Gerrard

Displayed on a monumental, artist-designed frameless LED wall, Solar Reserve simulates an actual solar thermal power plant located in the remote desert of southwest Nevada. This virtual world renders in real time, rotating on the earth’s axis through 24 hours of night and day. A painstakingly accurate re-creation of real-world infrastructure and the surrounding landscape, Solar Reserve is a digital portrait brought to life through a gaming engine. Essentially, as an executable file, Solar Reserve is a virtual game—a set of instructions with 10,000 lines of code that results in 60 images per second. LACMA visitors will get to enjoy two months of the yearlong simulation.

As soon as outdoor construction began on the installation’s structural scaffolding and LED wall, museum visitors were instantly drawn to the monolith and approached to inquire about both the subject and the nature of the work. “Is it a film?” “Is it a satellite feed?” “Where is the projection?” As a culture raised on cinema—and living in a city that concretized the cinematic dream—we readily expect a known duration, a structured narrative with a beginning and an end. And though so much of contemporary cultural production integrates software and synthetic mediums, digital simulation has been historically absent in the museum.

Fundamentally, simulation goes beyond cinema. Director Andrei Tarkovsky described the process of filmmaking as “sculpting in time.” Artist John Gerrard could be considered to sculpt in code. Drawing on the art historical antecedents of conceptualism, portraiture, performance, and Land Art, Gerrard’s works utilize the medium of commercial gaming to create computational portraits of actual sites. Though Solar Reserve may look like a film, there is no camera or lens-based record. It is a three-dimensional model of a real place remade as a real-time virtual world.

Thus, Solar Reserve uses algorithmically generated data to create an oneiric universe, producing a rhythmic and ever-changing image that is at once beautiful and hauntingly enigmatic. In bringing the public toward a new understanding of the moving image, there is no better place to present Solar Reserve than in Los Angeles.

John Gerrard: Solar Reserve is on view July 12–September 3, 2018 on the Resnick Lawn.