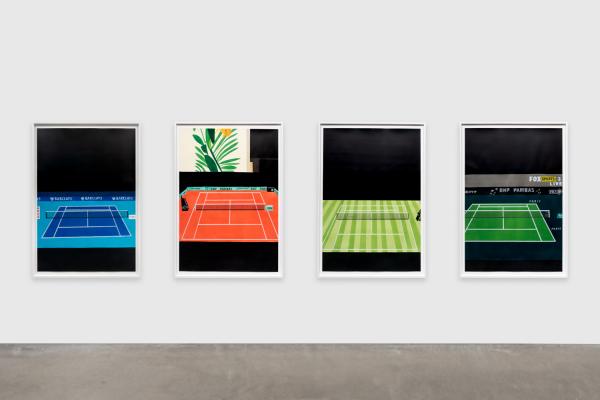 LACMA recently received a promised gift of Jonas Wood's Tennis Court Drawings, a single work composed of 24 acrylic, ink, and colored pencil drawings depicting the courts of various tennis tournaments as viewed by the artist while watching the matches on television in his studio. They are divided into six “sets” of four drawings: four sets depict each of the courts from the “Four Majors” or Grand Slam tournaments (the Australian Open, French Open, Wimbledon, and US Open) and two sets depict “Four Courts” which also include the Barclay’s World Finals (London), the World Tennis Championships (Abu Dhabi), and the Paris Masters.

The vertical orientation alludes to portraiture and, indeed, the intense red of the red brick dust at Roland-Garros and the blue Plexicushion acrylic at Melbourne Park are identifiable characteristics of specific courts. Devoid of human presence (players or crowds) and framed top and bottom with fields of deep black, the courts take on an abstract quality reminiscent of postwar color field painting. In some instances, however, cropped images of the artist’s other work appear, reminding the viewer of the frame of reference: an iPhone photograph of the TV set in the artist’s studio.

Tennis Court Drawings is a major work by the artist, who is represented in LACMA's collection by two works on paper and 16 prints. The donors, Mr. Masahiro Maki and Mrs. Yoshimi Maki, will exhibit the entire work in Tokyo on the occasion of the 2020 Summer Olympics in a newly designed private museum before gifting the work to LACMA by 2025. Rachel Cole and Chelsea Petronko of Vernissage Art Advisory assisted in facilitating the acquisition.

Wood (b. 1977, Boston) is an important figure in contemporary art and lives and works in Los Angeles. His work has been featured in many gallery and institutional exhibitions including a recent two-person exhibition with Shio Kusaka at Museum Voorlinden, The Netherlands (2017); a solo presentation at The Lever House, New York (2013–14); and a monumental image covering the facade of the Museum of Contemporary Art, Los Angeles (2016–17). His work is the subject of a major upcoming solo exhibition at the Dallas Museum of Art, Dallas, in spring 2019, and he was the 2017 Honoree for the TWO x TWO for AIDS and Art, Dallas.