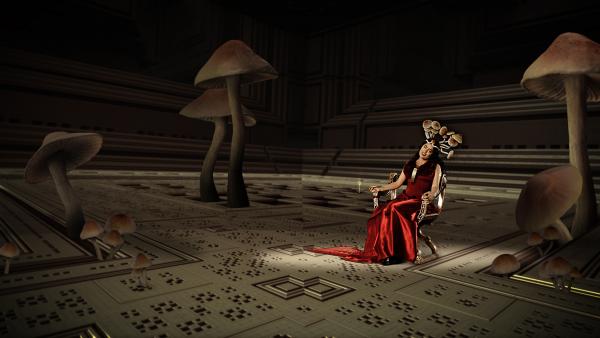 On February 15, LACMA will screen artist Martha Fiennes’s new moving-image artwork, followed by a conversation with Fiennes and actor Julian Sands. We chatted with Martha last week to learn more about her inspirations for this work.

What was your inspiration for Yugen?
My inspiration in general is everything that is not material. So the mind, the interdimensional frequencies of other unmanifested realities. We all know that we have five senses, but there’s a whole lot happening that we don’t see. And there’s a lot that has created the circumstance of our lives, and it’s connected with consciousness and how the mind works, so there’s a much vaster world out there that is not the one you see with your eyes. It’s such a vast subject matter and it covers esoteric ideas, and spiritual ideas, and metaphysics, and quantum physics, and that’s what really, deeply interests me.

What does “yugen” mean?
Yugen comes from Japanese aesthetics and it means an intrinsic or instinctive understanding of a partially perceived universe. So you get there’s a whole greater universe out there and it describes that hunch, that sense of a far richer, greater universe than the one that is the material world.

Did any of the specific interiors or patterns, etc come from places you’ve experienced, or were they all created organically for Yugen?
In the piece, data that I’ve created is being selected and it’s creating some of that data itself. So it’s all piled into the computer which is operating according to its own decisions. Sometimes we are in my version of what I call the manifested world, the three-dimensional world which is shown in its pure, natural form. It is sometimes beautiful and rich and lush, and other times it might decide to show something desolate and almost post-apocalyptic. And at other times, you’re in my expression of an interdimensional field which is described through the use of an environment that is described by using fractals.

Could you explain fractals a bit more?
In mathematics, they are basically highly visualized forms of super-complex mathematics. I would say they’re like sacred geometry, like a geometry in moving form, undulating and shifting. I think it’s very similar to the kind of Islamic art that said you can’t describe people. You can only depict god in the form of geometrical shapes. Only now can you digitally express these fractal shapes.

It’s quite mesmeric.
A lot of people say that. When you watch movies, you usually engage at quite a literal level, at the rational level of your mind. I’m really interested in how you can create moving-image work that speaks to that thing of being mesmeric, that’s like a dream, that’s in the subconscious state. They say that in the brain, it’s the prefrontal lobe cortex that deals with rationality. I’m trying to go non-prefrontal lobe cortex. The best guy who talks about this is one of my heroes, Terrance McKenna, and he was a total psychonaut. He was a total inspiration for expanded consciousness, expanded world consciousness, and I’m very interested in all kinds of ideas and the influences that create the reality and the idea of being. We are all interdimensional so we’re existing, and our souls are currently existing simultaneously on other planes. To be a human being is not just about materialism or the material world. That’s what I’m trying to stimulate. Come and go as you want and take from it what you want. But it won’t repeat, it’s not going to loop. That’s the other thing about moving-image is that it’s usually condemned to a cycle of repetition in traditional film and I’ve tried to liberate it from that. So you could say it’s a form of AI although it’s choosing and selecting from materials that I as the artist have put together. It’s a relationship with the machine.

We’re all very excited to see the piece here at LACMA.
Thank you. I’ve got a great team and Salma was amazing to work with. She’s my muse. She’s a serious inspiration as a woman and a force—an intelligent and generous visionary, highly receptive, highly creative, trusting force.

Did you have her in mind from the beginning? How did that partnership come about?
I am lucky enough to have a movie project with her that is in development. And so I thought, in the meantime, wouldn’t it be great to work with her on this moving-image art piece. So it’s still the medium of film but more about the art and less about the demands for a certain kind of receptivity by a ticket-buying public. This is an immersive simulation that is devoid of that rulebook movie making deliberately serves, so everything is an exploration and an experiment.

This conversation was edited and condensed for clarity.